Midwater trawling is a fishing practice that herds and captures the target species by towing a net through the water column.

Similar to bottom trawling, midwater trawling involves towing a large net through the water column. Trawls are designed to capture and trap the target species inside the codend as the net is hauled through the water. 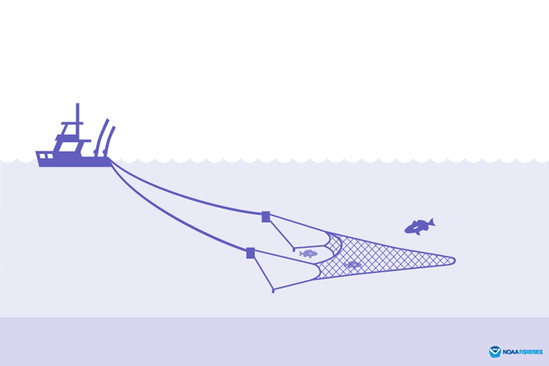 Trawl nets vary in length, mesh size, material, and tow speed depending on target species, but most are constructed of four mesh panels sewn together.

Beam trawls consist of a cone-shaped net with a horizontal opening that narrows to the codend.

Otter trawls use boards, called doors, secured at the mouth of the net to ensure that the net remains open throughout the trawl.

Sea turtles are at risk of being captured in midwater trawls as they transit from the bottom, where they rest and forage, to the surface, where they breathe.

Because turtles have lungs as humans do, the likelihood of drowning increases the longer a turtle is held underwater.

Turtles can be crushed by the weight of the catch on top of them, resulting in broken appendages or shell. Injury may also occur when the net is emptied onto the fishing vessel and turtles are dropped onto the hard deck along with the catch.

The stress of being captured can leave turtles exhausted and barely alive when they are tossed back into the water.

Many species of marine mammals forage and swim at midwater depths, putting them at a high risk of being captured or entangled in these trawls.

As marine mammals are swimming to forage and migrate, trawling vessels can entangle these animals in netting and tow lines or even cause disorientation due to vessel noise.

If small and juvenile cetaceans reach the codend of the net, they may also be able to escape through the TED if not entangled.

Mitigation measures are similar to those recommended for bottom trawling, such as reducing the number of turns per tow and tow duration.

Ongoing research is investigating how animals might behave differently when in vicinity of fishing vessels and assessing potential gear modifications that might lead to animals avoiding trawls.