We work closely with the commercial fishing industry to reduce harmful interactions with marine mammals, turtles, and other protected species. 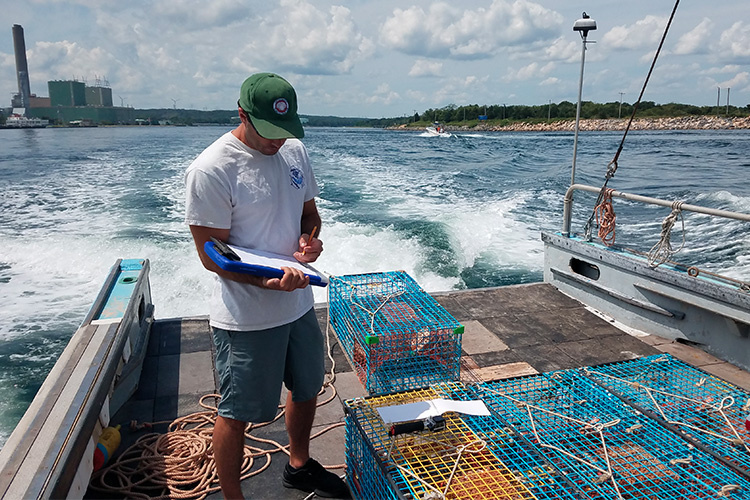 Testing gear with fishermen under actual fishing conditions is key to developing modifications that can reduce whale entanglements without significant loss of the targeted catch.

Large whales, including humpbacks and the endangered North Atlantic right whale, can become entangled in lobster and gillnet gear. NOAA Fisheries has required many changes to the gear to reduce entanglements and the injuries and deaths that may result. While these regulations have reduced this risk, some remains.

NOAA Fisheries continues to work with the fishing industry and others to find solutions that will eliminate this risk. We have built relationships with fishermen, people who manufacture on-demand systems, and environmental organizations. We are working to further develop safe and feasible fishing methods that do not use vertical lines in pot/trap and other fishing gears. 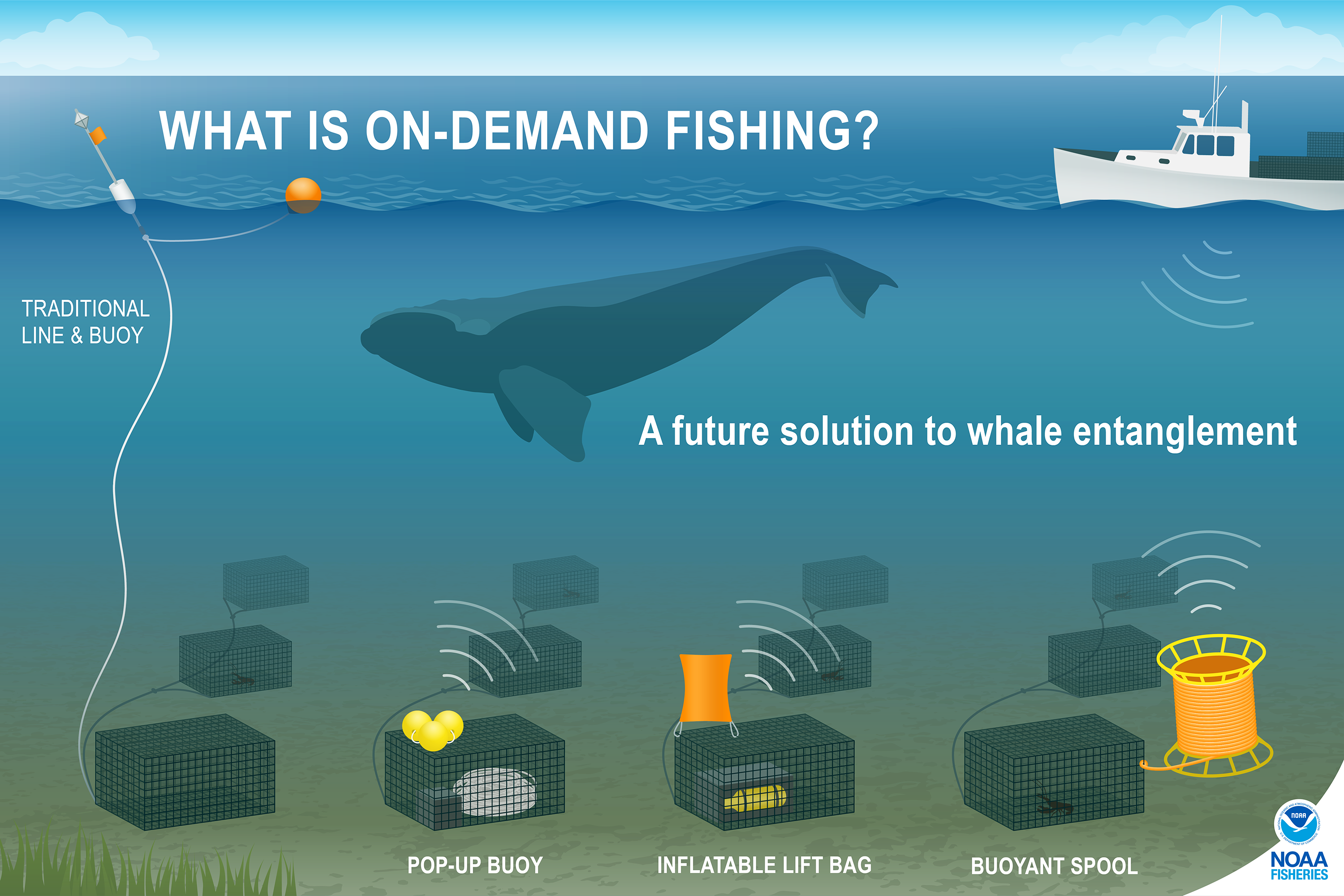 On-demand, also called “ropeless”, systems use far less rope in the water than traditional gear designs. To locate and haul (retrieve) gear, traditional methods tether gear to a rope attached to a buoy at the water’s surface. The main characteristic of on-demand gear is that it does not need this gear-to-buoy tether.

We are helping fishermen test alternatives to the buoy and line, including pop-up buoys, inflatable lift bags, and buoyant spools.

The vertical line is coiled in a cage that is on the ocean bottom attached to a string of traps. When a signal is received from the boat at the surface, the buoy or cage top is released from the cage. The line uncoils to the surface, allowing the fishing vessel to retrieve the gear.

A deflated lift bag is attached to a cage connected to a string of lobster traps. When a signal is sent from the boat, the lift bag inflates and the cage rises to the surface. This allows the fisherman to retrieve the cage and the pots that are connected to it.

Line wrapped around a buoyant spool is tethered to a weight on the bottom. When a signal is sent from the boat, the spool is released. As the spool ascends to the surface, the line unwinds from the spool. It rises to the surface where the fishing vessel can retrieve it, and the gear on the string.

To increase systems testing, we have assisted in creating a “gear library.” With the help and donations from environmental and academic organizations, we house dozens of on-demand systems from many different manufacturers. Permitted fishermen and researchers can borrow pop-up buoys, inflatable lift bags, and buoyant spools from the gear library. In return, the borrowers provide us with insights into how the gear operates on their vessel, any problems encountered, and suggestions for improving the technologies.

Federal permit holders who would like to test on-demand gear are invited to apply for an Exempted Fishing Permit. An EFP authorizes a fishing vessel to conduct fishing activities that would otherwise be prohibited under current regulations, in this case, to fish without surface marking systems. Fishermen must obtain authorization from the state (if in state waters) and/or from NOAA Fisheries (dual permitted/federal only) to fish without buoys/radar reflectors.

Find out more about these permits:

If on-demand gear is to be widely used, then we need an effective and affordable system for locating the gear. Currently, others in the area can see the surface buoys that are attached to a vertical line connected to the gear on the ocean bottom. With on-demand gear, there will need to be another way.

We’re working with our partners to develop a system that will allow all fishermen operating around a set of on-demand gear—which will not have surface buoys—to know it is there and avoid it. One of many efforts to address this is a recently conducted global technology search with NASA’s Center of Excellence for Collaborative Innovation and Yet2. They are working to identify technologies that may be able to solve these challenges. The Yet2 report on their search concluded that:

Roadmap to Wider Use of On-Demand Gear

NOAA Fisheries has issued a draft strategy, Ropeless Roadmap: A Strategy to Develop On-Demand Fishing, to guide how we approach the development of on-demand gear in the coming months and years. The draft strategy identifies the research and technology needs related to on-demand fishing and how these needs will be met. It also considers economic, safety, operational, and enforcement aspects of on-demand technology.

We recognize that there are many partners who are key to this process and strategy, particularly state fishery managers. We invite the public and our stakeholders to provide input on this document and our ongoing on-demand fishing research program.

All sea turtles in U.S. waters are listed under the Endangered Species Act and some fisheries are a significant threat to them. Our research helps find ways to modify gear so that it continues to fish well, but is less likely to catch or entangle sea turtles.

Turtle excluder devices (TEDs) are successfully used in shrimp nets to reduce the capture of sea turtles. Our trawl gear research is building on the TED model to further improve results where TEDs are now used, and to reduce sea turtle bycatch in other trawl fisheries. Our current focus is on a new design for squid trawls using a sorting grid made from cables sewn into the net. Experimental work is ongoing to test how adding the cable grid affects catch and bycatch rates, and how vessel size affects the gear’s performance.

Low profile gillnets are not required in Northeast gillnet fisheries. However, for fisheries that occur where loggerhead bycatch is a concern, this work shows a promising way to mitigate risks posed to these turtles while maintaining fish catch.
From 2012-2016, approximately 705 (141 annually) loggerhead sea turtles were bycaught in gillnet gear in the mid-Atlantic and on Georges Bank. The highest loggerhead bycatch occurred in the northern Mid-Atlantic from July to October in large mesh (7 inches or greater) gear.

We are migrating to the NEFSC publications database. Our publications can also be found in the NOAA Institutional Repository. Here is a list of…