A breakthrough in captive breeding of black abalone at NOAA Fisheries’ Southwest Fisheries Science Center promises to improve methods for spawning the endangered mollusk in the laboratory and, ultimately, to support the recovery of wild populations.

For the first time at the Southwest Fisheries Science Center, scientists induced spawning by employing two synthetic mollusk hormones to trigger the female abalone to release their eggs. Three of the abalone given the hormones released eggs, demonstrating that scientists can prompt the shellfish to reproduce in captivity. 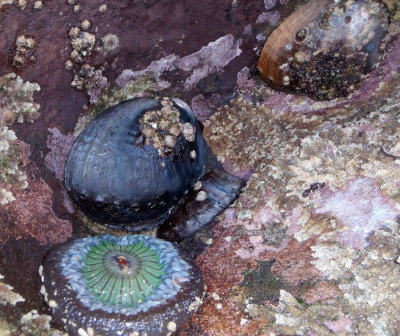 Black abalone alongside anemone in the low intertidal zone.

Black Abalone (Haliotis cracherodii) live along the West Coast in the low intertidal zone, the area above water at low tide and underwater during high tide. This location puts them at high exposure risk to stressful environmental conditions. For centuries, people have harvested the delicious shellfish, taking an additional toll on the population. These factors, along with an outbreak of Withering Syndrome in the 1980s due to exceptionally warm ocean conditions, resulted in black abalone populations plummeting. Due to this severe decline, NOAA Fisheries listed the black abalone as Endangered in January 2009.

Recovery efforts for black abalone include protecting, monitoring, and supporting wild populations. Researchers at the Southwest Fisheries Science Center, as well as several other organizations, are also developing methods to propagate the species should the populations need to be augmented by captive production in the future. While the predominant focus is to save the black abalone populations in the wild, in the event this is no longer possible, the next step would be to have a method of captive propagation. 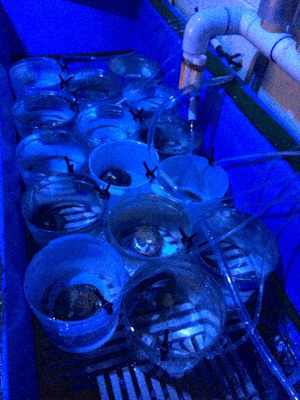 Abalone populations are “broadcast spawners,” releasing their eggs and sperm into the water to combine and produce larvae. For captive breeding, scientists must replicate the environmental conditions that stimulate the shellfish to spawn. Conventional methods that work with most abalone species are ineffective with black abalone and the species is extremely difficult to spawn in a laboratory.

“These animals are very particular and very sensitive to conditions, so it’s something of a puzzle to figure out just what will trigger them to spawn,” said John Hyde, the lead Southwest Fisheries Science Center scientist on the project. “It’s a matter of varying the conditions in just the right way to meet their needs.” The further refinement of methods to induce spawning will improve captive propagation both for commercial aquaculture, involving non-endangered species, and for restoration of other at-risk wild populations.

Read more about the Abalone Program at the Southwest Fisheries Science Center, including Abalone Genetic Research and the Abalone Aquarium.

A comprehensive NOAA Recovery Plan is nearing completion and is expected to be released in 2019. Read the 2016 Recovery Plan Outline for Black Abalone (PDF, 30 pages).