Can the Vaquita Be Saved from Extinction?

Fewer than 100 vaquita remain, making this species of porpoise the most endangered marine mammal in the world.

Can the Vaquita be Saved from Extinction?

Transcript: Can the Vaquita be Saved from Extinction?

Rich Press: Just south of the border, in the Gulf of California down in Baja, Mexico, lives the most endangered marine mammal in the world. It's called the vaquita porpoise, and it has the bad luck of being caught in gillnets that fishermen set for other species. In other words, vaquita are bycatch—the unintended victims of fishing—and this has brought vaquita to the edge of extinction. To make matters worse, much of that fishing supplies an illegal trade in wildlife parts to China.

Scientists estimate that fewer than 100 vaquita remain, and the Mexican government, with technical assistance from NOAA Fisheries, is working to protect what’s left of the species. But, will they be able to save vaquita in time?

To find out, I spoke with Barb Taylor. Dr. Taylor is a conservation biologist with NOAA’s Southwest Fisheries Science Center in La Jolla, California. She was the co-chief scientist, along with her Mexican counterpart, on an expedition last summer to estimate the number of vaquita that remain.

Barb Taylor: Well, vaquita is one of seven species of porpoises, which are not like dolphins, in that they don't have a beak. They look like a mini version of the killer whale, only they're way cuter.

They have a better paint job, for one thing. They have sort of a goth look with black lips and eye shadow. They're a very diminutive in many regards. They're the smallest porpoise or dolphin anywhere in the world. They're only about five feet long. They weigh just over a hundred pounds. And unlike their cold water cousins, they live right next to a really stunningly beautiful desert in Mexico. So, they're the only desert porpoise in the world.

And they have a really tiny distribution as well. They have the smallest distribution of any of the marine porpoises or dolphins. And they're found only in this small part in the Northern Gulf of California in Mexico.

Rich Press: In addition to being the smallest marine mammal—and, maybe like you're saying, one of the cutest—I understand that vaquita are also the most endangered marine mammal in the world. How did they get that way?

Barb Taylor: Well, there's one reason why vaquita are the most endangered marine mammal in the world, and it's gillnets. And, there are two fisheries that are the main culprits right now. One is an illegal fishery for another endangered fish called the totoaba. Then there's a legal fishery for blue shrimp, which is a giant, delicious shrimp that is exported to high-end markets in the U.S. And both of those are caught with gillnets; very different size gillnets, but it doesn't make any difference what the size of the gillnet is. Sadly, the vaquita become entangled and then drown and die.

Barb Taylor: Well, the totoaba fishery is a fascinating one. It's very intimately tied to the history of endangerment of vaquita because they're about the same size and the nets that were used to catch totoaba are the ones that cause both totoaba and vaquita to become endangered.

They basically became commercially extinct for many years. And we started hearing reports that the totoaba were recovering and coming back. Then about 2012, 2013, this enormous resurgence of the illegal fishery started up because there was a lot of money to be made in China dealing with illegal trade in the totoaba swim bladders.

Rich Press: I heard—actually, you're the one who told me—that fishermen can get up to $5,000, even $10,000, per swim bladder, and this is a part of the world where fishermen are definitely not very wealthy. They may not have very many alternatives in terms of how to make a living. So that's a temptation that must be very hard to resist.

But before we start condemning poor Mexican fishermen, the United States is not completely without guilt in this matter. You mentioned before, the blue shrimp fishery.

Barb Taylor: So blue shrimp are huge shrimp—bigger than your hand—that are the most lucrative legal fishery in the Northern Gulf. They are caught with gillnets because of the huge tides in the Northern Gulf. Most of that—about 80 percent of it—is sold in the U.S., which is one of the reasons why we've been involved in helping with testing some of the alternative gear.

So, the Mexican government, working with NOAA Fisheries, has developed a replacement for the shrimp gillnets. So they came up with a new, small-type trawl that has turtle excluder devices, fish excluder devices, and is not dangerous to vaquita. So there is alternative gear and they put all of the regulations through to switch fishermen over to that gear.

And then there was a game-changer. Totoaba came on the scene. And we went from the strategy of being able to do things gradually, to we have to do something that's really an emergency or we're gonna lose this species right now.

Rich Press: Okay. So then vaquita was already a protected species in Mexico before that. So then what happened? Mexico—the government— started taking enforcement more seriously?

Barb Taylor: Well, Mexico started taking vaquita very seriously when we had the first extinction of any dolphin or porpoise by the hand of humans in 2006. And I, sadly, was on that survey looking for the last of the Chinese river dolphins. And I can't tell you how depressing it is to go on a survey and not find any.

So it gave a new perspective to Mexico that now they were on the hot seat. They now had the most endangered marine mammal in the world. And the international recovery team reviewed the acoustic monitoring data, which was very powerful, and came back to the Mexican government and said if you don't ban gillnets, you're going to lose this species within your political administration.

And they did it. So they have a two-year ban put in place and, very importantly, they put the Mexican Navy in charge of doing enforcement in the Northern Gulf. And that has made an enormous difference.

Barb Taylor: I was the chief scientist.

Barb Taylor: I was on the boat every single day. [Laughter]

Barb Taylor: Lorenzo and I were co-chief scientists.

Rich Press: [Laughter] I got the right person.

Is there any good news out of the surveys? Is there any sense that the two-year ban is having some affect? Or, not even that?

Barb Taylor: Well, the good news from the survey is that—when we were out there, we didn't see any illegal fishing, right? So I mean, that's tremendous news. And I have to say stunningly different than our last cruise in 2008.

In 2008, it was an absolute spiderweb of nets outside the vaquita refuge. This time, it was just wide-open ocean. I mean, no one was out there. And that was stunning, really. It was an amazing thing to see a habitat that is not only not polluted and is incredibly productive, but also doesn't have these gillnets that are driving this species extinct.

Rich Press: So, one last question for you, Barb. You mentioned the example before of the river dolphin in China that did ultimately go extinct. The vaquita now is in a precarious place and we're hoping that with efforts from people here and Mexico that it won't follow the river dolphin.

Can you cite any examples of other marine mammal species that did go right up to the brink but, because of efforts of people to save them, they've recovered or—are on the way to recovery?

Barb Taylor: Oh, fortunately, we have many great examples of species that were less than 100 individuals, like the vaquitas are now, that came booming back. Probably the best one was thanks to Mexico. The northern elephant seal was probably down to maybe 30 or so individuals on Guadalupe Island. They were completely extirpated from California, and now they are well over 300,000 animals.

Rich Press: That was NOAA Fisheries conservation biologist Barb Taylor. Although vaquita are in a particularly dire situation, the problem of bycatch in gillnets is not unique to vaquita. Many other species of marine mammals around the world—and also sea turtles, sea birds, and sharks—get caught up in gillnets as well.

NOAA Fisheries is working to reduce bycatch by helping to develop alternative gears and by working with our international partners. But you, the consumer, have an important role to play as well.

You can reduce bycatch by buying sustainably caught seafood. I know it's difficult to know exactly how the shrimp or tuna or swordfish you're buying was caught, but here's a general rule of thumb—if you buy seafood caught by U.S. fishermen, you're buying seafood that was caught sustainably and under strict regulations that are meant to minimize bycatch.

So if you do that, you can enjoy your seafood, and also enjoy your peace of mind.

You can learn more about vaquita and what NOAA Fisheries is doing to protect them on our website. That's www.fisheries.noaa.gov/podcasts. You'll also find a bunch of pictures there from the survey last summer.

Thanks for listening. Join us again next time for more stories about ocean life and ocean science. I'm Rich Press, and you're listening to On the Line. 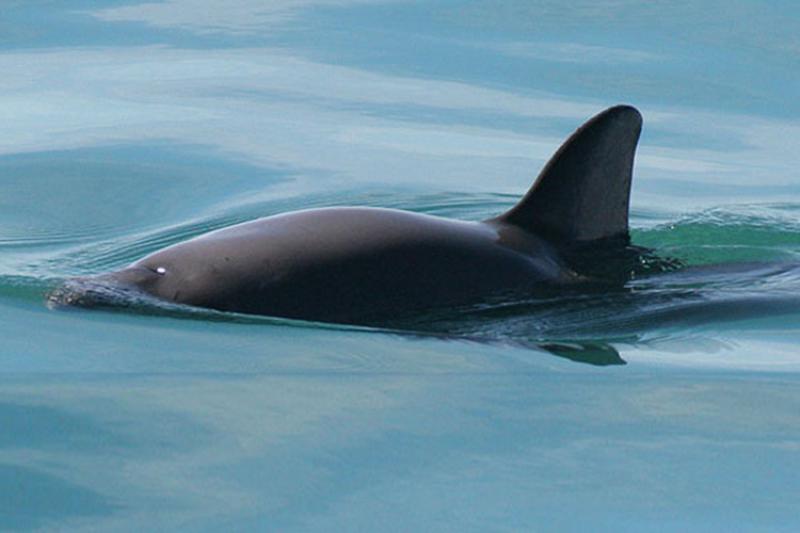 Just south of the border, in the Gulf of California down in Baja, Mexico, lives the most endangered marine mammal in the world. It's called the vaquita porpoise, and it has the bad luck of being caught in gillnets that fishermen set for other species. In other words, vaquita are bycatch—the unintended victims of fishing—and this has brought vaquita to the edge of extinction. To make matters worse, much of that fishing supplies an illegal trade in wildlife parts to China.

Scientists estimate that fewer than 100 vaquita remain, and the Mexican government, with technical assistance from NOAA Fisheries, is working to protect what’s left of the species.

Barb Taylor is a conservation biologist with NOAA’s Southwest Fisheries Science Center in La Jolla, California, and she was the co-chief scientist on an expedition last summer to estimate how many vaquita remain. In this podcast, Dr. Taylor points out that, historically, several species of marine mammals have been rescued from similarly dire straits. But time is running out for vaquita.