Saving Coho Salmon: It's All About the Timing

As NOAA biologists work to re-establish runs of coho salmon in California, they aim to bring back some of the diversity of the wild populations that once thrived there.

Saving Coho Salmon: It's All About the Timing 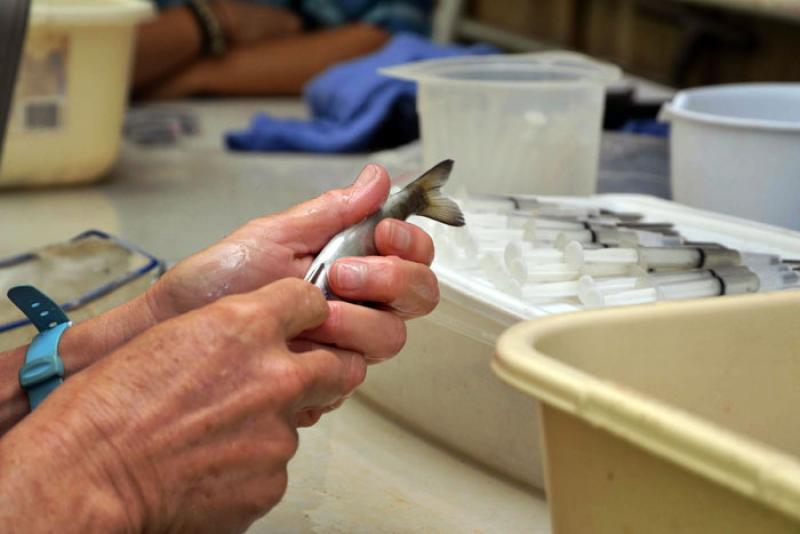 Coho salmon used to run wild in the Santa Cruz Mountains of California. But those populations of coho were listed as endangered in the 1990s, and by 2008 the wild runs had declined to critically low numbers. Today, the remnants of those populations are hanging on with the help of a fish hatchery run by the non-profit Monterey Bay Salmon and Trout Project in collaboration with scientists from the NOAA’s Southwest Fisheries Science Center and the California Department of Fish and Wildlife.

Brian Spence and Joe Kiernan, both fisheries biologists and ecologists with NOAA Fisheries, are two of the scientists working with the hatchery. Together with other biologists, their goal is to increase the chances that coho salmon will run wild in the Santa Cruz Mountains again, and to do that, they’re doing more than just hatching fish and releasing them.

In order to maximize their growth and survival, young salmon need to hit the ocean when conditions are just right. In coastal California , that would be when seasonal upwelling brings cold, nutrient-rich water to the surface. However, that window of opportunity can be brief and can vary in timing from year to year. If the coho miss it because of bad timing, fewer of them will survive.

In Canada and Alaska—the heart of coho country—the young fish migrate out to sea over a short span of time, usually about a month. But in California, which is the southern end of their natural range, coho salmon migrate over a longer period of time, typically two-to-three months. Spence and Kiernan believe that by migrating out over a longer period of time, wild coho in California are hedging their bets against unpredictable ocean conditions. Even though many fish may miss the most favorable ocean window in a given year, at least some of them will be sure to make it when conditions are optimal.

To test this hypothesis, the two scientists have designed a clever experiment. Instead of the traditional hatchery practice of releasing all the smolts over a short period of time, they’re releasing them in batches over a ten-week period. Every smolt will be tagged prior to release so that the exact timing of their outmigration can be monitored. Further, when the fish come back to spawn two years from now, the tags will allow scientists to determine which release batch they originated from. By doing this over several years, they hope to determine when the window of opportunity was opened each year. If indeed the period of favorable ocean conditions varies, then they will have demonstrated that hatchery practice—at least for coho salmon in this area—may need to change.

By releasing smolts over a longer period of time, Spence and Kiernan are doing more than simply modifying hatchery practice. They’re seeking to reintroduce some of the natural variability in outmigration timing that was present in the wild population before it gave out. As endangered populations confront climate change and other threats, that variability may increase the chances that some of them will survive.