The leatherback is a most unusual species of sea turtle. In the Pacific, it's also among the most endangered.

Scott, thanks for taking my call.

Rich Press: So, Scott, I wanted to talk to you because I want to learn about leatherbacks, and I heard you’re one of NOAA’s leatherback experts. But before we start getting into questions about their being endangered and what we can do to protect them and so on, I want to talk to you just a bit about how neat and unusual they are. So, there’s several species of sea turtles out there, but leatherbacks are kind of in a class all their own. So tell me about what sets them apart from other sea turtles.

Scott Benson: Well, what sets leatherback apart from the other turtles, first off, is that it doesn’t have a hard shell or hard carapace. It’s covered with a soft carapace that’s covered with skin essentially. So if you were to scratch with your fingernail, it would actually bleed. This is a huge animal, by far the largest of the sea turtles. We’ve actually interacted with some that were on the order of about 1,300 pounds, and about six-feet long.

It’s got tremendously long flippers that enable it to engage in one of the greatest migrations of any air-breathing aquatic vertebrate because, again, this is an animal that migrates all the way across the Pacific Ocean from the Western to the Eastern Pacific. And I can’t think of any whale species that can do anything greater than the Pacific leatherback. And this animal actually has a metabolic rate that is much different from the other sea turtles. It lies somewhere between a typical sea turtle and a marine mammal, where this animal can actually generate some of its own heat behaviorally by swimming.

So, some people like to say that the leatherback turtle is an honorary marine mammal, and we like to say, well, the marine mammals are honorary leatherbacks. But it is an unusual animal in that regard in that it can create some of its own metabolic heat, and then exist in cold water that is several degrees colder than its body temperature.

Rich Press: I know that there’s a lot of concern among scientists about how leatherback sea turtle populations are doing. I know that leatherbacks are endangered, but how endangered are they?

Rich Press: Gotcha. So let’s talk a bit about the threats that leatherbacks face, and in particular, I want to talk about the population that uses waters off the U.S. West Coast, and that’s in such rapid decline. So those turtles nest on beaches in the Western Pacific, right, in places like Papua New Guinea, and Vanuatu, and Solomon Islands. So what are some of the threats that they face at their nesting beaches out there in the Western Pacific?

Scott Benson: Yeah, the main threats the leatherbacks are facing on the nesting beach include primarily low hatchling production. So, most of those beaches, they don’t harvest animals anymore, or the eggs, at least the largest beaches. But there are problems with hatching production, meaning that we’re not seeing the output of hatchlings that we would expect to see, and that is because there are evasive species on the beaches, like pigs, feral pigs running around and digging up nests.

The incubation temperatures are very high in some places that ends up cooking the eggs in the sand. And so that requires some mitigation to provide shading or cooling of the sand to increase the hatching success. There’s also tidal inundation, erosion of the beaches that also puts clutches of eggs at risk. So, there are multiple things happening on the nesting beaches that is suppressing hatchling output at those beaches.

Rich Press: Yeah. You know the things that you mentioned, the feral pigs on the one hand, the tidal inundation, the hot temperatures on the beach – they seem like really big, actually global problems, right. It makes me think, well, evasive species, sea level rise, and climate change. So these are really big issues. What are we doing at NOAA to help our partners on that side of the Pacific to mitigate some of these problems?

Scott Benson: Well, our role right now is to provide advice and consultation. We can help them use science to guide their practices, use the best techniques available to mitigate some of these effects. However, the science, alone, is not gonna be able to solve the problem. What they’re gonna have to do is get buy-in, if you will, from the people who live on those beaches, and these are the people that live in those villages, and so forth. But this requires a holistic involvement, not just by a few individuals at these areas, but entire communities so that researchers, conservationists, and the monitors are able to do the things that need to be done to increase hatching success.

Rich Press: So, those are the threats that they face on their nesting beaches, but you also mentioned that they complete one of the longest migrations of any – I think you said any air-breathing aquatic vertebrate – all the way from the Western Pacific to the U.S. West Coast. So let’s talk about that. What are some of the threats that leatherbacks face here and along the way?

Scott Benson: Well, the other threat that’s facing – the other large threat that’s facing leatherback turtles, in addition to reproductive output, is bycatch in various fisheries across the Pacific. This is an animal now, keep in mind, that is migrating from nesting beaches on one side of the Pacific Ocean all the way over to waters off California, Oregon, and Washington. And during that trip, those animals are migrating through territories of various nations, and international high seas on their way over here.

And in all those areas, there’s lots of fishing pressure for swordfish and tuna using longlines and gillnets, where these animals can interact with these fisheries in a very negative way. We know some things about this because some of our own fisheries interact with the leatherback turtles. Longline fisheries that are based out of Hawaii, and then here in California – we have a drift gillnet fisheries. Those fisheries have been – are highly regulated and have come up with means to reduce interactions, or if interactions occur, try to see that they don’t become fatal interactions.

Rich Press: That brings me to my next question. We spoke about what we’re doing with our international partners to protect leatherbacks on their nesting beaches. We also spoke a bit about how regulations on U.S. fisheries have reduced their impact on leatherbacks. But what can consumers do? What can I do that might have a positive impact on the leatherback population, if anything?

Scott Benson: Well, I think as a consumer, I think one thing you can do is provide incentive for folks that are doing things the right way. So in this case, you can consume U.S.-caught seafood for one thing, at least that would probably the lowest-hanging fruit that’s available to you. U.S. fisheries, with regard to swordfish, do a very good job and have a very low impact on leatherback turtles. If the other fisheries around the Pacific were able to achieve a similar result, I would feel pretty good about the prospect for leatherback turtles.

Rich Press: All right. Well, it sounds like we’ve got our work cut out for us, but I’m glad to hear that not all hope is lost. I’m also glad to hear that there’s something I could do as a consumer, perhaps a little bit to help improve the situation. Scott, thanks so much for talking to us today.

Happy Sea Turtle Day, everybody. I’m Rich Press, and you’re listening to On the Line. 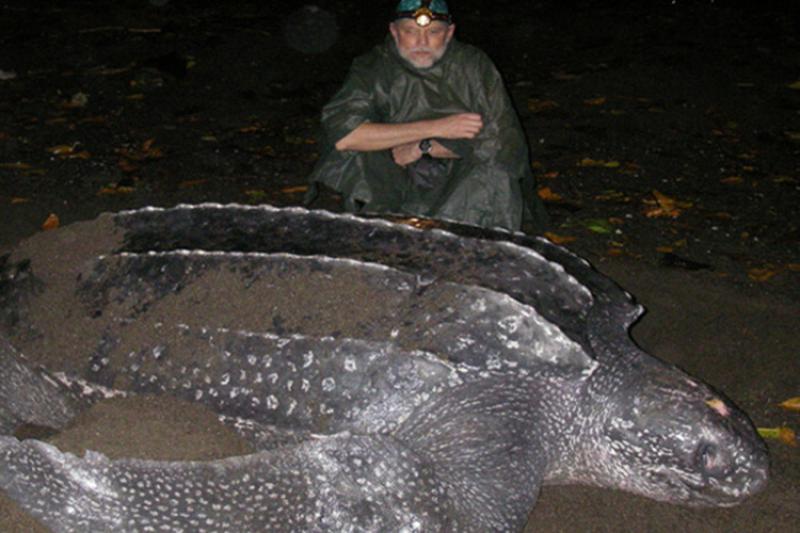 Every June 16 we celebrate World Sea Turtle Day. Maybe you’re a big sea turtle fan and you’ve been anxiously awaiting this day all year. Or maybe you’ve never heard of sea turtle day. Well, for us here at NOAA Fisheries, Sea Turtle Day is a big deal because we work to conserve and recover sea turtle populations all along our coasts and in many parts of the world.

In celebration of Sea Turtle Day, today’s podcast is about leatherback sea turtles. Leatherbacks are the largest species of sea turtle out there, and they migrate farther than any other. And in the Pacific Ocean, they’re also among the most endangered.

In this interview, Benson discusses some of the threats that leatherbacks face and what scientists, conservationists, and fishermen are doing to address those threats. He also explains what measures you as a consumer can take to help protect leatherback sea turtles.