The Summer 2016 California Current Ecosystem Survey will assess the biomasses, distributions, and biological compositions of sardine, anchovy, and other Coastal Pelagic Species populations in U.S. and Canadian waters off the Pacific coast.

The ship’s dynamic positioning system was calibrated and tuned, and operators were trained. Surveys of fish and bathymetry were conducted at Del Mar and Forty-Three Fathom Bank sites. Equipment was calibrated and evaluated for noise, non-linear effects, cross-talk, and resolving fish close to the seabed. The remotely operated vehicle was tested with new stereo cameras and multibeam sonar, for monitoring the diel vertical migrations of the deep scattering layer and rockfishes. The sites of lost instrument packages (fish tracking and HARP arrays) were located acoustically, and recoveries were attempted with the remotely operated vehicle. Remotely operated vehicle transect-length measurements were calibrated relative to a known-length pipeline (Point Loma outfall).

Prior to the beginning of leg 5, Southwest Fisheries Science Center scientists and researchers from Scripps Institution of Oceanography collaboratively conducted a variety of experiments with the state- of-the-art acoustic instrumentation aboard FSV Reuben Lasker. The principal aim was to cooperatively conduct research to expedite surveys and advance fisheries science using echosounders and, optical instrumentation (stereo and HD-video cameras), and a remotely operated vehicle. Additionally, observations were made of mesopelagic and demersal fishes and their habitats, and instrumented landers were recovered and deployed. The results of this collaborative work was then followed by at-sea work from September 19-23.

Saturday, September 17, NOAA Ship Reuben Lasker will arrive in San Diego after spending nearly three months surveying the coastal pelagic species community of the California Current, from northern Vancouver Island to San Diego. With just one day of sampling left, the survey collected acoustic and oceanographic data along more than 4500 nautical miles of east-west transects. The continuous underway fish egg sampler pumped and filtered in excess of 6.8 million gallons of water, generating 1377 thirty-minute long samples. All together 119 trawls caught 11 tons of target coastal pelagic species. Thousands of fish were measured and weighed. Twenty-five hundred otoliths and 700 ovaries were collected for assessing the fishes’ age and maturity, respectively. The data collected on this survey will be used for the assessment of multiple fish species, including Pacific sardine and Northern anchovy.

The NOAA Ship Reuben Lasker departed from San Diego on Tuesday, September 6, for the 4th leg of the 2016 California Current Ecosystem Survey. The ship began sampling off Santa Barbara and is scheduled to survey the Southern California Bight until September 17. Progress has been good, and the fair weather allowed the sampling of the shallow regions of the Northern Channel Islands. Acoustic backscatter has been dominated by rockfishes. Epipelagic echoes have been infrequent. The Continuous Underway Fish Egg Sampler egg pump samples have been mostly comprised of coastal flat fish eggs and a fair amount of sardine eggs. So far, night-time trawls caught anchovy, pacific and jack mackerel, and market squid.

During week two of the summer California Current Ecosystem/coastal pelagic species survey, NOAA Ship Reuben Lasker completed transects 89 through 101. In all, Leg 3 surveying covered transects 71 through 101, from latitude 39.1° to 34.0° north. All compulsory and two additional transects were surveyed in the portion covered this week. Underway CTDs (conductivity, temperature, depth) were collected during daytime with only a few cancelled because of seas. Nighttime operations included one ‘side op’ station per night to deploy CTD, pairovet and bongo nets, followed by one to three surface trawls. While three trawls were always the goal, transit distances to acoustic targets and weather sometimes limited the fishing effort to one or two trawls. 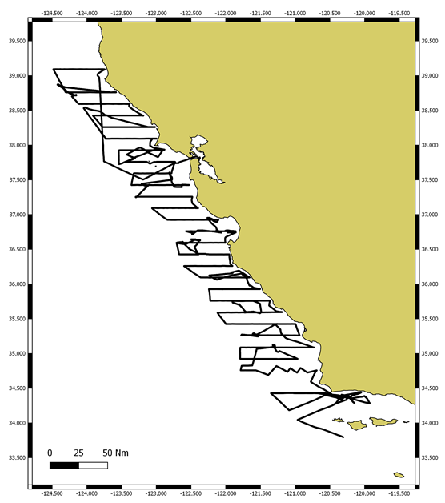 Winds were high this week and sea states slowed the progress during the last three days. Thus, trawls could not be deployed or had to be aborted in some desired areas because of poor conditions. For the previous two nights, we were forced to fish south-southeast of Point Conception near the northern Channel Islands. Notable trawl catches this week include last night’s collection of young-of-year anchovies; anchovies and market squid from the Santa Barbara Channel area; saury from offshore. Additionally, relatively large numbers of anchovies were caught in the vicinity of transects 91 and 92 where signs of fish were frequent in the acoustic data.

Leg 3 surveying operations ceased today, and the vessel is heading back to San Diego. Despite some necessary in-port work, the ship is expected to be ready to sail on Monday, September 5, for Leg 4. 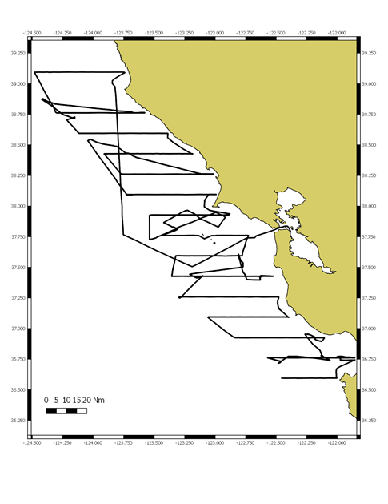 In the beginning of the leg, the main catches included various coastal pelagic species: sardine, Pacific mackerel, jack mackerel, squid, and anchovy. Later, in transects 81-87, the catch became more prominent with red crabs, pyrosomes, salps, and only small amounts of squid and jack mackerel; one Mola mola was also caught alive and released. Surveying of transect 85 was stalled temporarily because of whale watching vessels in the direct path. There were many humpbacks and fin or blue whales spouting, with some humpbacks breaching in the vicinity. A couple of mammal whistles were heard and recorded by the passive acoustic system.

Keel-camera note: The “keel camera” mounted on the bottom of the centerboard, is now producing some decent, nearly unblurred images for animals within the focused field at a fairly short range with daytime, ambient light. We have captured images of krill, salps, and a heteropod at full, 10-kt survey speed.

The first leg of the 2016 California Current Ecosystem Survey will end in Newport, Oregon, on July 22. After the transit from San Diego to the north end of Vancouver Island, British Columbia, the survey began on July 5 and is progressing southward. To date, 19 CTDs (conductivity, temperature, depth), 74 underway CTDs (UCTDs), and 34 Nordic trawls have been conducted. A total of 34 acoustic transects, totaling ~3,000 nmi (including transits), have been completed between the north end of Vancouver Island, British Columbia and Nestucca Bay, Oregon. Several distinct water masses have been encountered, as indicated by Temperature-Salinity plots. Low-salinity surface water (green dots) is indicative of the river output. The black line indicates the ship’s progress during leg 1. 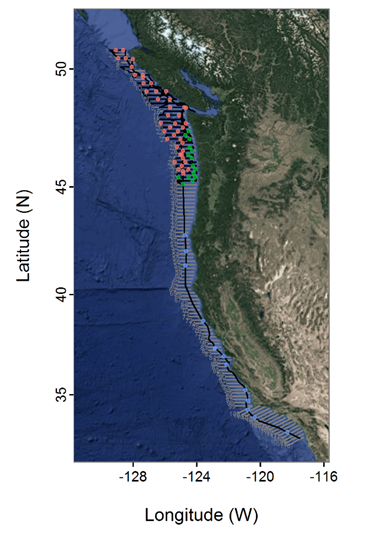 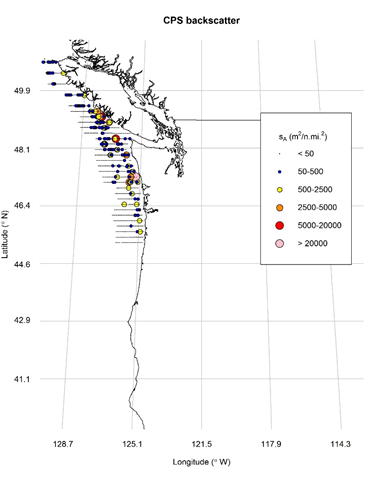 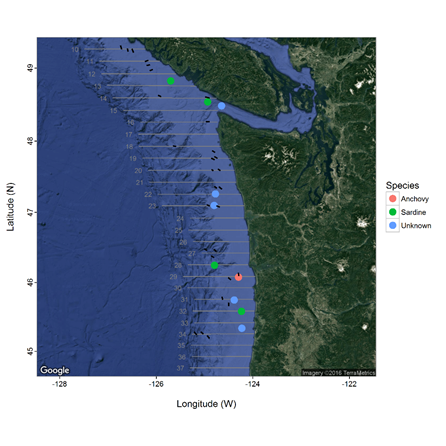 As the 2016 California Current Ecosystem survey begins its third week at sea, trawl catches continue to be relatively small with occasional landings of coastal pelagic species as we leave Canadian waters and enter the coastal waters off Washington State. A total of 21 surface trawls have been completed with only a single trawl (haul 8) off of the Canadian coast landing Pacific sardine. In addition, seven trawls have captured Northern anchovy, three trawls for Pacific mackerel, four trawls of jack mackerel, and five trawls of market squid. In addition, Pacific hake and Pacific herring have also been caught consistently throughout leg 1.

Inclement weather has plagued the survey on several occasions and in the case of July 15 operations, caused station activities to be aborted early and necessitated the ship to proceed to the next transect. Northern anchovies have been showing up close inshore along the Washington coast as seen in Continuous Underway Fish Egg Sampler samples as well as trawl landings. The vessel conducted a scheduled personnel exchange on July 16 by small boat in Westport, Washington. Leg 2 is scheduled to depart Newport on July 25, 2016.

The acoustic portion of the survey has completed 1900nm of Transit from Cape Scott, at the NW corner of Vancouver Island, BC, to just north of Grays Harbor, WA. The survey has now entered the area of 10nm Transect Line spacing.

Data processing of the EK60 has been completed for all of the Acoustic Transects to date. A total of 47 Underway CTD casts (conductivity, temperature, depth; UCTD) and 24 CTD stations have been completed and processed to provide data to construct a 3D structure of the water column and to provide biological oceanographic data.

After departing San Diego on June 28, the vessel arrived in Neah Bay, WA, on July 4 for a personnel transfer.

The vessel departed Neah Bay, WA, on July 4 and made the transit to Cape Scott at the NW corner of Vancouver Island, BC, Canada to begin Transect 001 of the Summer California Current Ecosystem Survey. Transect Line 001 began on July 6, 2016. The first trawl of the survey landed a 250 kg Mola mola which had become lodged in the marine mammal excluder device. The crew was able to extract the Mola from the trawl with little or no injury and release it overboard. Up to this point the catches have been relatively light with the scyphozoan Lion’s mane (Cyanea capillata) and Moon jelly (Aurelia aurita) being the most abundant organism present. Small catches of juvenile rockfish, juvenile and adult salmon, Pacific herring, and jack mackerel have also been present in the trawls.

The weather was inclement again on July 7. On July 8, under favorable weather conditions, NOAA Ship Reuben Lasker approached the nearshore end of Transect 011. The vessel is scheduled to pull into Neah Bay, WA, to bring Rapp-Hydema and ABS personnel on board to conduct repairs/adjustments to the Pentagon trawl systems which has been malfunctioning during portions of leg 1. The cruise continues until September 22, and will span the coastal California Current from Vancouver Island to San Diego.

Acoustic transects are conducted during daylight hours continuously collecting data. Underway CTDs (conductivity, temperature, depth) are cast 2-3 times per transect line. Data is also collected from a centerboard mounted camera and sound speed sensor. Signals from three hull-mounted hydrophone are recorded throughout the cruise. Continuous Underway Fish Egg Sampler samples are collected every 30 minutes during daylight hours. Acoustic transect lines are broken at sunset, when samples are taken with the CTD and rosette, Bongo nets, and a Pairovet net.

Three trawls are conducted each night between sunset and sunrise, with locations based upon the acoustic observations of Coastal Pelagic Species made during the daytime acoustic transects. Cameras and lights, randomly with either white or red lights, are deployed in the nighttime trawls for visually evaluating catch selectivity, marine mammal excluder performance, and net operation.

The NOAA Ship Reuben Lasker departed the NOAA pier in San Diego, CA, on June 28, to begin the California Current Ecosystem Survey, an acoustic/trawl survey of coastal pelagic species. The first scheduled in-port is on July 4 at Neah Bay, WA, when researchers will begin sampling during Leg 1 off Vancouver, British Columbia. The survey will last ~80 d and aims to survey populations of coastal pelagic species (primarily sardines, mackerels, and anchovies).

As they transit, researchers will be conducting underway CTD (conductivity, temperature, depth) casts, and collecting water samples for harmful algal bloom (HAB) species from flow-through seawater and CTD rosette casts. LCDR Sam Greenaway (Office of Coast Survey) is working to integrate Hypack survey navigation software with the ME70 multibeam echosounder to facilitate bathymetric mapping of the seabed for fisheries purposes. Kevin Stierhoff and Louis Demer from Southwest Fisheries Science Center will be conducting acoustic measurements for the California Current Ecosystem Survey and ensuring systems are operational prior to beginning the survey work

While the ship is scheduled to arrive in Neah Bay on July 4 for personnel exchanges, strong northwesterly winds between San Francisco and Cape Mendocino have impeded their progress significantly. Leg 1 of this survey is scheduled to cover the area from the northern point of Vancouver Island, BC, to Newport, OR, and arrive in Newport on July 22, 2016.

The California Current Ecosystem Survey (CCES) is the product of two previous surveys, SaKe (Sardine and Hake Survey) and the Coastwide Sardine Survey, which now encompasses all CPS in the Pacific Ocean from Canada to Mexico.