Acoustic echosounders are an essential part of our survey, the 2019 Integrated Ecosystem and Pacific Hake Acoustic-Trawl Survey. Without acoustics, we wouldn't be able to identify potential Pacific Hake aggregations that we then validate by trawling.

The NOAA Ship Bell M. Shimada is equipped with five downward-facing transducers (frequencies: 18, 38, 70, 120 and 200 kHz) located on the retractable centerboard of the ship-- during our survey, the transducers are 9.15 m below the surface of the water. These transducers generate brief, narrow-beam pulses of sound (pings) at regular intervals that travel down through the water column.

When the sound waves encounter an object (e.g., a fish) that is of a different acoustic impedance (a product of density and sound speed) than that of the surrounding medium (seawater), the sound bounces off the object (echo) and is returned the transducer. These echoes are displayed as echograms at the five frequencies, and provide us with information on the size and nature of objects in the water column. The higher frequencies (120 and 200 kHz) help us identify smaller organisms such as zooplankton or krill, and the 18, 38, and 120 kHz echosounders are very useful for Pacific Hake. We not only look at the echoes on the various frequencies, we also look at attributes such as the shape and location of the echoes to determine whether we're looking at Pacific Hake, rockfish, or any other organisms.

Together, the acoustic systems and trawling work in harmony to provide the data necessary to determine the presence, biomass, and ages of Pacific Hake along the west coasts of the U.S. and Canada.

Transceiver: a device comprised of both a transmitter and a receiver

Transducer:  a device to convert electrical power to acoustic power and vice versa.

Transmitter:  takes electrical energy and converts it into a high frequency sound from a transceiver, generating a sound wave (= pings)

Ping: a brief, focused pulse of sound sent into the water

Ping rate: the rate at which the pings are emitted into the water column

Echo: the returning sound wave from an object. These echoes provide information on acoustic signatures of targets of interest, including their size, location, and biological characteristics (abundance and biomass) 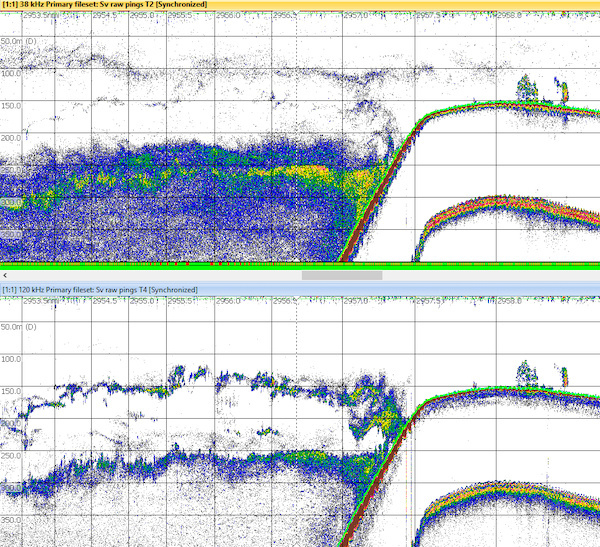 Echogram images of the EK60 showing the 38 kHz (top) and 120 kHz (bottom). An aggregation of hake trail off the continental slope, with the greatest acoustic intensity (especially at 38 kHz) at the inshore end, beginning at ~250 m depth. Up on the shallow, flat shelf are aggregations of rockfish extending ~40 m up off the seafloor (seen as bright green line). Above the hake aggregation (and stronger at 120 kHz) are euphausiids (krill). Photo: NOAA Fisheries