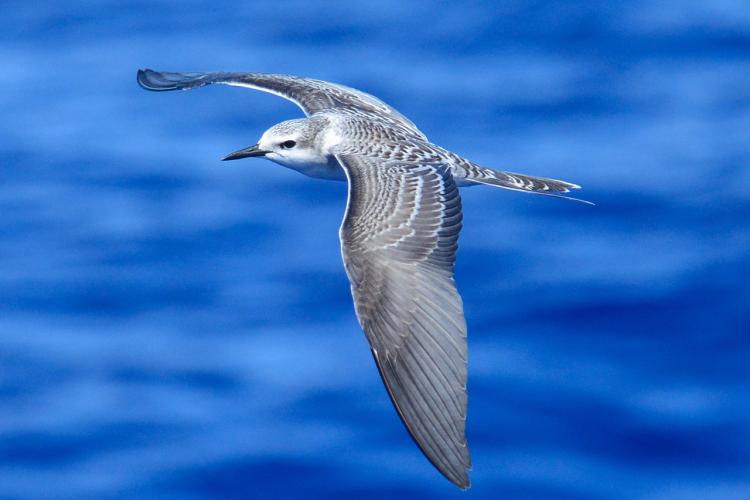 While the Hawaiian Islands Cetacean and Ecosystem Assessment Survey (HICEAS) focuses on determining the size, structure, and habitat of cetacean (whale and dolphin) populations in Hawaiian waters, we have our eyes on more than just marine mammals. Specifically, we are also keeping track of seabirds in our study area. The occurrence, diversity, and abundance of seabirds are important indicators of ocean conditions, which we can use to better understand not only cetacean habitat but also ecosystem health. How do we survey for seabirds, and what is life like for a seabird observer? To find out, we sat down with HICEAS Seabird Observer, Dawn Breese, who kindly shared her expertise and experiences with us.

How long have you been a bird observer?
I’ve been watching birds pretty much forever. My parents instilled a love of animals in me at a very early age. My first NOAA research cruise was as a volunteer seabird observer in 1986 on the NOAA Ship David Starr Jordan. We went from San Diego, CA, to Manzanillo, Mexico, and many of the seabirds were new to me.

Have you been on any research cruises like this before? How many? Do you enjoy them?
Yes! I love them! This is my third time participating in HICEAS (2002, 2010, and now 2017). I have also worked in the Antarctic, Alaska, the Eastern Tropical Pacific, and the California Current. I’ve probably done 30 or so seabird cruises.

Why are YOU interested in birds and why should WE (everyone else) be interested in them? How are they beneficial to the environment?
I have always been attracted to birds because of their beauty and grace. Some are outrageously colorful, and, they can fly! Their behavior is fascinating, and they are fun to watch. Being outside, be it on land or at sea, makes us feel good. Watching birds in our yard, a city park, a wilderness area, or on the water helps us gain knowledge by simply observing. Land birds are beneficial to the environment most notably by eating insects that destroy crops and invade trees. Seabird colonies provide fertilizer from their guano (poop) that enriches the marine environment all the way up the food chain.

Has climate change affected seabirds in any way? How?
As the ocean warms, prey species and seabird distribution changes. A stark example of this was “The Blob” of warm water that affected the eastern North Pacific in the fall of 2014. By October 2014, the entire Northeast Pacific from Alaska all the way down to Mexico had temperatures that were 5-6 degrees Fahrenheit warmer than usual. Concurrent with the temperature increase, was an influx of Brown Boobies, a tropical seabird with a normal range in the eastern Pacific north to Mexico. In the fall of 2014, this species was found in California, Oregon, Washington, and British Columbia – one was even found all the way up in Sitka, Alaska! Locally, the effects of sea-level rise on hundreds of thousands of seabirds nesting in the low-lying atolls of the Papahānaumokuākea Marine National Monument could potentially be devastating. The habitat of birds that nest in burrows, such as Bonin Petrels and Wedge-tailed Shearwaters, could be flooded. Even the Laysan and Black-footed Albatrosses, which nest on the limited space available on the atolls, are vulnerable to shrinking habitat as sea levels rise. 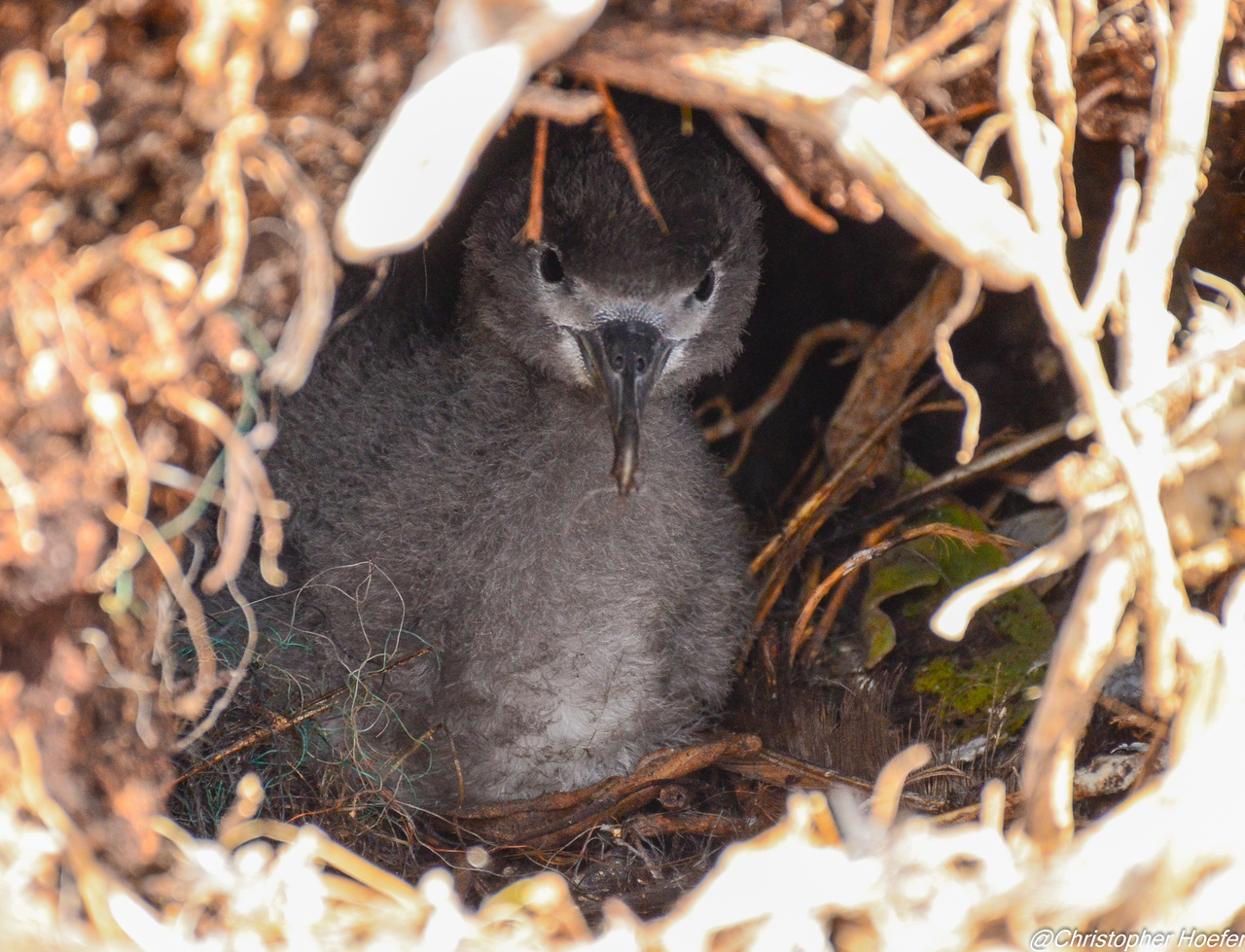 How do you prepare for a research cruise of this size?
As mundane as it sounds, automatic bill pay and a mail hold are among the most important things I set up before going on a long cruise. I’m going to another project immediately after HICEAS, so I will be away from home from July to mid-November. We have email on the ship, so we can be in contact with family and friends while away for such a long time. In terms of packing, both projects are in warm areas so clothes and other essentials are the same for each area. The ship has laundry facilities so a week’s worth of clothes is about right. The most weight in my gear is definitely books. I like to have field guides of all types, as well as history books of the area. One huge area of preparation falls on HICEAS Co-Coordinator, Annette Henry, at the Southwest Fisheries Science Center. She takes care of sending all the computer equipment and supplies the seabird observers need.

What kind of equipment do you use on the ship?
The most important piece of equipment we use is a pair of binoculars. My personal binoculars are 10-power, the project provides handheld 20-power binoculars with an image stabilizer we call the “Little Eyes,” and mounted on hydraulic stands are four pair of 25-power “Big Eyes” that are used by the cetacean and seabird observers. We use the Big Eyes to count flocks that are far from the ship. All of our data are collected directly on a computer in real time. So, our next most important piece of equipment is our computer! Being in the elements means we have to be very conscious to protect it from sun, salt spray, and rain. We have a waterproof box the monitor, keyboard, and track pad live in, and they are connected to the main computer down in the ship’s lab. We have bird field guides handy for reference. And two must haves are sunscreen and plenty of water! 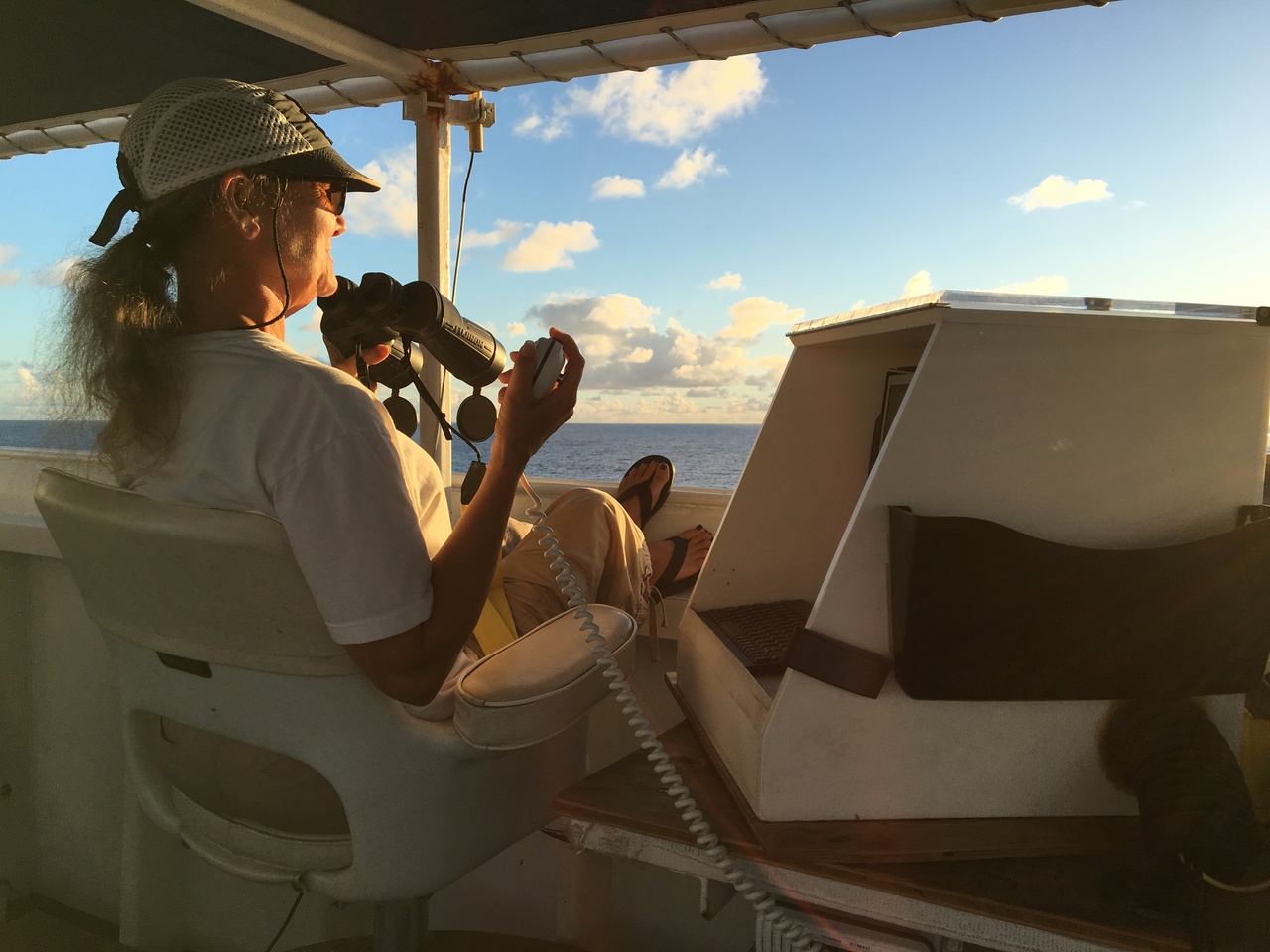 What are your responsibilities on the ship? What do you do on a daily basis on the ship?
In terms of responsibilities, I share my job with another seabird observer. We both make sure that we cover the seabird observation duties from sunrise to sunset, weather permitting. We alternate the early shift each day so no one has to always start at sunrise. My daily “commute” is up a few decks to the flying bridge, which is the deck above the bridge. The strip transect we cover daily is 300 meters from the bow to 90 degrees on either the port or starboard side, whichever has the best viewing conditions. Glare from the sun has the most impact on the side we watch. We are each “on effort” for two hours at a time, and then get a break to rest our eyes and refresh our energy! Meal times are fixed, so our shift change works out so we can each get meals. 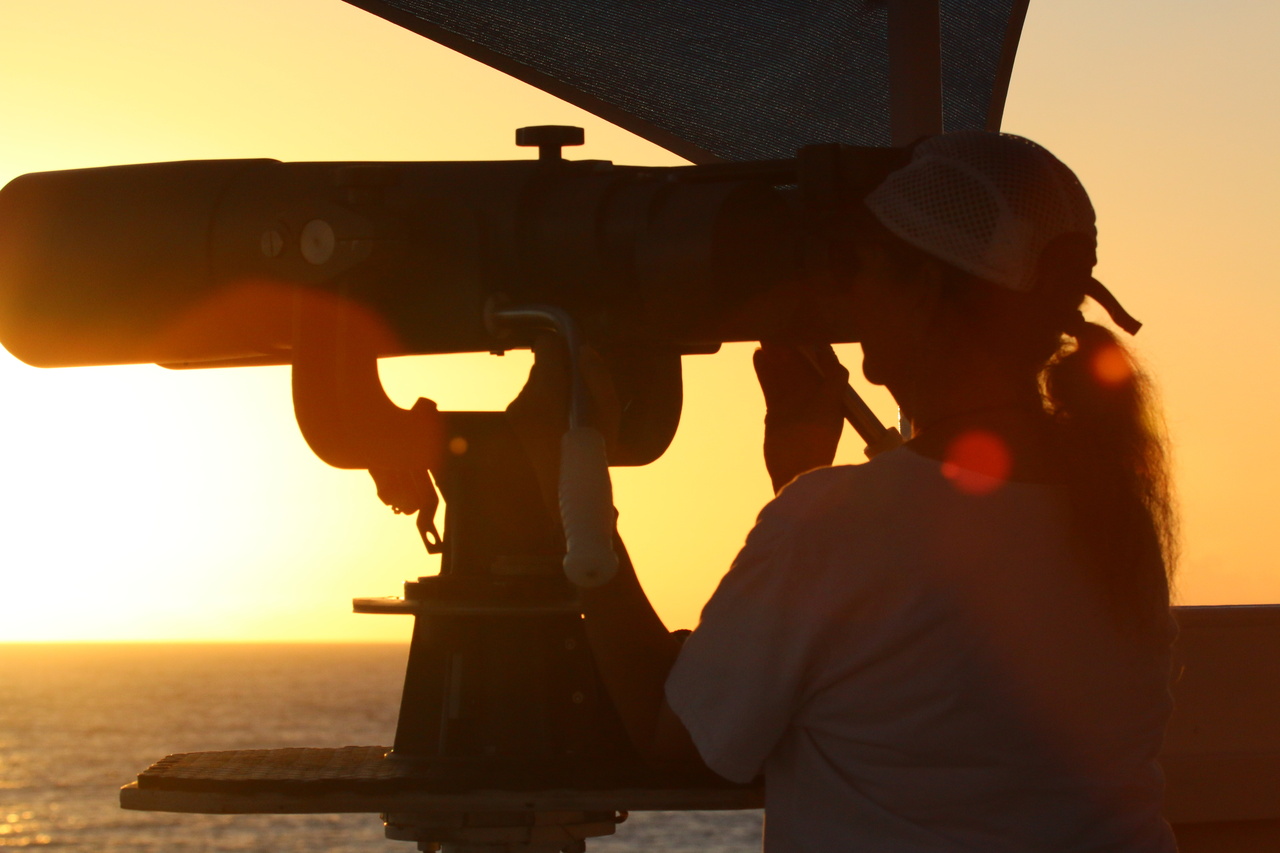 When the cetacean observers have a sighting, we typically go “off effort” and help them locate animals and take photos and biopsy samples. Once the sighting is complete, we go back to our seabird transect duties. As the cetacean observers scan with their Big Eyes, they let us know when they see feeding flocks of seabirds. We then look through another pair of Big Eyes and count the individuals and species in each flock. Sometimes, the flock is associated with a cetacean sighting so we coordinate our time, GPS position, and flock birds to match the cetacean sighting exactly so that these data can be analyzed together. Some cetaceans and seabirds are regularly found together (for example, False Killer Whales and Wedge-tailed Shearwaters), and some are not associated at all. At the end of the day, we head down to the lab to edit and back-up the data. The sunsets at sea are the best, and if I am on the closing shift, I enjoy the sunset and watch for the green flash before heading down to do the nightly data edit. 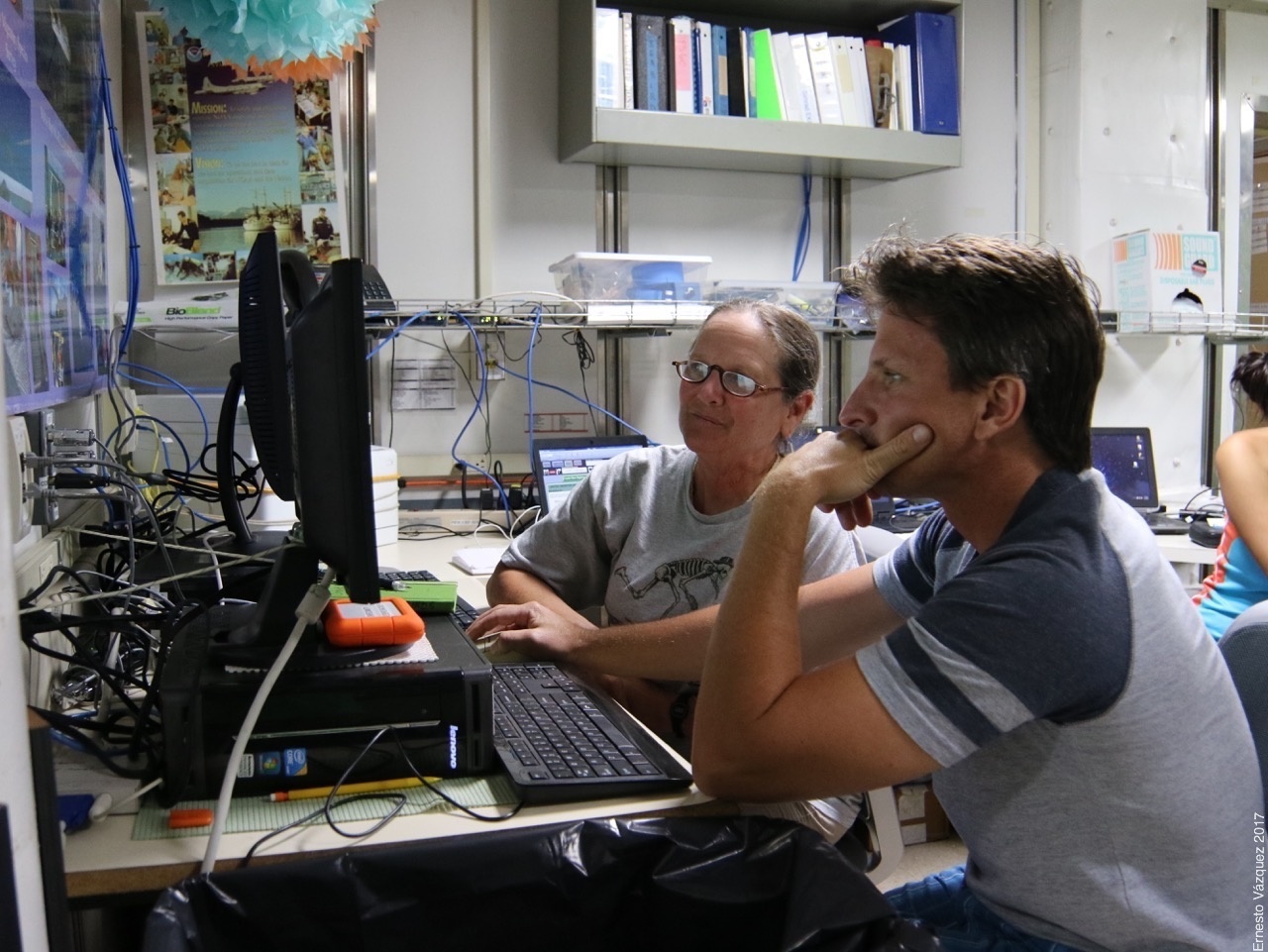 Dawn and fellow HICEAS Seabird Observer Christopher Hoefer work on editing and backing up a day’s worth of data. Credit: NOAA Fisheries/Ernesto Vásquez

What did you see and learn during your time participating in HICEAS 2017?
From the NOAA Ship Oscar Elton Sette, we saw a total of 45 bird species, including 23 seabirds that breed either in the main or Northwestern Hawaiian Islands. Twenty-one were migrants that spend time feeding in Hawaiian waters, are transiting through, or, in the case of shorebirds, spending the winter. And last but not least, on our very first day, we saw one of our oddest sightings of all, 22 miles southwest of Ni`ihau, we saw a very lost Japanese Quail, a species introduced to Hawaii in the 1930s. We learned that seabirds are highly mobile creatures, and their at-sea distributions in Hawaii are not as well understood as we think. Questions will always remain about the mysterious realm of the ocean and its inhabitants! 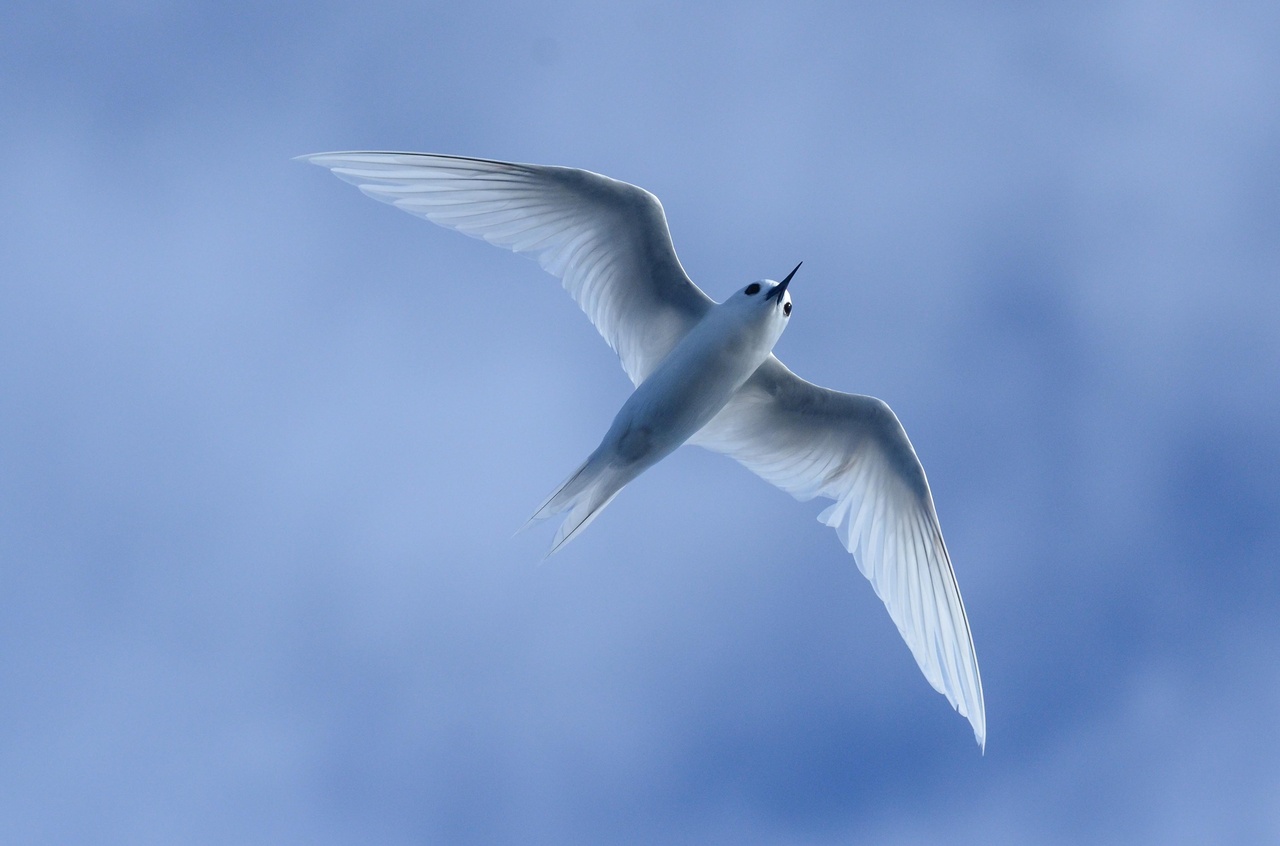 What were some highlights or favorite moments of the survey?
Seeing one of the most amazing bird migrations on the planet, the flight of tens of thousands of Short-tailed Shearwaters headed to their breeding grounds in Australia! The spectacle of the sky being darkened with clouds of birds harkened back to the days when nature writers described wetlands with clouds of waterfowl blotting out the sun! At one point, we averaged 1.5 birds per second going through our 300 meter survey strip!

Our entertainment on the flying bridge is watching Red-footed Boobies. They perch on the jackstaff (a very tall pole on the bow of the ship) or glide just above our bow and watch with their incredible eyes for flying fish kicked up by the ship. It is a treat to watch them chase and sometimes catch these fish. They’ll also perch on the jackstaff and jockey for position to roost. It’s not unusual to have four or five of them perched at a time. They spend hours and sometimes days with us! We enjoy it, but the ship’s crew thinks otherwise as they are the ones that have to scrub the decks of guano.

Also, flying squid! For years I’ve read about flying squid being one of the principal food items for seabirds in Hawaiian waters, yet I had never seen one. This cruise changed that completely! We are used to seeing flying fish flush away from the ship, but one day they looked really different. There were “wings” in the front and the back! Looking closer, we could see the back “wings” were spread tentacles! Sheets of squid were being flushed up and chased by Red-footed Boobies! At last, the elusive flying squid! It was truly an honor to participate in HICEAS 2017. Wonderful people with exceptional skills. Thanks all around to the scientists, the birds, the marine mammals and the crew of the great Oscar Elton Sette! 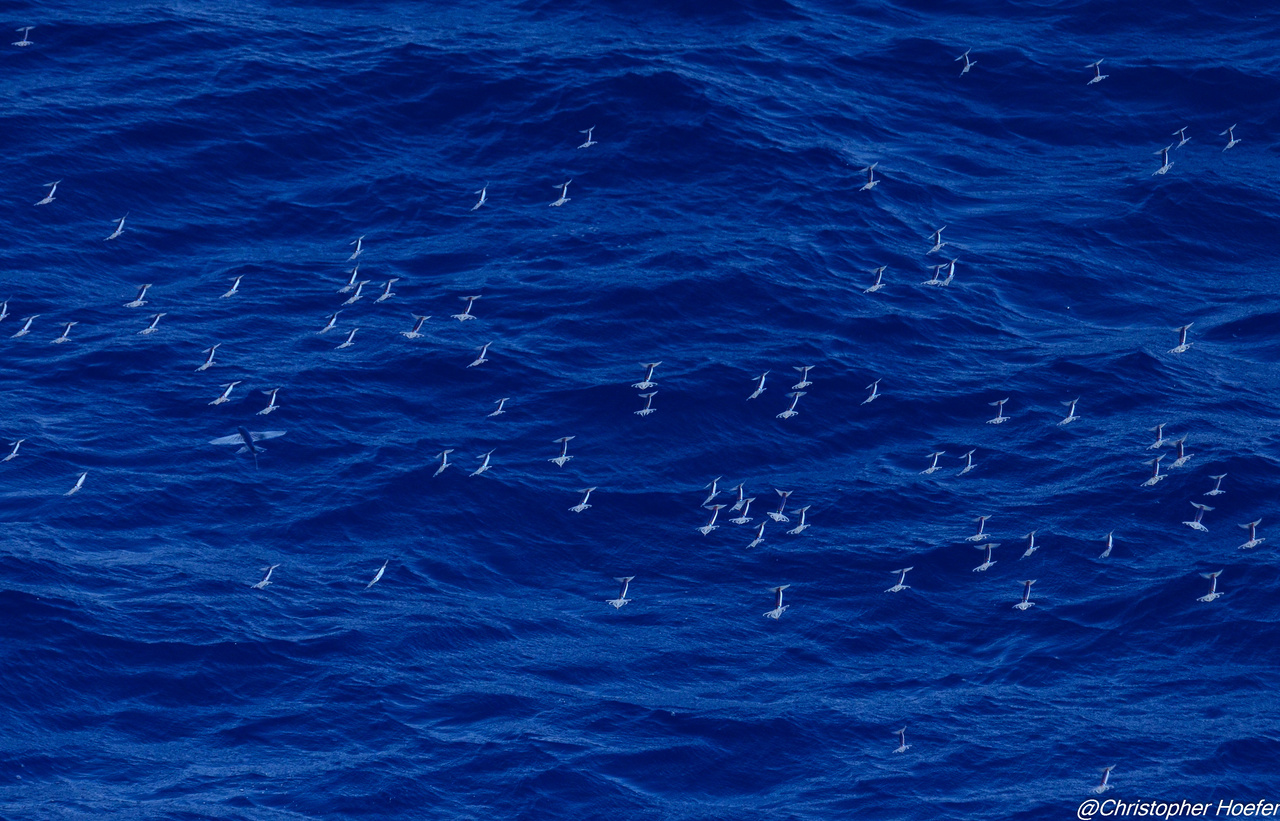 Is there anything you’d like us to know about birds that we haven’t asked you about? Any fun facts?
White (Fairy) Terns have long been present in small numbers in Honolulu. If you see a pure white bird in Waikīkī, Kapiolani Park, or downtown, look carefully. There’s a good chance it’s not a pigeon, but is in fact a native Hawaiian seabird! This year, a pair was found nesting on the Honolulu Museum of Art building, and a long-scheduled painting project was halted until the young were fledged! You can see seabirds from shore at many places in the main islands. On O`ahu, Makapu`u Point, Lānai Lookout, and Ka`ena Point are good places to look. On the Big Island, if you have a spotting scope, Kēōkea Park in North Kohala is a good place to watch for rarer seabirds. It’s always a good idea to investigate your local Audubon Society. Hawai`i Audubon Society has field trips (sometimes to places closed to the general public), service projects, and talks by local bird experts.

Thank you so much for your time and insight, Dawn. We appreciate the countless hours you and your fellow HICEAS Seabird Observers (Christopher Hoefer on the Sette, Michael Force and Andy Bankert on the Reuben Lasker) have spent in observation!

What’s happening next on HICEAS: find out!

Previous: Adrift at Sea Next: HICEAS Halfway: Two Ships Keep Up the Momentum Surveying for Whales and Dolphins Around Hawaiʻi