HICEAS Halfway: Two Ships Keep Up the Momentum Surveying for Whales and Dolphins Around Hawaiʻi

Researchers continue to study cetaceans around the Hawaiian Islands during a six-month project. 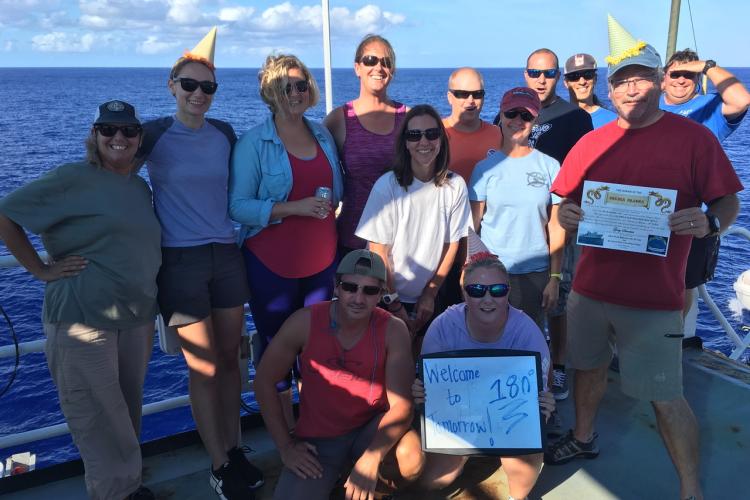 Following up on the last progress report of the Hawaiian Islands Cetacean and Ecosystem Assessment Survey (HICEAS) of 2017, we have completed another leg of survey effort aboard the two NOAA Ships, the Oscar Elton Sette and the Rueben Lasker. After six days in port in Honolulu, scientists aboard the two ships resumed surveying for cetaceans (whales and dolphins) on September 11. The two ships tackled different parts of the study area, but both returned to Honolulu on October 10. Given that HICEAS 2017 began on July 6 and ends on December 9, this part of the effort marked the halfway point for HICEAS!  We were excited to mark this milestone and would like to tell you more about our trip on the Sette (Cruise Leader: Marie) and the Lasker (Cruise Leader: Eric).

Aboard the Sette, we started by releasing three Drifting Acoustic Spar Buoy Recorders (aka DASBRs) off of Oʻahu and Kauaʻi and then followed the planned trackline to the northwest into the Papahānaumokuākea Marine National Monument. We surveyed 1,565 nautical miles of daytime trackline and went to the extreme west end of the exclusive economic zone (EEZ) after crossing over the International Dateline (180° longitude).

We sighted 73 cetacean groups and identified 51 of those groups to 15 species. We saw beaked whales most often, with 25 encounters. Because beaked whales are very elusive, and we get only brief glimpses during most encounters, we were only able to identify 9 groups to species, which included Longman’s, Blainville’s, and Cuvier’s beaked whales. We encountered 12 other cetacean species including bottlenose dolphin, pantropical spotted dolphin, rough-toothed dolphin, spinner dolphin, striped dolphin, Risso’s dolphin, false killer whale, short-finned pilot whale, pygmy sperm whale, sperm whale, Bryde’s whale, and humpback whale. We also saw a monk seal within the Monument, swimming offshore of Pearl and Hermes Reef. As usual, we heard more cetacean groups than we saw, acoustically detecting 88 cetacean groups during Sette Leg 3.

Daytime survey effort (white lines) and cetacean sightings (see legend) within the Hawaiian EEZ (blue line) during HICEAS 2017 Leg 3 aboard the Oscar Elton Sette. The red shading is a focus area around the main Hawaiian Islands, and the area shaded in green is the Papahānaumokuākea Marine National Monument, with darker shading showing where the Monument was expanded in 2016. Credit: NOAA Fisheries

We saw a total of 40 seabird species during Leg 3 on the Sette. Five of the species were new for the HICEAS effort, including Mottled Petrel, Stejneger’s Petrel, Tristram’s Storm Petrel, Short-tailed Shearwater, and Pink-footed Shearwater. At Pearl and Hermes Reef, we encountered a flock of mostly Short-tailed Shearwaters that were rafting (resting in groups) and occasionally feeding. This was a bit of a surprise because we thought they generally made a straight shot across the middle/low latitudes when migrating from Alaska to Australia. The fact that these birds go right through Hawaiian waters and feed and rest near the remote islands along their way reinforces the importance of the Papahānaumokuākea Marine National Monument to this species. 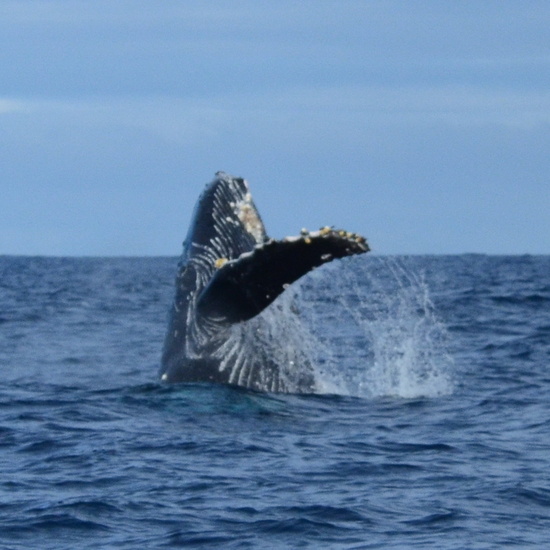 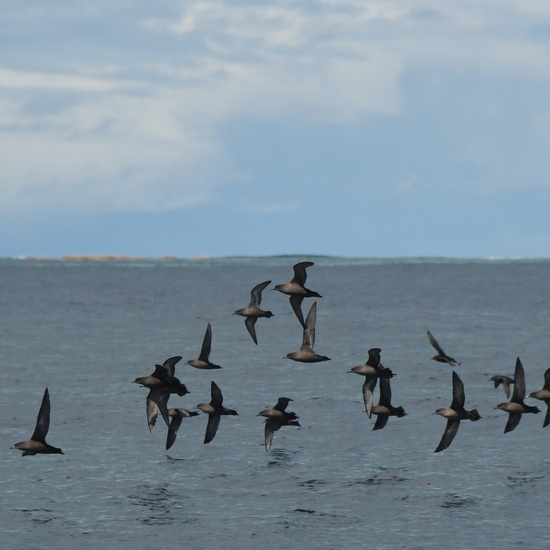 Satellite tags are incredibly useful instruments that help us study the movements of cetaceans. We can track individuals for weeks to months and can determine areas that are important to the animals. In addition to the four false killer whales that we tagged during Leg 3, we deployed satellite tags on three short-finned pilot whales during Leg 2 on the Sette. The short-finned pilot whales (triangles in the map below) were tagged off of Mauʻi and Molokaʻi and stayed north of the main Hawaiian Islands for the duration of the period their tags transmitted. Two of the whales ventured out to the edge of the EEZ (200 nmi offshore). Three of the four false killer whales (squares in the map below) were tagged off of Kauaʻi and Niʻihau on September 12th and 13th. The tracks of those tagged whales overlapped for the life of the tags, indicating that they continued to travel together. One tag (purple squares) stopped transmitting on September 16th, while the second tag (green tag) transmitted until October 4th. The third tag (yellow squares) was still transmitting on November 20th, and that false killer whale roamed far and wide.  From Kauaʻi, the whale went to the northwest into the Monument beyond French Frigate Shoals and then traveled to the northeast as far as the EEZ boundary. It moved back and forth between the main Hawaiian Islands and the Northwestern Hawaiian Islands before heading south to the southern EEZ boundary. The fourth false killer whale (red squares) was tagged off the west side of Oʻahu on October 8th. The tag was still transmitting on November 20th and during that 6-week period, the whale primarily stayed off the coast of Oʻahu.

Tracks from satellite tags deployed on short-finned pilot whales (triangles) and false killer whales (squares) during HICEAS Legs 2 and 3, respectively, on the Sette. The different colors represent different tagged individuals. The white shaded area is the Papahānaumokuākea Marine National Monument, the brown shaded area is the focus area around the main Hawaiian Islands, and the outer gray line is the 200-nmi EEZ boundary. Credit: NOAA Fisheries

We focused on the southern portion of the study area, where we spent many days of our 2,197 nautical miles of daytime search effort with rough sea conditions and/or low cetacean sighting rates. For a while, we developed a minor complex, wondering if we had accidentally signed up for the “HIEAS” survey!  Alas, time and persistence paid off, and we put the “C” back in HICEAS, ending up with 33 sightings of cetacean groups from at least 10 species and 109 acoustic detections of cetacean groups from at least 13 species.

We had a couple of “new” species for HICEAS 2017. Fraser’s dolphin, a relatively small and abundant oceanic dolphin, was seen (and heard) for the first time since the survey began. Although we didn’t see it, the acoustics team detected the first minke whale “boing” of HICEAS 2017. We collected 19 biopsy samples from four species (bottlenose and rough-toothed dolphins and false killer and sperm whales). We also picked up four DASBRs full of data and relocated one that had drifted into shallow waters and gotten stuck!

Daytime survey effort (white lines) and cetacean sightings (see legend) made within the Hawaiian EEZ (blue line) during HICEAS 2017 Leg 2 aboard the Reuban Lasker. The red shading is a focus area around the main Hawaiian Islands, and the area shaded in green is the Papahānaumokuākea Marine National Monument, with darker shading showing where the Monument was expanded in 2016. Credit: NOAA Fisheries

As for seabirds during Leg 2 of the Lasker, we recorded 3,622 individuals of at least 41 species during our strip transect effort, averaging about 125 birds per day. Seabird diversity was high, averaging about 15 species per day, reaching a high of 22 species mid-way through the trip when we were about 150 to 170 nautical miles south and south-southwest of French Frigate Shoals. The migration of some species was well underway during the last half of the trip, with several trans-hemispheric migrants adding to the high overall diversity. We saw a number of rare or unusual species for Hawaiian waters–the most unexpected was a central Siberian subspecies of the Lesser Black-backed Gull that visited the ship when we were about 170 nautical miles south-southwest of South Point, Big Island. Other noteworthy sightings include Pink-footed and Flesh-footed Shearwaters, Wilson’s Storm-Petrel, Short-billed Dowitcher, and Tahiti and Herald Petrels. We recorded 9,957 birds of at least 20 species in 56 feeding flocks, mostly over predatory fish such as tuna or mahi-mahi and often in association with flying fish. Only one flock was seen associating with cetaceans–a widely dispersed flock of Wedge-tailed Shearwaters over a group of short-finned pilot whales. 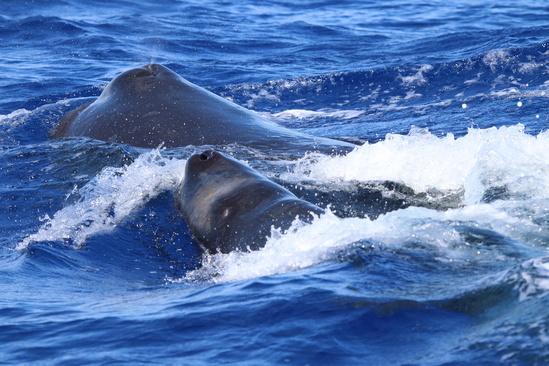 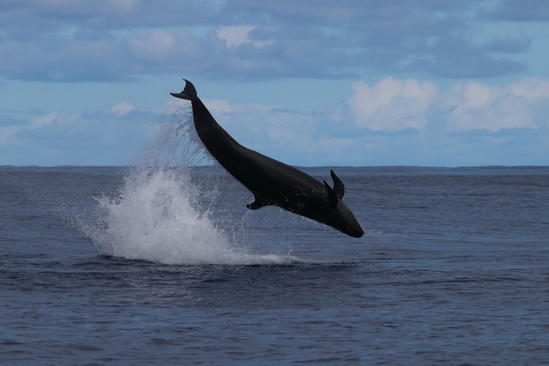 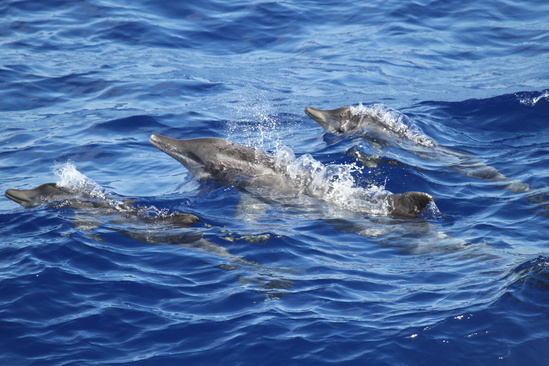 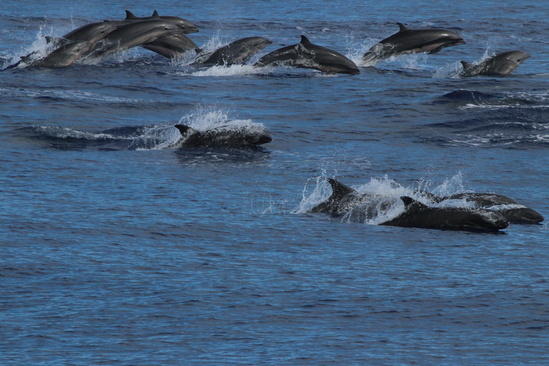 The Sette is all done sailing for HICEAS 2017–we can’t thank the officers and crew enough for helping to make HICEAS a success! The Lasker sets sail again on October 16th for its third leg. Stay tuned to the story map for more updates!

Previous: HICEAS Seabird Observers: Not Just Winging It Next: HICEAS Hilite: Dolphins from the Outer Limits