A rare species of dolphin was seen during a survey in Hawaiian waters. 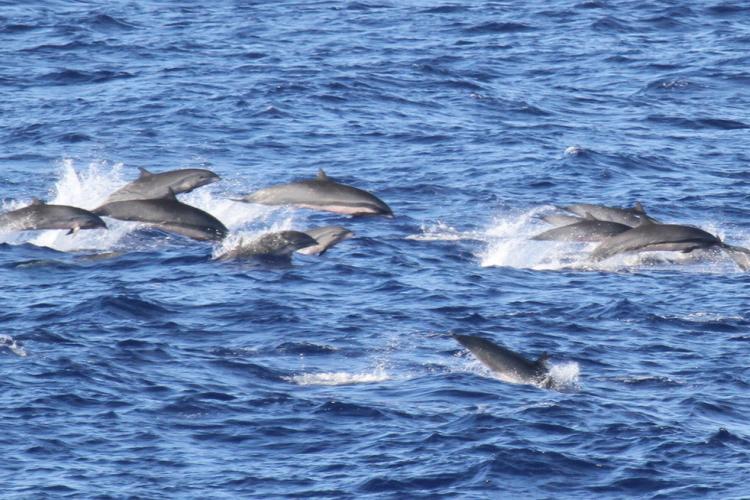 One of the joys of participating in offshore surveys like the Hawaiian Islands Cetacean and Ecosystem Assessment Survey (HICEAS) of 2017 is the opportunity to see rare species. Recently there were whoops and cheers on the flying bridge of the NOAA Ship Reuben Lasker when we encountered Fraser’s dolphins! This species of dolphin, scientific name: Lagenodelphis hosei, is infrequently seen (and thus considered ‘rare’) because of its preferred deep-ocean habitat. You have to be far offshore to be in the right place to see them. And that’s where we were when we saw them on October 21.

Fraser’s dolphins are a bit mysterious because so little is known about them. They were a relatively late entry into the taxonomy of marine mammals. What turned out to be the skull of a Fraser’s dolphin was not studied until 1956, when it was examined by Francis Fraser and declared a new species to science. The dolphin was named in his honor. Live Fraser’s dolphins were not identified until the 1970s, when they were seen during tuna purse seine fishing in the eastern tropical Pacific. Because of their offshore distribution, they are difficult to study and information is limited for answering basic questions, including how long they live, how often they give birth, how fast they grow, and what they eat.

Generally, Fraser’s dolphins have a pantropical distribution in the Pacific, Indian, and Atlantic Oceans between the latitudes of 30° North and 30° South. Occasionally, Fraser’s dolphins can be seen nearshore where deep water is adjacent to the coast; they have been seen adjacent to the Kona coast of Hawaiʻi Island and reported nearshore in the Philippines. Fraser’s dolphins were also seen during the HICEAS of 2002 (2 sightings) and 2010 (4 sightings). October 21 was the third time that Fraser’s dolphins have been seen during HICEAS 2017. The other two groups were seen on September 29. Each time the dolphins were in deep water far from shore, just as we would have expected. One of the groups in September was mixed together with false killer and melon-headed whales. 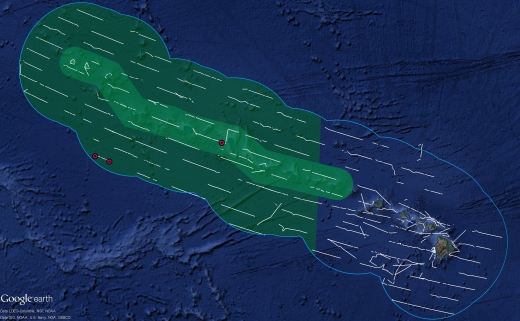 This map of the Hawaiian Islands shows all of the HICEAS survey effort (white lines) through November 9, 2017, with Fraser’s dolphin sightings shown as pink circles. The area shaded in green is the Papahānaumokuākea Marine National Monument, with the darker shading showing where the Monument was expanded in 2016. Credit: NOAA Fisheries

What one word describes Fraser’s dolphins? Fast!!! They’re usually seen in large groups – hundreds of individuals – and moving so quickly that they stir up frothy white water. Often they assemble in a chorus line formation, porpoising away amid lots of splashes.

Fraser’s dolphins are relatively easy to identify from other dolphins. They’re a stocky dolphin, with a robust body and a small beak. Their dorsal fin and flippers are noticeably smaller relative to their body size. The most distinctive characteristic is the dark gray band that extends laterally from their face to their tail stock. This band, along with a dark stripe that runs from the jaw to the flipper, creates something of a facemask – a distinctive and unique pigmentation pattern among oceanic dolphin species. In Hawaiian waters, only the adult males exhibit heavy dark bands; the patterning is much more subtle on the adult females and younger animals.

Another unique characteristic of Fraser’s dolphins may lie in their vocalizations. Fraser’s dolphin vocals have been recorded during previous surveys in the Gulf of Mexico, Caribbean, and Hawaiʻi, but it was not until 2007 that their whistles were formally described and documented. Since then, there continues to be limited acoustic data available to identify their calls because the encounter rate for these animals is so low. During HICEAS 2017, we collected acoustic recordings on the three separate sightings of Fraser’s dolphins. The first two encounters were mixed species recordings, so it wasn’t until October 21 that we collected a single-species recording. The animals were producing many whistles and only a few echolocation clicks. We hope to use these whistles and clicks to help us identify the vocalizations of Fraser’s dolphins in the acoustic data from HICEAS 2017 and other surveys.

We’ll be looking for more of these enigmatic dolphins during the final weeks of HICEAS 2017!  Keep checking the story map for updates!

Previous: HICEAS Halfway: Two Ships Keep Up the Momentum Surveying for Whales and Dolphins Around Hawaiʻi Next: Who are you? Who, Who? Who, Who? Studying a cryptic marine mammal species by eDNA 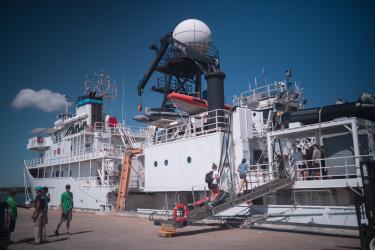