Scientists use several different pieces of equipment to do their job, especially for jobs at depth in the oceans. Often sonar imaging devices are used to examine organisms at various depths in the water column. On the NOAA ship Bell M. Shimada researchers, such as Katie Lankowicz from University of Maryland Center for Environmental Science, are using the ARIS 1800 (Adaptive Resolution Imaging Sonar) to capture digital images of organisms in high-resolution in the water column. The camera takes images parallel to the surface of the water and can operate all on its own due to the watertight bottles that house the batteries and computers. ARIS can be deployed into the open ocean up to 300 meters deep and can ¿see¿ up to 15 meters away from the camera lens. 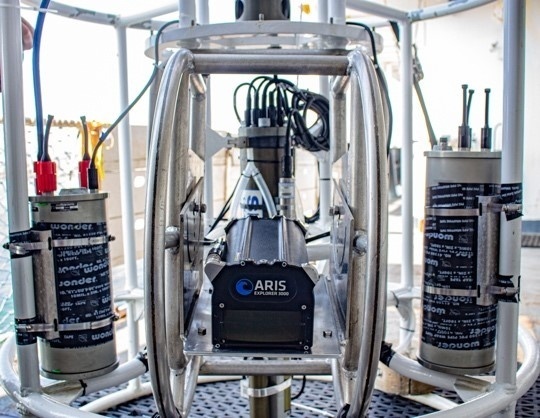 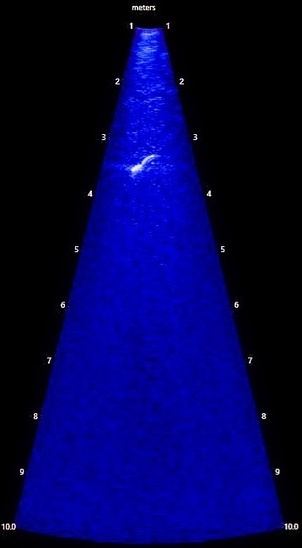 Image from ARIS Sonar, white streak at the top is a fish that was photographed by ARIS as it swam by. Photo: Sarah Vojnovich

After deployment, when ARIS is back on the ship, the data can be downloaded to a computer for further analysis. The ARIS is particularly useful at observing predators such as salmon and Pacific hake, and when paired with the PlanktonScope, which is used to view prey (see previous Newportal Blog https://www.nwfsc.noaa.gov/news/blogs/display_blogentry.cfm?blogid=1), can provide insights into the distributions and interactions between predators and prey.

The ARIS sonar is strapped to a cage that also houses a CTD. The CTD sensors collect scientific data, such as depth-specific salinity, temperature, as well as chlorophyll, a measure of primary productivity. Scientists use these data to associate oceanographic parameters and productivity, to prey and predator interactions. Such an integrated and fine-scale approach allows scientists to explain ecosystem processes such as those that occur at oceanographic fronts. 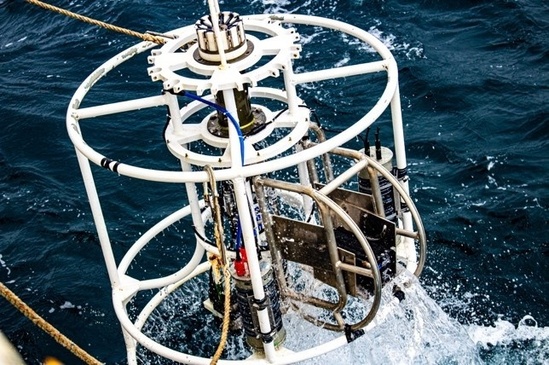 ARIS Imaging Sonar and CTD being retrieved out of the water onto the NOAA ship Bell M. Shimada. Photo: Sarah Vojnovich 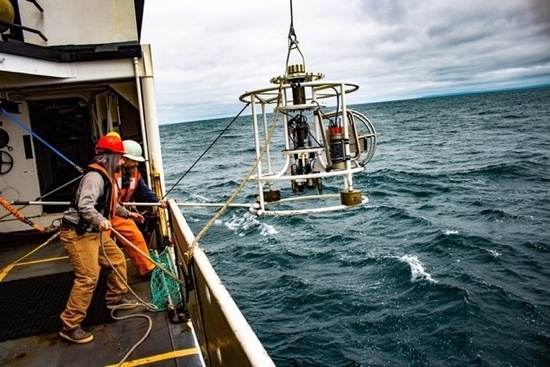 Chemical and physical ocean conditions also help scientists understand and potentially predict our ocean's natural processes. For instance, conductivity, which tells us how well an electrical current carries through a body of water, is directly related to salinity since saltier water carries a higher current. Salinity, plus temperature and pressure measurements, can tell us, using an equation, how dense the ocean water is, which can help us understand the distribution of water masses and major ocean currents. Therefore, equipment such as CTDs can help scientists relate oceanographic parameters to the biota of a particular environment.

Previous: Trawling off the California and Oregon Coast Next: Neuston and Bongo Plankton Nets