One way scientists assess the health of our ocean's ecosystems is to take samples of zooplankton and ichthyoplankton (fish eggs and larvae), both on the surface of the water and at depth. Observations of these plankton can inform us greatly about productivity at the bottom of the food chain, spawning location and stock size of adults, dispersal of larval fish and crabs to and away from nursery areas, and transport of ocean currents. 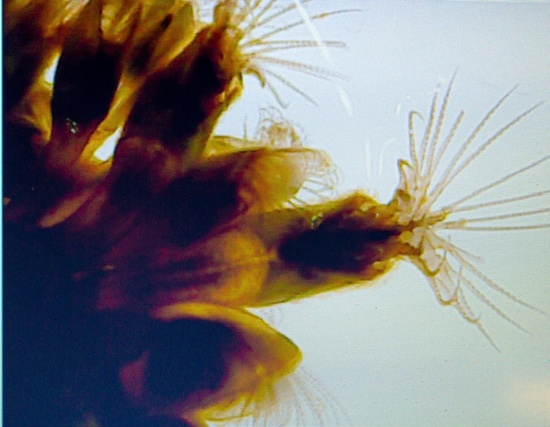 Two tools come in handy when you are plankton sampling; the Neuston net and the Bongo net. The Neuston net, also commonly known as the manta net due to its shape like a manta ray, samples the very surface layer of the ocean, also known as the neuston layer. After a neuston tow, the tiny organisms caught at the cod end of the net are put into a sieve where organisms such as crab megalopae (crab larvae), larval fish, and Velella (colonial jellyfish found only in the neuston) are frozen for later analysis in the lab. 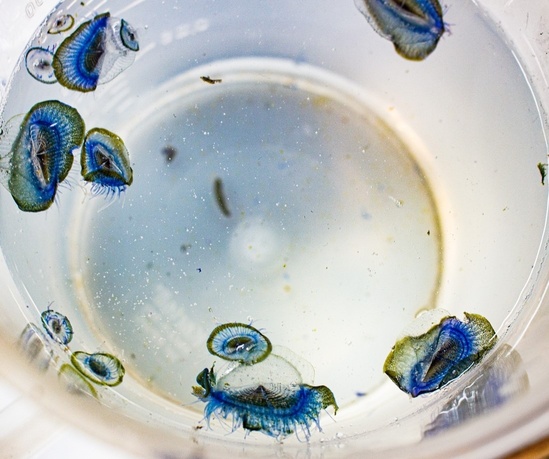 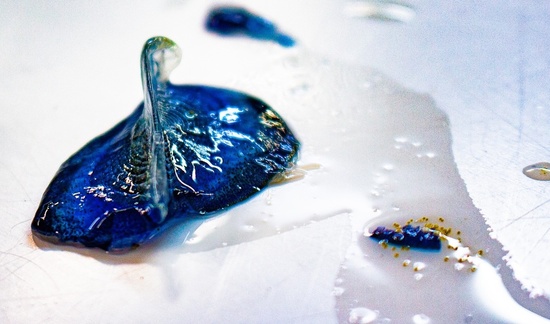 Velella are a unique organism in that they are transported by the wind via their sails located on top of the bodies. They are also a good indicator of the strength, direction, and presence of eastward onshore winds and have been subject to massive strandings on beaches. As an interesting side point, they also have the ability to make their own food due to symbiotic algae living within them. 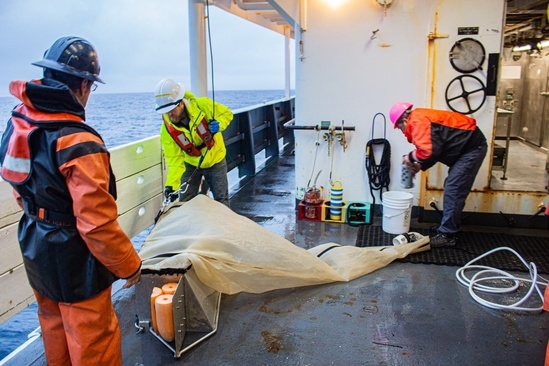 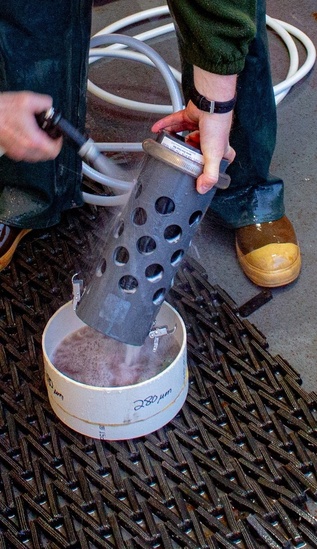 Cod end of the Neuston tow plankton net, putting plankton caught off the Oregon coast into a sieve to be rinsed and then taken back to the lab. Photo: Sarah Vojnovich

Sampling crab megalopae (approximately 1-5 mm) at the surface can inform us about their distribution around oceanographic fronts, transport, and in relationship to local characteristics. It is not uncommon to find crab megalopae, such as those from Dungeness crabs, in the Neuston tows. Crab megalopae is the final pelagic stage in the crab's life cycle before they settle to the bottom as juveniles, and, like other zooplankton, they migrate from daytime depths to the surface to feed at night, although some remain at the surface even during the day. This is unusual since remaining at the surface during the daytime could mean a higher chance of being eaten. 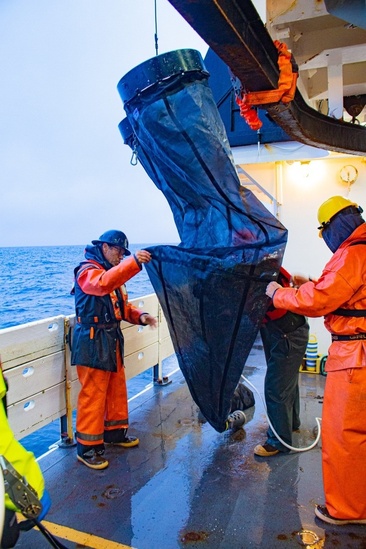 Another commonly used tool to assess the health of our ecosystems by zooplankton and ichthyoplankton sampling is the Bongo net. Bongo nets can be deployed into deeper depths to sample the organisms during the day that live in the darker, deeper water column that would normally migrate to the surface at night to feed. Often in the sampling you will find krill, fish larvae, crab larvae, and a variety of other zooplankton. These organisms are critical as the foundation of a robust food chain. Elucidating their distribution and abundance is valuable baseline information to monitor the condition of the ecosystem and potential productivity of higher trophic level taxa, many of which we rely on for fisheries (e.g., salmon). 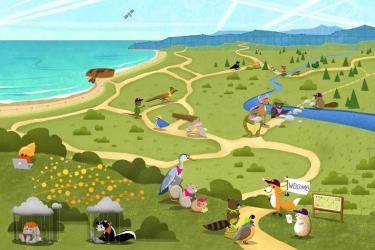