Four Saildrones (Saildrone, Inc.) are collecting data along the Bell M. Shimada¿s transects this year. When the first two (1039 and 1040) started their transit toward Point Conception on June 12, they encountered winds as high as 15-20 kt, and made good time. Once they began running transects, however, the winds died down and calm conditions made navigation slow. These low winds dogged 1039 and 1040 until yesterday, when the call was made to have the vehicles skip ahead so they did not fall too far behind Shimada. The other two vehicles (1043 and 1044) began collecting data on-transect on June 19. They have also encountered lower wind conditions at times, but sufficient to make good progress. A quick analysis (by Chu) suggests the vehicles need at least 10 kt of wind for good navigation. That makes for an interesting situation in a survey year-- the Shimada has enjoyed the glassy-calm conditions, but the Saildrones require wind! 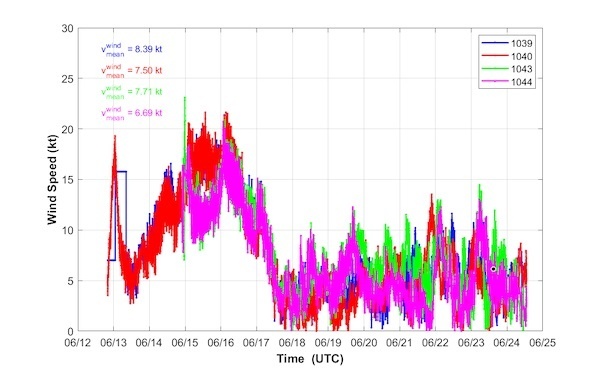 Plot of wind speed (vertical y-axis, in knots) versus date (horizontal x-axis) for the four Saildrone vehicles (1039 in blue, 1040 in red, 1043 in green, and 1044 in pink) that are collecting data along NWFSC survey transects. Mean wind speed calculated over the June 13-25 timeframe.

Previous: Calibration Day Next: Seeing/Hearing Dolphins with Our Echosounders