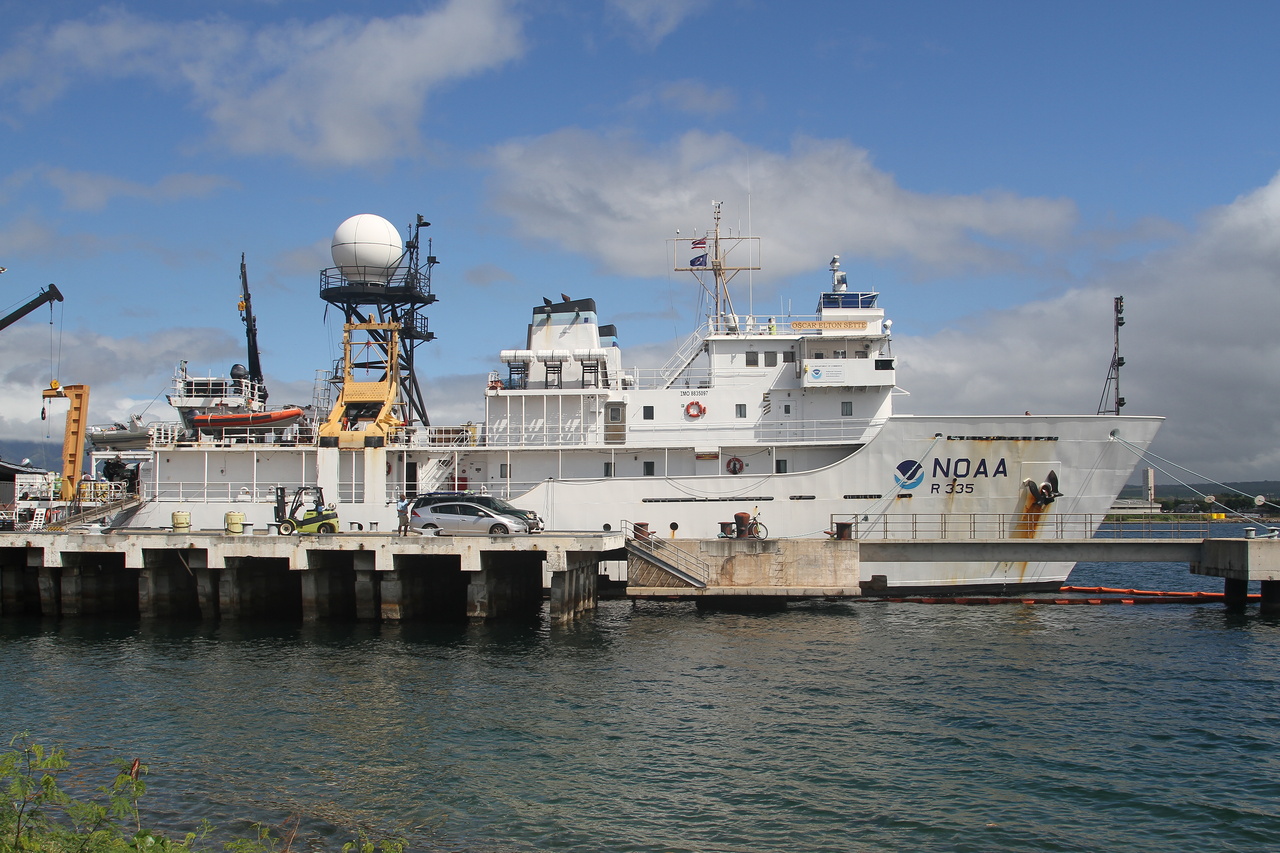 The Pacific Island Fisheries Science Center has been surveying coral reef ecosystems in the Pacific since the early 2000s. We collect data to assess how coral reefs vary over space and time. We do this to inform the management of these stunning and important ecosystems, which are packed full of biodiversity and provide coastal protection, food, and livelihoods to millions of people worldwide. During this expedition, we will survey the Islands in the Hawaiian Archipelago—the main Hawaiian Islands and the Northwestern Hawaiian Islands and atolls. Follow our progress as we post photos of what we see at sea! 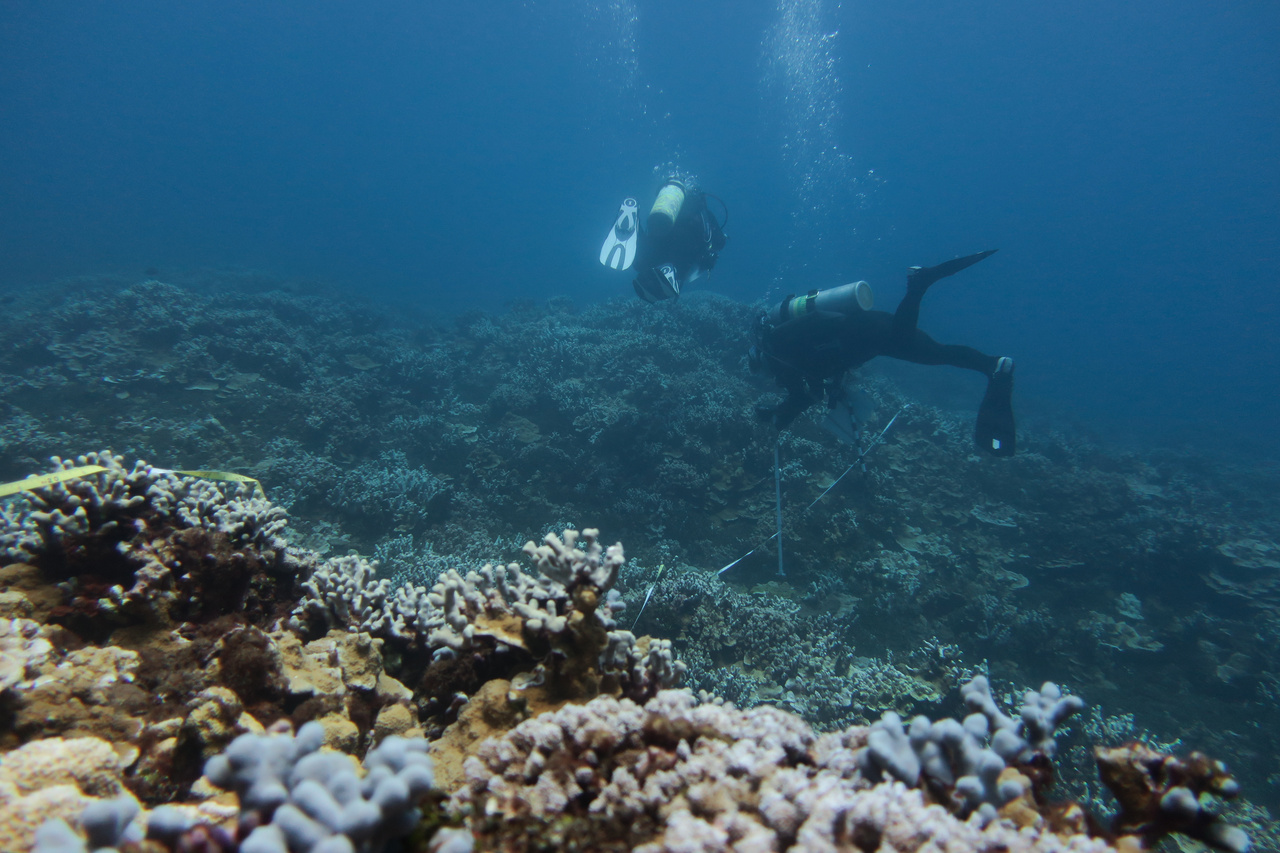 The coral team photographs the coral colonies along a transect off of Lānaʻi. Before taking pictues, they measure, identify, and note the health of colonies. This is the first island stop on our way to the island of Hawai'i. Photo: NOAA Fisheries/Courtney Couch. 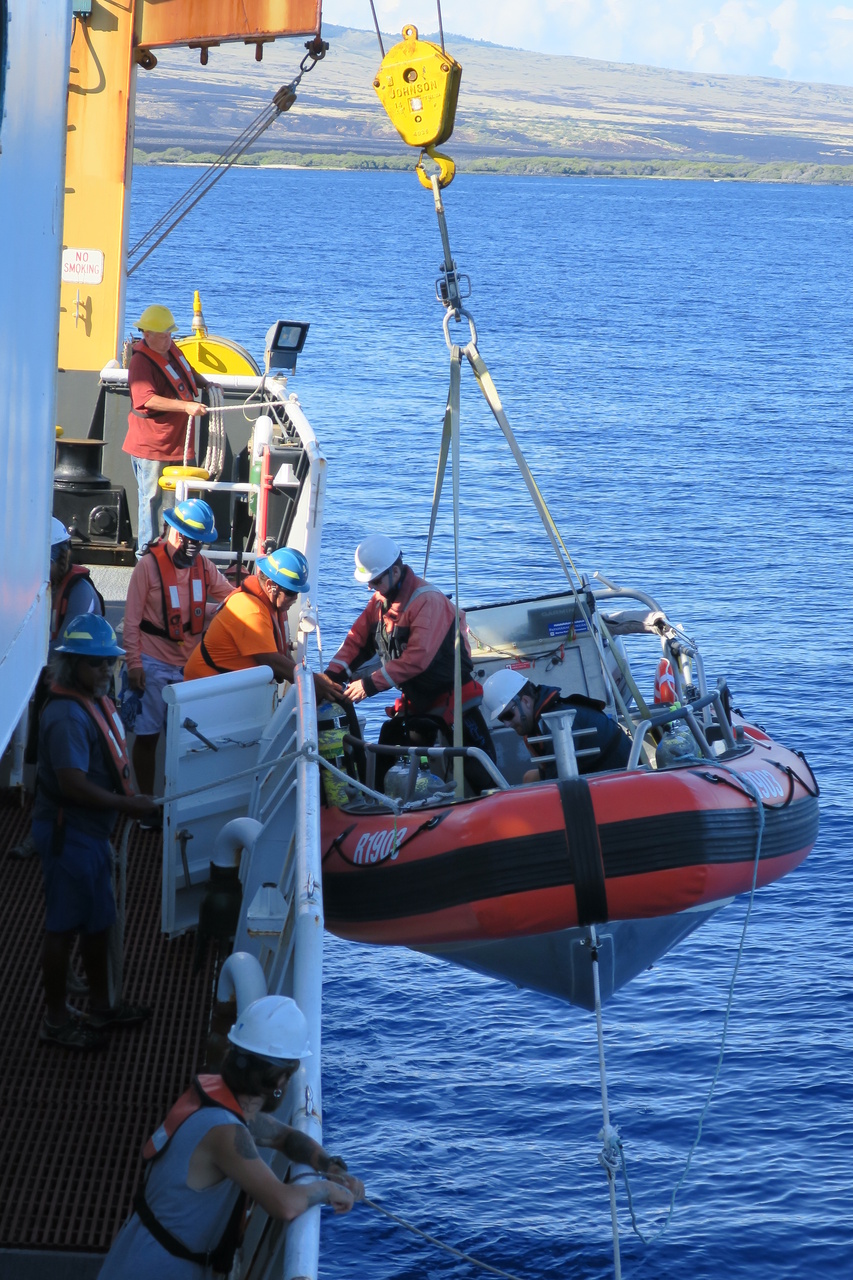 It takes coordination from a lot of people to get our survey work done. Here, the deck crew tends lines as the crew, scientists, and dive chamber operators load one of the small boats. Everyone pitches in to make sure our mission is a success! After loading and lowering the boat to the water, the fish team will be off counting reef fish in waters off the Kona coast of Hawai'i Island. Photo: NOAA Fisheries/Kaylyn McCoy. 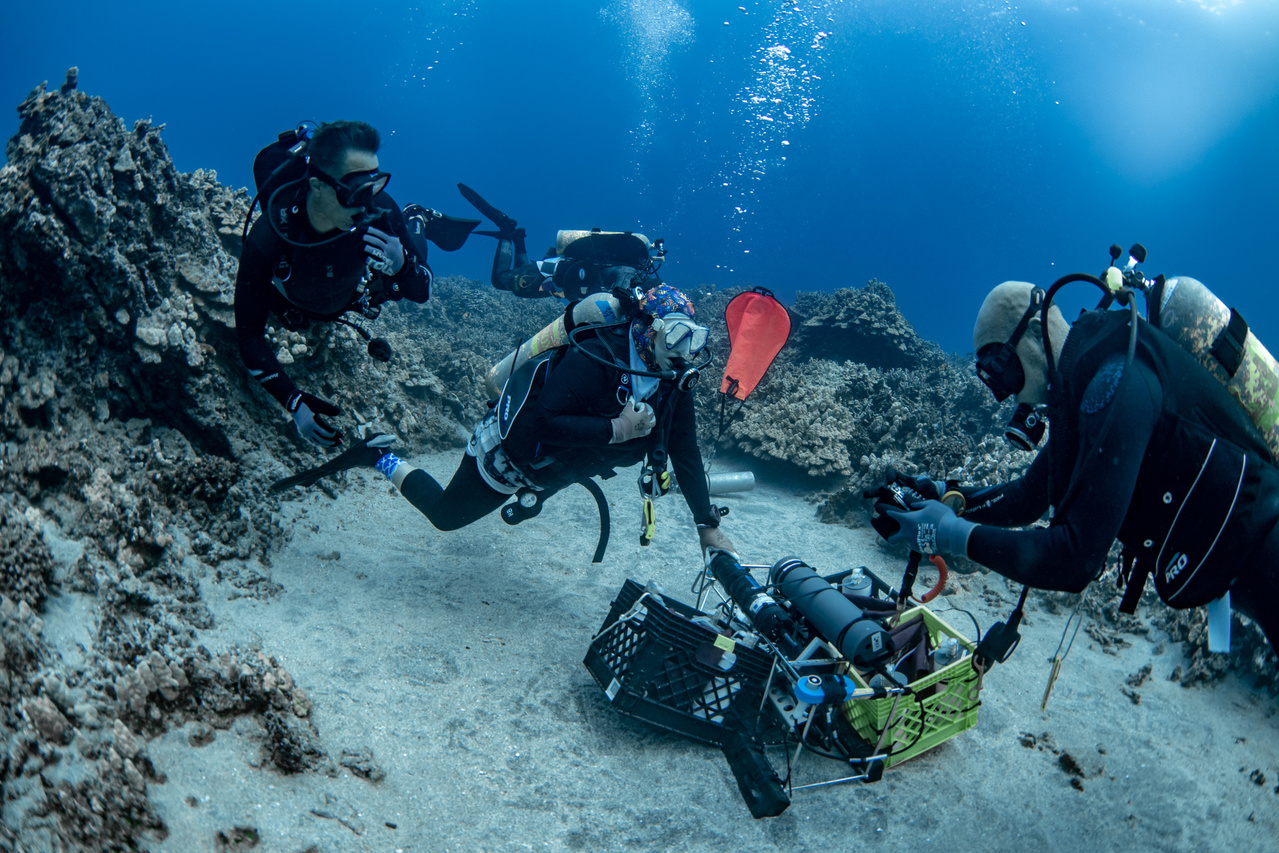 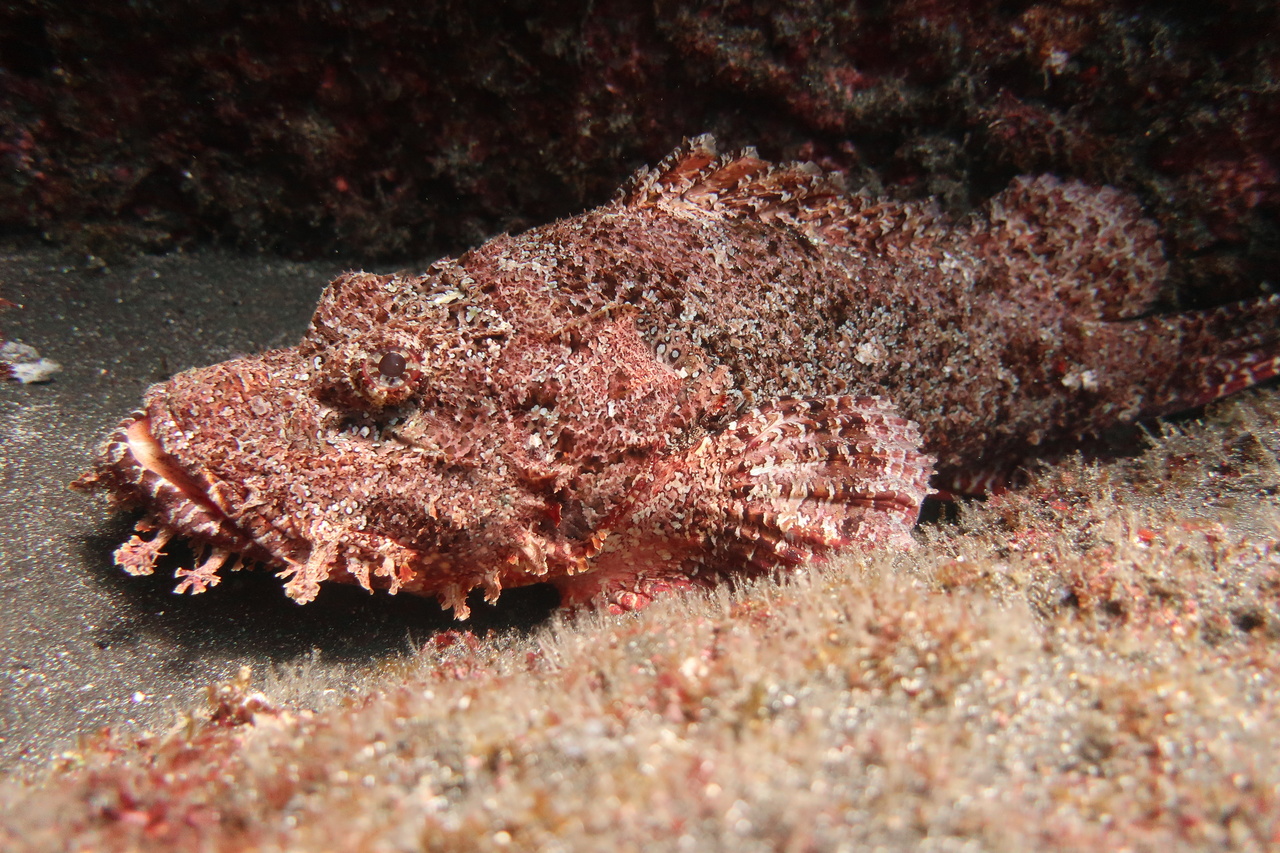 Our fish team spotted this titan scorpionfish — a master of disguise. This predator lies in wait of unsuspecting prey, and is an important component of the coral reef ecosystem. Its coloration and appendages blend in with the algae around it, and as soon as an unsuspecting fish gets too close, it sucks the prey into its large mouth! Photo: NOAA Fisheries/Taylor Williams. 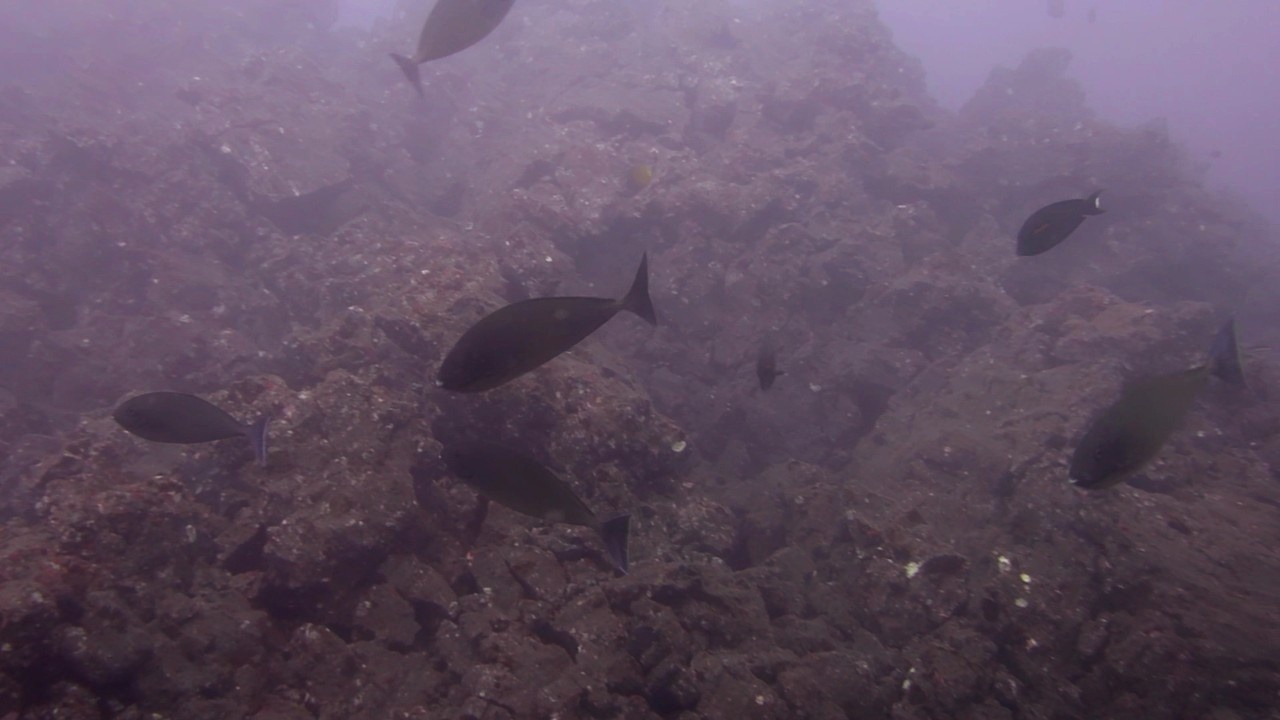 Last June, Kīlauea volcano’s eruption near Puna, Hawaiʻi, created a lava flow out into the ocean, which then cooled and formed new land and new reef. Our fish team had the rare chance to survey this area today. The substrate is composed of a steep slope of loose, cooled lava rocks and sediment, and although coral has yet to colonize the area, many fish, such as these sleek unicornfish and orangeband surgeonfish, were seen schooling around the new habitat, along with a number of young urchins. Photo: NOAA Fisheries/Andrew Gray. 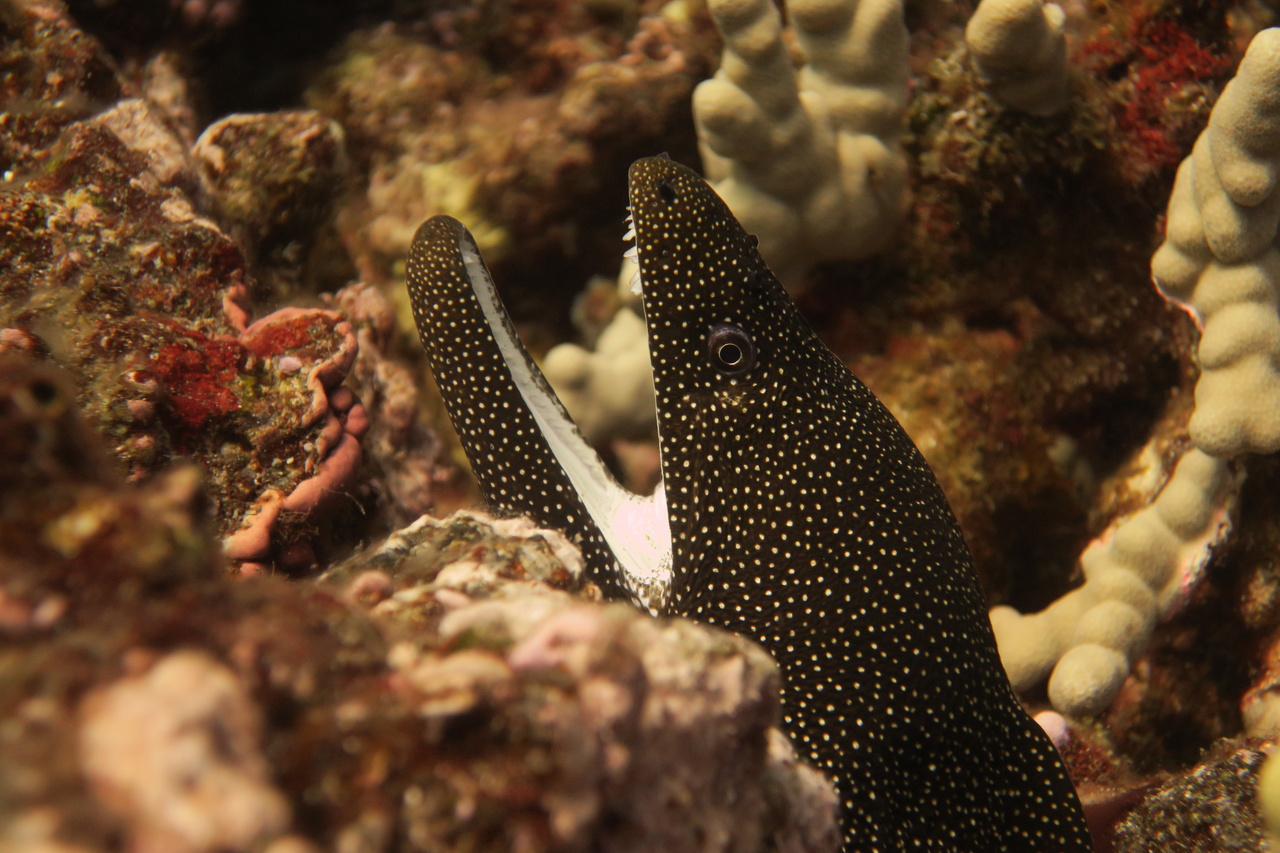 Moray eels, such as the whitemouth moray, are common predators around the Hawaiian Islands. Some speculate that eels are common due to a lack of competition – the data that we are collecting can help answer this question. This one looks menacing, but opening its mouth is how it breathes, pumping oxygen over its gills. Another interesting fact: moray eels have two sets of jaws: one to capture their pray, and another set of inner jaws that are thrust forward from its throat to swallow fish whole! Photo: NOAA Fisheries/Kaylyn McCoy. 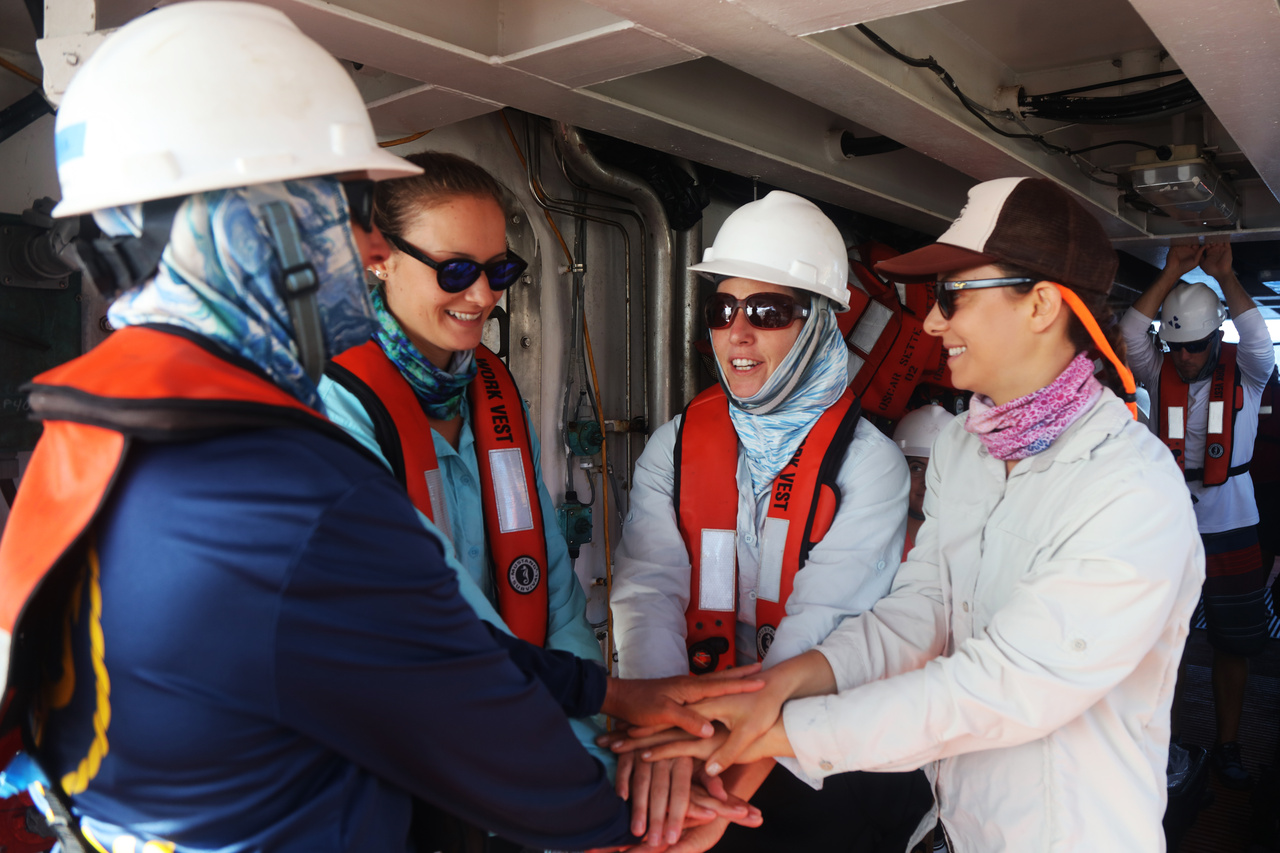 Let leg 3 of our expedition begin! Over the next 14 days, we will dive around the islands of Kauaʻi and Niʻihau. Today, we conducted reef fish, coral, and oceanography, and climate change surveys around the south shore of Kauaʻi. Go Team! Photo: NOAA Fisheries/Raymond Boland.

Oasis on the Barren Bottom 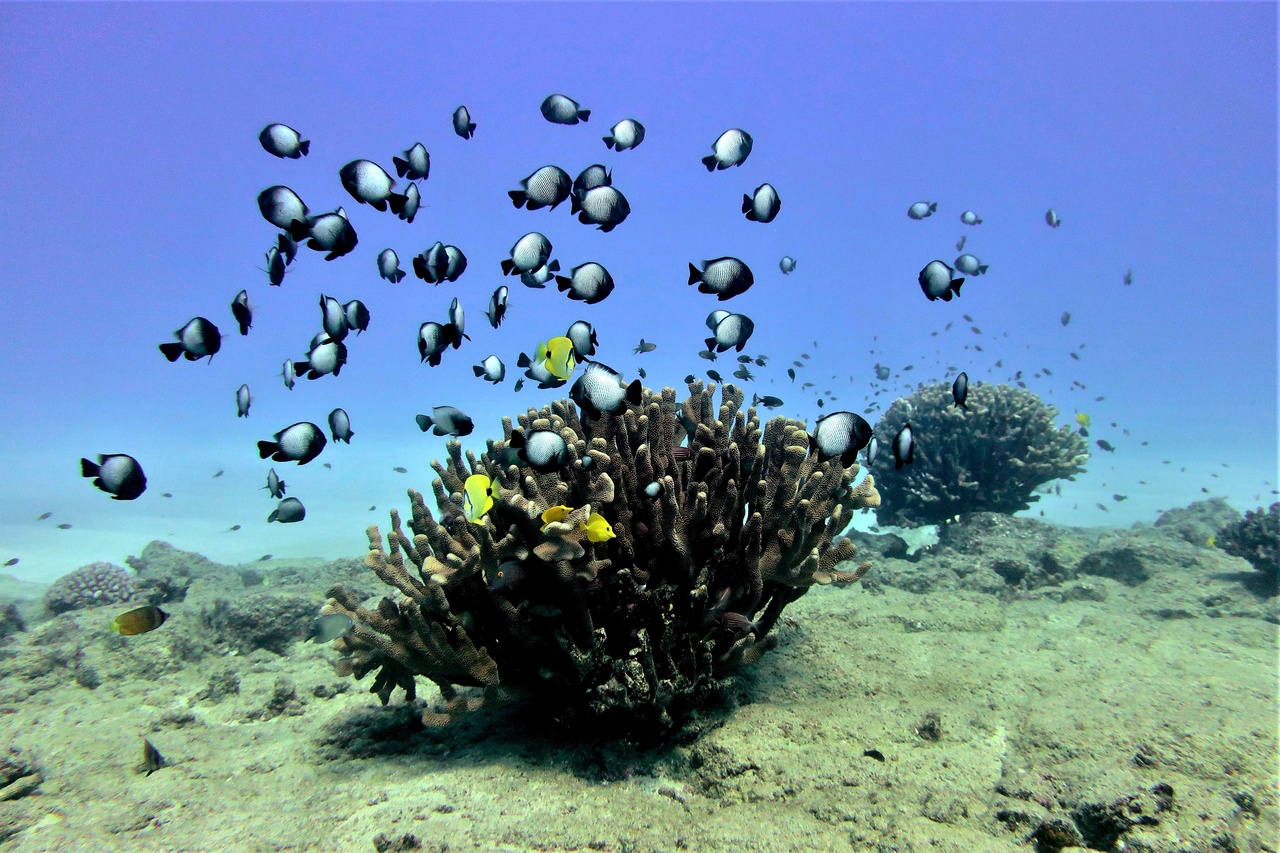 As the divers survey the reefs around Ni'ihau, they encounter more rocks, boulders, and pavement than dense coral reef. Here, a few solitary Pocillopora grandis coral colonies serve as a welcome shelter for these butterflyfish and damselfish. Photo: NOAA Fisheries/Ari Halperin. 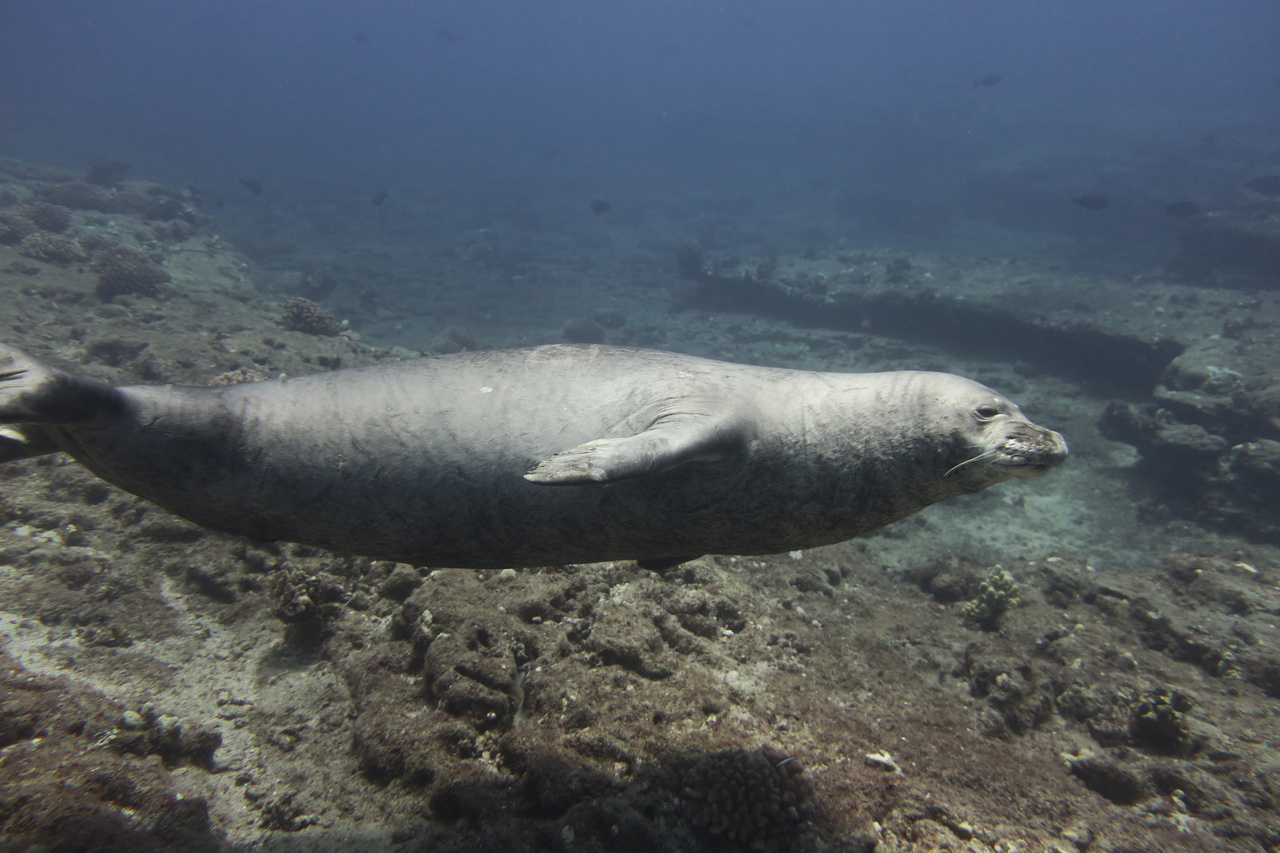 This large, male Hawaiian monk seal came up close to greet our divers as they started their coral surveys on the underwater slopes of Lehua Crater. Over the course of our 2 days at Ni'ihau, we spotted more than 15 monk seals along the beaches and waters of this "Forbidden Isle." Photo: NOAA Fisheries/Mollie Asbury. 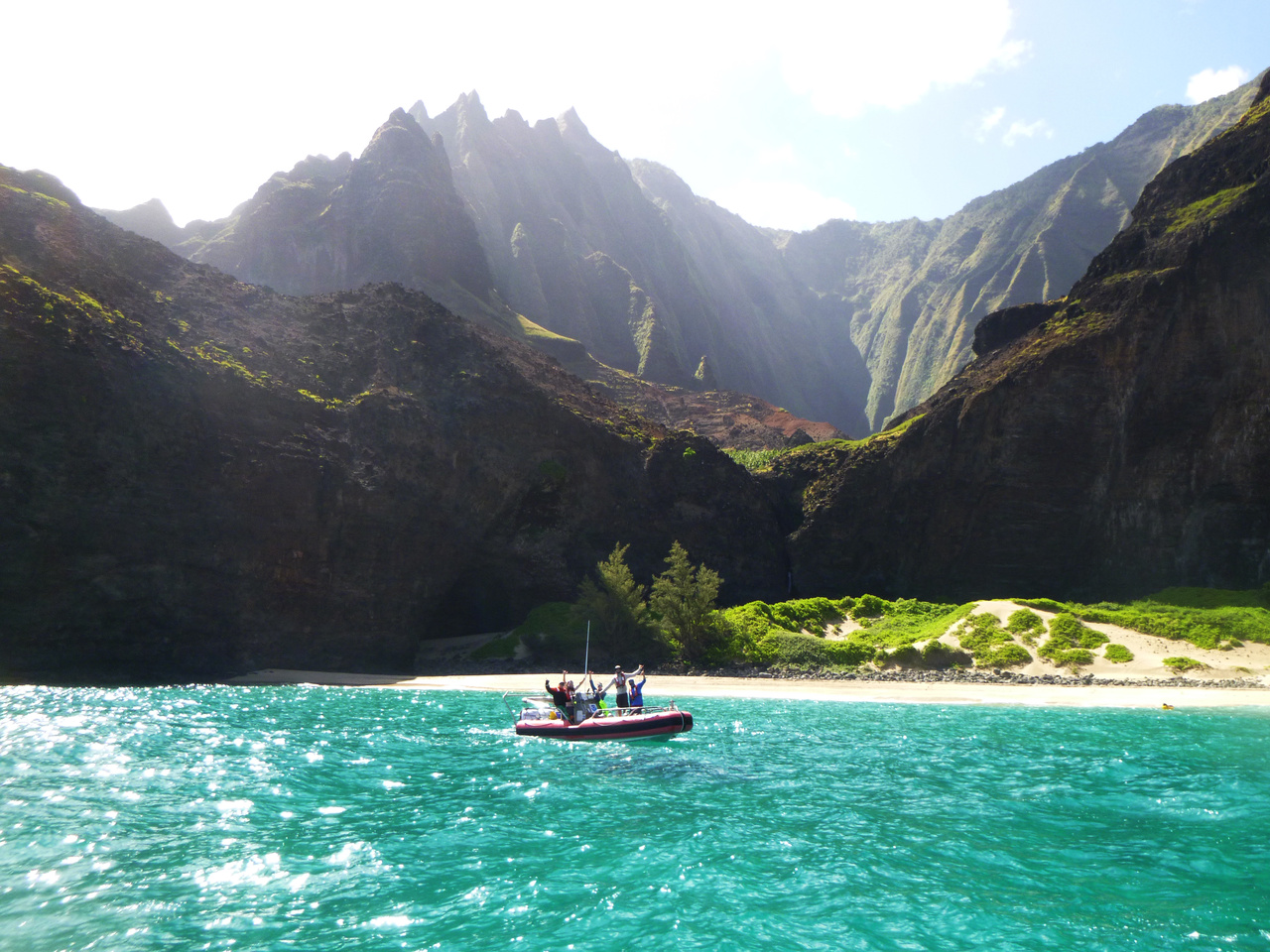 Today was a very special day on the water — we surveyed the reefs around the Nā Pali Coast. We find mostly rocks and boulders below the water's surface. Fishes enjoy the shelter of the boulders, while small coral colonies grow and claim their space on top of the boulders. The Nā Pali Coast can endure some harsh winters with major swells, but it is much calmer in the summer. Photo: NOAA Fisheries/Mia Lamarind. 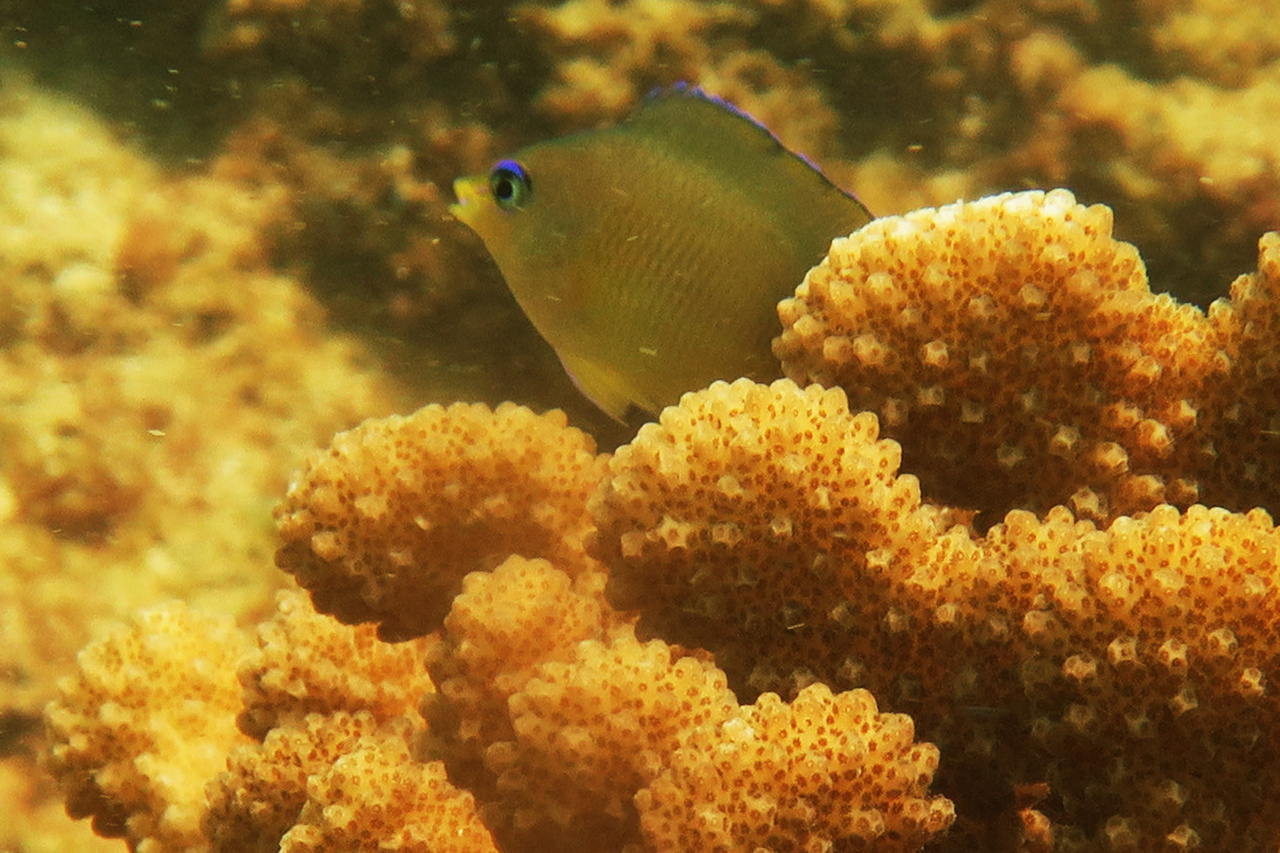 These damselfish are often found guarding cauliflower-like coral heads. They dart in and out and chase away other fishes that come close — it's fun to watch. We can distinguish these fish by their bright blue eyes. Photo: NOAA Fisheries/Raymond Boland. 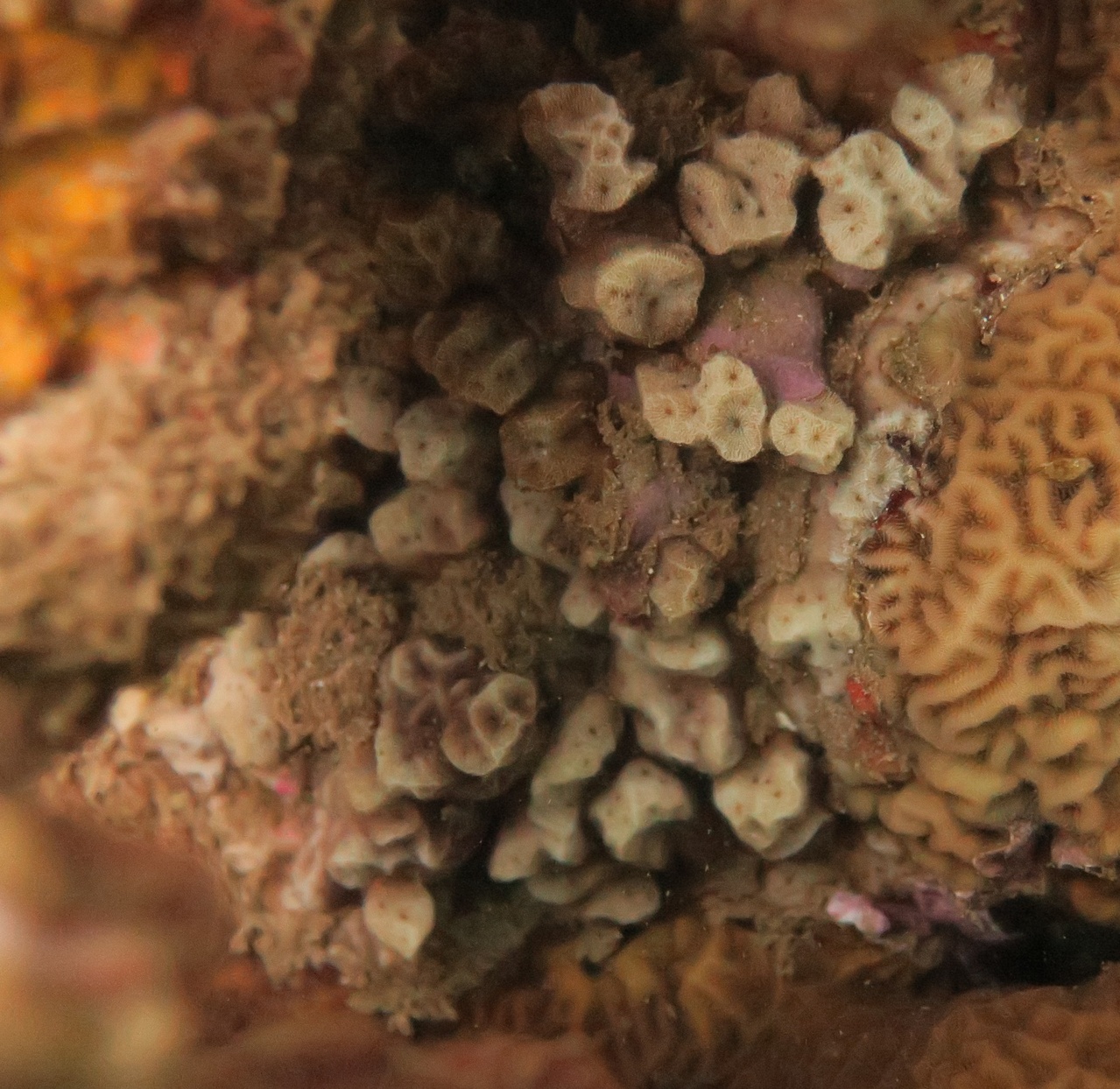 Benthic divers found two colonies of Psammocora obtusangula—each only about 5–8 cm wide, and each at different dive sites in Lana'i. This rare coral species sent our scientist to the ID guides to figure out what they had seen. Our divers remain alert for new and rare species while they conduct their monitoring surveys for fishes and corals. Photo: NOAA Fisheries/Brittany Huntington. 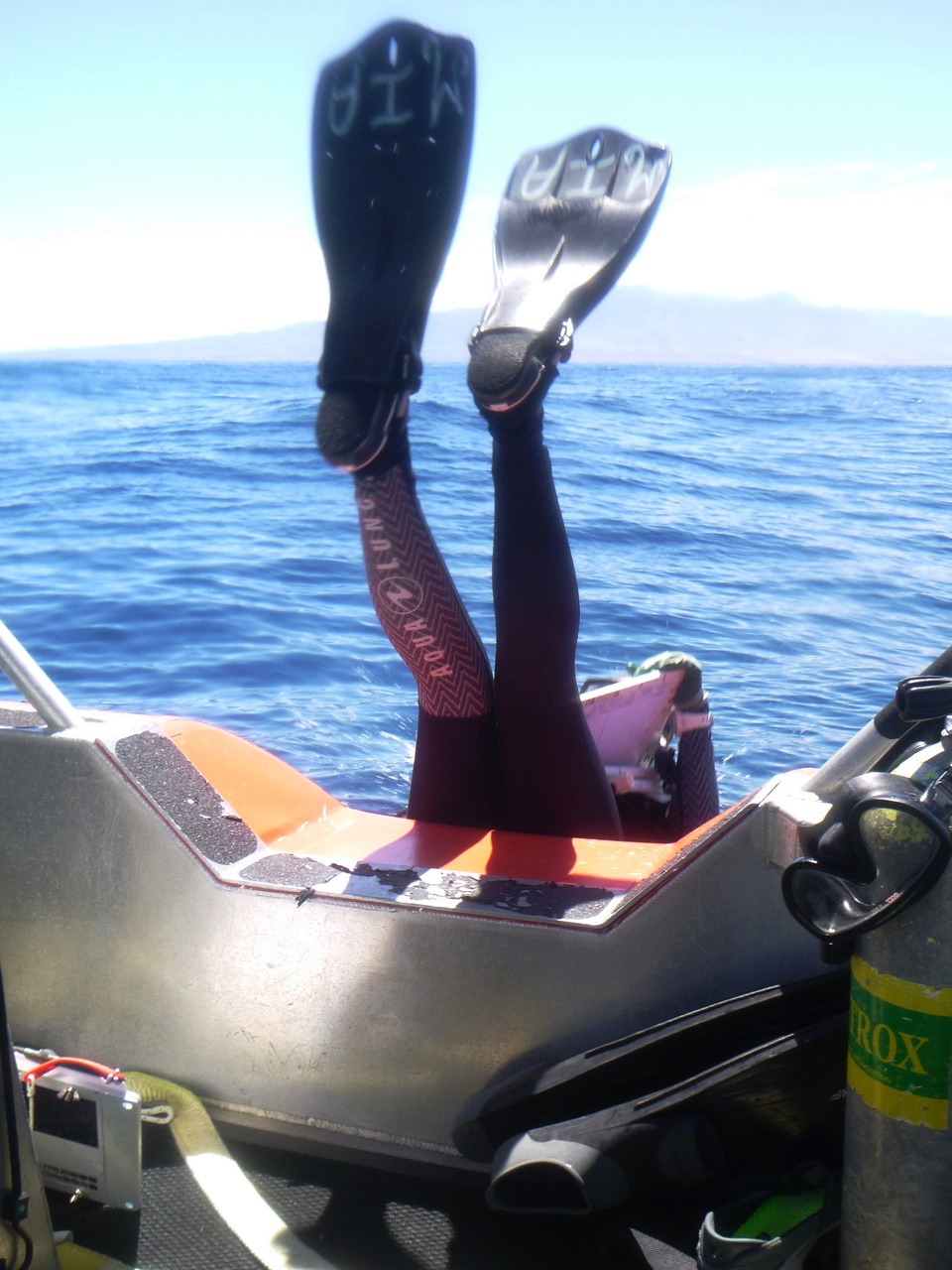 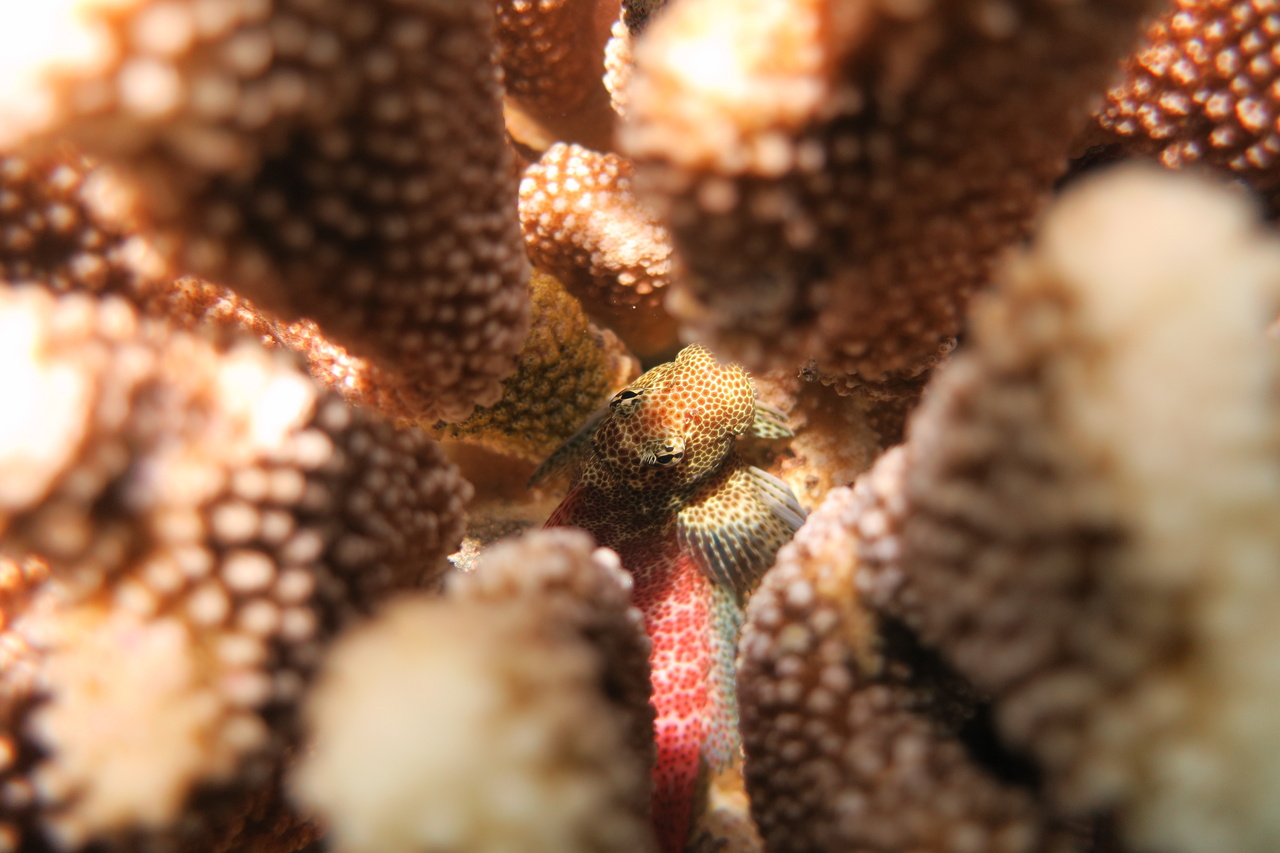 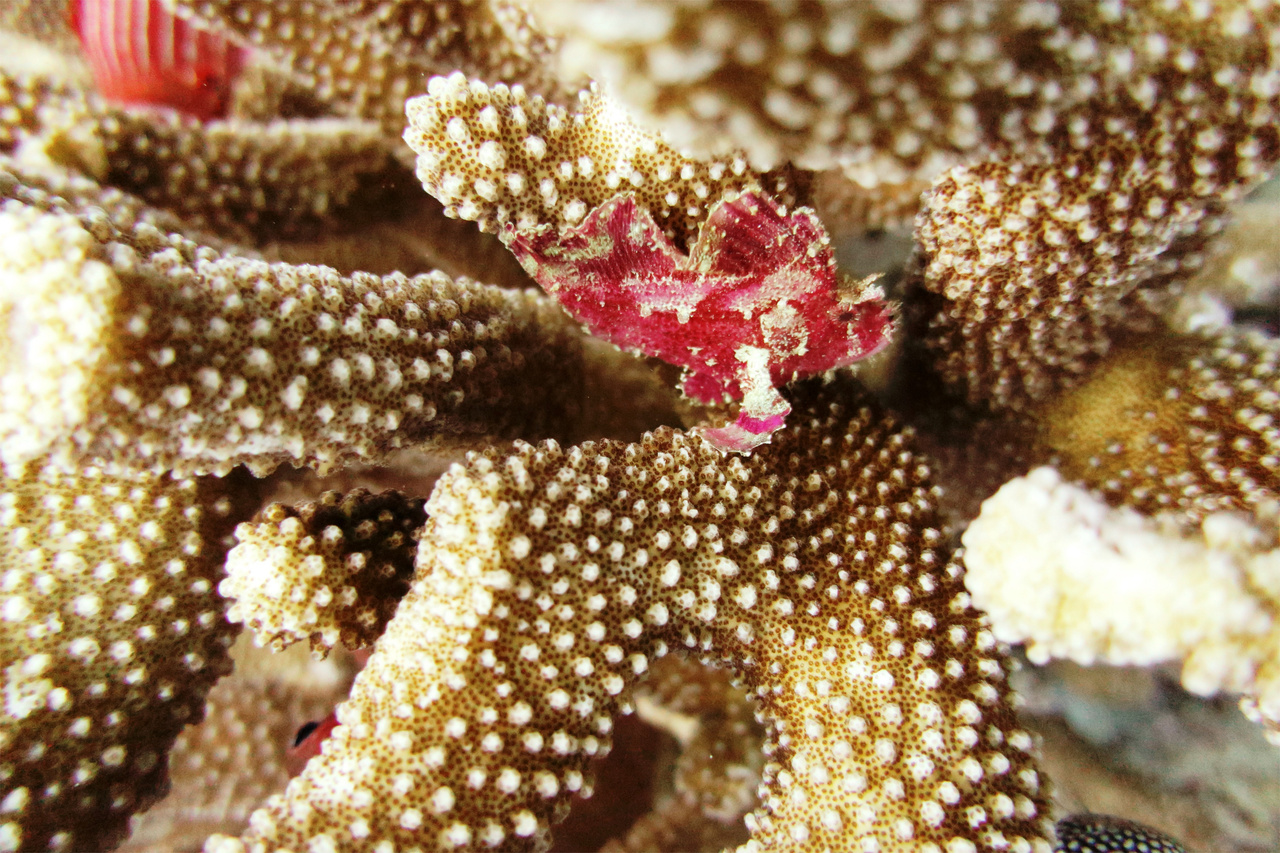 This tiny pink fish (about 2 inches long) is nestled among the branches of a coral colony. Like other scorpionfishes, this species harbors algae and other growth on its skin. When its time for a fresh new look, the fish molts in a matter of minutes and emerges with a clean slate. Photo: NOAA Fisheries/Brittany Huntington. 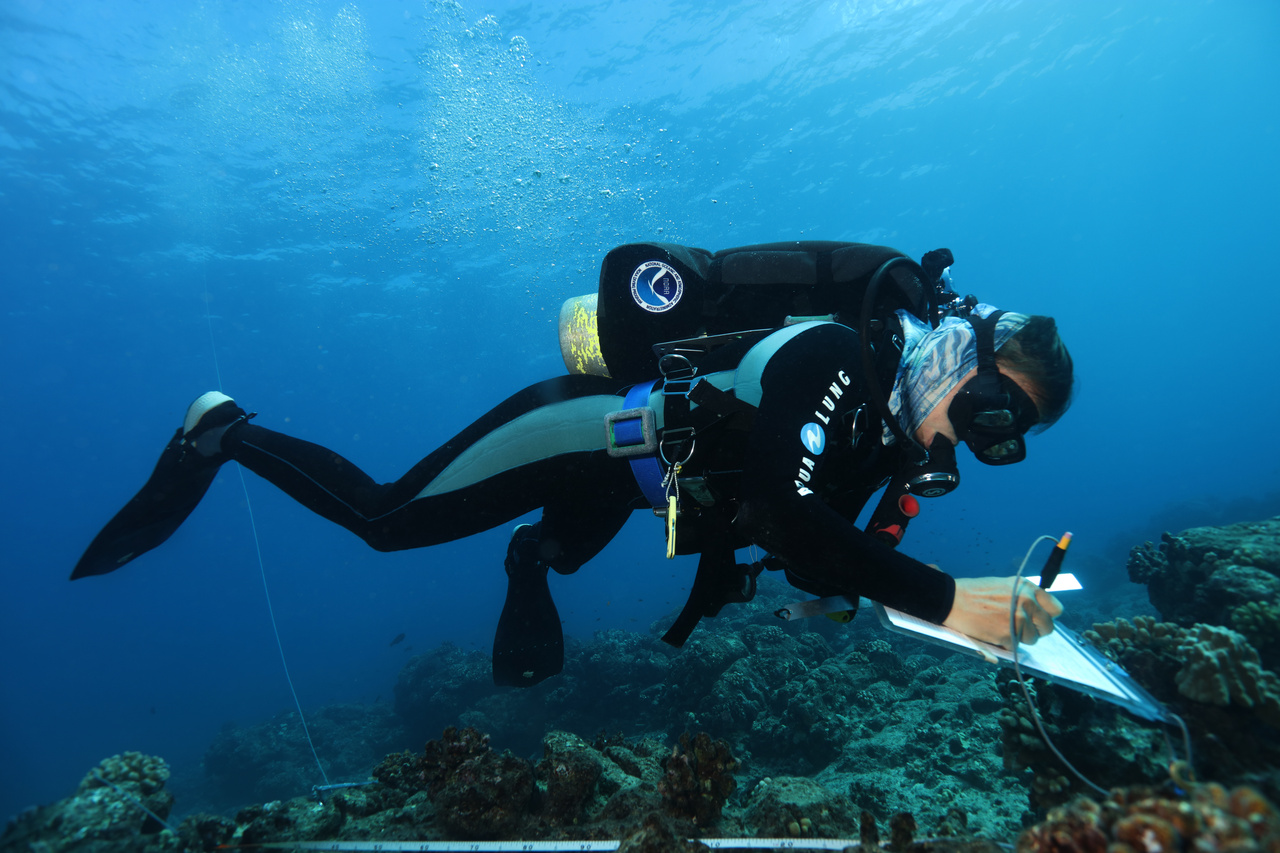 Benthic divers use underwater paper to record data on the size, species and health of coral colonies. PIFSC diver, Rhonda Suka, demonstrates perfect bouyancy while get all the details down on her dive slate. Photo: NOAA Fisheries/Raymond Boland. 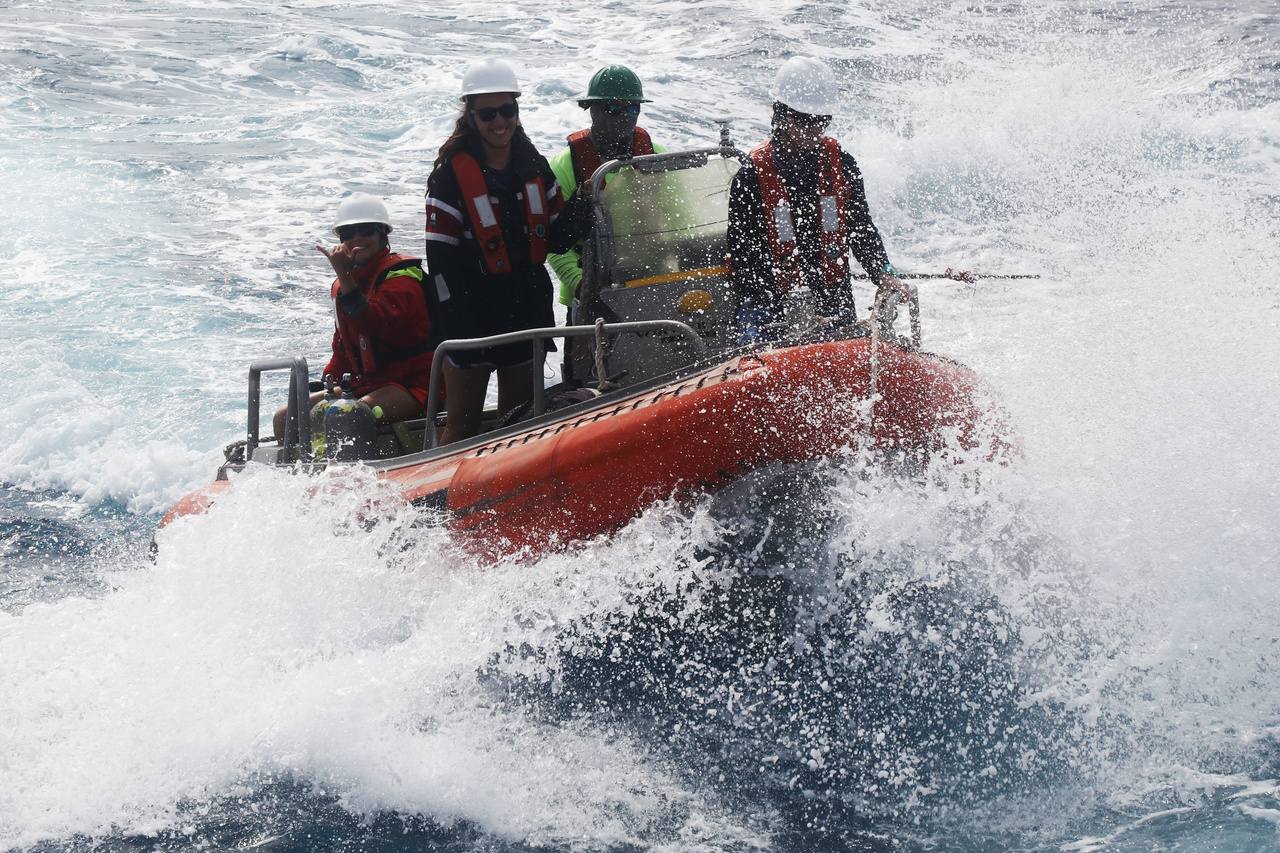 Sunday brought rough seas to the windward side of O'ahu, but our scientists carried on with executing diving surveys. Safety gear in place and smiles all around---this team of divers returns to the R/V Sette after a successful day of fighting swells and surge. Photo: NOAA Fisheries/Raymond Boland. 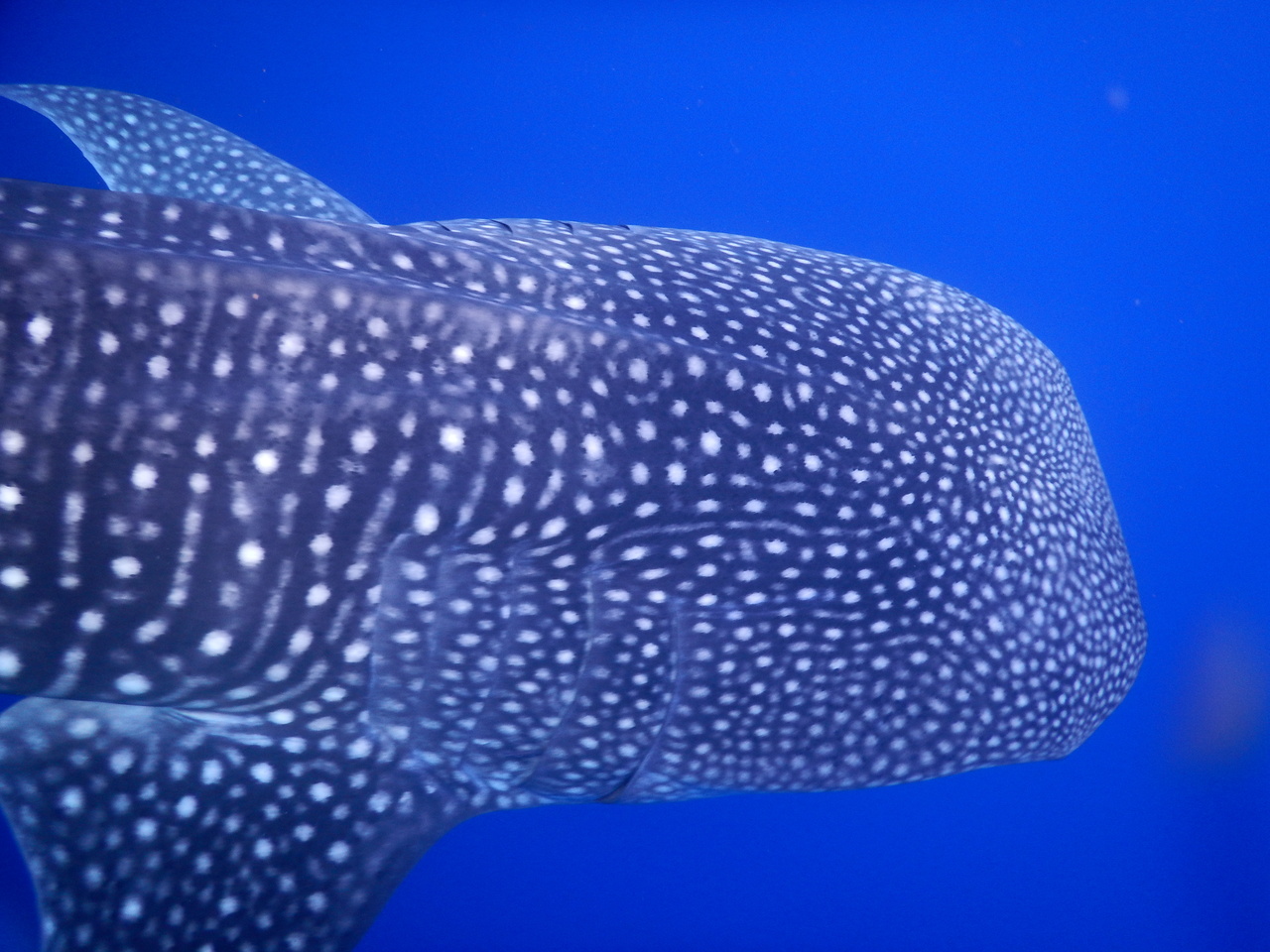 We have exciting news from the Hawai'i Uncharted Research Collective: the whale shark we spotted off Au Au Point on the Big Island of Hawai'i was a new individual for their catalogue! This means that our coxswain, Mills Dunlap, who spotted the whale shark, get the honor of naming this individual. Introducing Hawkins the Polliwog whale shark, named in honor of Mills' son born earlier this year. Congrats Mills and baby Hawkins! We are nearing the end of Leg 3. We are steaming to Maui to take advantage of calm seas predicted for Tuesday before heading home to Pearl Harbor. Photo: NOAA Fisheries/Mills Dunlap. 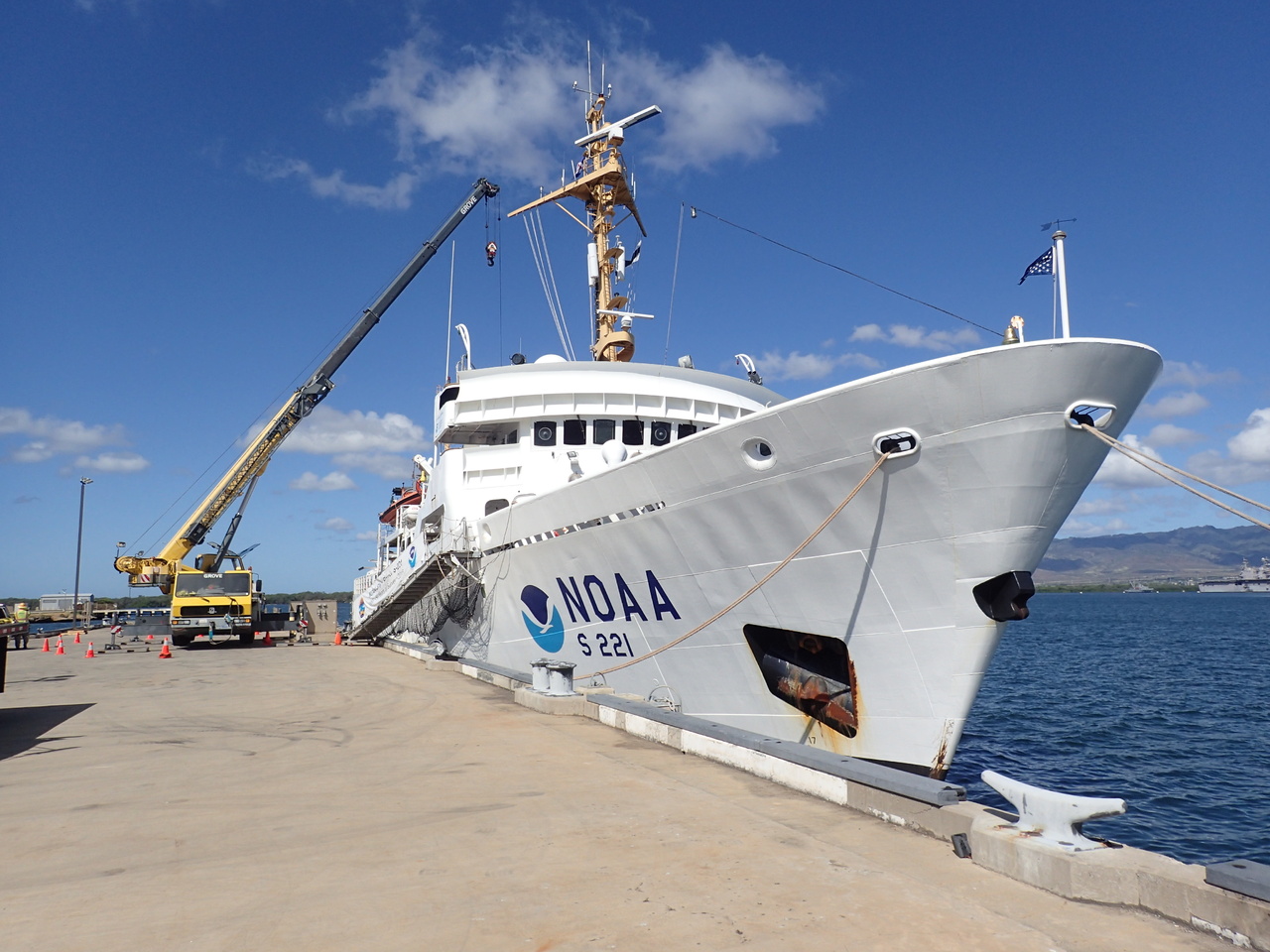 Leg three of our mission has ended and we are preparing for the fourth leg, which will take us up to the Papahānaumokuākea Marine National Monument. We are saying goodbye and thank you to the Sette, and moving onto the NOAA Ship Rainier. The Rainier came all the way from Alaska to help us out! The Rainier is a hydrographic survey vessel that maps the ocean floor, but they are taking a break from their mapping to assist in our survey mission. Photo: NOAA Fisheries/James Morioka. 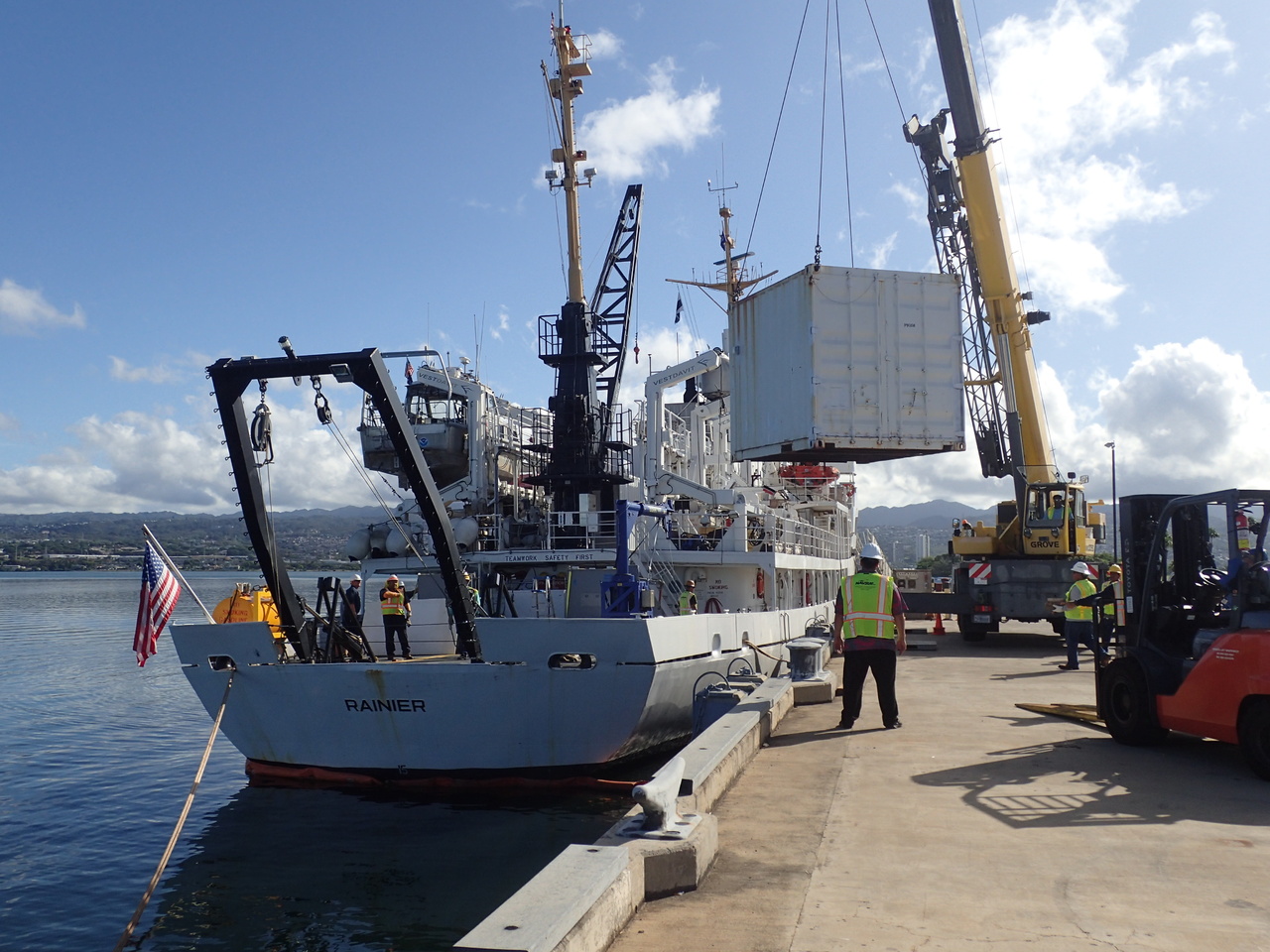 Loading day! Safety officals stand by as a large crane moves our mobile lab from the pier onto the Rainier. The scientists will use this for (air conditioned!) lab space to store and prep gear, as well as process samples from the field. Photo: NOAA Fisheries/James Morioka.

Kicking off the Final Leg! 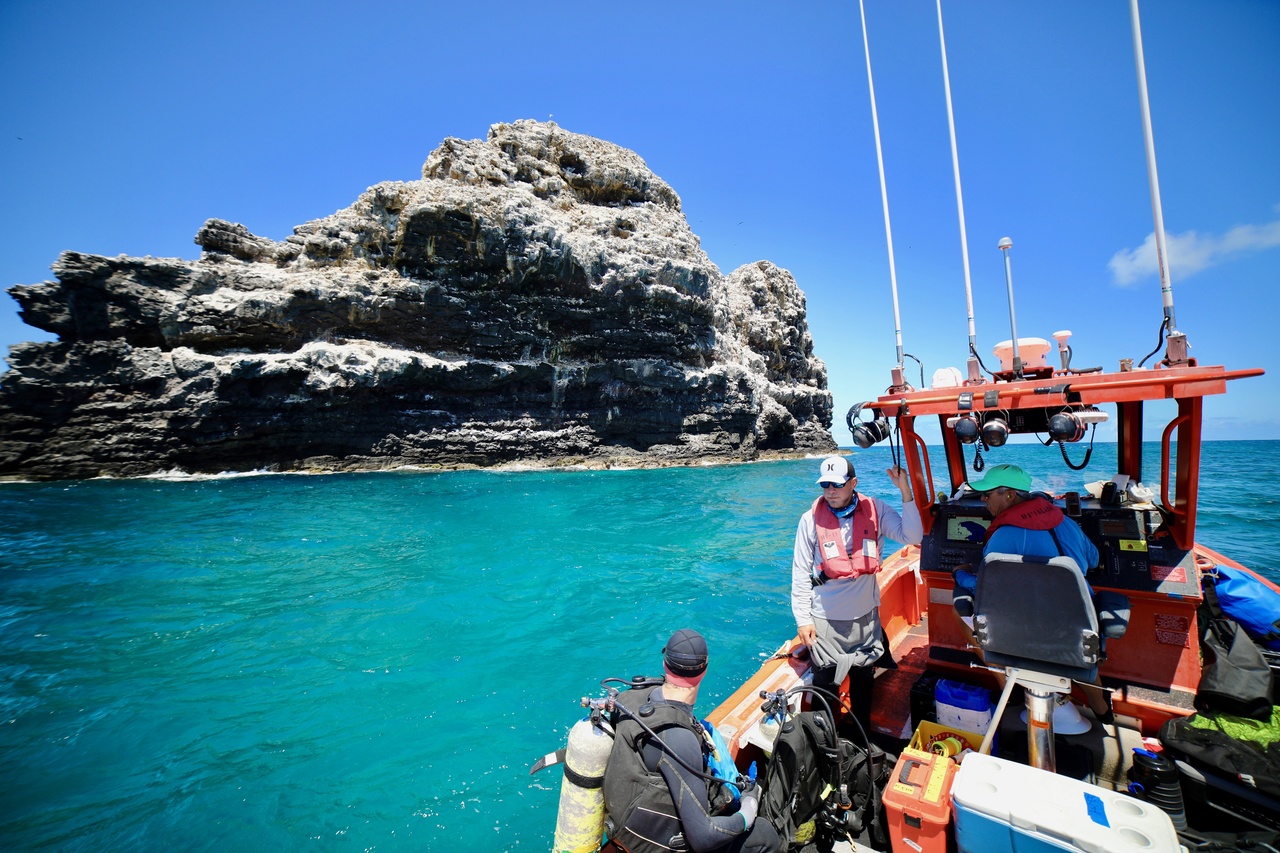 Team member Ari Halperin briefs divers Noah Pomeroy and Morgan Winston about the instrument swap they will conduct as they get ready to start their first dive at La Perouse on Lalo/Kānemilohaʻi/Mokupāpapa, or French Frigate Shoals. Photo: NOAA Fisheries/James Morioka.

See the Team in Action! 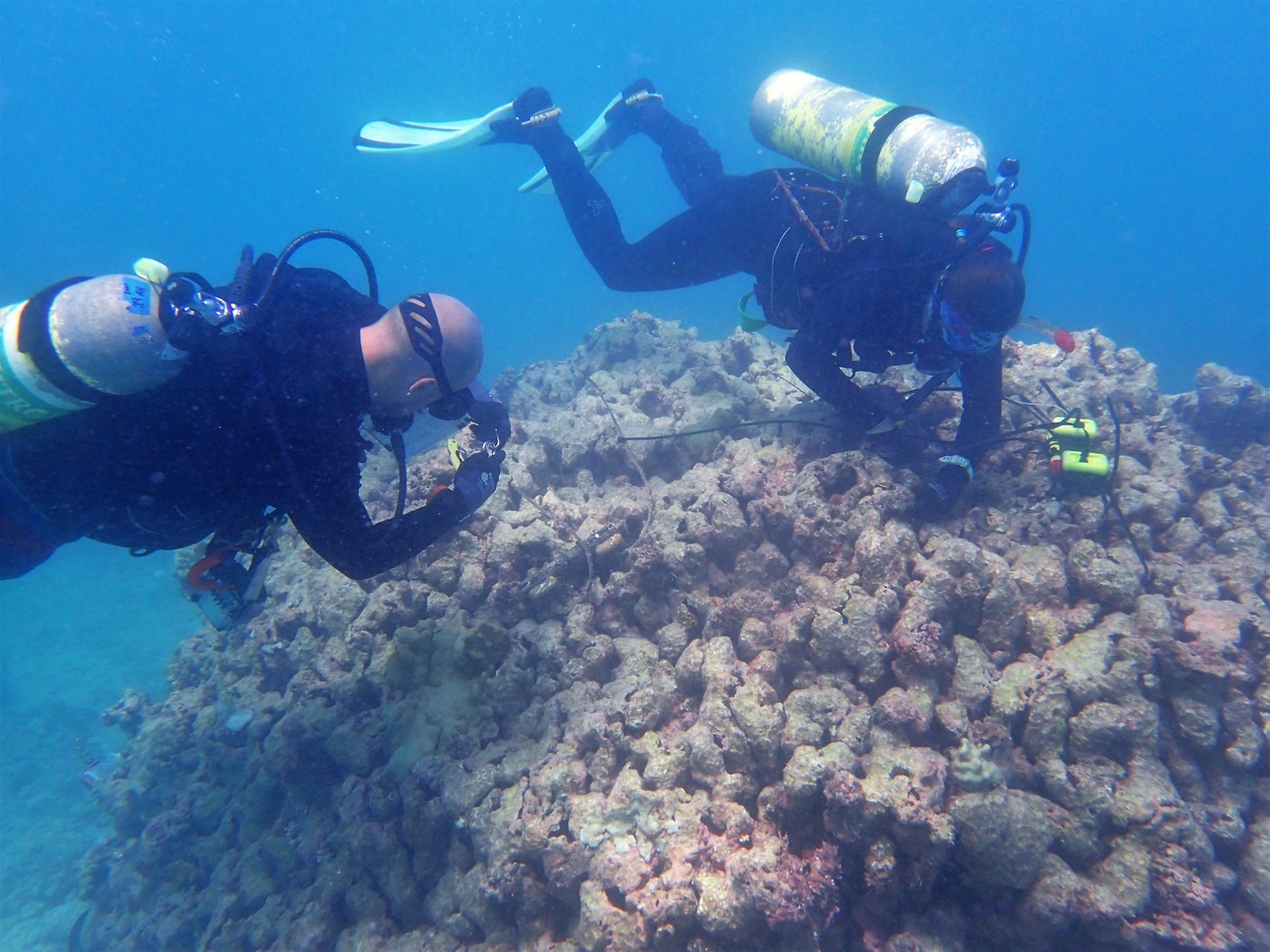 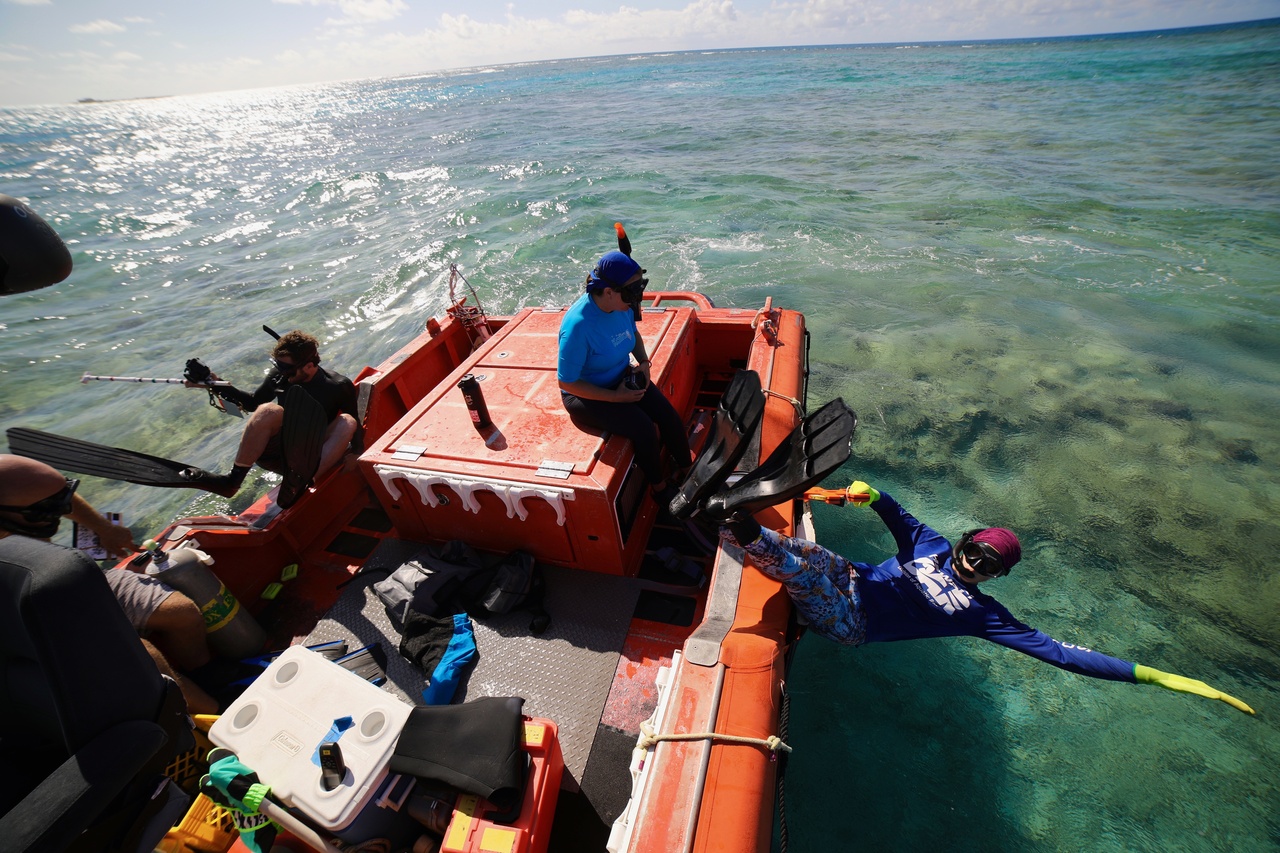 Some Days it's all Rainbows and Unicorn(fish)! 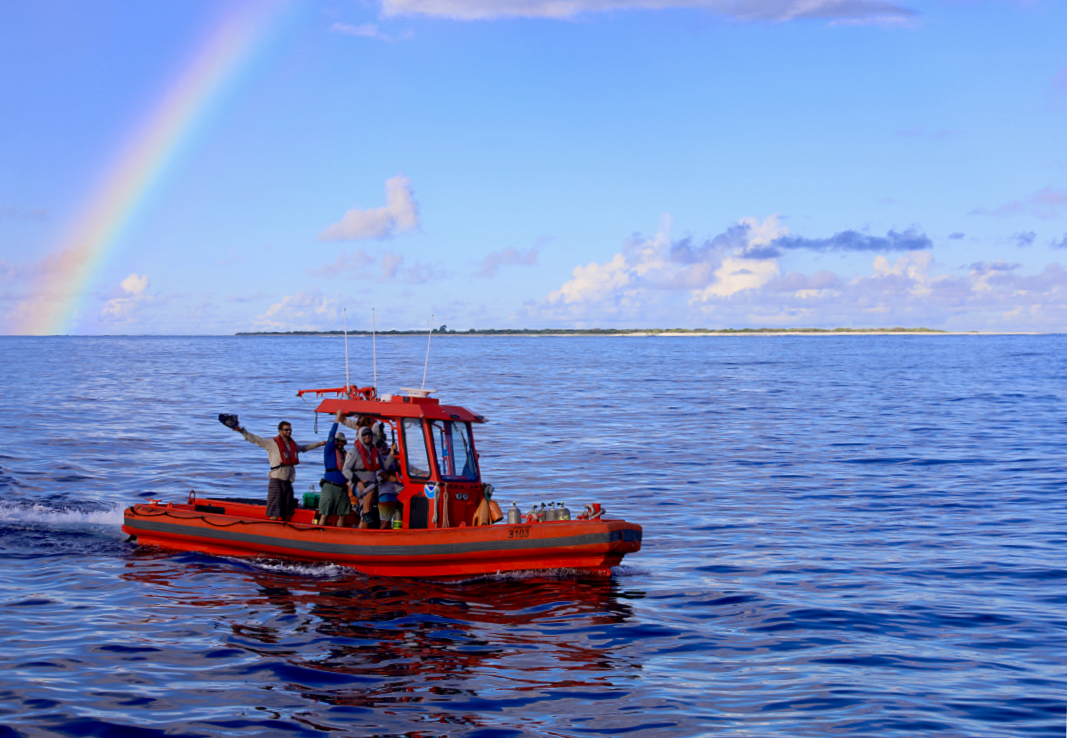 One of the small boats returns to the ship under a rainbow after collecting water samples and deploying instruments around Kure Atoll. Photo: NOAA Fisheries/James Morioka. 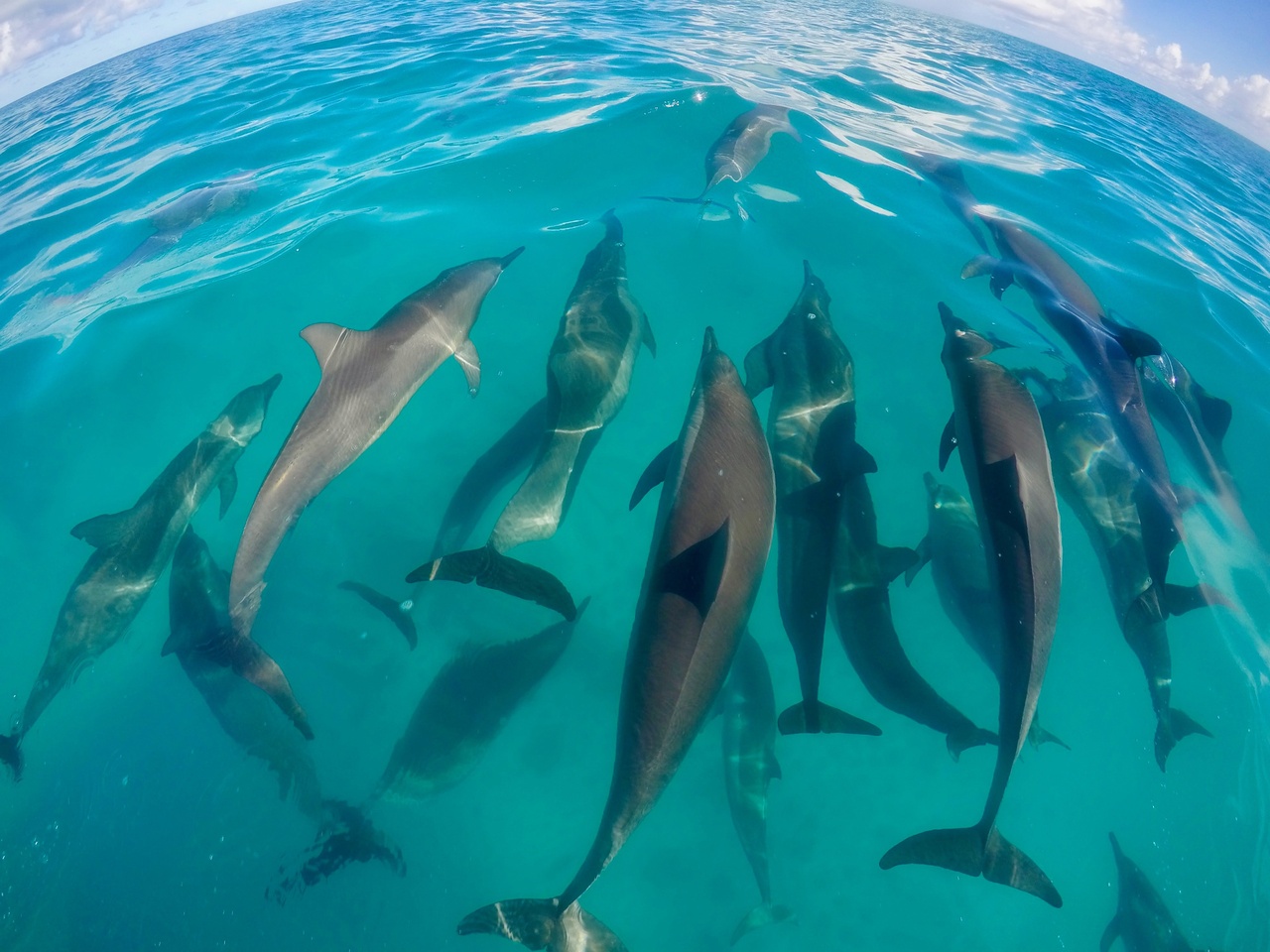 Bottlenose dolphins enjoy the ride as we transit to our next survey site on Kure Atoll. Photo: NOAA Fisheries/James Morioka. 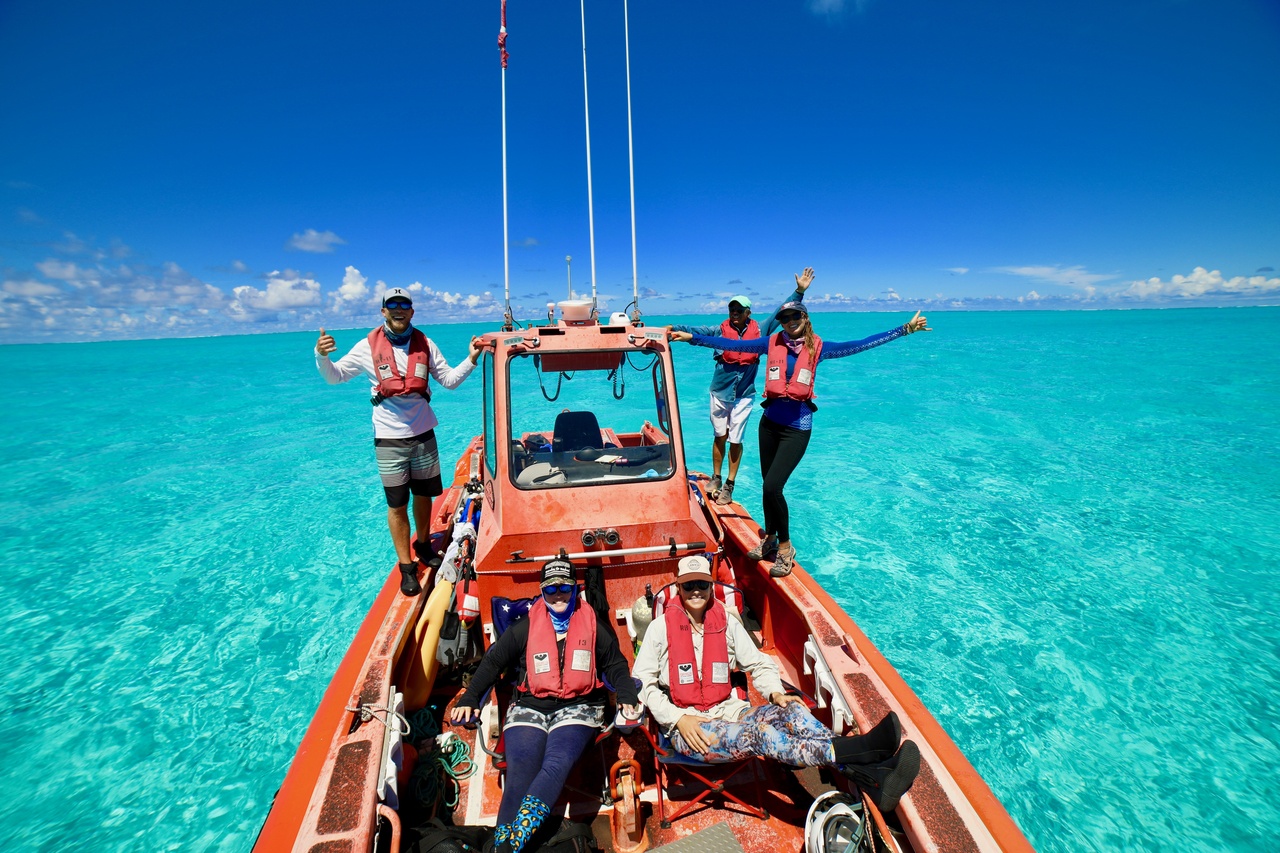 Divers enjoy the beauty of this special place while waiting out their surface intervals before the next survey dive at Kure Atoll. Photo: NOAA Fisheries/James Morioka. 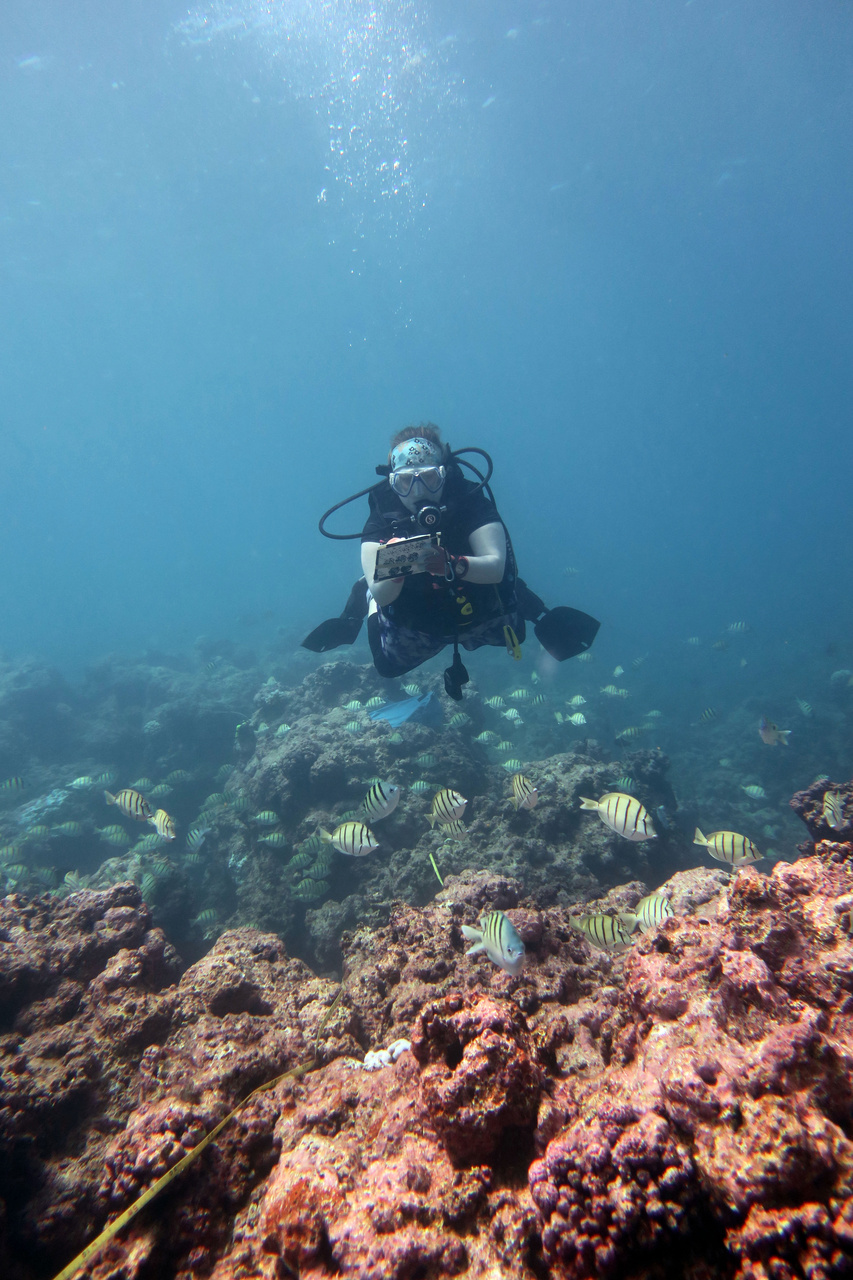 Sometimes you have to wear many hats. Our Chief Scientist Hannah Barkley works hard in the field conducting a coral bleaching survey. She will return to the ship after a day of diving to synthesize data and plan the next day's operations. Photo: NOAA Fisheries/James Morioka.

That's a Wrap! Final Operations of HARAMP 2019 are Complete! 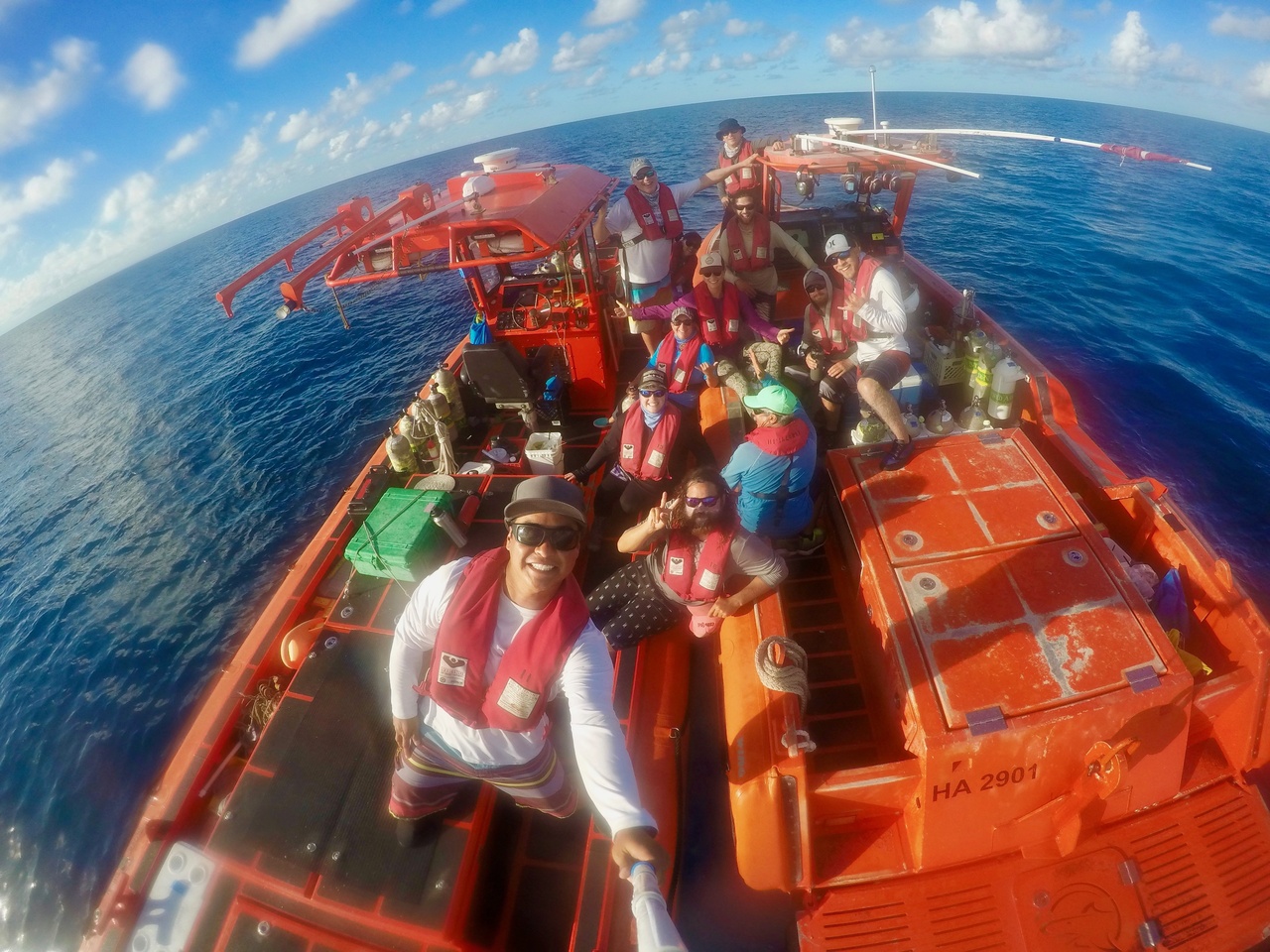 The two survey teams meet up to celebrate another successful RAMP mission while waiting to get picked up by the NOAA Ship Rainier. Well done, team! Photo: NOAA Fisheries/James Morioka.