From April 2–18, 2019, the NOAA Ship Reuben Lasker will attempt to occupy scheduled station locations between San Francisco and San Diego to survey the distributions and abundances of pelagic fish stocks, their prey, and their biotic and abiotic environments in the California Current.

On Thursday, April 18, the NOAA ship Reuben Lasker arrived at the Tenth Avenue Marine Terminal to complete the Spring California Cooperative Oceanic Fisheries Investigations Survey. Of the proposed 75 stations, 69 were occupied over the 17-day survey. The standard spring weather of high winds and high seas kept the group from completing all 75 stations. While the preliminary oceanographic data has yet to be processed, it appears that environmental conditions are favorable for the northern anchovy (Engraulis mordax) population as seen from the continuous underway fish egg sampler samples. While the Pacific sardine (Sardinops sagax) would normally be at their peak spawning period during April, the egg numbers seen during this survey appear low.

As of Friday, April 12, staff completed 47 stations of the Spring California Cooperative Oceanic Fisheries Investigations survey. Anchovy eggs and larvae are still present in large numbers in both the continuous underway fish egg sampler and net tow samples. On the previous Monday, staff amended the track lines to work in the lee of the Channel Islands due to weather. Unfortunately, due to the extended duration of bad weather, the decision was made to go to port in Long Beach for a 24-hour reprieve. Staff are currently heading back out to resume operations. With yet another delay to this survey, it looks like staff will not be able to occupy and complete all of the scheduled stations. The new plan is to complete as much of the pattern as possible before returning to San Diego on Friday, April 18. 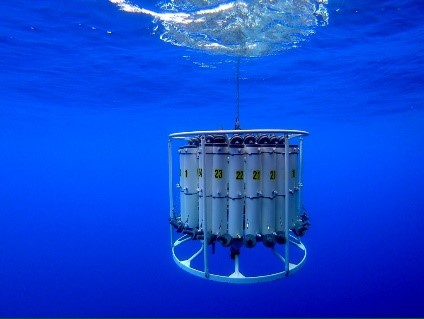 The spring California Cooperative Oceanic Fisheries Investigations survey aboard NOAA Ship Reuben Lasker departed on Tuesday, April 2, and will return on Friday, April 18. The spring California Cooperative Oceanic Fisheries Investigations routinely occupies stations from San Diego to San Francisco, but due to reductions in ship time, the spring survey will occupy the core group of stations within the Southern California Bight. Staff onboard have reported seeing a high abundance and occurrence of late-stage Northern Anchovy larvae in the Continuous Underway Fish Egg Sampler and manta (neuston) samples. These high numbers were found closer to shore (near or inside of San Clemente Island) and lessened as the vessel moved further offshore. Operations continue to progress smoothly and the weather is being unusually cooperative for a spring survey.