Towing the Line: Exploring Deepwater Communities Along the U.S.-Canada Boundary

Join us as we find abundant coral gardens, sponges and anemones! Blog #8 from the Northern Neighbors cruise on the NOAA ship Henry B. Bigelow exploring deepwater communities off the coast of the Northeast U.S. and Atlantic Canada. 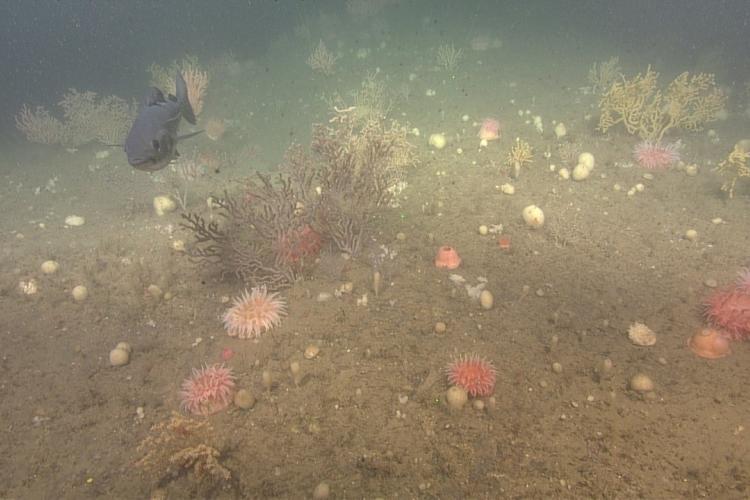 Chief Scientist’s Weather Report: A chance of showers and thunderstorms, then showers likely and possibly a perfect storm of deep-sea coral data.

The U.S. and Canada share Jordan Basin in the Gulf of Maine. In the past we surveyed areas in the basin on both sides of the boundary (the Hague Line), sharing information and data that will help protect deep-sea coral habitats no matter what country they’re in. After all, animals don’t respect boundaries. Like Corsair Canyon and the Northeast Channel (see Mission Logs #4 and #6), the Canadian side of Jordan Basin was declared a “Sensitive Benthic Area.” So, armed with new bathymetric maps that Matt Poti created, thanks to new bathymetric data supplied to us courtesy of the NOAA ship Thomas Jefferson, we set out on June 23 to survey some promising areas on both sides of the line at depths from 230-205 meters. 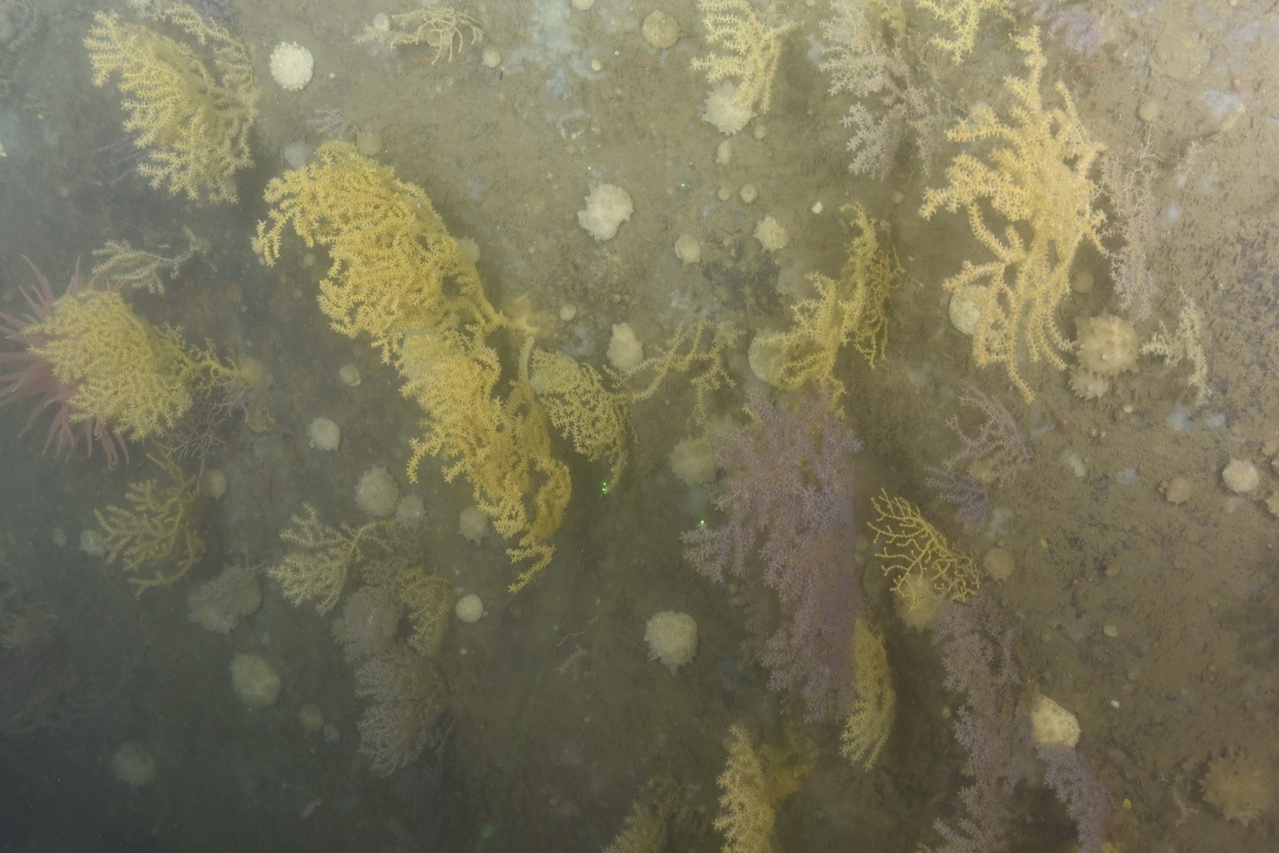 Yellow and purple Paramuricea on a wall on the Canadian side of the north central Jordan Basin, Gulf of Maine. Depth 213 meters. Photo credit: 2019 Bigelow/ROPOS U.S./Canada Transboundary Expedition

We started on the Canadian side, traversing muddy areas and going from rock outcrop to rock outcrop. We weren’t expecting much, but boy were we wrong! Coral gardens everywhere, and as good as we’ve seen in western Jordan Basin and Outer Schoodic Ridges. As usual, there were abundant and often dense colonies of Primnoa on the more vertical sides of outcrops and walls, with abundant yellow and purple Paramuricea on both walls and the more horizontal areas. 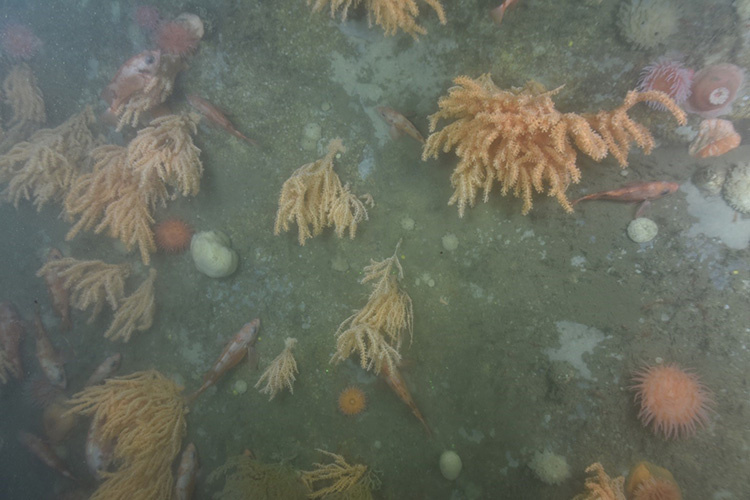 Primnoa and redfish on a wall on the Canadian side of the north central Jordan Basin. Depth 220 meters. Photo credit: 2019 Bigelow/ROPOS U.S./Canada Transboundary Expedition

Sponges and anemones were also abundant, and many redfish hung out in the Primnoa. We made sure to take samples of several of the corals for taxonomic, aging, and genetic studies.

After we surveyed the last site on the Canadian side, we had a long traverse over muddy bottom as we crossed the Hague Line into U.S. waters and headed toward our first series of outcrops. 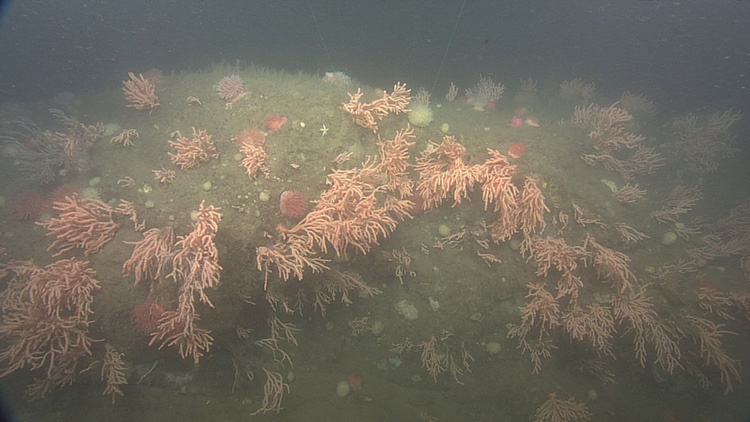 Primnoa on an outcrop on the U.S. side of the north central Jordan Basin. Depth 207 meters. Photo credit: 2019 Bigelow/ROPOS U.S./Canada Transboundary Expedition

Yet again, we were surprised by the abundant and dense stands of corals on the rock outcrops. As an added bonus, we found a couple of small colonies of the white bubblegum coral amongst the Primnoa, a rare sight in these waters. Unfortunately, we also saw a number of plastic bags or other material and lost fishing gear wrapped around and smothering some of the corals. 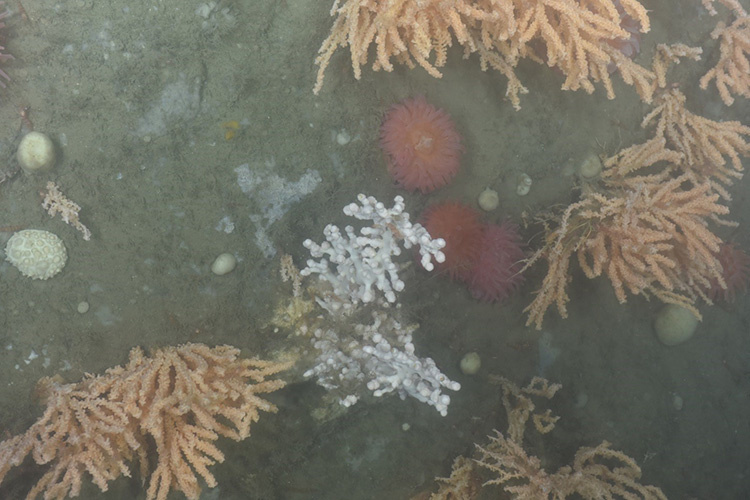 Bubblegum coral (white) and Primnoa (orange) on a wall on the US. side of the north central Jordan Basin. Depth 209 meters. Photo credit: 2019 Bigelow/ROPOS U.S./Canada Transboundary Expedition