From Two Ships to One: The Penultimate Leg of HICEAS 2017

The HICEAS survey continues on the NOAA Ship Reuben Lasker. 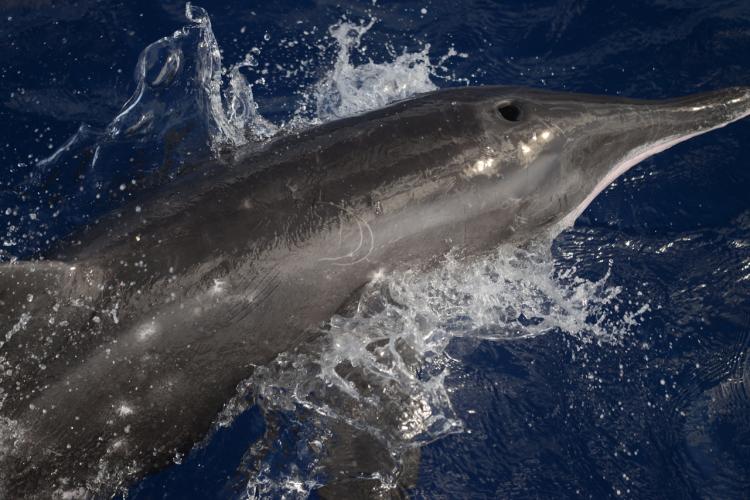 When we last checked in on the progress of the Hawaiian Islands Cetacean and Ecosystem Assessment Survey (HICEAS), one of the two NOAA ships involved in the survey had completed its HICEAS 2017 mission. That is, after three legs totaling 87 days at sea, the NOAA Ship Oscar Elton Sette hung up its HICEAS hat, leaving the NOAA Ship Reuben Lasker to carry the HICEAS torch for two more survey legs. After a six-day in-port, the Lasker departed Honolulu on October 16th and spent 25 days at sea, returning to port on November 9th. The scientists aboard the Lasker conducted visual and acoustic surveys for cetaceans (whales and dolphins) in the region between O’ahu and Midway Atoll, covering 1,529 nautical miles of daytime trackline. We also collected cetacean biopsy samples for genetic analysis, filtered water samples for an eDNA study, deployed sonobuoys to listen for baleen whales, collected oceanographic samples with a conductivity-temperature-depth (CTD) unit, and surveyed for seabirds.

We sighted 44 groups of at least 14 species of cetaceans, including the first minke whale sighting of HICEAS 2017, and collected five biopsy samples from rough-toothed dolphins. Minke whales also stole the show for the acoustics team, when we heard their “boings” on both the towed array and sonobuoy stations for five days straight. We also got our first acoustic detections of fin whales for HICEAS 2017. These detections occurred when we deployed sonobuoys after sighting an unidentified baleen whale. Overall, the acoustics team detected 103 groups of at least 11 cetacean species.

Daytime survey effort (white lines) and cetacean sightings (see legend) made within the Hawaiian EEZ (blue line) during HICEAS 2017 Leg 3 aboard the Reuben Lasker. The red shading is a focus area around the main Hawaiian Islands, and the area shaded in green is the Papahānaumokuākea Marine National Monument, with darker shading where the Monument was expanded in 2016. Credit: NOAA Fisheries

A highlight of Lasker Leg 3 occurred on the morning of November 3rd, during rare Beaufort sea state 1 conditions, when the visual survey team detected a small whale at the surface approximately 970 miles west-southwest of Honolulu. It quickly became apparent that we were looking at a rarely-seen pygmy sperm whale (Kogia breviceps). In 25 years of searching for marine mammals, I have seen pygmy sperm whales fewer than 5 times, and each of those sightings lasted less than 15 seconds. In his recent book on Hawaiʻi’s whales and dolphins, cetacean researcher Robin Baird notes that pygmy sperm whales represented less than 1% of all odontocete (toothed whale) sightings in Hawaiian waters during the course of his team’s research. He also states that this deep-water species is the second most stranded odontocete in Hawaiian waters, which implies that its abundance is considerably greater than the rare visual detections at sea suggest. Pygmy sperm whales are a small species (approximately 10 feet in length) that are cryptic due to their size and slow movements. Individuals are often mistaken for a floating log as they rest motionless at the surface, with only a dorsal fin and part of the back exposed. Pygmy sperm whales are most often encountered singly, although pairs are sometimes detected. Previous research by marine mammal scientist Jay Barlow on the detectability of whales of the genus Kogia (which includes both pygmy and dwarf sperm whales) indicates that the probability of visual detection is close to zero the in sea state conditions commonly encountered during our surveys. On the glassy morning of November 3rd, we watched and photographed an individual pygmy sperm whale rafting at the surface and performing slow, shallow dives. The initial sighting occurred at 8:34 a.m. and our sighting database shows that it was last detected at 9:01 a.m., a sighting duration of nearly half an hour! Due to the extremely calm seas and cooperative behavior of the whale, nearly a dozen people were able to view this animal from the ship’s flying bridge, possibly the greatest number of people to ever simultaneously view this species in the pelagic environment.

Pygmy sperm whale detected on November 3, 2017, approximately 970 miles west-southwest of Honolulu. The bird flying beyond the whale is a White-Necked Petrel, which has a wingspan of approximately three feet. Credit: NOAA Fisheries/Mark Cotter (Permits #20311 and #MB033305-0)

We saw 4,867 seabirds representing at least 36 species during our strip transect effort. Although the average seabird diversity (13 species per day) was lower than the previous two Lasker legs, overall abundance was higher, averaging 214 seabirds per day. Over the course of the leg, we detected a shift in species composition and abundance, as well as a slight increase in some local breeders and a decrease in others, as trans-hemispheric migrants neared the end of their passage through the study area. The results of our feeding flock survey were similar to last leg, but with lower diversity. We recorded 9,639 seabirds of at least 15 species in 51 feeding flocks. The two most abundant species in the feeding flocks were, not surprisingly, the Wedge-tailed Shearwater and the Sooty Tern, together comprising 78% of the total birds seen. We saw several noteworthy seabirds on Lasker Leg 3. The most unexpected was an adult male Nazca Booby that visited the ship for almost two hours, 60 nautical miles north of Nihoa, representing the seventh known occurrence of this eastern Pacific Ocean endemic around the Hawaiian Islands. The Nazca Booby was treated as a subspecies of Masked Booby until being elevated to full species status in 2000. Another surprising sighting was of an immature dark morph Northern Fulmar that was seen about 70 nautical miles northwest of Laysan. Less than five individuals of this species have been seen alive at sea in Hawaiian waters, all in November to March.

Finally, while our daily CTD deployments were generally a pretty routine operation, one night they got a little more interesting.  How, you ask?  You can find out by watching this video, courtesy of HICEAS Acoustician Anne Simonis from the Scripps Institution of Oceanography, UC San Diego. Thanks, Anne!

Folks, the end is in sight. On November 15th, the Lasker set sail on its fourth and final leg of HICEAS 2017. Keep your eyes on the story map for the final details of our five-month survey!

Previous: Who are you? Who, Who? Who, Who? Studying a cryptic marine mammal species by eDNA Next: HICEAS Hilite: [Dolphin] Dinosaurs Still Exist