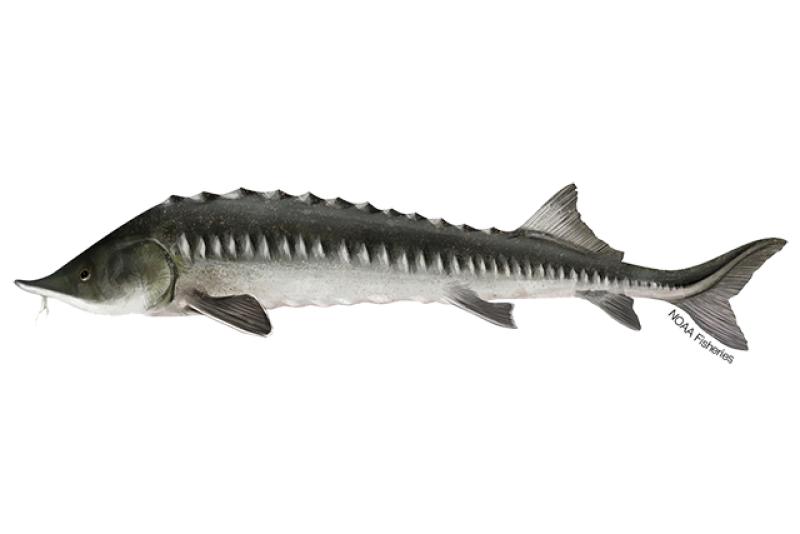 The population of kaluga sturgeon declined more than 80 percent between the end of the 19th century and 1992 as evidenced by reductions in annual catch. Continued significant declines in abundance are indicated by the Lower Amur population dropping from 40,000 individuals in the 1990s to 19,100 individuals in 2011, resulting from the overfishing of spawners. Maintenance of the species by natural reproduction alone has been shown to be inadequate, and therefore the release of hatchery-reared juveniles is necessary to restore the abundance and distribution of the species. While the main threat to the species is poaching of mature females, other potential threats facing the species include climate change and habitat degradation from dams and pollution.

The Kaluga sturgeon is a large species, with mature individuals exceeding 18 feet in length and 1 ton in weight. It has gray-green to black coloring on its back and a yellowish green-white belly. Like all sturgeon, the species has a cartilaginous skeleton, heterocercal caudal fins (upper lobe larger than lower), single spiracle respiratory openings, a bottom-oriented mouth with four barbels (sensory “whiskers”), a flat snout, a strong rounded body, and unique ganoid scales.

Mature kaluga sturgeon migrate from the Amur estuary to the river to breed, mainly during the spring. Kaluga are an active predator and eat freshwater and marine fishes, including smelt, salmon, and herring.

The Kaluga sturgeon inhabits the Amur River from the estuary to the upper reaches and tributaries, as well as marine areas of the Sea of Okhotsk and the Sea of Japan.

Kaluga mature late in life at 14-23 years, spawn every 3-5 years, and can live to 80 years of age. Breeding migrations from the Amur estuary to the river take place between mid-May to mid-June, and mid-August to late September, though the majority of mature individuals migrate during the spring.

Commercial fishing of kaluga was prohibited in the Soviet Union in 1958, and the species has since only been collected for hatchery breeding and to monitor the status of the population. Despite these protections, poaching in Russia and legal commercial harvest in China continue to threaten the species. Selective poaching of large, mature females has also resulted in the population’s highly male-skewed sex ratio and resulting decline in fecundity.

The kaluga sturgeon is listed as endangered under the Endangered Species Act.

In 2012, WildEarth Guardians and Friends of Animals petitioned NOAA Fisheries to list 15 foreign sturgeon species under the Endangered Species Act. After completing a status review, we proposed to list five of the foreign sturgeon species as endangered, including the kaluga sturgeon, and requested public comment. In 2014, we listed the kaluga sturgeon as endangered under the Endangered Species Act.