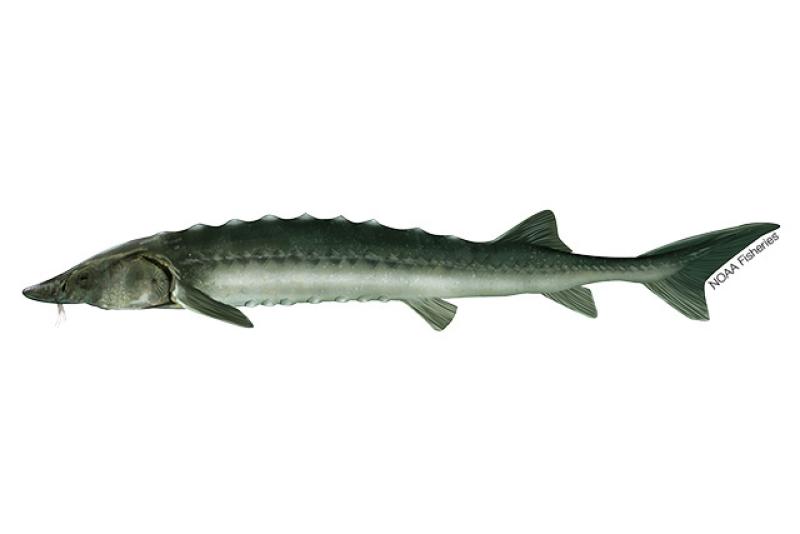 Sakhalin sturgeon can grow up to 8 feet in length and weigh up to approximately 330 pounds. The species has olive to dark green coloring on its back, a yellowish green‐white belly, and an olive‐green stripe on its side between the lateral and ventral scutes. Like all sturgeon, the species has a cartilaginous skeleton, heterocercal caudal fins (upper lobe larger than lower), single spiracle respiratory openings, a bottom-oriented mouth with four barbels (sensory “whiskers”), a flat snout, a strong rounded body, and unique ganoid scales.

Sakhalin sturgeon feed in waters of oceanic salinity and migrate to spawn in freshwater in the spring. The species feeds mainly on shrimp, crabs, worms, amphipods, isopods, sand lance, and other fishes.

The Sakhalin sturgeon’s historical breeding distribution included small coastal rivers of the Russian Federation (Suchan, Adzemi, Koppi, Tumnin, Viakhtu, and Tym rivers), and the Ishikari and Teshio Rivers of Hokkaido, Japan. Currently the species is only known to breed in the Tumnin River no further than 100 km upstream of the estuary, and feed in the Sea of Japan from the Amur Liman and the Tatar Strait south to the Tumen River. One mature male was caught in the Viakhtu River, Sakhalin in 2011.

The species reaches maturity between 8 and 10 years of age and spawns in June through July in the Tumnin River.

Sakhalin sturgeon habitat is degraded by pollution from oil production, agriculture, and mine operations. The species is also bycaught in estuaries and bays in commercial fixed nets and gill nets targeting salmon and other fish, and is illegally fished primarily during its spawning migration.

The Sakhalin sturgeon is listed as endangered under the Endangered Species Act.