Recovery of endangered fish populations in the Central Valley cannot be achieved without re-establishing populations back into the historical habitats. 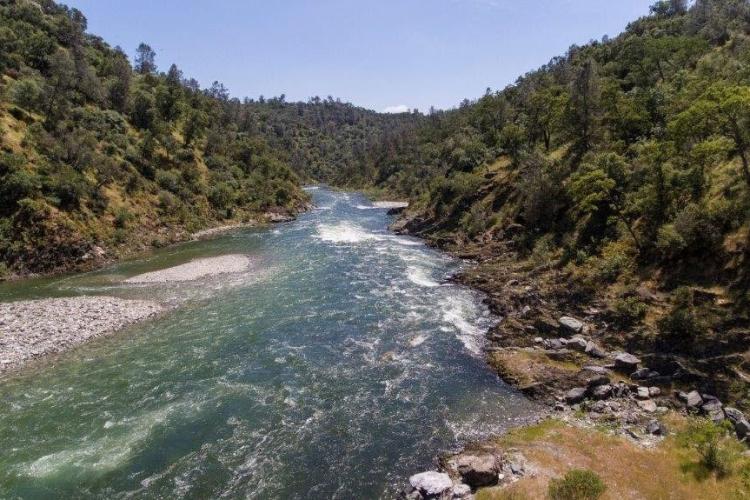 With rising temperatures and a greater demand on water resources, NOAA Fisheries has identified reintroduction, or the intentional movement and release of endangered salmon back into their historical upstream habitat, as the only way to ensure their long-term conservation and recovery.

Today, steelhead and two populations of salmon (winter-run and spring-run Chinook) in California’s Central Valley are listed as threatened or endangered under the federal Endangered Species Act. These salmon and steelhead, known as salmonids, require cold water to survive hot summers, but dams block access to historically high quality habitat in high elevation areas, and the only habitat available to these fish is often of poor quality.

Dams Have Cut Off Salmonids 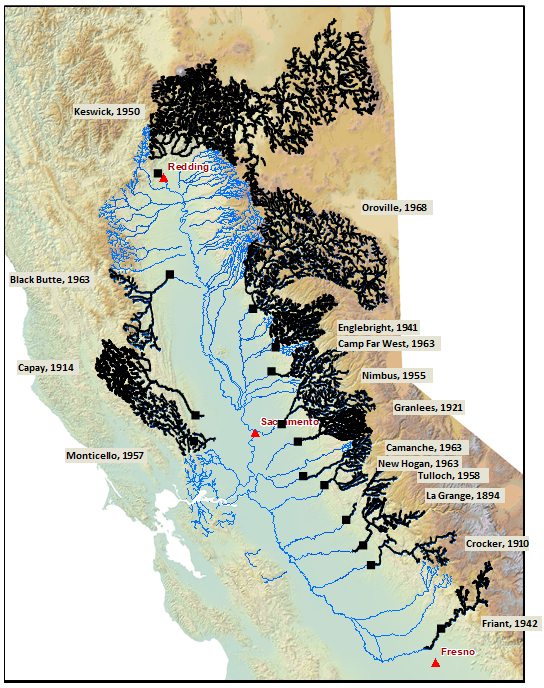 This is a map of the streams and rivers in the California Central Valley. The blue lines represent rivers and streams accessible to salmonids, while the black lines represent historical habitat that can no longer be accessed by salmonids due to a dam. Salmonids have access to only a fraction of their historical habitat. They are currently cut off from cold, clean, high-elevation streams they need to increase their populations and be resilient to climate change.

Barriers such as dams have cut off salmonids from 95% of the historical habitat. Dam construction between 1894 and 1968 has prevented fish from reaching high-elevation mountain streams where water is kept cool by melting snow. Instead, today fish are stuck below the dams on the valley floor. When salmonids spawn, their young depend on cold, clean water to survive. If they are restricted to lower elevation spawning areas below a dam, warmer water threatens their continued survival and leaves them highly vulnerable to the effects of a warming climate.

Recovery of endangered fish populations in the Central Valley cannot be achieved without re-establishing populations back into the historical habitats that they are adapted to. In 2014, NOAA Fisheries released a recovery plan, analyzing the state of these species and detailing steps that were necessary for their recovery:

In order to meet these needs, NOAA Fisheries determined that reintroducing these species into their native habitat, coupled with the restoration of native floodplains, is essential to support healthy, resilient populations. With no way of getting upstream on their own, the endangered salmon must depend on us to get them there. 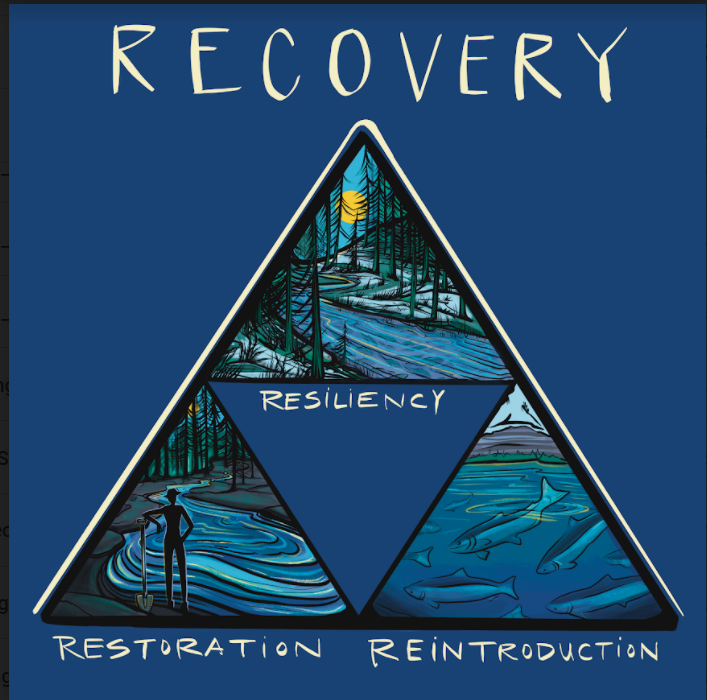 To learn more about reintroductions:

Winter-run Chinook salmon are one of the NOAA Fisheries Species in the Spotlight because they are in danger of going extinct. They are the only Chinook salmon species that migrate in the winter as adults and then spawn in the summer. They only live in one place, the upper Sacramento River.

Winter-run Chinook salmon are one of the NOAA Fisheries Species in the Spotlight because they are in danger of going extinct. They are the only Chinook salmon species that migrate in the winter as adults and then spawn in the summer. They only live in one place, the upper Sacramento River.

During the 2012-2016 drought, Shasta Dam lost its cold water pool which resulted in warm water releases to the winter-run Chinook salmon spawning grounds on the Sacramento River near the City of Redding, California. The warm water resulted in the death of between 95-98% of eggs and recently hatched salmon incubating in their redds (nests). In contrast, water temperatures in the McCloud River above Shasta Dam remained suitable throughout the drought; if the fish had been able to access these waters, survival rates would have been much higher. 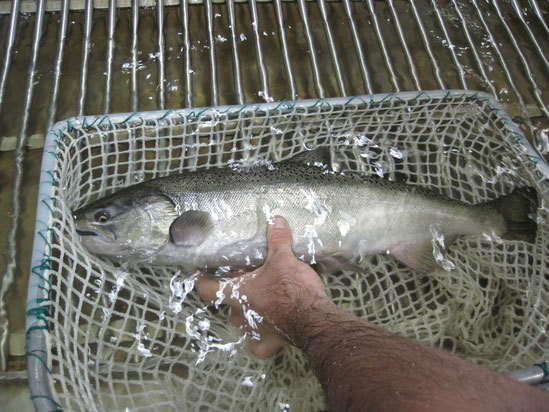 A winter run salmon returned to Battle Creek. These fish were among 214,000 juveniles released last spring as part of a program aimed at bolstering the endangered fish’s population after extreme drought in 2014 and 2015 nearly wiped out the entire in-river juvenile population. Photo: NOAA Fisheries

In 2018, 215,047 juvenile fish from Livingston Stone National Fish Hatchery were released into Battle Creek with the hopes that they would expedite a planned reintroduction effort into that tributary in the Upper Sacramento Watershed. As of January 2021 over 1,000 subadult and adult fish returned, showing a successful start to establishing a population outside of the mainstem Sacramento.

Establishing a self-sustaining population of Sacramento River Winter-run Chinook salmon in a second watershed (in addition to population in Sacramento River), such as Battle Creek, is a high priority and a major component of the Central Valley salmonid recovery plan. 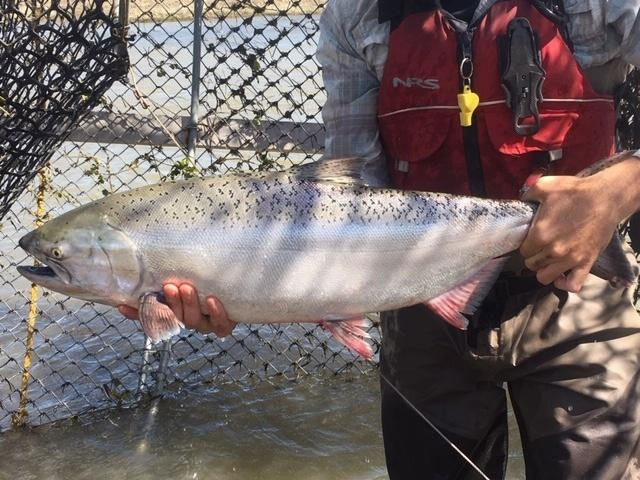 First adult Central Valley spring-run Chinook to return to the San Joaquin River, since they were experpated. Photo Credit: BOR

For over ten years the agencies and individuals in the SJRRP have been working to reintroduce Central Valley spring-run Chinook to the San Joaquin River. In 2019 adult spring-run returned to the river and for the first time in over 65 years they were allowed to complete their life cycle in the southern extent of their range. This budding population still faces many challenges but three consecutive years of adult returns is the beginning of a reintroduction success story and will help to boost recovery and resiliency of Central Valley spring-run Chinook. Visit the SJRRP’s website to learn more. 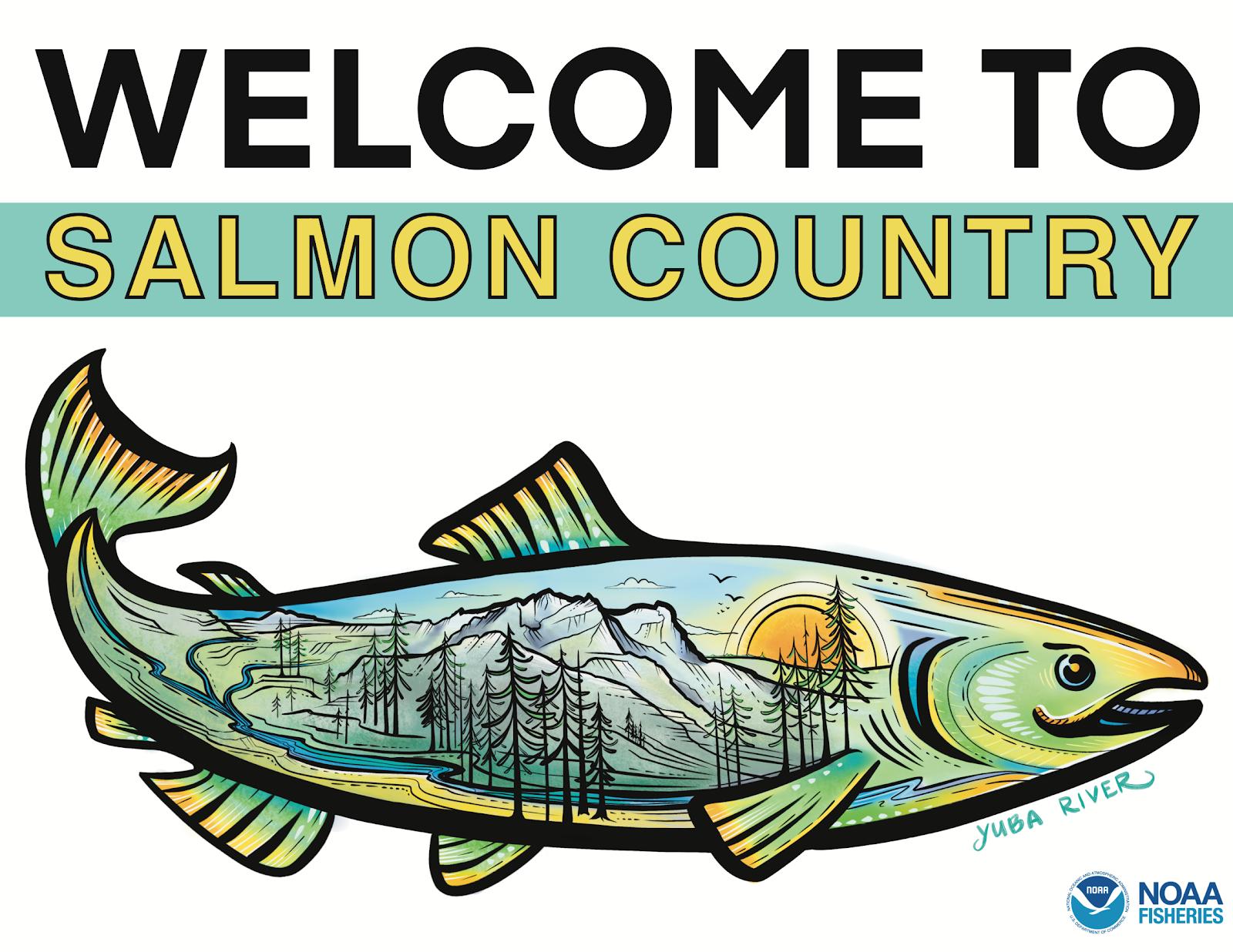 Although salmonids are currently extirpated from the upper Yuba River, they used to travel and hold in the upper parts of the river, making the Yuba River above Englebright Dam “Salmon Country! Credit: Stephanie Fogel. Download "Welcome to Salmon Country" signs.

Following construction of Englebright Dam in 1941, spring-run Chinook salmon (and steelhead) were blocked from accessing high-elevation, cool-water habitat in the upper Yuba River. Currently, the population returns to the lower Yuba River and spawns below Englebright Dam. The feasibility of a successful reintroduction effort has been the subject of many studies and evaluations by a wide consortium of partners for almost twenty years. NOAA Fisheries and the California Department of Fish Wildlife are working with a variety of partners to build on past efforts and determine the most cost-effective methods for initiating an upper Yuba River reintroduction program, guided by the best available science and management techniques.

To pave the path forward for reintroduction, NOAA Fisheries has initiated a rule-making process under section 10(j) of the ESA to address stakeholder regulatory concerns of a Central Valley spring-run Chinook salmon reintroduction. This effort demonstrates a strong commitment to ensuring the future success of a reintroduction while protecting landowners and other stakeholders and their current lawful activities. Although funding for reintroduction has not yet been identified, we believe formulation of a plan guided by science can ultimately be funded. The quality and abundance of habitat above Englebright Dam offer exceptionally promising possibilities for the successful reintroduction of an independent population of spring-run Chinook salmon.