California salmon reintroduced to their historic habitat as juveniles are returning to spawn. This is the first time in decades. 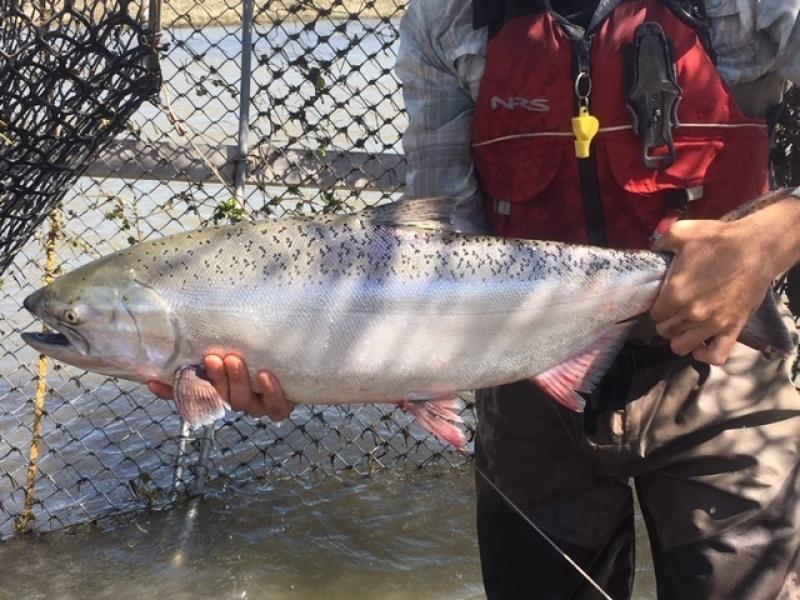 California salmon reintroduced to their historic habitat as juveniles are, for the first time, returning to their home rivers to spawn. Their journey home demonstrates that fish reintroductions can successfully return Golden State salmon to restored rivers and streams in an important step toward their recovery.

More than 25 threatened spring-run Chinook salmon have returned to the San Joaquin River so far this year, the first spring-run salmon to swim up the river in more than 65 years. On Battle Creek to the north, at least 50 endangered winter-run Chinook salmon reintroduced in 2018 have also returned—the first to return to the creek since dams built in the early 1900s blocked and damaged their habitat.

Extensive habitat restoration by many partners on both the San Joaquin River and Battle Creek will help support the returning Chinook salmon, promoting recovery of these species.

“The return of these fish demonstrates that our collective efforts to restore the river and reestablish Chinook salmon are working,” said Erin Strange, San Joaquin River branch chief in NOAA Fisheries West Coast Region, who has worked toward reintroduction of spring-run salmon to the San Joaquin for 10 years. “While we celebrate this success, we continue to pursue our ultimate goal of a fully restored river with self-sustaining salmon populations. We are one step closer to that today."

As many as 600,000 spring-run Chinook salmon once returned to California’s Central Valley, making up almost 20 different populations on individual rivers. Then, Friant Dam on the San Joaquin River and other obstacles cut off some 90 percent of their historic habitat. Today, only three wild populations remain, leaving the species threatened with extinction.

The San Joaquin River Restoration Program is seeking to turn that around by improving habitat, restoring flows, and reintroducing juvenile fish to the river. Biologists have released thousands of juvenile spring-run salmon to the river since 2014; those are the fish now returning from the ocean as adults. While monitoring has counted about 25 returning fish, more fish likely have returned without being detected.

Biologists must truck the returning fish around obstacles in some sections of the river while the program pursues the ultimate goal of a barrier-free river the fish can transit on their own.

“Reintroduction is our best hope of restoring California’s salmon, and these returns give us confidence that we will again see sustainable salmon runs in more California rivers,” said Maria Rea, Assistant Regional Administrator for NOAA Fisheries’ Central Valley Office. “Recovery of these salmon populations will support the state’s economy and may ultimately allow more flexibility in managing river flows that are now dedicated to the fish.”

Last year, biologists released juvenile winter-run Chinook salmon in Battle Creek to “jumpstart” their reintroduction to historic habitat. The releases followed a prolonged and severe drought in California’s Central Valley that severely reduced natural production of winter-run Chinook salmon in the Sacramento River in 2014 and 2015, increasing their risk of extinction.

The jumpstart release accelerated the timeline for reintroducing winter-run Chinook to Battle Creek to improve the resiliency of the population.

In addition to the approximately 50 fish that have returned to Battle Creek this year, biologists expect more fish from releases in 2018 and 2019 to return in coming years once they grow and mature in the ocean. The returning fish will help diversify the stock by spreading the risk beyond the single remaining population in the mainstem Sacramento River.

The construction of Shasta Dam, about 75 years ago, blocked winter-run Chinook salmon from much of their historic mountain habitat, relegating them instead to a low-elevation stretch of the Sacramento River below the dam. That leaves the salmon exposed to high summer temperatures that put eggs and fry at risk. Water managers release cool water from Shasta Dam upstream to help protect those offspring.

NOAA Fisheries’ recovery plan for winter-run Chinook salmon calls for reintroduction of the fish to Battle Creek and other high-elevation streams such as the McCloud River above Shasta Dam. This will give the fish safer footholds in cool-water habitat as climate change warms the exposed Sacramento where they have spawned since construction of the dam.

“The key to the recovery of these fish is to reestablish them in waters where they can survive and thrive again,” Strange said. “They have persevered this long, and now they are showing us that they will take advantage of that habitat if they get the chance. We have a lot more work to do, but the returns this year show that goal is in reach.”

California salmon successfully reintroduced to their historic habitat as juveniles are, for the first time, returning to their home rivers to spawn in an important step toward their recovery.

Their journey home demonstrates that fish reintroductions can successfully return Golden State salmon to restored rivers and streams in an important step toward their recovery.