In 2018, response efforts were conducted to aid and monitor two members of the Southern Resident killer whale population, J50 and J35. The following provides information on these response efforts.

In August and September 2018, an international team of biologists mobilized and responded to an emaciated and ailing three-year-old killer whale (born December 2014), J50, also known as Scarlet, of the critically endangered Southern Resident population. Scientists observing her agreed that she was in poor condition and was unlikely to survive. Responders from NOAA Fisheries and partner organizations explored options ranging from no intervention to providing medical treatment and prepared contingency plans to potentially rescue her and provide short-term care in the event she stranded or separated from her pod. Unfortunately, she has not been seen since mid-September 2018 and is presumed dead.

Also in August, an adult female in J pod, J35, also known as Tahlequah, carried her dead calf for approximately 17 days after it died shortly after birth on July 24, 2018. NOAA Fisheries and the emergency response team monitored her condition.

NOAA Fisheries hosted meetings in Washington State in September to hear from the public about the J50 response and broader action to recover Southern Resident killer whales. View the meeting questions and answers and response to comments.

J50 and J35 Timeline of Events 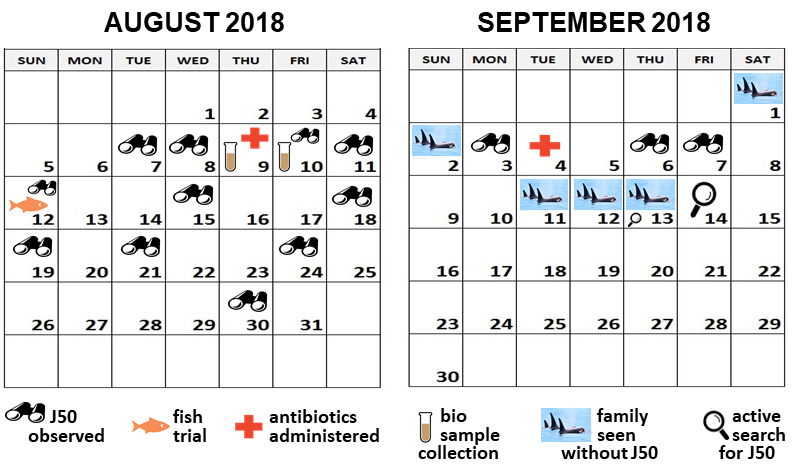 How You Can Help Protect and Recover the Southern Residents

There are many things we can all do at home, school, and work to improve the environment and waters on which killer whales, salmon, and other marine species depend.

Southern Resident killer whales are one of eight marine species most at risk of becoming extinct, so NOAA Fisheries designated them as a Species in the Spotlight. There are now only 75 Southern Resident killer whales, down from a peak of 98 in the 1990s. An action plan details priority actions to help them recover and addresses the three key threats to their survival:

Vessel noise and disturbance can disrupt the whales’ communication and feeding, as well as increase the energy they expend, so extra efforts to minimize noise and interactions can be beneficial. Vessels are required at all times to stay at least 200 yards from killer whales and stay out of their paths per federal regulations.

Many Chinook salmon runs that the Southern Resident killer whales eat are also listed under the Endangered Species Act. Efforts to recover these salmon will also benefit the whales. In July, NOAA Fisheries and the Washington Department of Fish and Wildlife developed a list of Chinook salmon stocks that are important to the whales’ recovery to help inform Chinook salmon recovery and habitat restoration efforts.

Some things you can do to help protect and restore salmon habitat include conserving water and electricity; reducing pesticide and fertilizer use and preventing their runoff into waterways; and volunteering with your local stream or watershed group to plant native species, clean up litter, and remove invasive species.

Reducing pollution in West Coast rivers and coastal waters is also needed to help the whales and the salmon they eat. The main contaminants of concern are PCBs (e.g., found in plastics, paints, rubber, electrical equipment), DDT (found in pesticides), and PBDEs (fire retardant chemicals found, for example, in mattresses, TVs, toasters). During times of nutritional stress, the effects of the high levels of contaminants in this top predator can compromise their health by impairing immune function and interfering with reproduction.

Partners in the J50 Response

NOAA Fisheries administers the permit to conduct this response under a Marine Mammal Protection Act and Endangered Species Act Scientific Research and Enhancement Permit issued through the Marine Mammal Health and Stranding Response Program. We authorized a network of organizations along the West Coast to respond when whales are in distress or entangled — the West Coast Marine Mammal Stranding Network.

Responders on this effort:

A dedicated group working both on-the-water and behind-the-scenes was involved in responding to J50. The team drew upon the world’s top experts from governments, tribes, academia, the private sector, and non-profit groups, who have deep connections and years of experience with these whales. These groups are valuable partners with us working on recovery of Southern Resident killer whales and are integral to long-term research and solutions.

If you have questions or suggestions, contact us at: KillerWhale.Help@noaa.gov