WhaleWatch is a NASA-funded project coordinated by NOAA Fisheries' West Coast Region to help reduce human impacts on whales by providing near real-time information on where the whales occur and hence where whales may be most at risk from threats, such as ship strikes, entanglements, and loud underwater sounds.

WhaleWatch is a NASA-funded project coordinated by NOAA Fisheries' West Coast Region to help reduce human impacts on whales by providing near real-time information on where the whales occur and hence where whales may be most at risk from threats, such as ship strikes, entanglements, and loud underwater sounds. These model estimates were developed from habitat-based models of whale occurrence that combine satellite tracking of whales with information on the environment and can be used by ship captains to identify whale hot spots to avoid.

WhaleWatch is an automated tool that uses advanced technologies to predict where blue whales are likely to be in near real-time. Whales were tagged with Argos satellite transmitters and tracked as they moved from the eastern central Pacific breeding grounds to their feeding grounds off the U.S. West Coast. The whale locations were combined with environmental data collected via satellites, including water temperature, chlorophyll concentrations, and other ocean features like wind speed. The relationship between whales and these environmental data was then used to predict the chance of blue whale occurrence and likely densities across the modeled areas. This is calculated based on current ocean conditions to provide the near real-time maps. In other words, if there were areas where blue whales occurred in the past that correlated with certain levels of the environmental factors (e.g. chlorophyll concentrations), then the model would predict a higher likelihood of blue whale presence in an area that showed those same levels.

Values are per 25 x 25 km (approximately 13 x 13 nmile). Red colors represent higher occurrence and blue colors represent lower occurrence. These predictions are only estimates based on the models developed from historical data and do not represent actual recorded sightings or current densities. In this version, the model predictions are based on monthly products of the environmental data. An update is underway to automate daily predictions at 10km scale using real-time modeled ocean conditions, which would improve the responsiveness of our tool (see Abrahms et al. 2019).

Please see the WhaleWatch Prediction Archive for images of past predictions. 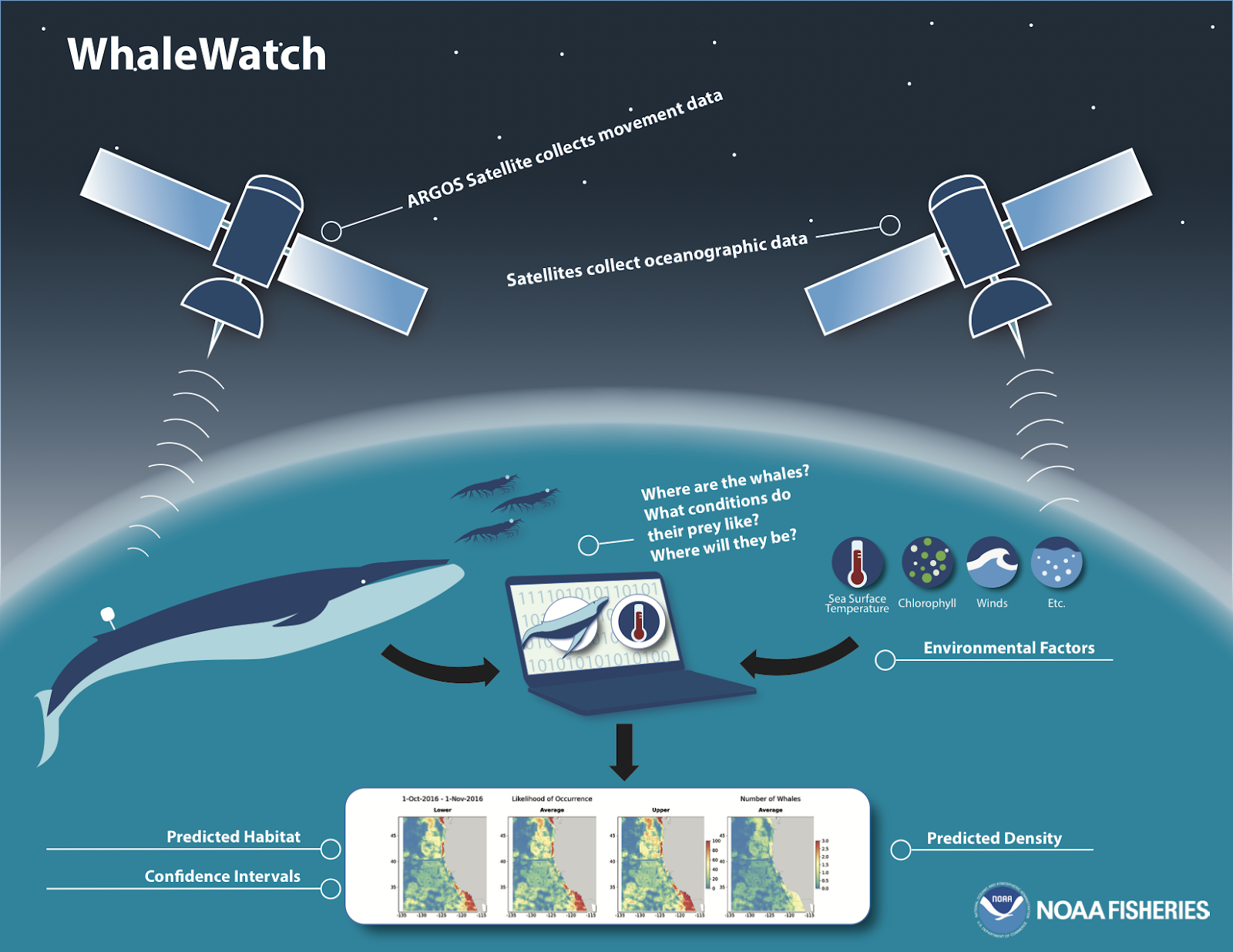 This research has been conducted by a multi-institutional team of academic groups and governmental organizations led by Helen Bailey (University of Maryland Center for Environmental Science) and in collaboration with the NOAA Fisheries West Coast Region.

Funding for this project was provided under the interagency NASA, US Geological Survey, National Park Service, US Fish and Wildlife Service, Smithsonian Institution Climate and Biological Response program, Grant Number NNX11AP71G. Funding for whale tagging was provided by the Office of Naval Research, the Marine Mammal Institute at OSU, and the Sloan, Packard and Moore Foundations to the Tagging of Pacific Predators Program.