Abalone Research in the Southwest

This research focuses on our local abalone species to develop methods to support and expand commercial aquaculture in the region as well as aid in restoration programs for federally endangered black and white abalone.

Seven species of abalone (Haliotis spp.) occur off the west coast, including the white (H. sorenseni), black (H. cracherodii), red (H. rufescens), pink (H. corrugata), green (H. fulgens), pinto (H. kamtschatkana), and flat abalone (H. walallensis). Abalone belong to a group of herbivorous marine snails in the family Haliotidae. Once being plentiful off the coast of California and supporting a lucrative fishery, intense commercial harvesting starting in the 1960s and 1970s, resulted in a steep decline in the populations.

In 1997, California closed all commercial and recreational harvest of abalone except for a highly regulated recreational fishery for red abalone north of San Francisco. Abalone populations are still decreasing in part due to illegal harvesting, disease, and the failure to reproduce in the wild due to their low densities. The white abalone was listed as a federally endangered species in 2001, followed by the black abalone being listed in 2009.

Commercial abalone aquaculture has greatly expanded over the past decade, becoming a thriving global industry valued at over $100 million USD. Abalone is one of the few species where culture production dominates the global market as a result of increasing demand and declining natural stocks from overexploitation and disease. United States abalone production is also growing due to high market value and demand. Most farms operating in California utilize the native red abalone while farms in Baja California, Mexico culturing red, green, and pink abalone.

The Genetics, Physiology, and Aquaculture Program’s research focuses on our local abalone species to develop methods to support and expand commercial aquaculture in the region as well as aid in restoration programs for the federally endangered white and black abalone. These foci often overlap with research on red abalone, pink and green abalone being used to guide restoration efforts for the two endangered species.

Next generation sequencing technology has opened the door for a broader examination of existing genetic information as well as providing the means by which exploratory genetic research may be conducted on abalone. The GPA Program is currently working to create the first de novo red abalone genome assembly for both male and female specimens. This research will enable the identification of candidate genes/markers of interest for marker-assisted selection in a culture setting. The ability to selectively target beneficial traits will help improve aquaculture practices in the U.S. abalone industry.

The Program is also working on generating pseudo-genomes for five additional abalone species that are found along the west coast of the United States, including the white and black abalone. This research will improve our understanding of sex-determination, thermal/environmental preference, disease resistance, hybridization outcomes, and local adaptation among these species that have different environmental preferences and physical ranges. The research will help to provide a better understanding of commercially important traits, and guide restoration and wild stock enhancement along the west coast for these species.

Whole genome variation is also being examined in cultured white abalone and compared to specimens collected from the wild. For restoration to succeed, it is important to quantify the loss of genetic diversity in the cultured populations, and to test whether culture-based selection may be acting on some genes. This will help to evaluate steps going forward to improve white abalone restoration and develop breeding strategies to maximize the diversity in spawning crosses using the available abalone. 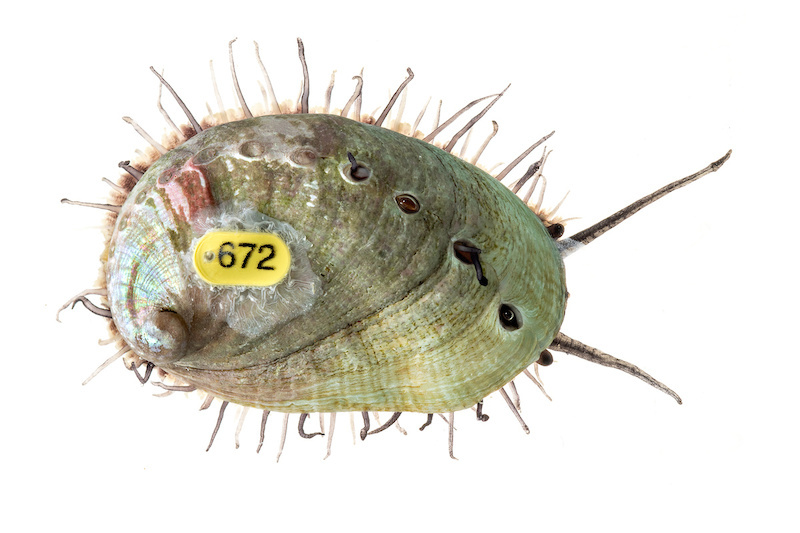 The Genetics, Physiology, and Aquaculture Program has recently begun physiological research on abalone to help understand how environmental parameters (e.g., dissolved oxygen, pH, temperature) affect growth, development, and survival. Such data are critical not only for optimizing growout conditions for captive-rearing programs for abalone stock enhancement, but also for defining the essential habitat for outplanting efforts. Specifically, by understanding the environmental parameters that promote survival and health we can better guide the timing and selection of outplanting sites to maximize survival and ultimately successful spawning, recruitment, and growth of abalone in the wild.

Broodstock abalone in the Southwest Fisheries Science Center aquarium are housed in various fiberglass tanks sized from 115 - 800 liters in volume. Water quality measures and general husbandry are performed daily to ensure the health of the animals. Different lighting sources and controlled photoperiod are also used in order to determine optimal broodstock conditions to maximize spawning potential.

Staff have successfully spawned all abalone species in the aquarium, with the exception of intertidal black abalone (currently under investigation). To assist with successful culture and grow out of abalone species, the Southwest Fisheries Science Center’s aquarium has made infrastructure upgrades to maximize survival.

The SWFSC’s aquarium has converted a controlled temperature culture room to an operational abalone wet lab for settlement purposes. Custom acrylic troughs have been fabricated and installed in the culture room to settle abalone larvae. The trough systems contains sixteen 6-foot troughs that are stacked in pairs to optimize space. Inside the troughs are acrylic tiles to increase surface area for settlement and growth of diatom films. Clear acrylic is used to take maximize light penetration to facilitate improved growth of diatoms for feed and assists with the observation of miniscule animals as they grow.

A second abalone larval settlement system is found in one of the abalone broodstock rooms. This unit is fabricated with 6-foot PVC troughs and uses overhead LED strip lighting to stimulate diatom growth. Unlike the acrylic trough system, this system uses white ceramic tiles to increase surface area for settlement and diatom growth. This system is ideally used for warmer water abalone species that do not need the use of the controlled temperature room to keep the species at optimal temperatures. Though the room is at ambient temperature the supply water temperature can still be manipulated.

During the first week after the abalone hatch, the planktonic abalone larvae are placed in passive transfer buckets to assist in combating bacterial growth. Water and the planktonic abalone are transferred daily from one bucket to another by manipulating the water levels in each bucket via adjustments to the external standpipes. The swimming larvae are transferred at a very slow rate to prevent stress, while screens in the buckets are in place to prevent larvae from being lost in process. Due to the passive nature of transfer the dead larvae and other waste are left behind with each transfer allowing improved water quality.

As the Southwest Fisheries Science Center plans for white abalone stock enhancement, the aquarium has designed and installed a juvenile grow-out assembly that has been located in the Recirculating Aquaculture System.  This assembly contains a track system to hold fitted PVC plates for juveniles to reside on. The system can hold sixteen PVC plates that are designed to allow researchers to pull each plate out individually for sampling, cleaning, and husbandry.

The plates are spaced close enough to hold kelp and algae in place, yet far enough to allow water quality parameters to remain at an acceptable level. The plates are also spaced from the walls and the bottom of the tanks to keep the abalone in place and allow feces and detritus to fall out of the living area for easy cleaning. Custom spray bars and air bubblers improve water mixing in between plates and assist in dispersing waste to the ends of the tanks to facilitate cleaning.

Data have shown that supplementation of diet with red algal species leads to increased growth in abalone species compared to those strictly fed brown algal (e.g. Macrocystis pyrifera) species. The Southwest Fisheries Science Center’s aquarium has started a dulse culture (Palmaria mollis), in the Recirculating Aquaculture System to supplement the diets of the in-house abalone. In hopes of learning optimal algal growth requirements, a variety of light sources (LED, Metal Halide, and Fluorescent) have been used thus far, each providing different growth rates and compositions.

A benefit of the culture location in the RAS system is a co-culture effect with the species housed in the tanks connected. The dulse acts as a biological filter using the ammonia byproducts of fish and abalone feces and converting that to new tissue growth, limiting the use of any additional fertilizers. This leads to a reliable source of nutritious food and higher water quality for abalone though ammonia uptake from the system.