We ensure the sustainability of marine fisheries by providing a time series of catch and biological data of groundfish populations to stock assessors and fisheries managers.

We collect data on the abundance, spatial distribution, sex, length, maturity, weight, and age of groundfish in trawlable shelf and slope habitats along the U.S. West Coast. Our surveys generate a unique blend of data supporting agency priorities to develop Next Generation Stock Assessments. Since 2003, our survey data have informed virtually every groundfish stock assessment and contributed to the successful management of west coast stocks. 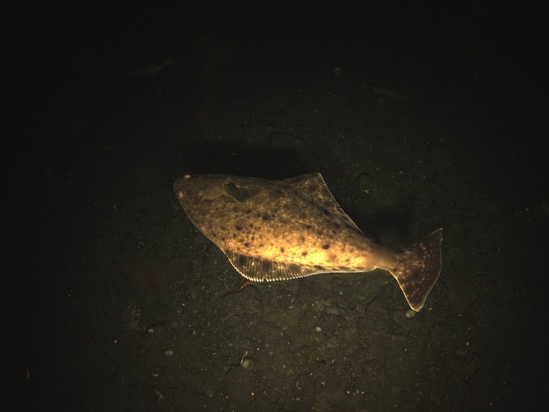 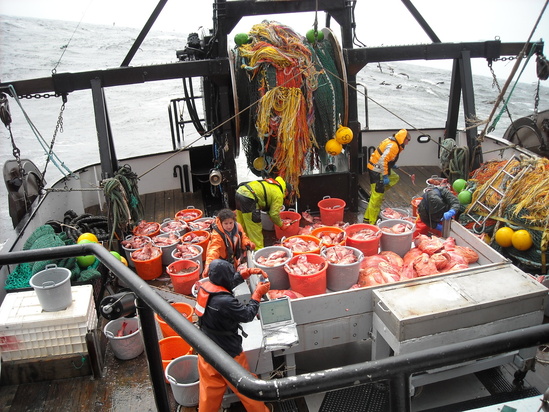 Fishery biologists and deckhands working up a big tow on the F/V Excalibur. All catches
are first divided into baskets by species. Photo: NOAA Fisheries

The Survey occurs from May to October each year. Our coverage extends from Cape Flattery, Washington (U.S. - Canada border) south to the U.S.-Mexico border. We cover this area twice each year using chartered commercial fishing vessels and an Aberdeen-style trawl net. The Survey uses a stratified random sampling design and adheres to strictly standardized trawl gear and rigging specifications. More methods information can be found in the 2017 Trawl Survey Technical Memorandum (PDF, 38 pages.)

We check catch and haul-related information at sea. Vessels are equipped with modern instrumentation to monitor trawl performance and net position, including bottom contact sensors, global positioning systems (GPS), multiple depth sounders, and radar. A variety of oceanographic sensors are attached directly to the trawl net to collect water column profiles of temperature, salinity, turbidity, fluorescence, light, and dissolved oxygen for each haul at depth.

We encounter about 90 commercially fished stocks, including the following species categories:

We sort, measure and weigh all captured fish and invertebrate species. Doing so ensures that data are accurate and current annually.

We collect the following biological samples on a subset of species for further analysis: 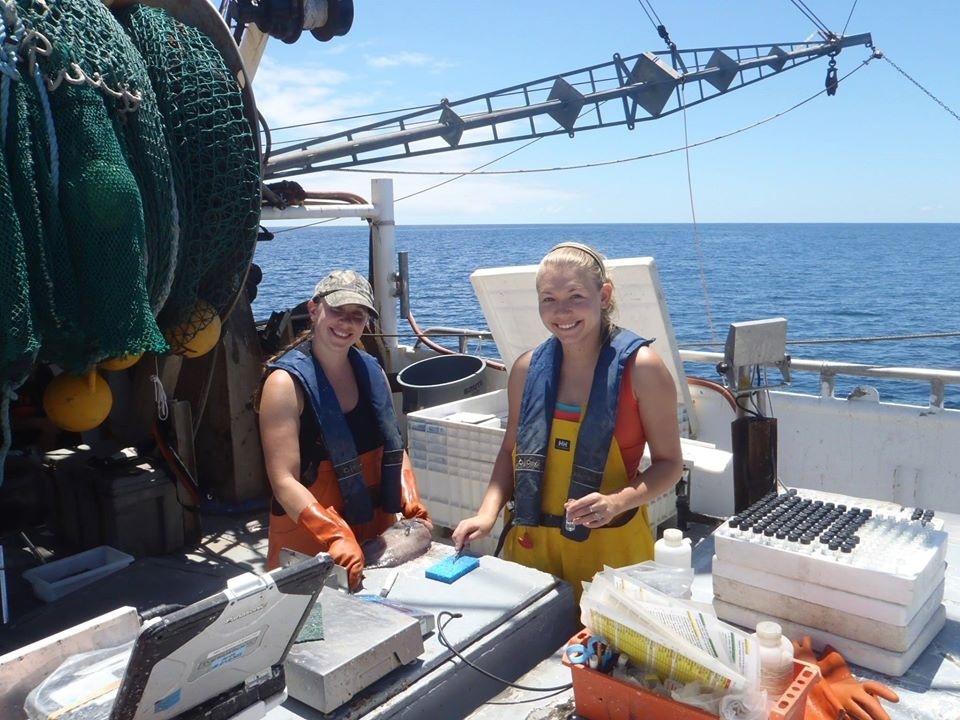 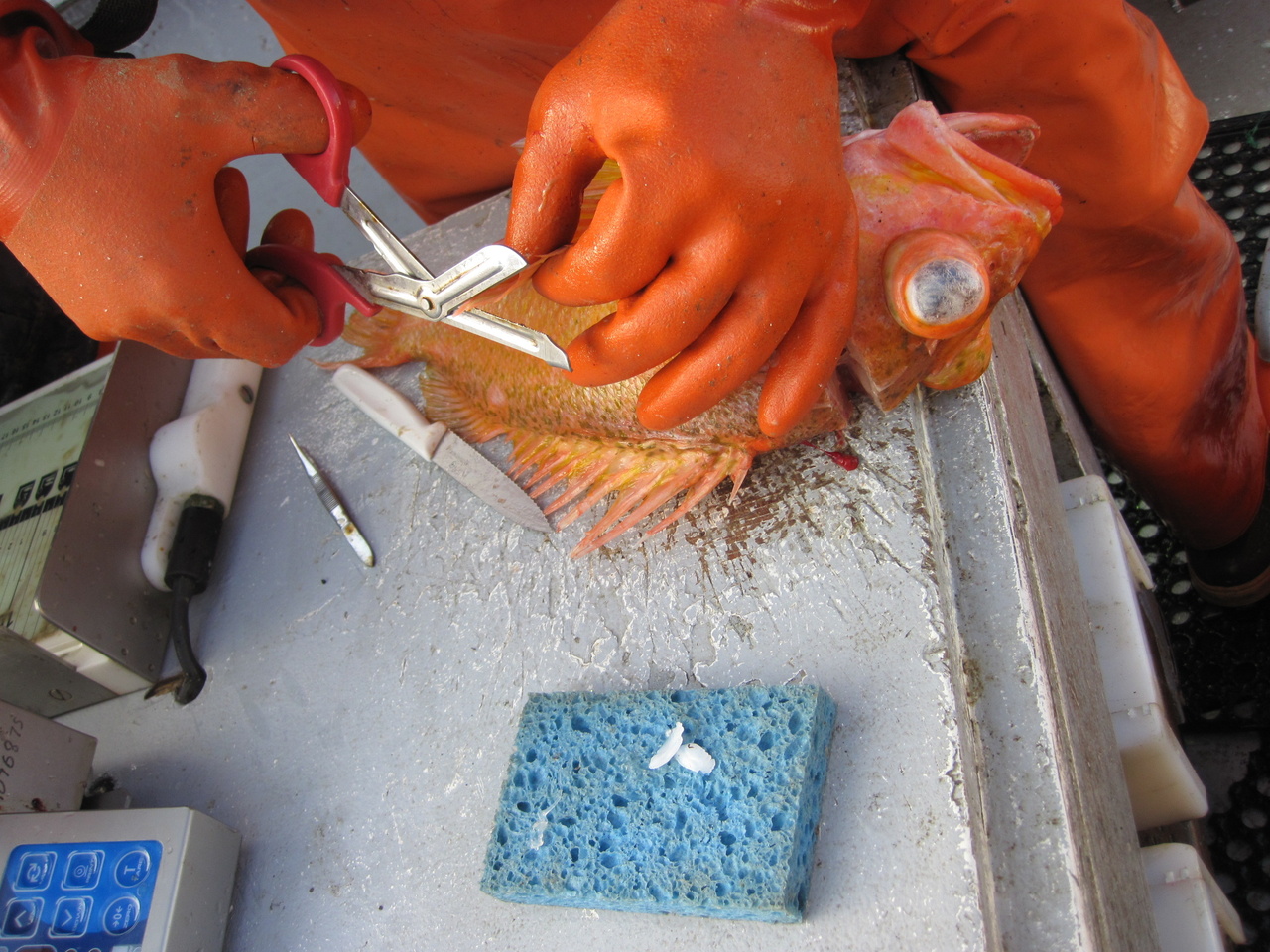 Biological samples (fin clip and otoliths) being collected from a greenspotted rockfish.
Otoliths, or ear bones, are pictured on the sponge. Photo: NOAA Fisheries 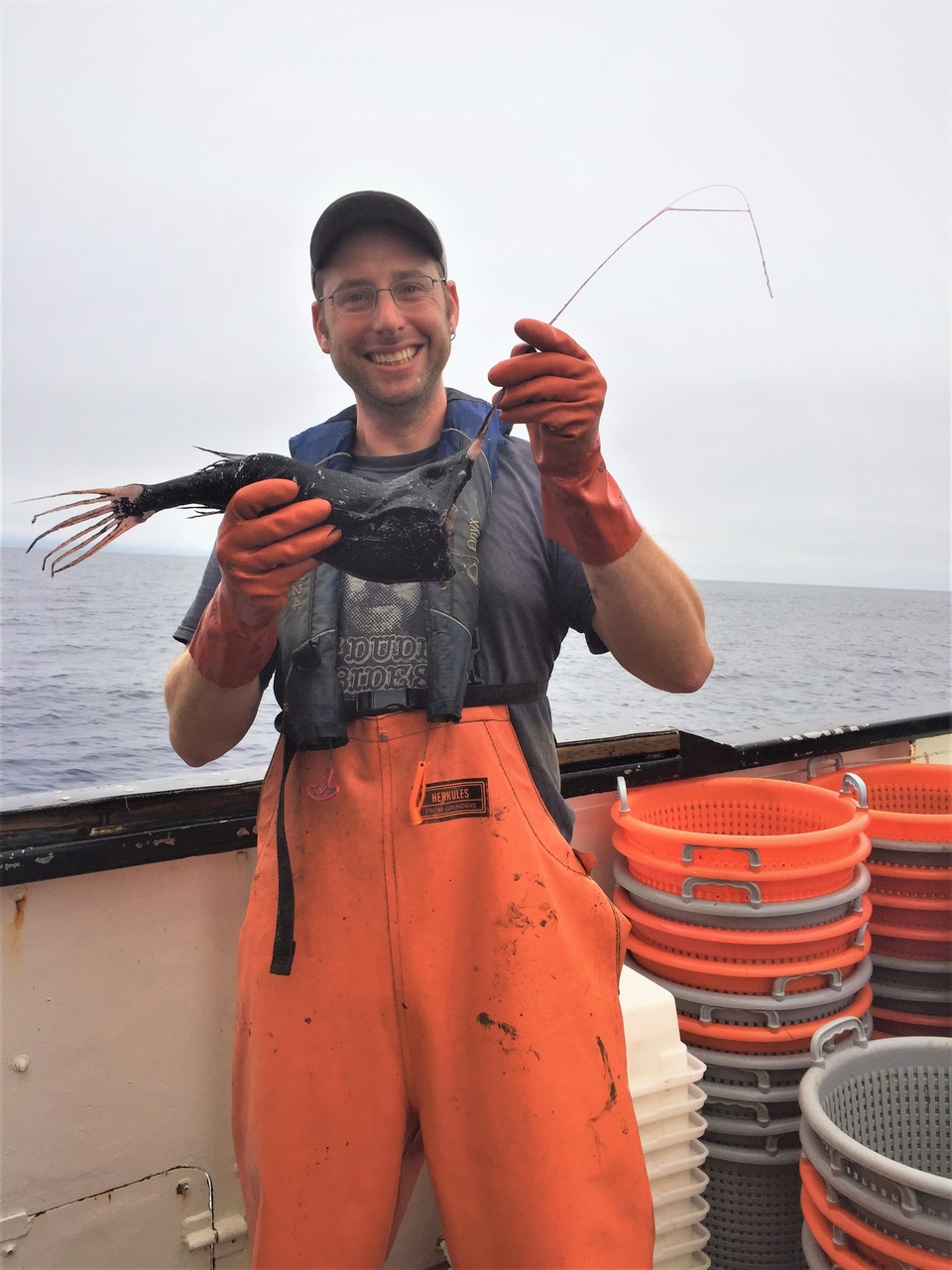 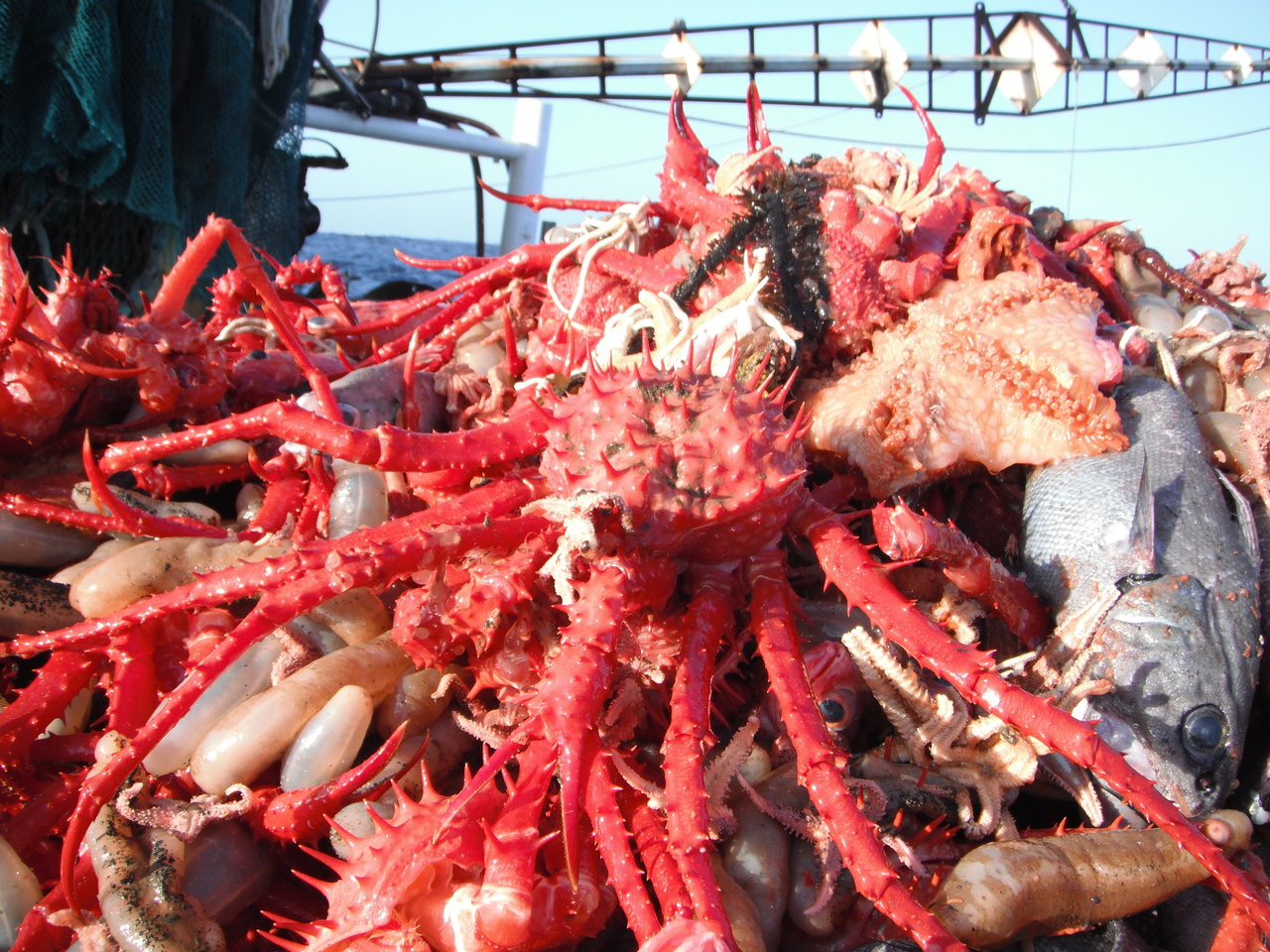 Volunteering for the Survey

Each year volunteers from academic institutions and other State and Federal agencies assist with biological sampling and research operations at sea. Learn more about volunteering with NOAA biologists on the survey.

In addition to the Survey's primary objective of collecting fishery-independent data, we also conduct a variety of supporting research in the region.

Our fisheries scientists collaborate with a wide range of research institutions, universities, and state and federal agencies to better understand groundfishes' life-history. We have conducted many age-and-growth, diet, maturity, physiology, and distribution studies on rockfishes, sharks, rays, and other deep-sea species. We are interested in tracking how these life-histories change over space and time, particularly in response to long and short-term oceanographic trends, seafloor habitat types, and fishing intensity. As of 2020, data from the Survey has contributed to more than 20 published groundfish life-history studies.

We also research the prey composition, and foraging groundfishes' habits to identify their role in the food web. Scientists use this information in a wide range of applications, from life history studies and trophic cascades to integrated ecosystem assessments. Diet information is particularly useful for improving our understanding of how anomalous events, including El Niño, warm blobs, and seasonal hypoxia, can influence food webs and fisheries. Learn more about our West Coast Groundfish Diet Research. 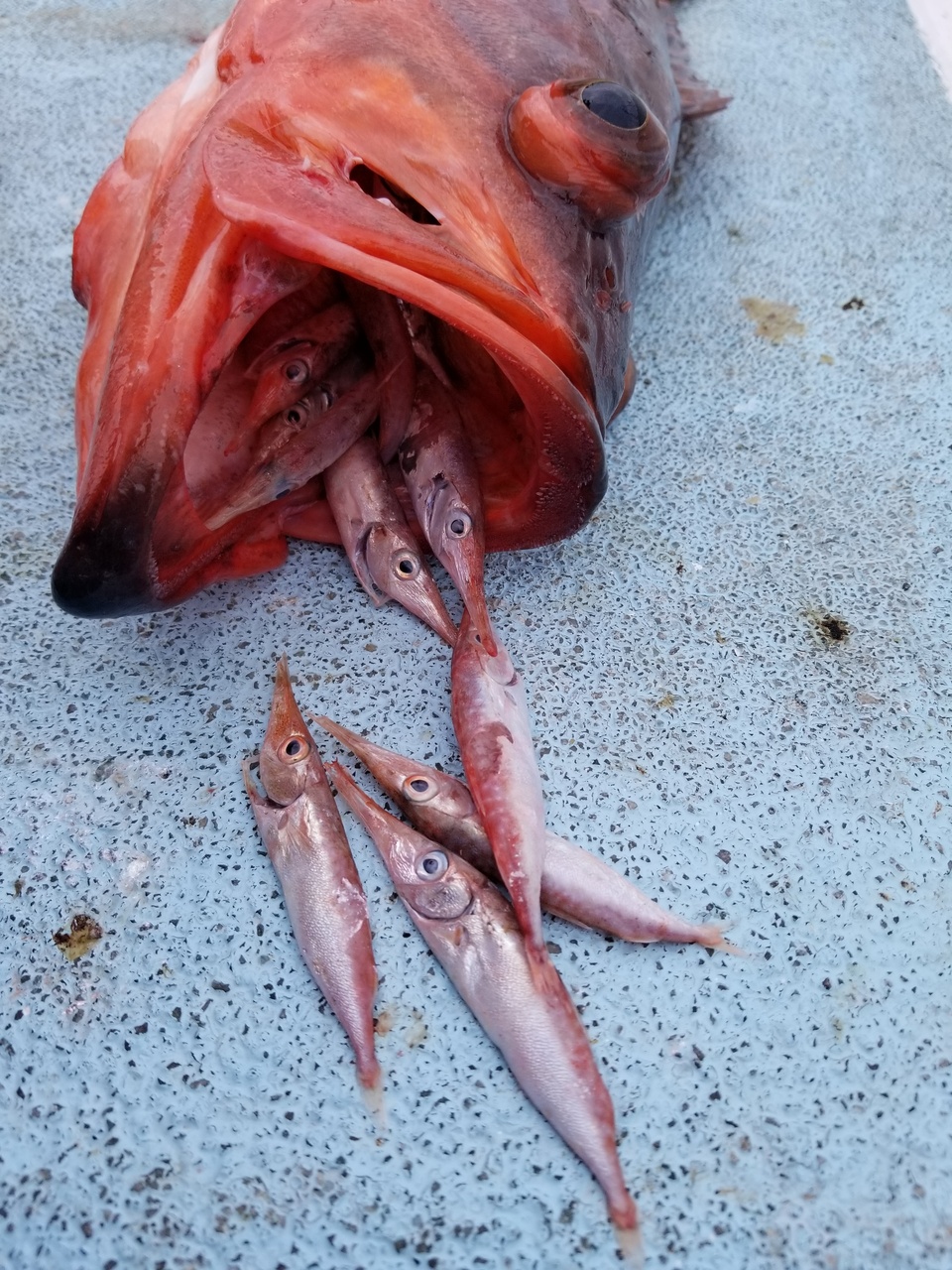 Genetics and Discovery of New Species

We collect genetic samples from fish and invertebrates for ongoing research on deep-sea coral taxonomy, rockfish speciation, and coastwide population structure. Genetic analysis lets us distinguish new species from existing ones, and helps decide what species we should protect under the Endangered Species Act (ESA). The use of genetics has enabled us to delist from the ESA previously overfished species (i.e., canary rockfish). Genetic samples support many research collaborations at the Northwest Fisheries Science Center and elsewhere.

We have improved our understanding of ecosystem-level dynamics within the California Current Ecosystem because of the Survey's long time series and our collection of oceanographic and habitat data. In 2019, we teamed up with ecosystem scientists, oceanographers, and economists to create the California Current Integrated Ecosystem Assessment (CCIEA). This collaboration allows us to track climate patterns, quantify fishery response, and project future conditions. 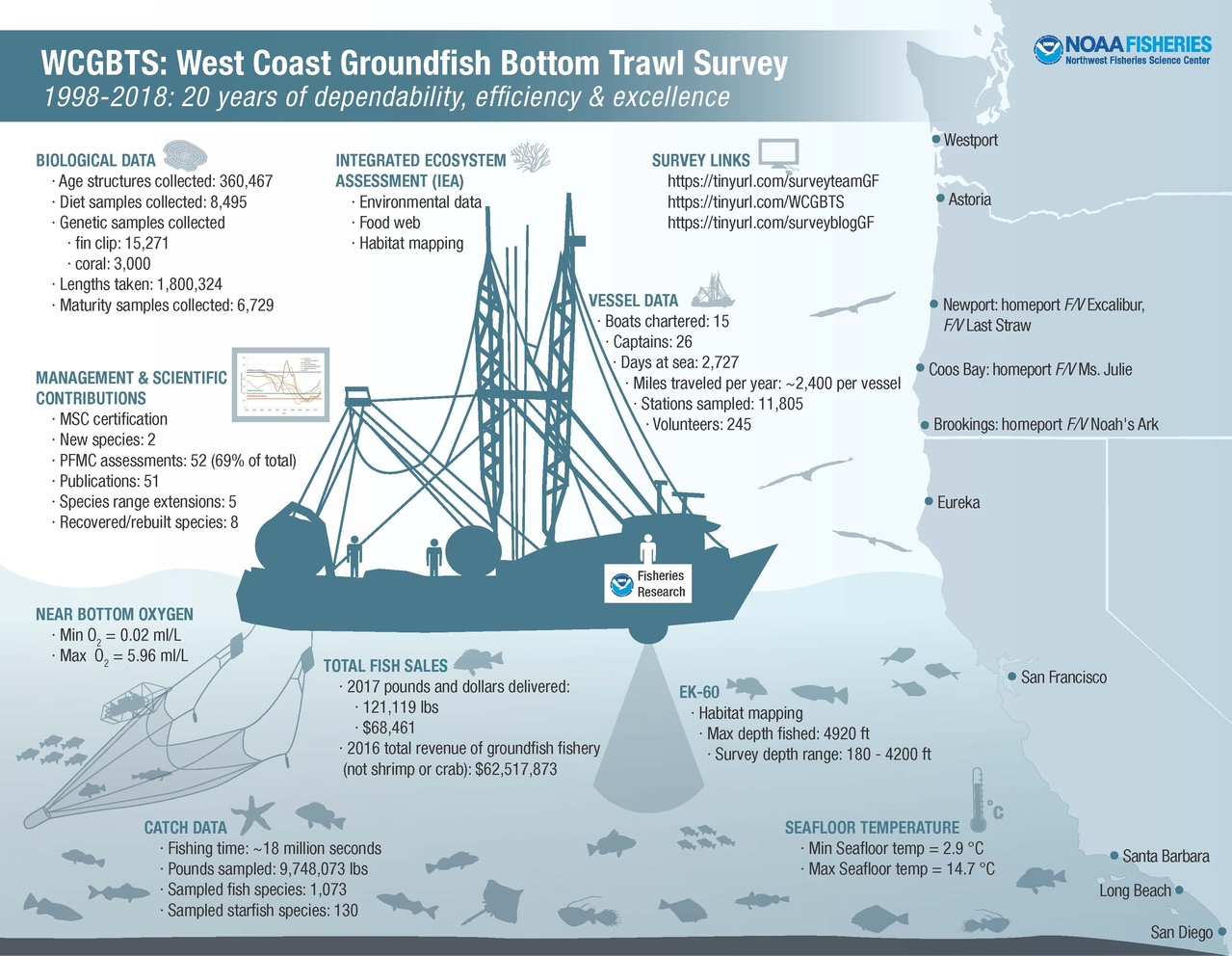