International Collaboration to Monitor and Respond to Tagged Gray Whale

NOAA Fisheries and Canadian partners working together, sharing information and expertise to respond to gray whale. 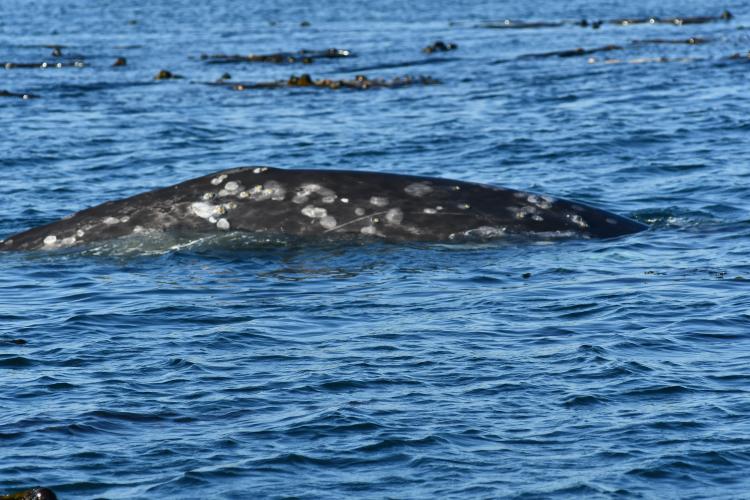 Using locations from the satellite tag, researchers with the NOAA Alaska Fisheries Science Center’s Marine Mammal Laboratory and our Canadian colleagues from the Department of Fisheries and Oceans (DFO) Canada attempted to track and locate the tagged gray whale during the summer. The last re-sighting of this whale in the United States occurred on June 15 near the location this individual was first tagged in 2020. Photographs and unmanned aerial system (UAS) footage were obtained and showed that the tag was still attached. The lesions around the tagging site appeared to have improved relative to when first documented in March 2021. Overall, the whale appeared to be in good condition throughout the period it was monitored based on standard criteria developed to assess gray whale body condition from photographs (Bradford et al., 2012). The whale also exhibited typical foraging behavior and movements for the season. NOAA researchers reported no behavioral abnormalities, and video footage showed the animal actively feeding on the bottom with no obvious signs of distress. Notably, prior to being observed east of Neah Bay in the Strait of Juan de Fuca, the individual had travelled approximately 45 kilometers between foraging sites along the outer coast of Washington in a single day. 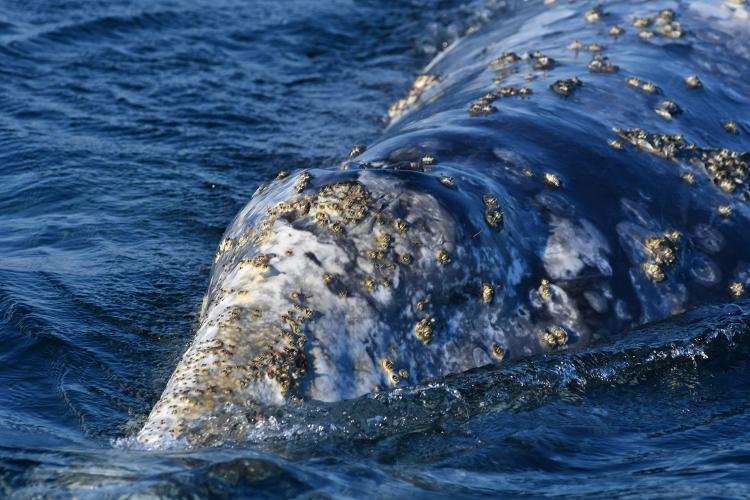 Soon after the sighting on June 15 in Washington, the whale moved into Canadian waters where it was sighted on five occasions off Vancouver Island near Tofino (July 12, July 28, July 30, August 4, and August 6). These sightings were reported to Canada DFO and shared with NOAA. In the words of the observers from the 12 July sighting: “Behavior was exactly what we'd expect for this whale: 4-5 breaths, fluking, and a 2-3 knot travel speed, and 3-4 minute dives. They were heading down the coast.” They also noted the whale was "actively feeding". 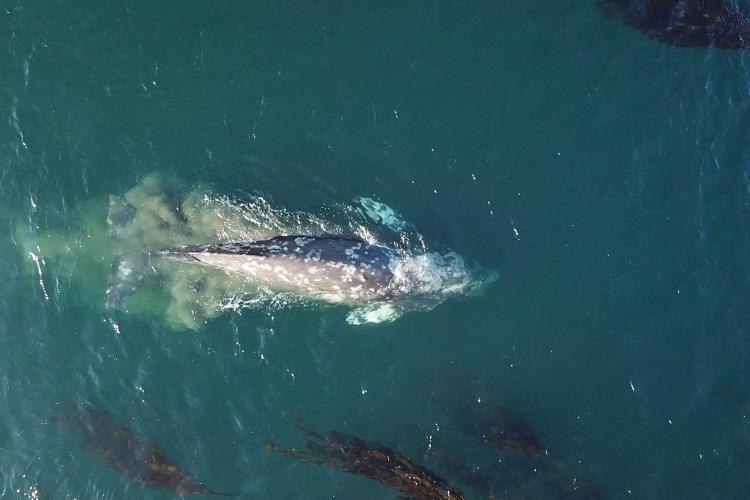 The tag stopped transmitting on September 10 with a last known location off the west coast of Vancouver Island. Tag transmission duration was 366 days and represents one of the longest tag deployments in a gray whale to date (max 383 days). At present, researchers do not know why the tag stopped transmitting. New information about the status of this individual may be possible in the future when new sightings of this individual are documented during on-going photo-recapture efforts along the Washington and Vancouver Island coastlines by the Alaska Fisheries Science Center and our Canadian colleagues. 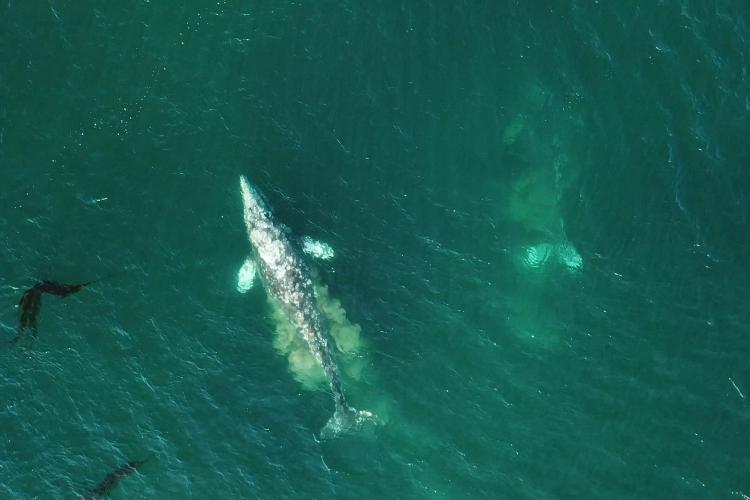 In September 2020, researchers with NOAA Fisheries satellite tagged three Pacific Coast Feeding Group gray whales off the coast of Washington. This was part of a pilot study to better understand the late season habitat use and movements of this unique group of whales.

Two of the whales moved off shore shortly after tagging. Within a month their satellite tags stopped transmitting. This is not unusual as there is often quite a bit of variability in satellite tag transmission durations (e.g., transmission times can range from just a few days to years).

The other whale has remained close to shore since the winter. This has afforded us a good opportunity to closely monitor its movements, condition, and behavior.

We photographed the whale on September 4 prior to tagging. At the time, we determined that the whale was in good condition and was a good candidate for tagging. We only undertake tagging when we are confident the risk to the animal is low.

On September 8, we tagged the whale with an implantable satellite tag. The whale was in good condition at the time of tagging.

We monitored the whale over the next several months based on satellite locations and collected photographs on September 25, October 4, and December 9. No abnormalities around the tagging site were observed in any of these photographs.

The satellite tagging data showed that the whale made multiple trips from Washington to British Columbia. In all observations pre- and post- tagging the whale was behaving, feeding, and swimming normally.

On March 16, 2021—189 days after deployment of the tag—a contractor for NOAA Fisheries photographed the whale in Barkley Sound, British Columbia. They reported a lesion around the tagging site and two lesions on the opposite side of the animal. The animal was with other whales and appeared to be in good condition and behaving normally.

The photographs were examined by a veterinarian from the University of California, Davis, experienced in evaluating tagging sites of whales from photographs.

We also reached out to our Canadian colleagues to help us gather more information on the whale, evaluate the animal’s condition, and monitor the whale.

Fisheries and Oceans Canada and Vancouver Aquarium/Ocean Wise conducted a vessel and drone survey on March 28 to collect additional photographs. On March 31 and April 1 the team administered antibiotics to the whale and collected a breath sample to further evaluate the whale's condition.

After receiving their reports and the veterinarian's report, we convened a panel of U.S. and Canadian whale experts and veterinarians on March 31. The panel reviewed additional photographs and developed a response plan.

The consensus of the panel was that the lesion around the tag site was within the range of reaction that would be expected as the body extruded the tag. However, it was unusual compared to other records of whales tagged with similar tags.

The panel was concerned about lesions on the opposite side of the whale but could not determine if these lesions were related to the tagging site. The panel agreed that the lesions did not pose an imminent danger to the animal’s health.

They recommended continued monitoring. We are hopeful that once this satellite tag is extruded, the tissue around the tagging site will heal. But we will continue to monitor the whale’s condition closely.

Why did you conduct this satellite tagging study?

Under the Marine Mammal Protection Act and the Endangered Species Act, NOAA Fisheries is required to monitor and collect scientific data and information to support the management, recovery, and protection of whale and other marine mammal populations.

Satellite tags help us collect continuous, long-term data on whale migrations, behavior, and habitat use. This is especially important for species that inhabit remote or inhospitable areas where human access is limited.

A few ways satellite data helps us to better protect marine mammals are by:

The focus of this tagging study was to learn more about a small group of about 250 gray whales that comprise the Pacific Coast Feeding Group. Unlike most gray whales, they do not make the long migration along the west coast of North America from wintering and calving areas off the coast of Baja California, Mexico to summer feeding grounds in the northern Bering and Chukchi seas. They usually remain in feeding areas off the Pacific Northwest and British Columbia, Canada from June through October.

What is the population status of gray whales?

The Pacific Coast Feeding Group is part of the Eastern North Pacific gray whale population. This population has fully recovered from the whaling era and was taken off the U.S. endangered species list in 1994. It now numbers around 20,000. 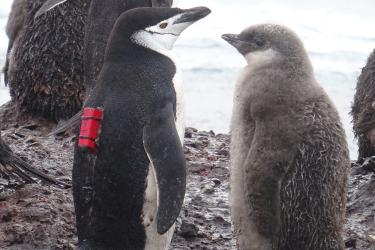 Permits and authorizations allow people and entities—whether they are researchers, commercial fishermen, a public display facility, or an energy corporation—to conduct their activities legally unde