What research is teaching us about beluga whale behavior and how humans may be impacting it. 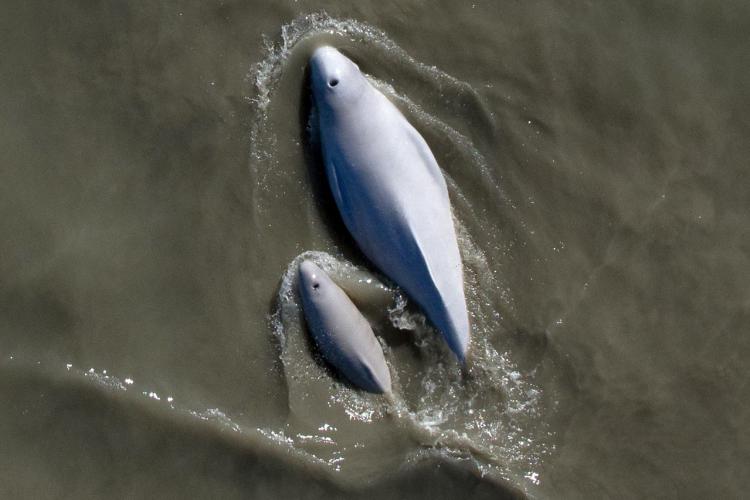 1) Belugas Can Travel Thousands of Miles from Their Arctic Habitats

Beluga whales can travel thousands of miles from the icy waters where we expect to see them. While we expect to find them in arctic and subarctic waters, they’ve been found as far south as the waters off the coast of California and New Jersey! While we’re still trying to understand these behaviors, we now have non-invasive ways of doing genetic testing to determine which population these whales are from and to monitor whether or not they will need assistance from the whale stranding network.

2) Belugas Get Pregnant Later in Life

Genetic aging studies on a small number of Cook Inlet beluga whales noted that very few under the age of 19 were pregnant. While more studies are needed to confirm this essential information, it gives us a glimpse into why the Cook Inlet population may require a long time to recover.

Beluga whales hunt in shallow waters where they can cooperatively work to corral their prey. This social hunting behavior is also observed in other marine relatives, such as dolphins. It puts beluga whales at high risk for injury and death if they become trapped on the mudflats as the tide goes out. The tidal range in Cook Inlet is one of the largest in the world at about 32 feet and mass strandings of belugas are not uncommon. However, most if not all usually survive until the tide comes back in.

4) We Have a Full Genome Sequence for Beluga Whales

Beluga whales are one of the few species of whale for which we have a full genome sequence and multiple extensive partial sequences. They allow us to do extensive research on them and their genetics using only minimally and noninvasive sampling. In the past, this has included examining genetic mixing between populations as an indicator of social contact, such as between the Yakutat Bay and Cook Inlet populations.

Beluga whales are sometimes called the “canaries of the sea” because of their varied and frequent vocalizations. Because of the high pitch of some of the calls they make, these sounds travel short distances. This is unlike other whale songs which are usually produced at lower pitches, in deeper water, and travel farther distances. This inability to communicate over long distances in shallow waters may be contributing to belugas avoiding waters with large amounts of noise pollution that could interfere with their calls. Noise pollution produced by human activity could be a reason that some of their historic range is no longer frequented as often.

In 2015, NOAA Fisheries launched the Species in the Spotlight initiative to provide immediate, targeted efforts to halt declines and stabilize…