10 Years of Science and Stewardship in Pacific Marine National Monuments

Please join us in celebrating the 10th anniversary of the establishment of the Marianas Trench, Pacific Remote Islands, and Rose Atoll Marine National Monuments. 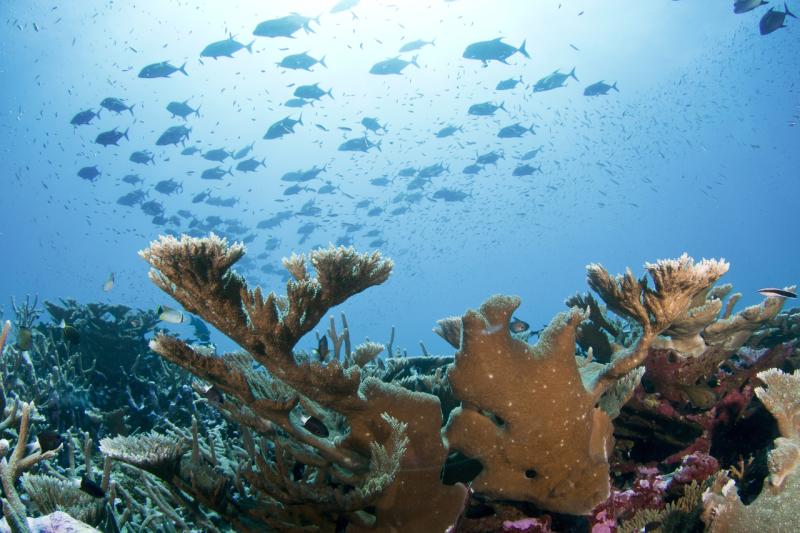 The Marianas Trench, Pacific Remote Islands, and Rose Atoll Marine National Monuments were established ten years ago. These spectacular and remote marine ecosystems continue to inspire us to explore, learn, and share more about the diverse species and habitats that flourish in the Pacific Ocean.

NOAA Fisheries’ Pacific Islands region, NOAA's Office of National Marine Sanctuaries, the U.S. Fish and Wildlife Service, the governments of the Commonwealth of the Northern Mariana Islands (CNMI) and American Samoa, and our many partners have been busy since these Monuments were designated on January 6, 2009.

These are just a few of the many projects and activities implemented in the past decade to help us protect and learn about the marine ecosystems in these marine national monuments. We hope you will follow along during the next 10 years as we continue our research and stewardship activities.

Learn more about the Marine National Monuments in the Pacific 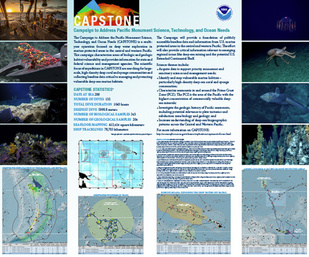 CAPSTONE summary graphic. Created by NOAA Office of Oceanic and Exploration and Research.

The NOAA ship Okeanos Explorer conducted a 3-year exploration expedition to the Monuments and marine protected areas in the archipelagos of Hawaiʻi, the Marianas, Pacific Remote Islands, American Samoa, and Phoenix Islands. The project mapped more than 100,000 square kilometers of seafloor, collected hundreds of terabytes of data, and observed or discovered new seamounts and hundreds of new species—an invaluable accomplishment that will assist in characterizing these ecosystems. 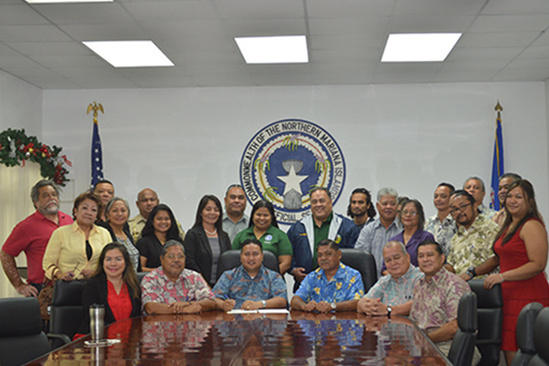 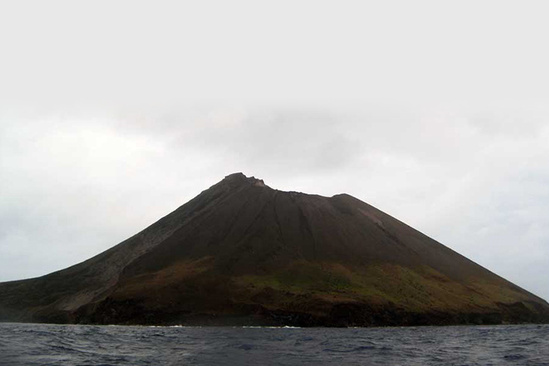 In December 2016, the United States conveyed to the CNMI government the submerged lands and their associated mineral rights from 0 – 3 nm around the islands of Farallon de Pajaros (Uracas), Maug, and Asuncion. The coral ecosystems that ring the islands contain a wide diversity of stony corals in the Western Pacific. These resources continue to be protected as biological easements and part of the Marianas Trench Marine National Monument. The U.S. Fish and Wildlife Service, NOAA, and the CNMI government also completed a Memorandum of Agreement for managing the submerged lands.

Monitoring and Researching Fisheries for Sustainability 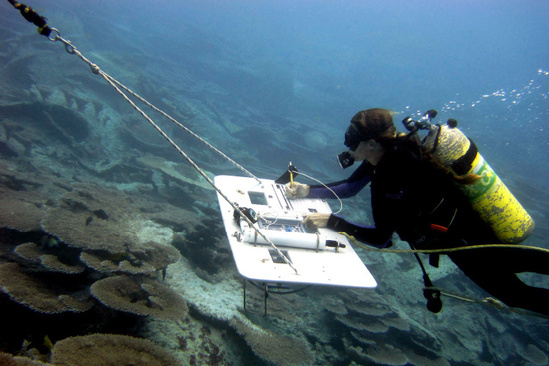 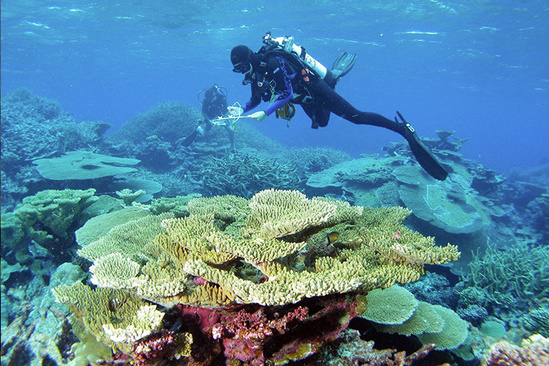 A team of scientists and partners with the Resource Assessment Management Program of the NOAA Pacific Islands Fisheries Science Center have been monitoring the condition and trends of species and their habitats in the Marianas, Pacific Remote Islands, and Rose Atoll Marine National Monuments since 2000. 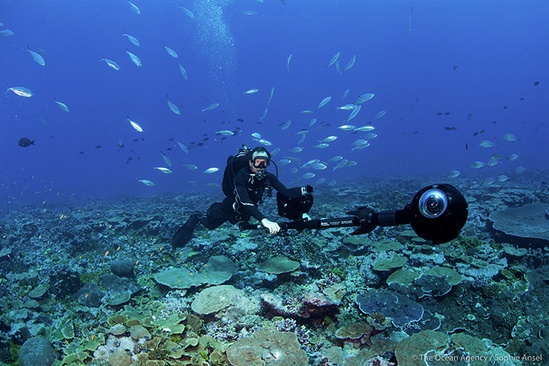 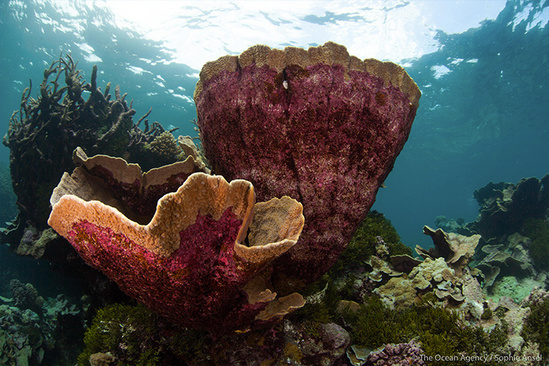 Palmyra Atoll National Wildlife Refuge in the Pacific Remote Islands Marine National Monument has been named a “Hope Spot” by Mission Blue. Mission Blue is a non-profit coalition dedicated to creating a global network of marine protected areas that give the world’s oceans respite from human impacts. Thanks to ongoing management—like the eradication of invasive rats and removal of shipwrecks that were damaging the coral reef—the atoll continues to thrive. The Palmyra Atoll is now available for 3-D viewing at Google Street View Oceans Portal and the 360-degree video on YouTube. Virtual filming was made possible through a NOAA grant awarded to Underwater Earth and support from the U.S Fish and Wildlife Service and The Nature Conservancy. 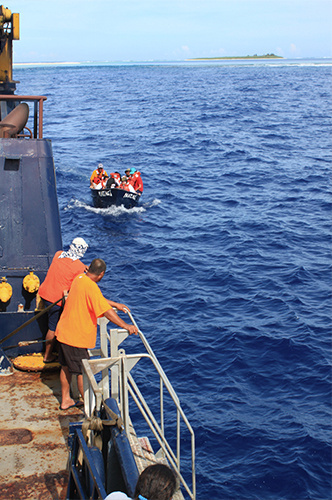 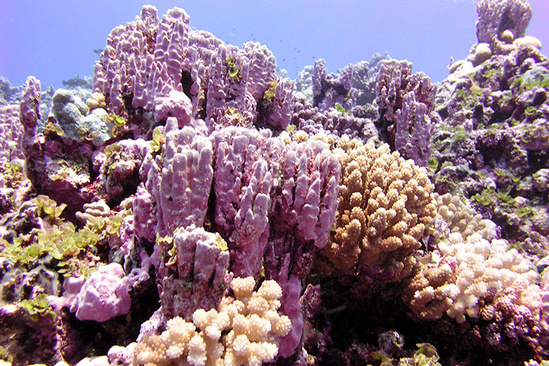 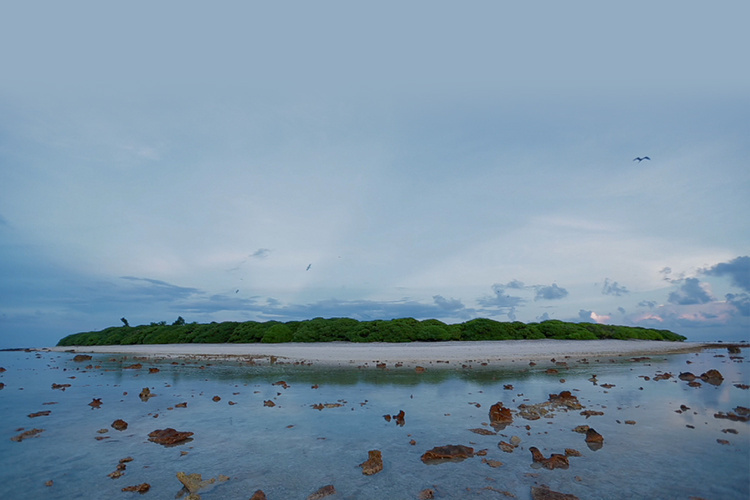 Local leaders in American Samoa, scientists, and partners visited Rose Atoll Marine National Monument and Rose Atoll National Wildlife Refuge to develop education materials based on the cultural tradition and oral history of the local communities. They produced a documentary and a bilingual brochure with lesson plans on coral reef ecosystems and geology, climate change, and water quality monitoring. 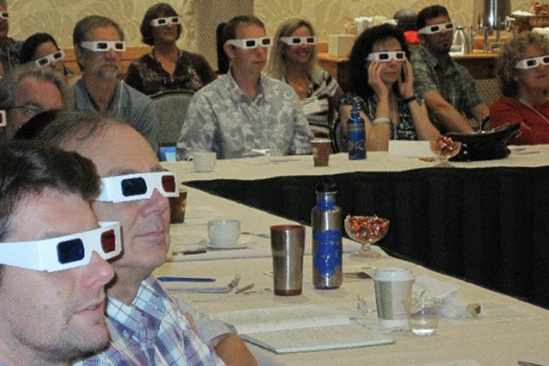 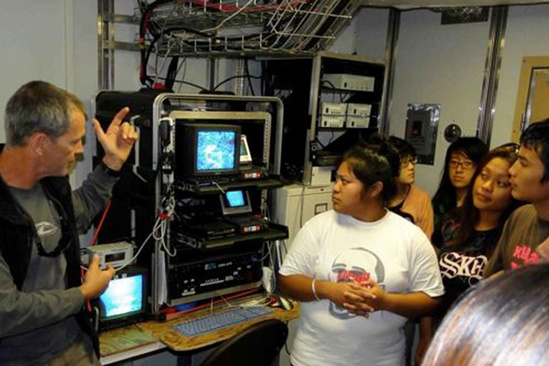 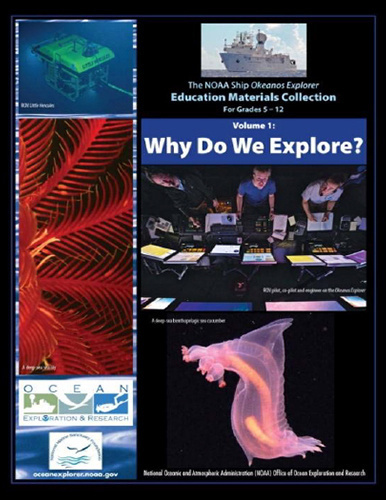 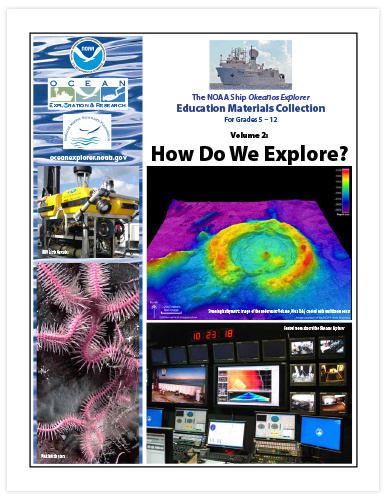 NOAA Okeanos Explorer books How and Why Do We Explore available online with 100’s of lesson plans for educators.

In April 2015, 80 educators in the CNMI and Guam—responsible for teaching nearly 6,800 students in the public school systems—underwent an 8-hour professional development course and curriculum. They learned how to teach “Why Do We Explore the Marianas Trench Marine National Monument” for grades 5–12. The course was presented by the NOAA Fisheries Marine National Monuments Program and Office of Ocean Exploration and Research. Fifty educators in Pago Pago, American Samoa, underwent the same training in August 2016. Why Do We Explore? volume 1 and How Do We Explore? volume 2 from the NOAA Ship Okeanos Explorer Education Materials Collection are used to teach ocean exploration. They provide standards-based, hands-on activities and online resources that guide classroom teaching about ocean exploration, climate change, ocean energy, ocean health, human health, and technological innovations. 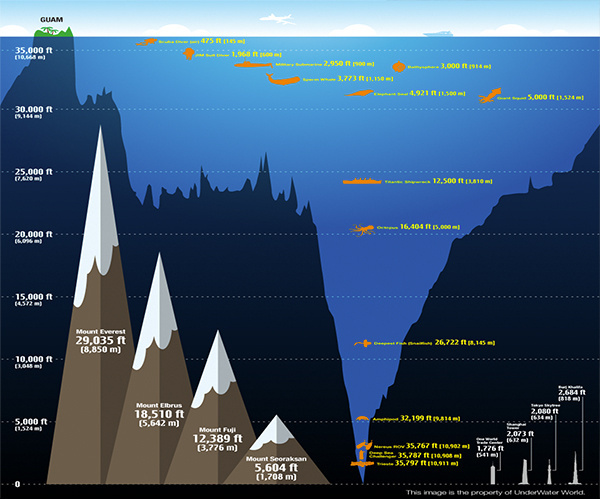 The depth of the Mariana Trench compared to the depths of other mountains, marine mammals, and expeditions around the world. Image courtesy of Guam UnderWater World.

NOAA Fisheries awarded a grant to Open Boat Films, LLC. to develop the film Our Deepest Waters: Exploring the Remote Reaches of the Pacific Marine National Monuments. The film shows the research and management activities conducted in the monuments, as well as the unique natural marine resources in these remote areas. We also awarded a grant to Open Boat Films to produce a sing-along music video, The Marvelous Music Report, which won national and international awards at film festivals. 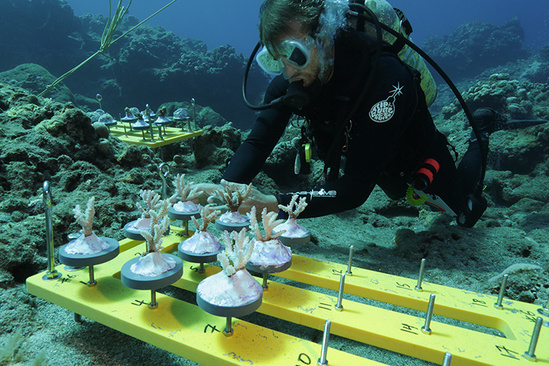 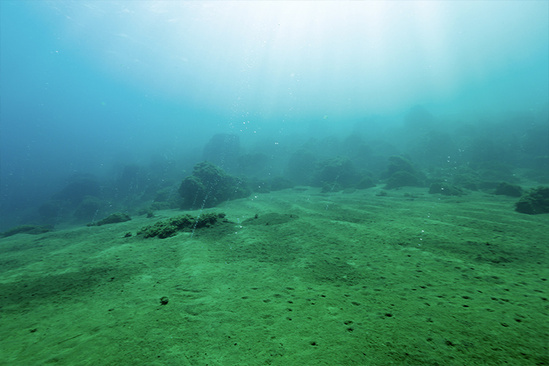 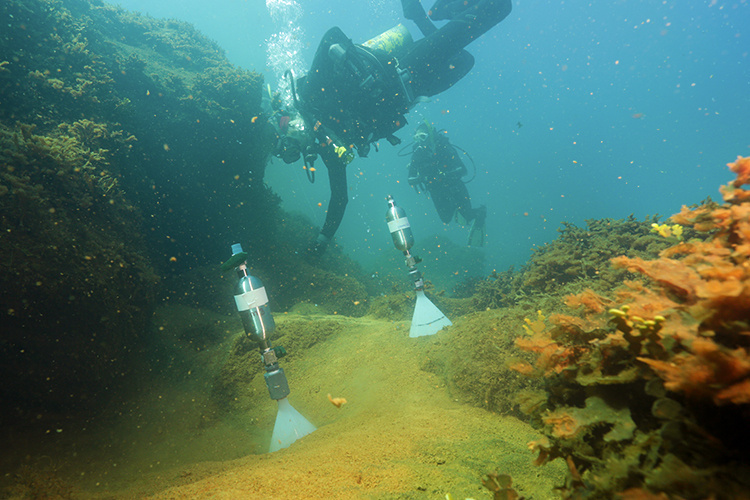 Top left: Corals being placed at locations in Maug cauldron to measure the effects of elevated sea temperatures and ocean acidification. Top right: Carbon dioxide bubbling from the seafloor from the hydrothermal vents below. Bottom: Placing devices on the seafloor to measure the carbon dioxide percolating up from the hydrothermal for climate change and ocean acidification research. Photos: NOAA/Open Boat Films.

NOAA and the U.S. Fish and Wildlife Service also funded a documentary produced by Open Boat Films LLC and partnering scientists called Maug’s Caldera: A Natural Laboratory, which was broadcast on Changing Seas TV. The film captures the scientists conducting research in the natural hydrothermal vent conditions at Maug cauldron to learn how organisms survive and adapt. 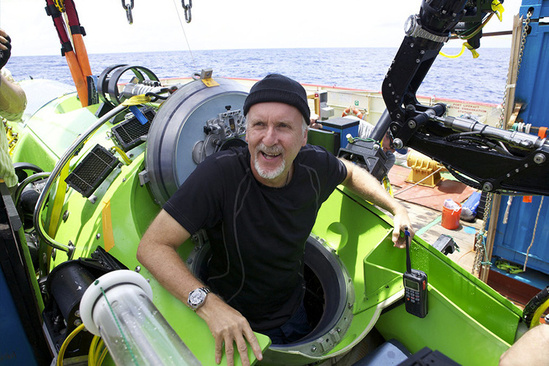 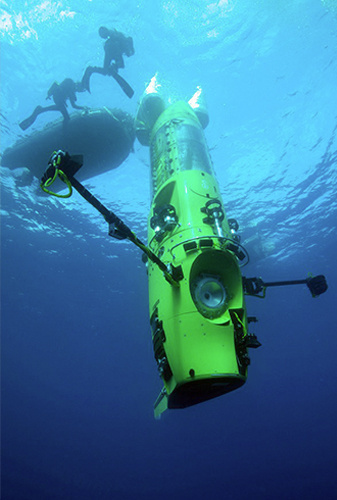 Left: Film producer James Cameron getting into his specially designed submarine to dive to the deepest place on Earth in The Deepsea Challenge Expedition, in the Mariana Trench. Right: The submersible, Deepsea Challenger, took James Cameron and his cameras down to 35,787 feet. Photos © National Geographic/Mark Thiessen.

James Cameron (producer of Titanic and Avatar) conducted the DEEPSEA CHALLENGE Expedition, as he dove into the Mariana Trench to reach the deepest point on Earth. Learn more about the Mariana Trench expedition and see the trailer for a film about the dive. National Geographic, NOAA, U.S. Fish and Wildlife Service, University of Hawaiʻi, University of Guam, and partners supported the expedition. 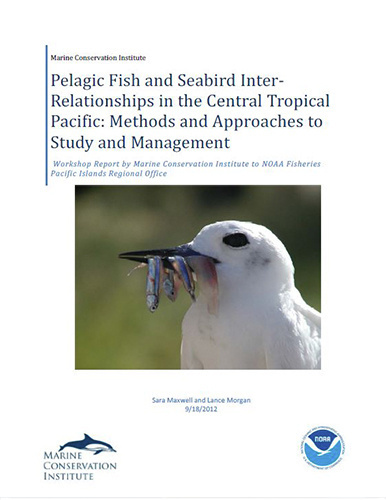 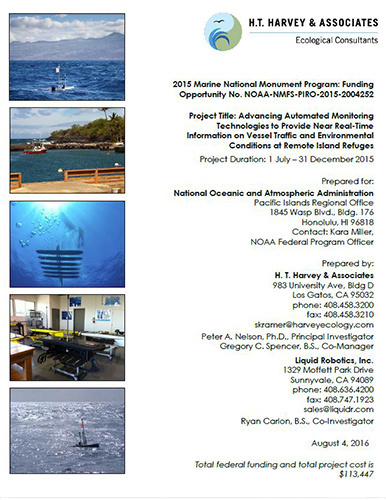 Left: Pelagic fish and seabird inter-relationships and near real-time monitoring of vessel traffic and environmental conditions are two of the dozens of grants and contracts awarded to gather information needed to guide resource management decisions. Right: Cover page of pelagic fish and seabird interactions report & cover page of wave-glicer report.

Additionally, preparation for the Pacific Remote Islands Marine National Monuments draft management plan will begin in 2019. We will start with the establishment and meeting of a “community group” which will contribute ideas on new and emerging issues to the agencies, supporting the proper stewardship of the monument resources.