Collisions with boats as small as 30 feet in length can be lethal to large whales, especially calves, and dangerous for boat passengers. Reduce your speed to keep everyone safe. 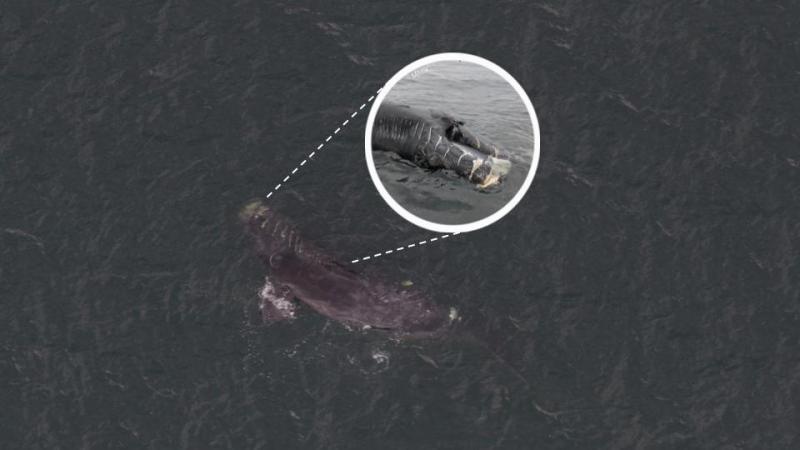 North Atlantic right whales are in crisis and approaching extinction with fewer than 350 remaining. These whales migrate, breed, and feed in coastal waters frequented by humans for boating, fishing, and shipping. We know that collisions with boats of all sizes, not just large ocean-going ships, are one of the primary causes of right whale injuries and deaths.

By regulation, most vessels 65 feet or greater in length are required to maintain speeds of 10 knots or less in certain areas and months of the year. However, lethal collisions have involved boats of many sizes, even smaller vessels. Since 1999, we have confirmed eight events in which North Atlantic right whales were struck by boats less than 65 feet long. These strikes occurred across all seasons and were observed in waters off Massachusetts, New Jersey, Georgia, and Florida. In seven of these incidents, the vessel operators did not see the whale prior to the strike. In another, the boat passengers sighted the whale too late to avoid the collision.

Despite their enormous size, North Atlantic right whales can be surprisingly difficult to spot from a boat due to their dark color and lack of a dorsal fin. This is especially true in poor weather or low light conditions. Mother-calf pairs are especially vulnerable. Among these incidents involving vessels under 65 feet, one calf was found dead with evidence of at least two separate vessel collisions in 2020. Another vessel strike in 2021 seriously injured a first time mother and killed her calf.

Starting in 2010, the already endangered North Atlantic right whale population began to rapidly decline, a trend that continues today. In 2017, NOAA declared an Unusual Mortality Event for the species following a cluster of mortalities. The UME is ongoing, and includes several cases of dead or seriously injured whales attributed to vessel strikes.

Female right whales and their calves are critical to population recovery for the species. However, they are at heightened risk for vessel strikes. They spend nearly all their time at or near the surface of the water but are not always easily visible. And disturbance to mother-calf pairs could affect behaviors, like nursing, that are critical to the calves’ health and survival.

Right whale calving season normally begins in mid-November and runs through mid-April in nearshore waters along the coast between North Carolina and Florida. It is especially important during that time to slow down, be on the lookout, and give these whales plenty of space.

We are dedicated to conserving and recovering these endangered whales, but we need your help. All boaters from Maine to Florida: you can help protect the endangered North Atlantic right whale. Slow to 10 knots or less in areas where right whales are likely present. Going slower allows you to keep a close eye out for right whales and other protected species, and reduces the chances of collisions being fatal.

Where and When to Slow Down

In advance of your trip, check the NOAA Right Whale Sightings Advisory System for active right whale speed reduction zones and recent whale sightings near you. You can also download the free Whale Alert app, which will automatically notify you when you enter one of these areas. Remember, right whales may be present even if no detections are indicated. Use sightings information as a guide, but always slowdown in Seasonal Management Areas, Dynamic Management Areas, and Slow Zones.

Whatever the size of your vessel, slowing down can make a huge difference in helping to save these endangered whales. Just remember, go slow—whales below.

Last updated by Office of Communications on May 10, 2022