In celebration of our 150th anniversary, we are highlighting people who helped build the foundation of fisheries and marine science. Meet Ambrose Jearld Jr., scientist and advocate for diversity and inclusion within NOAA and the scientific community. 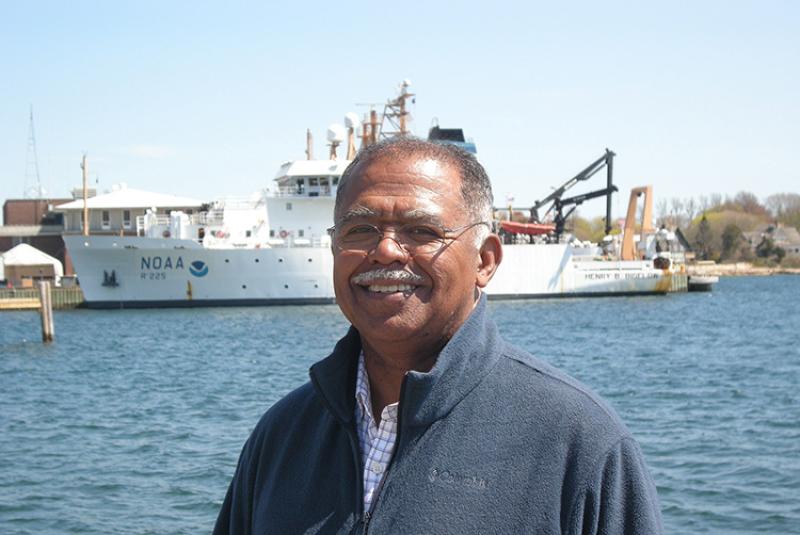 Ambrose Jearld, Jr. has spent his life around animals and water—both freshwater and seawater. He was born in 1944 into a Navy family in Annapolis, Maryland, and grew up on the family farm in Orrum, North Carolina. He attended elementary school there, but returned to Annapolis in sixth grade and graduated from Wiley H. Bates High School in 1961. He credits his high school biology teacher and the Boy Scouts for encouraging his interests in science.

He graduated from Maryland State College, now the University of Maryland Eastern Shore, with a degree in biology and a minor in chemistry in 1965. He was just one course away from a double major when he graduated. “My family wanted me to go into teaching, but I wanted to do research and instead went straight into science,” he recalled recently. With a brother and sister heading to college soon, he took a few years off after college to work at “a good-paying job” as a chemist at Publicker Industries Inc. in Philadelphia.

Meeting Bradford Brown changed the course of Jearld’s career. Brown was a fisheries scientist at the Northeast Fisheries Science Center's Woods Hole Laboratory from 1962 to 1965 and from 1970 to 1984. He had taken a position as assistant leader with the newly established Cooperative Fish and Wildlife Research Units Program at Oklahoma State University-Stillwater to complete his Ph.D. The Cooperative Fish and Wildlife Research Units Program in the United States Geological Survey is a joint effort between federal and state governments. It is also a host university offering graduate students research opportunities in fisheries and wildlife sciences.

Brown was recruiting black graduate students to the program. He met two of Jearld’s former professors, who were also completing their Ph.D.s at OSU. They recommended he speak with Jearld. Although some people were skeptical about Jearld heading to Oklahoma given the civil rights climate in the country, Jearld accepted the full ride offer. That meant a research assistantship award that covered all expenses.

Less than a week after he arrived in Stillwater Jearld was headed to his first scientific meeting as a graduate student with Brown and three other white men whom he did not know. The 1967 meeting was for the Southern Division of the American Fisheries Society in New Orleans. The meeting was part of the annual meeting of the Southeastern Association of Game and Fish Commissioners. They had to deal with the intense heat and driving hours in a packed station wagon with no air conditioning. More importantly, they had not discussed safety or how to deal with segregated facilities en route to the meeting. The trip was memorable for many reasons.

Graduate school was interrupted when Jearld was drafted into the U.S. Army in 1969 after several occupational and student deferments. He served his two years of military service in Maryland at the Edgewood Arsenal, a biomedical and chemical research facility. There he conducted biological research and was able to work on his master’s studies on channel catfish, the most numerous catfish species in North America. Luckily, he was able to complete the course work, research and thesis necessary to earn his master’s degree in zoology before reporting for military duty. His master’s degree was awarded in 1970 while he was serving in the Army. When his military service ended in 1971, he had several offers to attend other programs. He chose to return to Oklahoma State University-Stillwater to pursue his doctoral studies on the social and reproductive behavior of the honey gourami, earning his Ph.D. in 1975.

Jearld then took several teaching jobs, first as an assistant professor of biology at Lincoln University, the nation's first degree granting historically Black college and university, in southern Chester County in Pennsylvania from 1975 to 1977. He met his future wife, Anna Martins, there. When Anna found a job in counseling services at the U.S. Naval Academy in Annapolis, he left Lincoln and took a teaching job at Howard University in Washington, D.C. During this time, he took advantage of short-term research opportunities at different locations across the country. He didn’t work with saltwater species until projects arose in 1976 with the Lawrence Livermore Laboratory and the University of California with anchovy in San Francisco Bay. He also conducted field work on species in southern California’s Salton Sea. ”It was a great and marvelous experience being introduced into marine fisheries science and management,” he recalls.

In 1977 Brad Brown, who had returned to the Northeast Fisheries Science Center after completing his Ph.D. at OSU, recruited Jearld to spend the summer doing research with marine animals at the center's Sandy Hook Laboratory in New Jersey. The next summer while Jearld was on a part-time appointment at the Woods Hole Laboratory a federal position in research was announced. Jearld applied. Although it was a hard choice to leave Howard University, both Jearld and his wife found professional positions in their respective fields in Falmouth in 1978.  Anna found a counseling position in the Falmouth elementary school system, and Ambrose at the Northeast Fisheries Science Center. He was Chief of the Fishery Biology Investigation, what today is the Population Biology Branch.

Jearld conducted and published research and served as an administrator and manager. In 1985, he became Chief of the Research Planning and Evaluation Section. In 1997 he was named Chief of the Research Planning and Coordination Staff. “Although I didn’t get to do as much research as I would have liked, I realized that if you want to advance in your career you have to see where the opportunities are, and sometimes it involves taking on administrative positions. That was hard, as I had a passion for animal behavior and loved research.” In 2004 he was named Director of Academic Programs at the Northeast Fisheries Science Center, a role he held until his retirement in 2016.

Jearld was the first black researcher with a doctorate degree hired at the Northeast Fisheries Science Center. “I had an interesting career, with a lot of support from various people within the center at many levels,” Jearld says. He also had a passion for education and working with people within the center and in other organizations. In his role as a fisheries biologist and administrator, he provided NOAA with leadership on national and international affairs.

One example occurred in South Africa, where he was a member of the U.S.–South African Bi-Lateral Commission's Working Group on Fisheries. He worked with Sea Fisheries, South Africa, on development and implementation of a strategic plan, organizational restructuring, human resources, and outreach and engagement with higher education Institutions in South Africa. He was also intimately involved in NOAA science and technical support for six West African countries around the Gulf of Guinea.

Throughout his Fisheries career he was also a strong advocate of NOAA's commitment to diversity, equity, and inclusion in employment. He has devoted much of his career to fostering NOAA's goal of maintaining a workplace in which all people are respected as individuals and valued for their contributions. His worked with NOAA and higher education institutions—especially Historically Black Colleges and Universities and other Minority Serving Institutions—and with scientific organizations like the American Geophysical Union and National Science Foundation. These efforts have helped make oceanography and marine sciences more accessible to a diverse body of students and research faculty.

“We are still finding opportunities to get the story of Blacks in fisheries and the environment as complete as possible,” he says. “There were those before me in fisheries—Ernest Miles who made the 1949 trip with Rachel Carson and Marie Rodell on the center's research vessel Albatross III, the first Black summer intern at the Woods Hole Lab in 1962, or Eva Monteiro who worked in the survey unit before I came. We have many hidden figures and unsung heroes who have contributed in some way to bring NOAA Fisheries to where it is today.”

Active in Community and Far Beyond

Jearld is a charter member and former chair of the Woods Hole scientific community's Black History Month Committee. He helped found and was the first chair of the Woods Hole Diversity Advisory Committee, a multi-institution committee that advises six Woods Hole science organizations. He also served from 2009 to 2016 as the first director of the Partnership Education Program, a 10-week summer internship program. It is supported by the six scientific institutions, and introduces underrepresented groups to marine and environmental science and opportunities for career advancement.

One of the examples Jearld cites of opportunities taken is Woods Hole Black History Month. “It made a tremendous contribution to building community and broadening relationships,” Jearld said. “It broke down barriers in Woods Hole and in Falmouth, on Cape Cod and far beyond by getting people from all around the region to come to Woods Hole. They could participate in events like Harambee, attend lectures on topics that many had not been exposed to before, and had the chance to talk with people from different backgrounds and experiences.”

Ambrose Jearld, Jr. retired from NOAA Fisheries in 2016 after 38 years of service, but has remained active in activities he is passionate about. In 2017 the Woods Hole scientific community honored him by naming an annual lectureship on diversity and inclusion in his honor. He has been a member of and served on the boards of numerous professional and technical scientific societies, including the research society, Sigma Xi. He also served as president of the National Technical Association, founded in 1925. It is the oldest African American technical organization in the United States. It has a long legacy in education, research, engineering, science and technology for minorities, women, and youth pursuing technical careers.

“We all are a part of the environment, not adjacent to it,” Jearld said when asked about his thoughts on the 150th anniversary of NOAA Fisheries and its founding at the Woods Hole Laboratory. “We all have interests in the water, in the fisheries, in living marine resources. It doesn’t belong to one group or people of one skin color, it belongs to us all. It took many people from many different backgrounds to build what we have today, and we must continue to work together to build upon that legacy as we move forward.”