NOAA Fisheries expands coverage with research ships, fishing vessels, and Saildrones off the West Coast of the United States and Mexico. 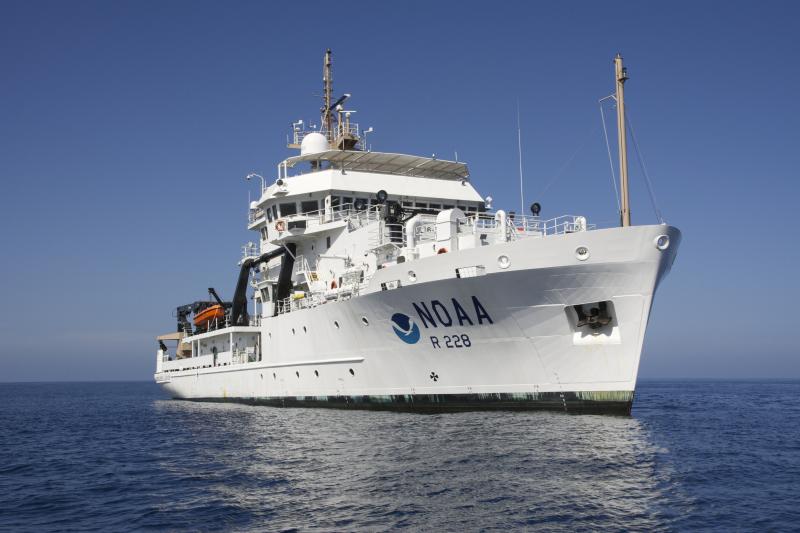 NOAA Fisheries has begun an ambitious assessment of small pelagic fish reaching from the Canadian border to the southern tip of the Baja Peninsula, in cooperation with Mexico, which will help determine how many fish can be caught off the West Coast.

The COVID-19 pandemic had idled surveys for sardine, anchovy, and other species of small coastal pelagic species (CPS) off the West Coast since 2019. Small pelagic species are important ecologically and provide food for larger fish, such as tunas. The new assessment resumes regular CPS  surveys by collecting data from NOAA Ship Reuben Lasker, commercial fishing vessels equipped with acoustic technology, and autonomous Saildrones.

The Lasker left San Diego on July 6, becoming the centerpiece of the 3-month survey. It will cover thousands of miles in U.S., and Mexican waters. NOAA Fisheries scientists are coordinating efforts with federal fisheries agencies in Mexico and Canada, providing a science foundation for future decisions on fishing levels and seasons.

“Organizing and coordinating this survey was a tremendous feat of collaboration,” said Kristen Koch, Director of the Southwest Fisheries Science Center in La Jolla, which is leading the survey. “Collecting data across all three countries will provide a valuable foundation for management of these important transboundary species.”

The Lasker will survey coastal pelagic fish along transects in the California Current, quantifying the fish with echosounders. These instruments include an advanced new model that can for the first time also measure the velocities of fish as they swim relative to the ship. The measurements will help to understand whether and how fish respond to survey vessels and if those reactions affect the quality of data on the numbers and distributions of fish.

The fishing industry vessels Lisa Marie and Long Beach Carnage will join the survey effort in waters closer to shore and shallower than Lasker can sample. This collaboration with the fishing industry expands sampling nearer the shore, more fully capturing the fish present in shallower waters. Meanwhile, autonomous Saildrones will improve the survey precision and accuracy by increasing sampling in areas with higher fish abundance and allow Lasker to cover a larger area.

“We’re making use of a combination of resources in ways that should yield complementary data and increase the information about seven populations of five fish species,” said David Demer, Advanced Survey Technology Program Lead at the Southwest Fisheries Science Center and Chief Scientist of the survey.

After surveying U.S. waters, Lasker for the first time will continue south to cover waters around the Baja California Peninsula in Mexico. Where Lasker concludes sampling, the Mexican research vessel Dr. Jorge Carranza Fraser will sample the Pacific and Gulf of California coasts of the Baja Peninsula. The two ships will use the same protocols so their data can be combined into more comprehensive analyses. Scientists from Mexico’s national fishery agency, the National Institute of Fisheries and Aquaculture, or INAPESCA, will join Lasker to foster cross-training and collaborations.

Dr. Pablo Roberto Arenas Fuentes, General Director of INAPESCA, highlighted that not since the late 1980s has such a combined international effort been assembled. He said this joint survey, using the same methodologies and data analysis between nations, truly represents something never done before on the scale of the California Current.

“The historic collaboration between INAPESCA and NOAA Fisheries represents the first time we will combine research methods to focus acoustic evaluation on the biomass of small pelagic fish,” he said. “This will generate continuous biological and environmental data along one of the most important coastal ecosystems of the North American continent.”

The survey will examine the abundance and distribution of the three subpopulations of Pacific sardine in the California Current, two of which are potentially fished by the United States and Mexico. The northern subpopulation historically occurred largely in Canadian and U.S. waters but declined to such low levels in recent years that the fisheries have been closed since 2015.

“The joint analysis will improve our knowledge of the distribution and abundance of these species at the regional level, which will support important fisheries,” said Dr. Pablo Arenas.

Additional information will also serve to assess the total abundance and extent of northern anchovy, and the jack and Pacific mackerel populations in the survey area. Anchovy have been extremely abundant in the California Current in recent years. Pelagic fish are known for boom-bust fluctuations in their populations.

“Integrated surveys, such as this one, are essential in helping us understand how these populations change and shift over time so we can ensure that fisheries are sustainable,” said Josh Lindsay, fisheries biologist with NOAA Fisheries West Coast Region.

The Lasker, the Fraser, Saildrones, and the industry vessels all use advanced echosounders emitting sound waves to detect and map fish schools. Each of the crewed vessels then deploy either trawl or purse-seine nets to catch samples of the fish. The net catches identify the species of fish that reflect sound in each area, and their lengths, ages, and reproductive status.

In 2020, NOAA Fisheries’ Saltonstall-Kennedy Competitive Grants Program awarded funding to Ocean Gold Seafoods to help pay for the Lisa Marie to participate in the survey and provide more complete data. “The Coastal Pelagic Species industry feels strongly that it has a stake in robust fisheries management of this complex and dynamic assemblage, which can only be achieved with extensive data collection efforts,” industry supporters wrote in their application for the funding.

The cooperative research that combines NOAA Fisheries science and insight from fishermen provides long-term benefits for both. It is an area of increasing focus for NOAA Fisheries.

“The immense scale and scope of the survey is really significant,” said Joel Van Noord, a biologist with the California Wetfish Producers Association who will join the survey aboard Long Beach Carnage. He said the fishing fleet benefits from high-quality data on fish populations that help ensure they are managed sustainably, providing continuing benefits to fishing communities and the marine ecosystem.