The unique green color of the Latrunculina austini sponge gives it St. Patrick’s Day spirit all year long. Instead of a pot of gold, this sponge’s value lies in its molecular chemical composition—it targets and kills pancreatic and ovarian tumor cells. 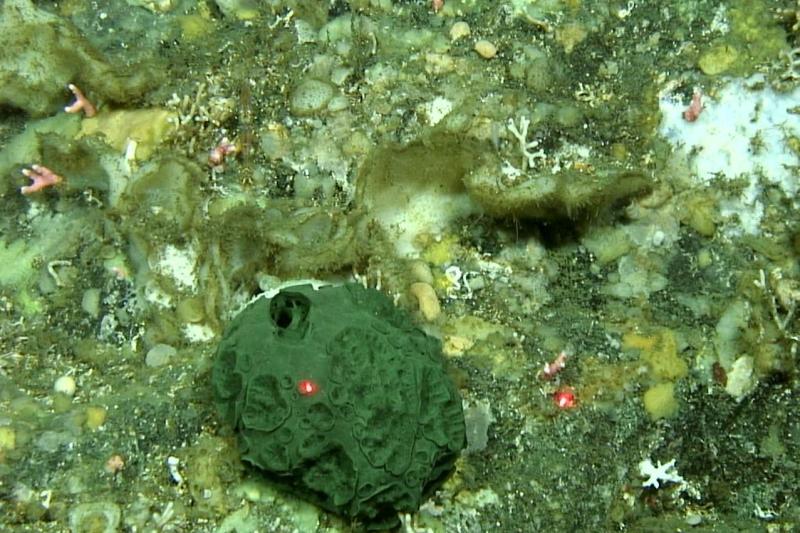 During dive expeditions, submersibles use various cameras and sensors to survey the seafloor and water column. In this image, red lasers beamed from a submersible are being used to measure the size of a Latrunculia austini sponge. Credit: Bob Stone/NOAA Fisheries.

The little green sponge, Latrunculina austini, has chemical extracts that can kill pancreatic and ovarian cancer cells. It was initially spotted at the bottom of the Alaska North Pacific Ocean during a 2005 mission to study the seafloor. When NOAA Alaska Fisheries Science Center researcher Bob Stone saw the sponge’s striking color from the expedition’s submersible, he knew it was worthy of collection. Stone realized this sponge looked like another species he had been collecting for Mark Hamann, a cancer researcher at the Medical University of South Carolina. Hamann has studied connections between marine life and medicine for more than 20 years.

Sponges are typically soft and squishy with no structural defense mechanisms, so they create chemicals to ward off predators. Kaya Mondry, a Hollings Scholar who has been conducting literature reviews for Hamann’s research, says the L. austini sample “had a strong smell, which sometimes indicates that it contains a chemical with potential for drug development.” The sponge sample was packed and sent to the Henry Ford Cancer Institute to be examined in a controlled environment.

Lab tests from the institute revealed that the green sponge’s chemical extracts can kill pancreatic and ovarian cancer cells. This is an amazing biological feat, considering that these types of cells are slow-growing and thus unresponsive to traditional cancer treatment methods. Scientists claim fewer than one in 100 sponge extracts exhibit the same anti-cancer activity as this sponge, making it a rare and exciting find!

A couple of problems arise when working with L. austini. Collecting the sponge is difficult because it lives in the deep ocean, and the cancer-treating compounds only occur in small quantities. However, Hamann is currently synthesizing the molecule in his laboratory.

Discovering additional important deep-sea coral and sponge habitats has become a main goal of the National Ocean Mapping, Exploration, and Characterization Council. NOMEC is a board of federal and non-profit partners working to map, explore, and characterize U.S. federal waters, also known as the U.S. Exclusive Economic Zone. An early piece of NOMEC planning involved selecting priority areas for ocean exploration and characterization. The Aleutian Islands and Slope in Alaska—just west of the site where the L. austini was first found—was deemed a high priority. By focusing on the exploration and characterization of Alaska’s waters, scientists will be able to uncover further Alaska deep-sea coral and sponge communities through mapping. They will also support bycatch research for Alaska’s $1.8 billion fishing industry.

With only 28 percent of Alaskan waters mapped as of 2020, mysteries and opportunities abound in this region. Scientists truly struck gold with the fascinating little green sponge!

Last updated by Office of Habitat Conservation on March 31, 2022