Hundreds of species have yet to be described in the ecosystems that support Alaska’s valuable commercial fisheries. 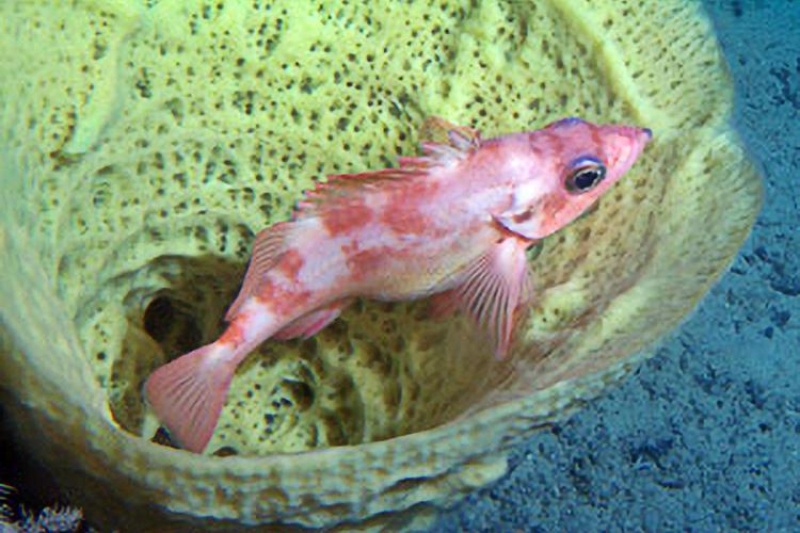 A pregnant sharpchin rockfish shelters within a sponge on the seafloor off Alaska. Credit: NOAA Fisheries.

Deep beneath Alaska’s cold waters dwell some of the world’s most diverse and abundant sponge communities. These living structures provide essential habitat and refuge for many commercially important fish. Identifying sponge species and where they live is key information for ecosystem-based fisheries management in Alaska.

Despite their importance, much remains to be learned about Alaska’s deep-sea sponges. Scientists have identified 52 species of sponges in the Gulf of Alaska and over 125 in the Aleutian Islands. An estimated several hundred species have yet to be described.

NOAA Fisheries is leading a new collaborative project taking a major step to advance knowledge of Alaska deep-sea sponge and coral ecosystems. The team is creating a reference library of Alaska sponge taxonomy and genetic sequencing as part of NOAA’s ongoing Alaska Deep-Sea Coral and Sponge Initiative. The project will provide information critical for effective management of the ecosystems that support Alaska’s valuable commercial fisheries.

“This project brings together traditional taxonomic expertise and newer genetic approaches. That lets us verify sponge species identifications and  get the accompanying genetic information,” said Sean Rooney, a NOAA Fisheries biologist at the Alaska Fisheries Science Center. “This is important as traditional taxonomic methods are slow and expensive, while genetic methods are becoming increasingly cost-effective and easy to apply to many samples. The information we will collect also opens the door to new technologies such as analyzing eDNA [DNA released by organisms into seawater] that will allow us to indirectly sample large areas without disturbing the seafloor and these vulnerable ecosystems.”

Sponges may evoke visions of tropical waters, but they are abundant and ecologically important members of Alaska’s marine ecosystems. Deep-sea sponges can thrive in waters that are cold, acidic, and low in oxygen. These conditions are common in deep waters off Alaska.

Deep-water sponges can live for hundreds or thousands of years. These living structures create complex habitats for other animals, including many commercially important fish and invertebrates.

“Sponges can provide protection from predation, feeding opportunities, and nursery grounds for commercial species, like rockfish, spot prawns, and golden king crabs.” Rooney said. “Some fish deposit their eggs in particular species of sponges. The sponges act as a refuge from predators. Their natural antibacterial and anti-fungal properties also potentially benefit the eggs.”

Beyond their value as habitat for commercially valuable species, complex deep-sea sponge and coral communities also provide habitat for numerous other species. The wealth of diversity they support holds special importance in a changing climate.

In addition to their importance in marine ecosystems, some Alaska sponges have also been found to have great potential biomedical value. For example, some sponges produce chemicals that are being investigated for use in cancer treatments.

Deep-sea corals and sponges are slow-growing, long-lived, and sedentary. This makes them vulnerable to disturbances from human activities such as commercial fishing, construction, and oil exploration. They are also vulnerable to impacts of climate change and ocean acidification.

To effectively predict and mitigate impacts of human activities and climate change on deep-sea coral and sponge ecosystems, managers need to know where these animals are located in high abundance and diversity. Due to the vast size of Alaska’s seafloor, very little of the area has been surveyed for coral and sponge distributions.

The Alaska Deep-Sea Coral and Sponge Initiative was established to provide the scientific information needed to manage and protect deep-sea coral and sponge ecosystems in Alaska. The first challenge scientists face in mapping distributions of corals and sponges is identifying them.

“Our knowledge of deep-sea sponges is still very much in a discovery phase,” said Sean Rooney. “It is not unusual to encounter species in our trawls that have rarely been observed or are even new to science.”

“Our sponge identification project addresses an urgent priority of the North Pacific Fishery Management Council by providing information essential for sustainable management in a time of change,” Rooney said.

The new project builds on findings from a previous Alaska Deep-Sea Coral and Sponge Initiative. An important accomplishment of the earlier Initiative was the production of maps of predicted locations of corals and sponges in the eastern Bering Sea, Gulf of Alaska, and Aleutian Islands. These maps show that coral and sponge ecosystems can predictably be found in areas with hard seafloor substrate.

Identifying Sponges in the Gulf of Alaska and Aleutian Islands

To develop the library, the team is collecting sponge specimens from the bycatch of Alaska Fisheries Science Center bottom trawl surveys in the Gulf of Alaska (summer 2021) and Aleutian Islands (summer 2022).

“To date we have been able to collect several hundred samples of various sponges,” Rooney said. “These along with previously collected historical specimens will be evaluated for further genetic and taxonomic analysis.”

“Identifying sponges poses some unique challenges. Species come in myriad shapes, colors, and textures. Some species look different between different geographic areas or habitats, making identification difficult even for the expert. And unfortunately there is a global shortage of taxonomists, including those working on sponges,” Rooney said. “We are lucky to be able to collaborate with our partners in Germany to develop this library.”

The project will also develop new molecular tools to apply to the study of deep-sea sponges. Genetic markers will be sequenced by Meredith Everett, NOAA Fisheries Biologist at the Northwest Fisheries Science Center. These DNA barcodes will be used to establish a genetic voucher library to identify sponge bycatch. The library will help scientists better understand the diversity of sponge species, relationships among them, and their role in North Pacific ecosystems. It will also be a critical resource for future eDNA sequencing endeavors.

“Genetic resources are increasingly important for better understanding diversity in cryptic groups like sponges. Once developed, a voucher library allows more rapid identification of species and bycatch,” Everett said. “We’ve successfully applied these tools to Alaskan coral species. This is a great opportunity to develop similar resources for sponges”.

Besides providing information critical for effective ecosystem-based fisheries management, the project will feed into other research. It will contribute to a field guide to corals and sponges of the Northeast Pacific Ocean to aid species identification on commercial fishing boats and research surveys. The molecular barcode collections will be crucial to future eDNA research.

Rooney also anticipates new discoveries. “Each haul we bring up has its own set of surprises. You never know what you are going to find.”