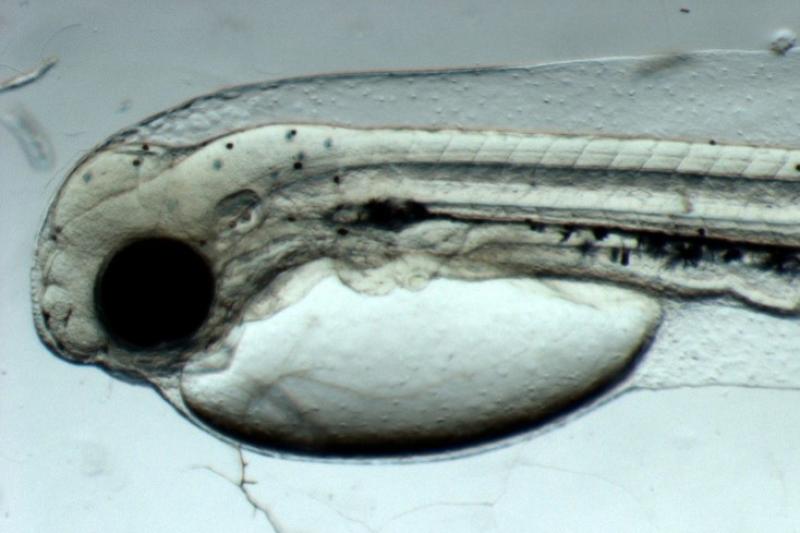 For a young Pacific cod, first feeding is a life-or-death moment. Cod larva are nourished by a yolk sac after they hatch. Once the yolk sac is depleted, they must find food within days in order to survive. If there is no prey available during that critical window for first feeding, young fish face starvation.

Warming Alaska waters are increasing the risk of prey mismatch and starvation for cod larvae, a new study finds.

NOAA Fisheries scientists collaborated with our partners to look at how temperature shifts affected first feeding Pacific cod larvae in two large ecosystems: the southeast Bering Sea and Gulf of Alaska. The models made predictions for 1998–2019, a period that encompassed warm and cool years, including a series of extreme heatwave events beginning in 2014.

“Warming can increase the metabolic demands of fish and shift the timing of their food production. So you have temperature unravelling the system, moving food around. And you have fish needing food now. When mismatched prey timing and increased metabolic demand line up, it can be pretty disastrous,” said Ben Laurel, NOAA Fisheries scientist at the Alaska Fisheries Science Center, who led the study. “The better we can understand and predict these effects, the more effectively we can manage them now and in the future.”

Early Life and the Match-Mismatch Hypothesis

Survival during the first year of life is critical to determining how many fish will live to a size commercial fisheries can harvest years later. Few young fish make it to their first birthday. Small changes in that enormous first-year mortality have a big influence on the number of adult fish produced from that cohort.

The “match-mismatch hypothesis” was first proposed in 1969. It suggests that the match in timing of larval first feeding and production of their zooplankton prey is key for larval survival.

Pacific cod are single-batch spawners: they release all of their ripe eggs at once, once each spring. This very narrow reproductive window—and therefore, window for first feeding— may put them at higher risk of prey mismatch.

Under global warming, that risk is likely to be greater in the future.

“Changing environmental conditions could lead to ‘super mismatch events’ with low survival across an entire region,” Laurel said. “If we can understand the mechanisms by which temperature effects change, we can better forecast such events and help fishing communities prepare.”

“We have always seen relationships between temperature and marine populations. But we don’t always know how temperature drives change,” Laurel said. “Stakeholders want to know why there are no fish in a given year. It’s important to have answers, to understand why things are happening, and by what processes.”

Laurel has studied the early life stages of cold-water commercial fish species for more than 20 years. His research has focused particularly on how cod is responding to rapidly changing environmental conditions in Alaskan waters.

In 2017, NOAA Fisheries scientists at the Alaska Fisheries Science Center reported a steep drop in numbers of adult cod. This followed a marine heatwave—called “The Blob" — during 2014–2016. These losses challenged the fishery and prompted new efforts by our scientists to understand what influences survival of young cod.

“We started our research when cod populations were healthy in both the Bering Sea and Gulf of Alaska. We were conducting experiments on the influence of temperature on larvae just to learn more about the biology of these important fish,” Laurel said. “When the marine heatwave hit, understanding these interactions took on a new importance."

Laurel’s team applied these data to examine how match-mismatch dynamics may have impacted survival of larval Pacific cod, and whether these processes differed between the two Alaska ecosystems.

“This research would never have happened without an interdisciplinary team, playing to everybody’s strengths. I’m a biologist, working with ocean color specialists and modelers. The study draws on laboratory experiments, survey time series, satellite data, and quantitative modeling,” Laurel said. “None tells the story alone, but together they do.”

The story that emerged showed that warming is increasing the risk of prey mismatch for cod larvae through changes in both timing of prey production and larval metabolic demands. Projected future warming will likely further increase prey mismatch vulnerability for cod larvae across all regions.

“We already knew from rearing cod in the lab that larvae are really sensitive to temperature,” Laurel said. “But it was really surprising when we put all the pieces together and saw their response in these systems. Looking at all these things together, you see how larval habitat can change among years.”

The effect of the heatwave on survival potential of cod larvae was greater in the Gulf of Alaska than in the Bering Sea. The drivers of mismatch were fundamentally different between the two systems.

In the Bering Sea, timing of prey production has historically been more variable, but mismatch effects continue to be buffered by cooler temperatures.

“Spring plankton production in the Bering Sea is tied to the timing and extent of sea ice cover, which fluctuates widely from year to year,” Laurel said. “But cooler temperatures in the Bering Sea buffer food demands of fish larvae so that they are not as sensitive to timing. ”

In the Gulf of Alaska, the timing of prey production historically has been less variable, but warmer temperatures mean larvae are more sensitive to variability. Larvae use yolk sac reserves faster and have less time to find food once they are depleted.

“Climate warming means both higher metabolic demands and shifts in the timing of prey production,” Laurel said. “In the Gulf of Alaska, young cod are facing double jeopardy.”

“Our findings illustrate the complexity of temperature effects. We saw both obvious direct effects and really surprising indirect effects,” Laurel said. “The story really shows how warming can quickly unravel an ecosystem through intertwined processes.”

The new habitat models expand on match-mismatch theory, providing a tool that can be used to examine how fish populations experience different levels of climate stress across regions.

“The match-mismatch hypothesis has been around for decades, but only in one dimension: timing. We’ve built on that foundation by adding spatial and metabolic components,” Laurel said.

Understanding how environmental conditions affect early life survival provides a window into their recruitment potential: how many fish will be available to the commercial fishery in three years.

“Now we have another early warning metric for stock status that can potentially be used for improving ecosystem-based fisheries management in Alaska,” Laurel said.