Get to know the rarest dolphin in Hawai‘i and the threats they face. 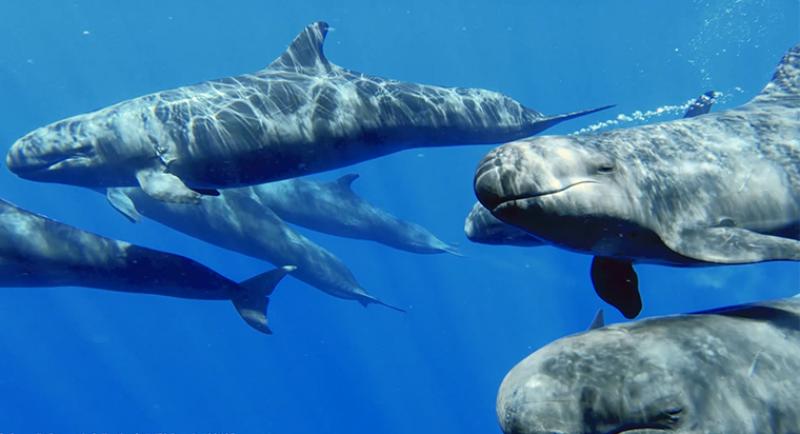 When it comes to marine mammals in Hawai‘i, there are certainly a few stars who always steal the show. It might be koholā (humpback whales) and their multi-thousand-mile migration, ‘īlioholoikauaua (Hawaiian monk seals) pupping at popular beaches, or nai‘a (spinner dolphins) resting in calm, nearshore bays. Either way, these iconic animals captivate residents and visitors alike. But among the lesser known members in the cast of local marine mammals is a large, intelligent animal known as the false killer whale.

False killer whales—despite their name—are actually a type of dolphin. While they share some of their namesake with a killer whale due to their similarly-shaped skulls, their external appearance is quite distinct from their popular “sea panda” cousins.

False killer whales do, however, resemble a lot of other dolphins that reside in Hawai‘i waters, including the short-finned pilot whale, melon-headed whale, and pygmy killer whale. (These dolphins are all commonly known as “blackfish,” although they’re certainly not fish and not necessarily all black in color, either.) All these species are more common in Hawai‘i than false killer whales, and they’re challenging to distinguish from one another, even for experienced ocean users.

If you’re lucky enough to spot a false killer whale, their distinctive athletic abilities and behavior might give away their identity, even among similar-looking species. They’re the fastest moving and most acrobatic among this “blackfish'' group, regularly breaching entirely out of the water. This puts their streamlined, torpedo-like body into full view. With the aid of binoculars or a telephoto lens, you might even be able to see their most distinctive feature: their S-shaped flippers. And if these clues don’t give them away, the time of day just might. Short-finned pilot whales, melon-headed whales, and pygmy killer whales often rest during the day, floating relatively motionless near the surface—but daytime is when false killer whales are most active.

Three distinct populations of false killer whales (groups that don’t interbreed) are found across Hawai‘i. The Northwestern Hawaiian Islands population, with approximately 500 individuals, lives in the waters between Kaua‘i and at least as far west as Pūhāhonu (also known as Gardner Pinnacles or ‘Ōnūnui and ‘Onūiki) in the Papahānaumokuākea Marine National Monument. The pelagic population predominantly dwells in waters far offshore across the entire archipelago, and consists of approximately 2,000 animals. The main Hawaiian Islands insular population, found in more nearshore waters from Hawai‘i Island to Ni‘ihau, has declined precipitously in recent decades. It currently numbers less than 200 individuals. As such, this population is facing extinction and is federally listed as endangered.

NOAA Fisheries and partners are currently working to understand how best to mitigate fisheries interactions with false killer whales. We are also trying to more accurately assess the status, abundance, and trends of the insular population.

In November 2021, we released a Recovery Plan and Implementation Strategy for the endangered main Hawaiian Islands insular false killer whale. This is a critical step towards reversing the course that threatens this population with extinction.

But researchers aren’t the only ones lending a hand. Community scientists, usually in the form of fishermen and boaters, actively contribute photos and sighting reports to the cause.

The unique shape and markings on each animal’s dorsal fin and body are distinctive enough that they can serve as a “fingerprint” for identifying individuals. Cascadia Research Collective—a key partner supporting a NOAA Fisheries Species Recovery Grant awarded to the State of Hawai‘i—has identified nearly all of the individuals in the endangered population through their dorsal fin photo records.

New photos become part of the team’s long-term photo-ID catalog. These identification photos can be used to estimate how many animals are actually in the population and also provide important demographic data. This includes sex, age, size, and even relationships—like mother-calf pairs and social structure of the population. Photos can also help track injury rates and determine how well specific injuries are (or are not) healing from entanglement in fishing gear or marine debris and cookie cutter shark bites.

For the rarest cetacean in Hawai‘i waters, a little paparazzi—albeit at a distance of at least 50 yards—may just give Hawaiian false killer whales their big break.

To make a report, provide as much detail about the sighting as possible such as date, time, and location. You can even submit dorsal fin photos if you have access to a camera with a zoom lens. Just be sure to keep your distance (50 yards) from the animals to avoid disturbing their natural behavior and prevent vessel strikes.