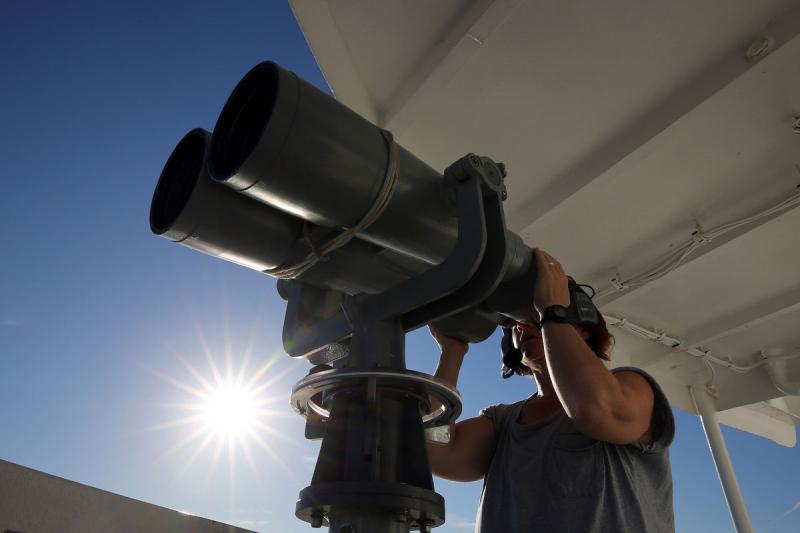 Researchers search the Gulf of California for some of the last remaining vaquita, a highly endangered species of small porpoise.

The critically endangered vaquita has survived in low numbers in its native Gulf of California for hundreds of thousands of years, a new genetic analysis has found. The study found little sign of inbreeding or other risks often associated with small populations.

Gillnet fisheries have entangled and killed thousands of vaquitas in recent years and scientists believe that fewer than 20 of the small porpoises survive today. The new analysis demonstrates that the species’ small numbers do not doom it to extinction, however, and so gives hope for the small remaining population. Vaquitas have long survived and even thrived without falling into an “extinction vortex,” the new study showed. That’s a scenario in which their limited genetic diversity makes it impossible to recover.

“The species, even now, is probably capable of surviving,” said Phil Morin, research geneticist at NOAA Fisheries’ Southwest Fisheries Science Center and lead author of the new study published this week in Molecular Ecology Resources. “We can now see that genetic factors are not its downfall. There’s a very good chance it could recover fully if we can get the nets out of the water.”

An increasing number of species in addition to the vaquita have maintained small but stable populations for long periods without suffering from inbreeding depression. Other species include the narwhal, mountain gorilla, and native foxes in California’s Channel Islands. Long periods of small population sizes may have given them time to purge harmful mutations that might otherwise jeopardize the health of their populations.

“It’s appearing to be more common than we thought that species can survive at low numbers over long periods,” said Morin, who credited the vaquita findings to genetic experts around the world who contributed to the research.

The idea that vaquitas could sustain themselves in low numbers is not new. Some scientists suspected that more than 20 years ago. Now advanced genetic tools that have emerged with the rapidly increasing power of new computer technology helped them prove the point.

“They’ve survived like this for at least 250,000 years,” said Barbara Taylor, research scientist at the Southwest Fisheries Science Center. “Knowing that gives us a lot more confidence that, in the immediate future, genetic issues are the least of our concerns.”

The new analysis examined living tissue from a vaquita captured as part of a last-ditch international 2017 effort to save the fast-disappearing species. The female vaquita tragically died, but its living cells revealed the most complete and high-quality genome sequence of any dolphin, porpoise, or whale to date, generated in collaboration with the Vertebrate Genomes Project. Sequencing was led by Olivier Fedrigo, Jacquelyn Mountcastle, and Erich Jarvis at the Rockefeller University. “We felt it our moral duty to generate a high-quality reference of this species on the brink of extinction”, said Jarvis. Only in recent years have advances in sequencing technologies and high-powered computers made such detailed reconstruction possible.

While the vaquita genome is not diverse, the animals are healthy. The most recent field effort in fall 2019 spotted about nine individuals, including three calves, within their core habitat. The robust calves suggest that inbreeding depression is not harming the health of these last vaquita. “These examples and others indicate that, contrary to the paradigm of an ‘extinction vortex’ that may doom species with low diversity, some species have persisted with low genomic diversity and small population size,” scientists wrote in the new study.

The genetic data suggest that the vaquita’s isolated habitat in the far northern Gulf of California has sustained roughly 5,000 vaquitas for around 250,000 years. The advent of gillnetting for fish and shrimp only a few decades ago drove vaquitas towards extinction, as they are incidentally caught in the nets.

More recently, Illegal gillnetting for totoaba, a fish about the same size and found in the same habitat as the vaquita, has compounded the losses. The practice has caused a catastrophic decline that is estimated as cutting the remaining population in half each year.