“An Era of Surprises”: Studying Climate Change and Salmon with Nate Mantua

NOAA Fisheries scientist Nate Mantua discusses why he started studying salmon as well as how climate change and anchovies are threatening salmon on the West Coast. 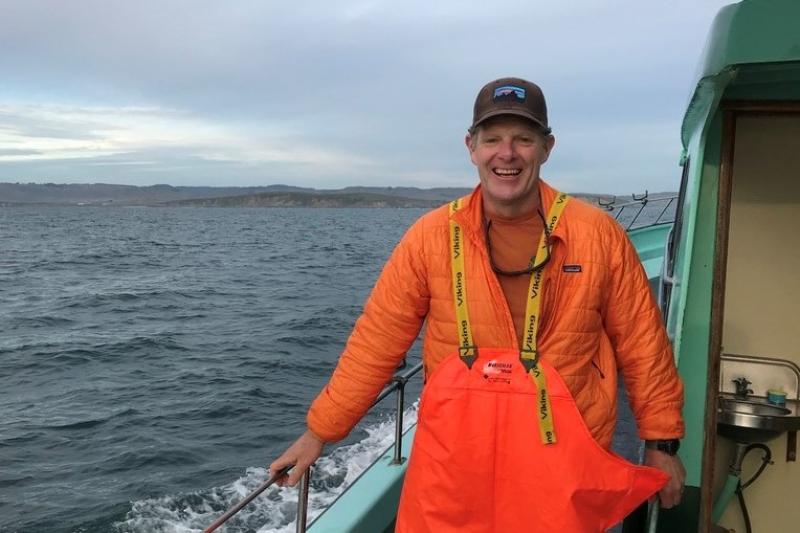 Nate Mantua off the coast of Sonoma County on the New Sea Angler, a charter boat based in Bodega Bay that is part of the cooperative salmon sampling program. Photo courtesy of Nate Mantua.

Growing up in a Northern Californian fishing town, Nate Mantua’s family owned a business connected to the local salmon fishing industry. When one of the worst El Niño events ever recorded hit the West Coast in 1982 and 1983, the salmon fishery his family relied on suffered. Nate would go on to study how to predict El Niño events in graduate school, years later. Now he works to understand the impacts of climate change.

This interview was condensed and edited for clarity.

How did you go from studying El Niños to researching salmon?

Yeah, El Niño was a really big part of my career. It still is. About 25 years ago, I partnered with some people who were working on Alaska salmon. They had really exciting results showing that this El Niño-like pattern that we ended up calling the Pacific Decadal Oscillation had a big impact on Alaska salmon production. When it was warm, those Alaska salmon populations tended to increase dramatically, and when it was cold, they tended to decline. We found that just the opposite was happening at the southern end of Pacific salmon’s range; the warm periods tended to be bad for the West Coast salmon.

How has climate change impacted salmon in the western United States?

We've talked a lot about marine heat waves in the last seven years and we never talked about them in the 1990s or early 2000s. We just had a series of marine heat wave events that negatively impacted salmon in places like Alaska. Twenty years ago, we thought warming would probably be good for them, but that’s not true now. Warming in Alaska’s large salmon rivers—like the Yukon River and the Kuskokwim—has come with chronically low numbers of chum and Chinook salmon. These rivers traditionally supported subsistence and commercial fisheries that provide reliable and nutritious sources of food, critical to rural Alaskan culture.

Things here locally, in California, that are really troubling to see are extended drought periods. Small coastal streams won't connect with the ocean because of a lack of rainfall, runoff, and streamflow. Adult salmon and steelhead have a limited window of time to enter their home streams in order to spawn in winter so that their eggs incubate in cold water, and their offspring hatch at times and in places where juvenile rearing conditions are suitable. During extended dry spells larger sections of our coastal streams are dry for unusually long periods of time, resulting in less rearing habitat. In the larger watersheds like the Klamath, Sacramento, and San Joaquin, drought has come with sharply limited supplies of the cold water that salmon need. This has intensified chronic conflicts with other uses for freshwater. These drought conditions have contributed to widespread declines in salmon abundance.

So you’re seeing these impacts inland—in streams and rivers. What about in the ocean?

Things that I've seen out of the ocean have been equally astounding in the last few years. Something that has come as a great surprise is the resurgent abundance of northern anchovies off Central California. Up until five years ago, the conventional wisdom was that California anchovies would be most abundant during the years with strong upwelling and cold ocean temperatures. But there was a sudden boom in anchovy abundance that started around the beginning of the marine heat wave in 2014. Anchovy abundance and spatial distribution kept expanding through the record warm period that extended into 2016. Right now the Central stock of California anchovies looks to be at a record high. Our La Jolla lab’s ecosystem survey in 2021 found that abundant anchovies dominated the forage fish community from San Diego to Cape Mendocino. It's just another surprise. We look to have crossed an ecosystem threshold we didn't know existed—or at least, I didn’t know existed!

If that continues, I would imagine that more and more West Coast salmon will be exposed to this incredible anchovy abundance. And they love anchovies, they grow really well on it. The salmon out in the ocean that I saw last year looked fat and healthy.

Does this abundance of anchovy raise any concerns?

Yes, it has created some new conditions for our salmon that we need to address and better understand. Thiamine deficiency is a new threat that was documented for the first time in 2020 in Central Valley Chinook salmon. California hatchery staff saw young salmon, or “fry,” behaving weirdly and dying at unusually high rates at multiple hatcheries. Fish health experts looking into this discovered that it was a thiamine deficiency. After putting symptomatic fry in a vitamin bath, sure enough, the fry recovered within a day, and started feeding and behaving normally.

There are at least two ideas proposed for thiamine deficiency in salmon. One focused on salmon feeding on forage fish that contain thiaminase, an enzyme that degrades or destroys thiamine in the gut cavity of the consumer.  The other is that lipid-rich diets lead to oxidative stress that depletes salmon’s thiamine stores. A heavy anchovy diet looks to be problematic for salmon because anchovies are both lipid (fat) rich and they contain elevated levels of thiaminase. So both these ideas point towards anchovies being a problem when they dominate a predator’s diet. We have salmon gut content data from 2020 and 2021 showing that anchovies were by far the dominant prey item for Chinook salmon caught in ocean fisheries off California’s Central Coast. Fishermen reported the same for salmon caught in 2019.

How can we solve this problem?

You can treat fish by giving them vitamin supplements before they spawn or by putting the eggs in a vitamin bath before they're fertilized and the offspring will be okay. But we can't do that in natural spawning areas. We don't have that ability to get our hands on all the fish. So if this persists it could drive affected salmon populations more in the direction of hatchery dominance.

We've partnered a lot with other agencies and organizations on research and hatcheries management. We’ve rapidly developed insights and treatment options for thiamine deficiency. They’ve come up with treatments that really work for fish that are in their hatcheries. Two hatcheries are injecting prenatal vitamins into the spawning females to reduce the impacts. But reliance on hatcheries comes with a lot of risks in terms of the lack of diversity in these fish, something that has been noted as a threat to the resilience of salmon populations that are already struggling for other reasons.

What else can be done to help salmon adapt to climate change?

On the good news side, we know what actions are needed to make things better for salmon, and some major actions are happening. Four big dams on the main stem of the Klamath River are going to be removed starting in either 2023 or 2024. Those dams have been there for about a century, blocking hundreds of miles of habitat—the coldest, highest elevation habitat in that system. That could be really dramatic for improving habitat options and quality for salmon in the Klamath River. Making some space for climate change is the way I think of it.

Other important actions include those that leave water in our rivers at times of year when the fish need it. People put great demands on California’s freshwater, and conflicts between in-stream and out-of-stream uses have been a lot more difficult to sort out, especially in drought years.

What is a challenge you have faced with this research?

COVID-19 made things harder. All of our research surveys were shut down in 2020, so we didn't get out on the ocean at all. We had incredible support from commercial fishermen and charter boat captains that target the salmon fishery. There are people that have just gone way above and beyond the call of duty to help us out. Starting in 2020 during the pandemic, we relied on fishermen to collect samples for us when we couldn't go out. They provided critical information for us. Now our surveys are back on the water, but the fishermen have continued to help us.