North Atlantic right whales are in crisis and will go extinct if the current population decline is not reversed. Learn how NOAA Fisheries scientists are tracking right whales using acoustic monitoring in this Q&A. 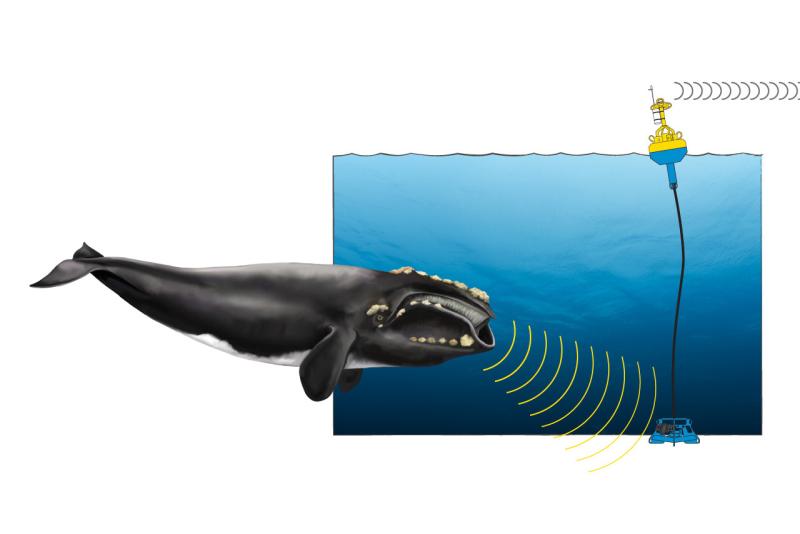 When a right whale travels through the range of a bottom-mounted passive acoustic monitoring buoy and makes its distinctive call, the instrument detects the call and transmits data up the cable to the buoy, which relays the information to a satellite, which sends the information to researchers in near-real time. Credit: Eric S. Taylor © Woods Hole Oceanographic Institution.

Editor's Note December 17, 2021: When this interview was conducted in 2018, there were an estimated 450 North Atlantic right whales remaining. The latest preliminary estimate suggests there are now fewer than 350.

NOAA scientists have documented changes in the North Atlantic right whales’ distribution (population density) and migration patterns over the past decade. It isn’t yet clear what is causing these changes; warming oceans may be affecting the location and abundance of the zooplankton the whales need to survive, or human activities may be impacting the whales. Whatever the reasons, knowing where these whales are and where they are likely to be is crucial for understanding potential conflicts with fisheries and ships in order to make location-based conservation measures effective (e.g., time-area closures for fishing or vessel speed restrictions). 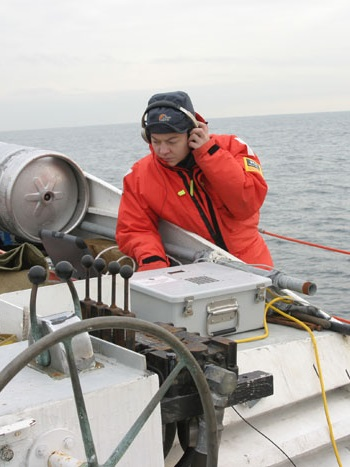 What have you learned about North Atlantic right whales’ distribution and migration patterns through your passive acoustic research?

We’ve learned a lot recently—there have been some fascinating surprises. We’ve seen major shifts in their migration patterns and in where they’re spending their time. Fewer are going to northern Maine, while more are gathering farther north near the Gulf of St. Lawrence in Canada—a busy shipping and fishing area. They’ve also increased the time they spend in the mid-Atlantic region. Previously, we thought most North Atlantic right whales went to calving grounds off Florida and Georgia in the winter and then migrated to northern feeding grounds off Maine in the summer. But it turns out that not all of these whales migrate each year; they’re all along the East Coast, especially during winter.

How did you learn about these major shifts?

All of these findings are from a big passive acoustic monitoring study we completed in 2017 in collaboration with 19 organizations (including the Stellwagen Bank National Marine Sanctuary, Duke University, and the Woods Hole Oceanographic Institution). The study was based on more than 35,600 days of data that NOAA and these partners collected and combined from 324 listening devices between 2004 and 2014. This was the first long-term passive acoustic study looking at the right whale’s entire habitat range.

How does this new knowledge about right whales’ distribution and migration patterns help address the crisis they’re facing?

Scientists and resource managers can use this information to better identify and then protect areas that are crucial for this species. For example, because ship strikes are one of the leading causes of North Atlantic right whale deaths, it’s important for resource managers to know when and where there’s a greater risk of ship strikes so they can set up effective protections.

Since you started at NOAA over a decade ago, what are some technological changes you’ve seen in your work?

Over the past decade, there have been a lot of advancements in acoustic monitoring technologies, in large part thanks to collaborative innovation. For example, NOAA recently partnered with WHOI to develop autonomous, gliding recorders that have acoustic detection software on them which actively listens for North Atlantic right whales’ calls around the clock and automatically identifies them. This means we can respond to information on right whales quickly and direct research efforts aimed at tracking an individual’s health and the population’s abundance. In turn, this information is more quickly available to inform management measures. These health assessments are particularly critical right now because so few North Atlantic right whales are left.

Based on your research, how are North Atlantic right whales different from other whales?

From our acoustic monitoring and other tracking efforts, we know that North Atlantic right whales are a true coastal species, directly overlapping with the densest areas of human activity. This puts them at greater risk than other whale species like blue whales, which are more of a deep-water species. Like all marine species, they’re an important part of the ocean ecosystem. And having a healthy ocean is something I hope we can all aspire to and work toward.