North Atlantic right whales are in crisis and will go extinct if the current population decline is not reversed. Learn how NOAA and partners use aerial surveys to get updates on individual whales in this Q&A with Tim Cole, an aerial survey researcher. 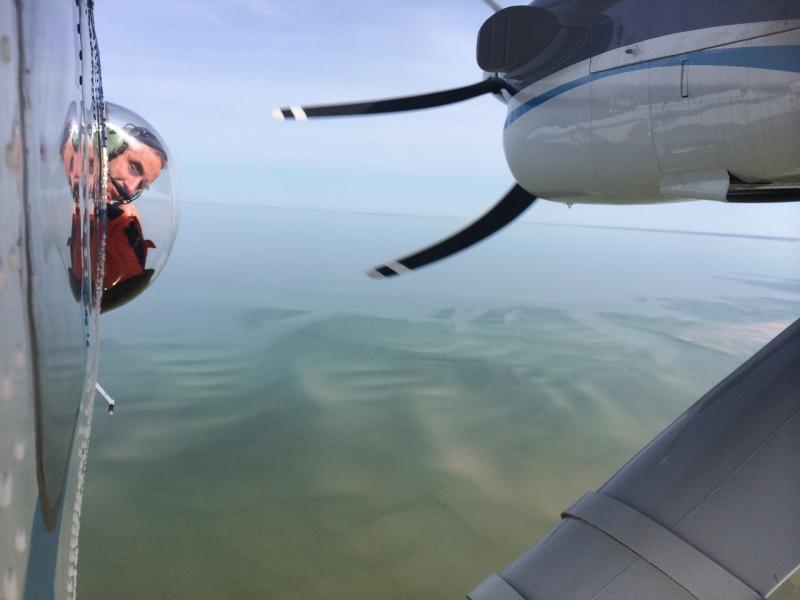 Editor's Note December 14, 2021: When we conducted this interview in 2018, there were an estimated 450 North Atlantic right whales left. The latest preliminary estimate suggests there are now fewer than 350.

North Atlantic right whales are endangered with only an estimated 450 individuals remaining in the population. Aerial surveys—where scientists aboard planes locate groups of whales to count and capture images of individuals—are one of the key ways NOAA and our partners gather scientific data on the status of the population and get real-time updates on individual animals.

Tim Cole works with a team of scientists who conduct surveys from aircraft to monitor North Atlantic right whales in the Northeast, providing valuable clues about their location, behavior, health and body condition, and population status.

What can you learn about North Atlantic right whales from aerial surveys?

The primary mission of the aerial surveys is to photographically “capture” as many individual right whales each year as possible, in order to monitor the population as a whole. Using the unique rough skin patches on the head of each whale (known as callosities), we can track their presence over time. These data are used in models that estimate the total number of whales in the population.

Because North Atlantic right whales move over a large range—along most of the eastern seaboard of the United States and Canada—finding them in order to record their numbers is a challenge. Aerial surveys aboard NOAA’s Twin Otter aircraft allow scientists to stay offshore long enough, and over large enough areas, to sight significant numbers of whales each year. The flight crew from NOAA’s Office of Marine and Aviation Operations are also integral to this mission.

In addition to monitoring the population status of North Atlantic right whales using photo identification, aerial surveys can sometimes provide real-time information on individual whales that are sick, injured, entangled, or in trouble in other ways.

Spotting entangled whales and alerting the disentanglement response network is the first step in a process that sometimes leads to a life-saving intervention for an individual whale, like that of frequent-breeding female Kleenex. If a whale is successfully disentangled, we can help monitor the animal over time to see if it has recovered from any injuries. We are also able to alert commercial mariners to the presence of right whales in busy coastal waters so they know to slow their ship’s speed or avoid the area and thus potentially avoid fatal collisions. We are also sometimes called in to help relocate dead whales drifting offshore. Whenever possible, NOAA and stranding team partners tow whales to shore to perform necropsies in order to identify the cause of death. Knowing the sources of mortality helps managers focus conservation efforts.

How has technology changed the way you study North Atlantic right whales?

When this mission began years ago, Coast Guard helicopters patrolled shipping lanes into Boston to monitor for the presence of right whales. But due to the Coast Guard’s broad mission, the helicopters often needed to divert to other activities, and their endurance was limited offshore.

We now conduct the aerial surveys using NOAA’s Twin Otter aircraft, which are ideally suited to this mission. They offer great visibility and can travel long distances offshore.

One way we’re enhancing our sighting data is by using passive acoustics to listen for whales. My colleagues at the Northeast Fisheries Science Center use underwater gliders and digital acoustic monitoring instruments to determine where right whales might be located under the surface, which then helps us home in on where we can spot the greatest number of individuals. It’s like getting help finding the needle in the haystack.

We’ve also just started using sonobuoys, originally used by the Navy, that we can deploy from the Twin Otter planes once we come upon a group of North Atlantic right whales. The sonobuoys transmit sounds made by the whales to a recording system on the aircraft via radio. So we can now see and hear the whales we’re studying at the same time, which helps researchers figure out how whales use sound in different areas and when different individuals are present.

The North Atlantic right whale is a sentinel of oceanographic shifts, and we are seeing a shift in their distribution. We still don’t know what this means, but we do know that it is happening at the same time that ocean temperatures off New England and Canada are changing, as are the movements of copepods—the primary prey of right whales.

North Atlantic right whale distribution also overlaps with many human activities. Actions and noise related to fishing, shipping, and offshore energy development along the East Coast all have a ripple effect on this endangered species. It makes my work, and the work of all the partners involved in right whale conservation, extremely challenging and important as we move forward into another year of monitoring.