Scientists to complete genomes of six cetaceans this year, for nine out of 14 families. 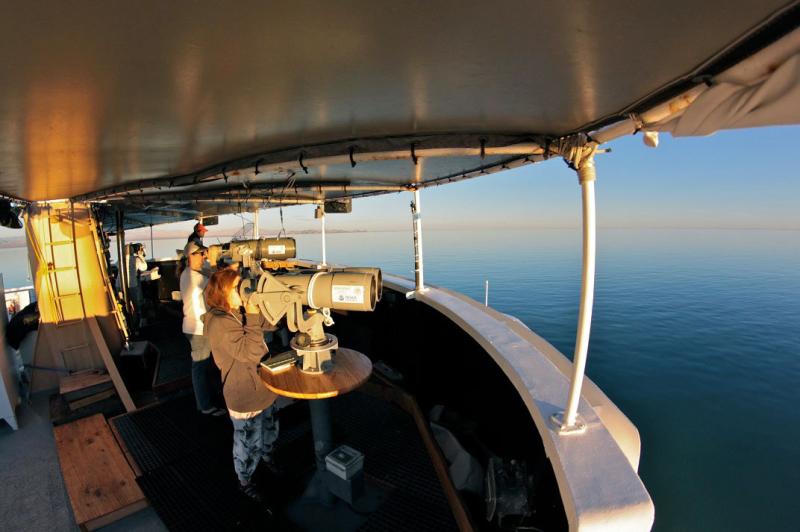 Teams survey the Gulf of California for signs of the highly endangered vaquita, a small porpoise driven toward extinction by gillnets that entangle and drown them. Sequencing of the vaquita genome has provided insights on conservation of the species. Photo: NOAA Fisheries.

The next-generation of genetic analysis is rapidly increasing the value of tissue and DNA collections that federal scientists have quietly amassed over many years. These collections are now revealing new species, conservation insights, and details to guide modern-day management.

The revelations are coming faster—and at lower costs—than ever before, using samples collected years or even decades ago. They include the sequencing of an increasing number of complete genomes of cetaceans, including highly endangered species such as the Gulf of California’s small porpoise vaquita. Newly recognized details of the vaquita’s genome have offered hope for conservation of such small populations.

The vaquita genome is one of 16 newly completed high-quality “reference genomes” featured in a special issue of Nature this week. The issue highlights the Vertebrate Genomes Project, a global initiative to sequence genomes of all vertebrate species. The Cetacean Genome Project, a contributing project supported by NOAA Fisheries, facilitates the sequencing of reference genomes from more than 90 recognized species of whales, dolphins, and porpoises.

Researchers expect to complete at least six more cetacean reference genomes this year, representing a total of nine of the 14 cetacean taxonomic families. NOAA Fisheries researchers, in collaboration with the Vertebrate Genomes Project, have also sequenced reference genomes of endangered leatherback and green sea turtles. Assembling the genomes of marine species such as cetaceans can take decades. Some species are so scarce they are rarely available for biopsies or found as fresh carcasses.

“Completing the high-quality genomes is a collaborative achievement all by itself,” said Phil Morin, a research geneticist at NOAA Fisheries’ Southwest Fisheries Science Center and leader of the Cetacean Genome Project. “Yet assembling the reference genomes is really just the first step in building the genomic infrastructure to improve and expand what genetics can tell us about these and related species.”

A separate National Marine Mammal Tissue Bank and the Alaska Marine Mammal Tissue Archival Program is maintained jointly by NOAA Fisheries and the National Institute of Standards of Technology. It has more than 100,000 aliquots of marine mammal tissues, which are similarly gaining value. Scientists have learned how to tease more and more information from samples—often no larger than a pencil eraser—that have been collected and stored since the 1980s.

”The partnership with the National Institute of Standards of Technology provides the long-term preservation of representative marine mammals samples for evaluation as a valuable component of real-time monitoring and basic research. The data also enables investigators to extend their research into the past revealing historical insights about these modern species.” said Teri Rowles, NOAA’s Marine Mammal Health and Stranding Response Program scientist. “The Tissue Bank partnership was established with a focus on contaminant and health evaluations but samples are also valuable for other analyses particularly in the area of genetics, genomics, metabolomics, and epigenetics.”

“More powerful analytical methods make it possible to go back to these samples and now, for example, test the longstanding question of whether bottlenose dolphins on the East Coast are one species or two. They may also be used to retrospectively detect details of viral outbreaks that are thought to contribute to occasional dolphin die-offs,” said Patricia Rosel, a research geneticist at the Southeast Fisheries Science Center.

Rosel and her colleagues identified a unique lineage of whale in the Gulf of Mexico based initially on genetic samples. Some samples were extracted from tiny bits of a museum skeleton dating to the 1950s. The catch was that new marine mammal species are usually defined through more than just genetics: they needed another piece of evidence.

“The genetics told us it existed, but morphology is the traditional method for identifying new species,” Rosel said. “An intact specimen from the Gulf of Mexico was still lacking.”

They finally got their chance to examine that morphology—the physical characteristics and measurements—in 2019. One of the animals, now known as Rice’s whale, stranded near the Everglades. The genetics matched the earlier study, and the different measurements and shapes of bones in the skull also definitively identified it as a new species.

“When you collect and archive these tissues, you cannot know what information they may provide in the future with new tools and techniques,” Rosel said. ”That’s why they’re so powerful—and so important to preserve.”

Genetic sequencing of samples from the Southwest Fisheries Science Center tissue collection in 2016 helped identify a new species of rare beaked whale. In 2019, sequencing revealed that fin whales in the Pacific are a different subspecies. These findings can help ensure that conservation strategies account for the genetic diversity within and between the subspecies.

Much of this research has been possible due to the dedication and collaboration with hundreds of research partners and Marine Mammal Stranding Network members. They have collected these samples over the decades and contributed them to the various archives across the country.

Researchers say that high-quality “reference genomes” like those featured in the new issue of Nature have special value. They represent a “platinum standard” of quality and completeness that can help fill in gaps and correct errors in the genomes of other animals. They can also dramatically reduce the cost and complexity of more basic genome mapping across populations and of closely related species.

The emerging details indicate that some now-endangered species, including vaquita, have persisted in relatively small numbers over time without inbreeding problems.

Rapidly increasing computing capabilities have supercharged genetic research by processing vast amounts of genetic and genomic data quickly. It is becoming increasingly possible to identify genetic material from other life forms that may themselves be hidden in marine mammal or turtle tissue samples. These could include disease organisms or the many bacteria species that dwell in different parts of animals, said Alaina Harmon, manager of the tissue collection at the Southwest Fisheries Science Center.

That makes the bits of tissue “ecological time capsules” that reflect “that individual animal of that species on that day at that place,” and may go beyond basic species identification. Harmon noted that the collection is increasingly storing samples containing environmental DNA (eDNA). For example, a sample of ocean water from a specific place and time when a marine mammal has passed by and may have left genetic traces in the form of DNA that can be sifted from the water.

Tissue collections, Harmon said, “are more about the future than the present. There will always be more to come later—if they are well taken care of.”

Last updated by Southwest Fisheries Science Center on May 19, 2021