How NOAA Preserves the Habitat of Seafood in the Pacific Islands

From protecting essential fish habitat to recovering coral colonies that have detached from the reef, NOAA supports seafood habitat in many ways. 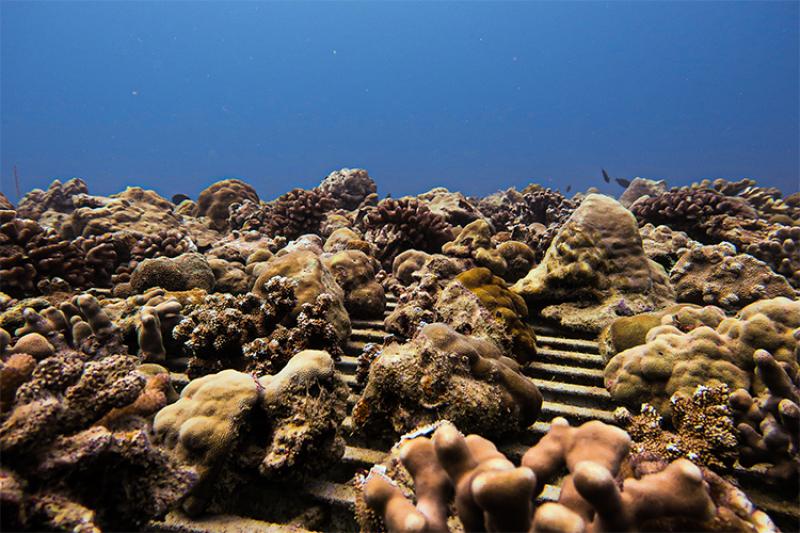 Coral nurseries are one tool NOAA uses to restore reefs, which are vital habitats for many managed seafood species. Credit: NOAA Fisheries

Did you know that in Hawaiʻi, state regulations specify that you can only keep the ulua (giant trevally) you catch if it’s at least 10 inches long? Or that federal regulations place annual catch limits for Pacific bigeye tuna in fisheries across American Samoa, the Commonwealth of the Northern Mariana Islands, Guam, and Hawaiʻi?

Regulatory conservation agencies use a number of tools like size and catch limits to make sure our seafood is around for future generations to enjoy. But these approaches mean little if the animals have no place to call home.

That’s why NOAA Fisheries works hard to also protect the habitat of the seafood species we eat. We’re engaged in numerous habitat management initiatives in the Pacific Islands region. Our work ranges from minimizing habitat impacts from federal projects to working with partners to actively maintain and restore habitat. Here are five examples of ways we’re preserving the habitat of our Pacific Islands seafood.

Essential fish habitat refers to the areas that federally managed fish and other organisms need to reproduce and survive. An EFH designation ensures that coastal or marine activities funded, permitted, or conducted by federal agencies maintain essential fish habitat.

Take uku (blue-green snapper) in Hawaiʻi as an example. During its larval stage, uku lives in the water column, near the shore and out in the open ocean. Juveniles and adults typically live in nearshore habitats close to the seafloor, around reefs and manmade structures, such as piers and shipwrecks. All of these areas are considered EFH.

Before undertaking projects that may directly or indirectly harm these areas, federal agencies must consult with NOAA Fisheries. These consultations gauge potential impacts to uku EFH and associated species such as uku’s major prey. The consultations also identify potential measures to avoid and minimize harm to EFH, and to replace EFH that is unavoidably injured.

We’ve collaborated with various partners in Guam, such as the Natural Resource Conservation Service, Guam Department of Agriculture, and the village of Merizo, to conduct habitat restoration activities. These included: 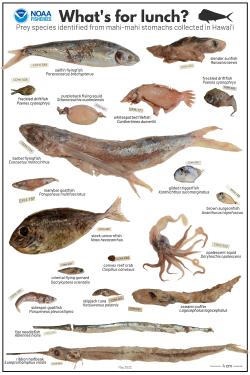 Our seafood requires its own source of food to survive, and that food requires a healthy habitat to thrive. So if a seafood species lives out in the open ocean but feeds on fish from nearshore habitats, those habitats should also be protected.

To refine the areas we need to preserve, we’ve been conducting diet studies to determine what, exactly, our seafood eats. In some cases, we’ve enlisted the help of local fishermen to get this information. In one project, we asked fishermen to provide our scientists with stomachs of the mahimahi they catch.

From the stomachs received, we’ve learned that mahimahi eat juvenile reef-associated fish. While these fish live in coral reefs as adults, their larvae drift out to sea and develop into juveniles in the open ocean. They can become prey of mahimahi while on their way back to the reef.

If mahimahi rely on these reef-associated species for food, protecting the coral reef habitats where those species mature and spawn could help maintain mahimahi populations.

All shallow coral reefs in the Pacific Islands region are considered EFH for many managed species. Ships occasionally run aground on these sensitive ecosystems, and the impact can directly damage reefs. Ships can also spill oil, potentially killing reef-associated species in and beyond the impact site.

When a grounding occurs, NOAA Fisheries joins local and federal agencies in a coordinated response to minimize the damage to natural resources. Such was the case in 2017 when a commercial fishing vessel named Pacific Paradise ran aground nearly a quarter of a mile off Kaimana Beach in Waikīkī, Oʻahu.

The response partners quickly worked to assess the situation and create a plan of action, which included:

When a ship grounds on a reef, coral fragments break off and scatter on the seafloor. These fragments will die if they’re not recovered and reattached on site or rehabilitated in a coral nursery. However, by growing recovered corals to a decent size, we can plant them back onto reefs that need them.

Sometimes corals detach from reefs due to powerful storms. When detached corals are too big for traditional coral nurseries, which typically grow coral fragments measuring just 4 inches long, a temporary recovery structure is needed. NOAA Fisheries partnered with University of Hawaiʻi mechanical engineering students to develop a new kind of coral nursery that could hold these large detached colonies. The result is a 5-foot-tall, 20-foot-wide hexagonal platform with 12 sturdy legs, made out of a strong fiber-reinforced, corrosion-resistant polymer. The coral nursery was designed to take on healthy, fully-formed coral colonies up to 24 inches.

In 2018, we worked with partners to place the structure into 60-foot-deep water near the Honolulu Airport Reef Runway. We loaded it up with more than 500 detached corals from a nearby area. Over time, these corals recovered, and we planted them on the reefs—vital habitat for much of our seafood.