Interview with a Habitat: Oyster Reef

Oysters are terrific multitaskers. We recently sat down with an oyster on a restored oyster reef in the Chesapeake Bay to learn about its many roles. 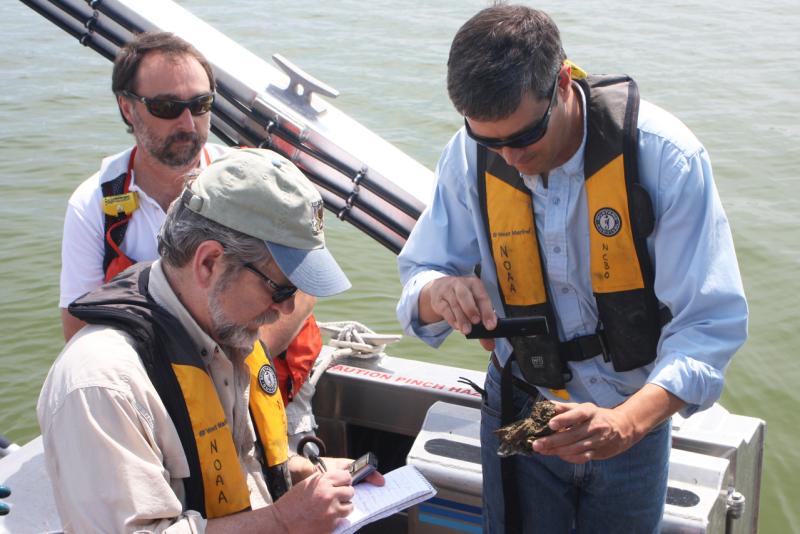 We’re talking with an oyster reef in Harris Creek, Maryland. Thanks for being with us--can you tell me a little more about where we are today?

Thanks for taking the time to swing on by! We’re in Harris Creek--it’s part of the Choptank River Complex on the Eastern Shore of Maryland, which is just a quick swim for some of my fishy friends out to the Chesapeake Bay. I love where I live, and I agree with NOAA that it’s a really special place. That’s why they decided to call the Choptank one of their Habitat Focus Areas!

So, how do you spend your days?

Well, I may not go anywhere--I have essentially cemented myself to this reef structure along with thousands of my buddies--but I stay really busy. I’m a filter feeder--I feed on plankton by opening my shells and pumping water through my gills, trapping my food. I can actually filter 50 gallons of water every day. Along with the food I want, I also end up trapping sediment, excess nutrients, and sometimes chemical contaminants. I’m not a picky eater.

What’s your favorite part of your job?

It’s very social. Not only do I spend all my time with my fellow reef-based oysters, but a bunch of different kinds of fish and crabs and other friends like invertebrates stop by all the time. They like to hang out near us reefs, as we help keep them safe from bigger predators like bigger fish and sometimes even humans with fishing rods.

What are some of your biggest challenges?

We oysters have had a hard time in the Chesapeake Bay for quite a while--there are only about 1 percent as many of us as there used to be. Humans like to eat us. Yes, really. Not all of me, of course, not my shell, just my soft squishy insides. Sometimes with lemon or cocktail sauce, sometimes cooked...well it’s a pretty scary concept. Apparently we are super tasty, so a lot of us have been taken from the waters and eaten over the years.

Also, we do get sick sometimes--there are diseases like Dermo and MSX that can hurt us. And when there’s not enough oxygen in the water, well then that’s pretty bad, too, as we can’t just swim and find a better spot like those lucky fish can. And I’ll admit we can be a little picky, too--we prefer a little saltier water for when we reproduce.

Cleaning the water, helping fish and crabs, and being a tasty treat (sorry) are all important things. Is anyone doing anything to help there be more oysters?

Thankfully, yes. NOAA and some partners are working together in a bunch of places around the Chesapeake Bay to do just that. The Chesapeake Bay Program has decided to restore oyster reefs in 10 tributaries by 2025. Where I live--Harris Creek--was the first place where they decided to do this. All told, I’m part of more than 350 acres of restored reefs, thanks to that effort. But none of the oysters on the restored reefs where I live will be eaten, as we live in what’s called a “sanctuary” where people can come and catch fish and crabs, but they’re not allowed to take us.

Where do you see yourself in five years?

Remember, I can’t swim; I’m stuck to this reef. Okay, but seriously? I want to be right here, doing the same thing. Filtering stuff out of the water, and helping out by being a place for fish and crabs to hang out. With a lot of my friends and family. The folks at NOAA come by and check on how the restored reefs are doing every few years, to make sure enough of us are still alive and that the structure of the reef--essentially, our city--is doing well. They do that by using sonar equipment, divers, and patent tongs, so they don’t bother us much at all. So far, we’re doing really well. My reef was built in 2013, and when they checked on us in 2016, 97% of us met their standards!

With such an important job, do you ever get to go on vacation?

Well, I used to. We oysters would get to vacation--as in, we wouldn’t get harvested--in the months that don’t have an “r” in their name. Turns out it’s because people didn’t like to eat us then because our quality was not as good right after we spawned, and back in the older days we would spoil without refrigeration during those warmer months. But now, oysters that are grown by aquaculturists can sometimes be harvested in the summer.

What other habitats do you admire?

I’m impressed by wetlands; like us, they filter the water a lot.

Seems like you oysters are pretty spunky and determined; that if we give you a chance you might do pretty darn well. What can I do to help?

When we’re really young--just little larvae floating on the currents in the Bay--we need to find good places (like this reef here in Harris Creek) to settle on. The people who are trying to restore oysters build reefs for that purpose, and they use a bunch of different things to do that. Sometimes they use stone, sometimes they use a bunch of different kinds of shell. As it turns out, oyster shell is in pretty short supply. So if you eat some of my friends and family, please recycle their shells. If you do that, I’ll forgive you for eating us. And if you have a dock or access to a pier, you can help grow baby oysters, too, that would then get planted on a reef. Places like Marylanders Grow Oysters and the Chesapeake Bay Foundation have programs for that. Thanks for your help!

Last updated by Office of Habitat Conservation on July 10, 2019