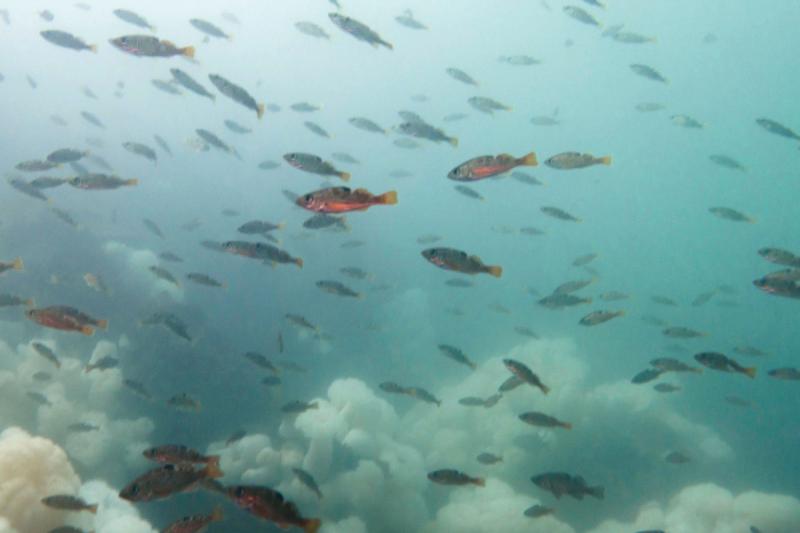 A large school of young-of-the-year rockfish swims off Whidbey Island in Washington. Photo by Tabitha Jacobs-Mangiafico

Counting fish can be difficult. Fish move, hide, and reproduce; they eat and are eaten. Many have evolved coloration patterns and body shapes that help them avoid being seen. The small size of young fish makes them especially hard to see. They may show up at inconsistent times and places, or not at all, depending on unpredictable environmental conditions.

This was the quandary rockfish experts faced in 2017. The federal recovery plan for bocaccio and yelloweye rockfish in Puget Sound called for annual surveys of the endangered rockfish produced that year, also known as young-of-the-year fish.

Very little is known about how young fish join rockfish populations in Puget Sound, a process called recruitment. Sometimes few fish recruit into the population, despite adequate abundance of reproductive adults. When climatic and oceanographic conditions align, however, rockfish recruits arrive in near-shore habitats in great abundance. Understanding the conditions that lead to these boom years is key to developing management actions to protect and recover rockfish in the region.

That still left the difficult question of how to count tiny (less than 10 centimeters long) rockfish recruits throughout Puget Sound. The best option for NOAA was a collaborative effort with partners throughout the region, including community scientists who are also scuba divers. Scuba diving offers the opportunity to observe fish directly, including taking photos, with minimal disturbance or disruption of their behavior, and no mortality.

The Northwest is home to thousands of recreational divers, though many may enter the water only a few times a year. However, some of these divers explore the chilly, emerald waters more often than most scientists. This gives them intimate knowledge of dive sites and the patterns of their denizens. In 2014, NOAA Fisheries and multiple local institutions built upon an adaptive survey methodology historically used by the Washington Department of Fish and Wildlife to allow divers to collect rockfish data. The expectation was that these data could help promote recovery of rockfish at large, and fill a data gap for endangered yelloweye and bocaccio in particular.

There was just one additional challenge: how do you reach these divers to invite them to join the effort? “We decided early on we had to build this program slowly and search for the right people,” says Adam Obaza of Paua Marine Research Group, who has led the program since its inception. “For this project to be meaningful, it needs to last decades, and that requires sustained interest.”

The program built a small corps of divers from local groups such as Harbor WildWatch and the Emerald Sea Dive Club. Every year since the program’s inception, this effort by citizen scientists has increased. In 2020, the divers completed their 1,000th transect, which is a predetermined course over which they observe and count fish. That transect involved a 38-minute inspection of a rocky reef in South Puget Sound on December 12 that identified seven young rockfish.

Project leads are quick to point out that this effort differs from a traditional community science program. “I think for the amount of data we need to collect, citizens need to be a significant component of the effort, but we also work with all manner of partners including non-profits, government agencies, and academic groups,” says Amanda Bird of Paua Marine Research Group, who has been part of the program since 2018. “It’s an opportunity for our citizen-partners to see that they are taking data on par with professionals, and they are every bit as valuable in taking action to restore rockfish in Puget Sound.”

The data back her up. Citizen divers often send photos from their dives, which help project organizers quantify their accuracy. For example, a partner recently reported hundreds of young of the year rockfish at a site off Whidbey Island. It was the greatest number reported for any transect thus far. That partner had a camera with her and shared a photo, verifying her report. While identifying young-of-the-year rockfish to species can be difficult under field conditions, these photos demonstrate that assignments from citizen scientists are comparable to those of professionals. Overlapping surveys between citizens and project leads also increase confidence in the data. “We know they know what they are doing,” says Bird, “but it’s nice having the data to support you.”

In the end, this program is all about the data, Obaza says. The longer it continues, the more powerful the data will be. “Because the program was initially created to track jackpot years and their causes, there can be an impression we won’t be able to say much until decades have passed. That isn’t true. The applications are diverse and growing each year,” notes Obaza.

“We’re grateful to each and every diver who has volunteered time to help collect this valuable data,” said Dayv Lowry, Rockfish Recovery Coordinator in NOAA Fisheries’ Lacey Office. “Their commitment, enthusiasm, and local expertise are key to collecting crucial information we would not otherwise be able to obtain.”

The dataset can now begin to answer questions about habitat associations, spatial dynamics, and potential causes of recruitment events. The answers may inform the regulatory process, restoration planning, and the general scientific understanding of Puget Sound. The program has already produced multiple reports, presentations at scientific conferences, and one peer-reviewed publication, with more on the way. These products will further rockfish recovery and commemorate the effort of many dedicated professionals and citizens.

Many other exciting additions to this program are on the horizon. One is a collaboration with Ocean Wise, which runs similar surveys in Canadian waters of the nearby Strait of Georgia. This will reveal a more comprehensive view of rockfish recruitment throughout the Salish Sea. Counting fish may be hard, but in Puget Sound a coalition of dedicated partners is rising to the challenge.