Scientists work to identify potential impacts of tour vessels on harbor seal populations in the bay. 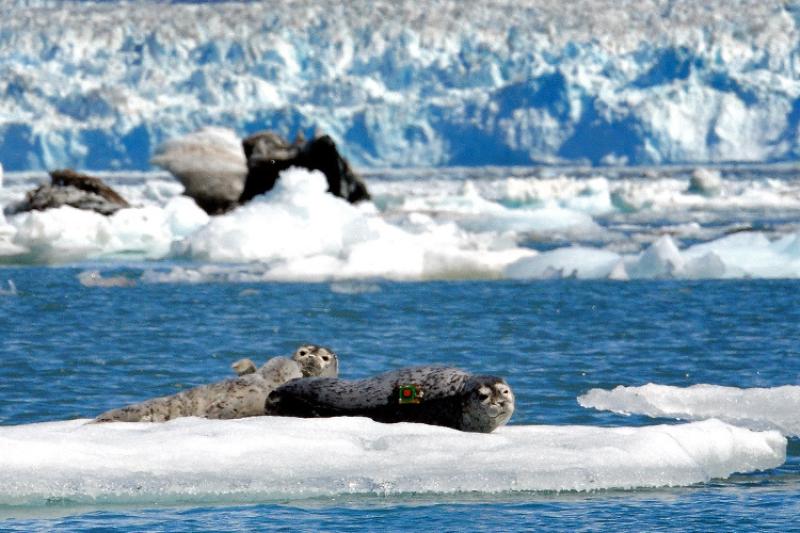 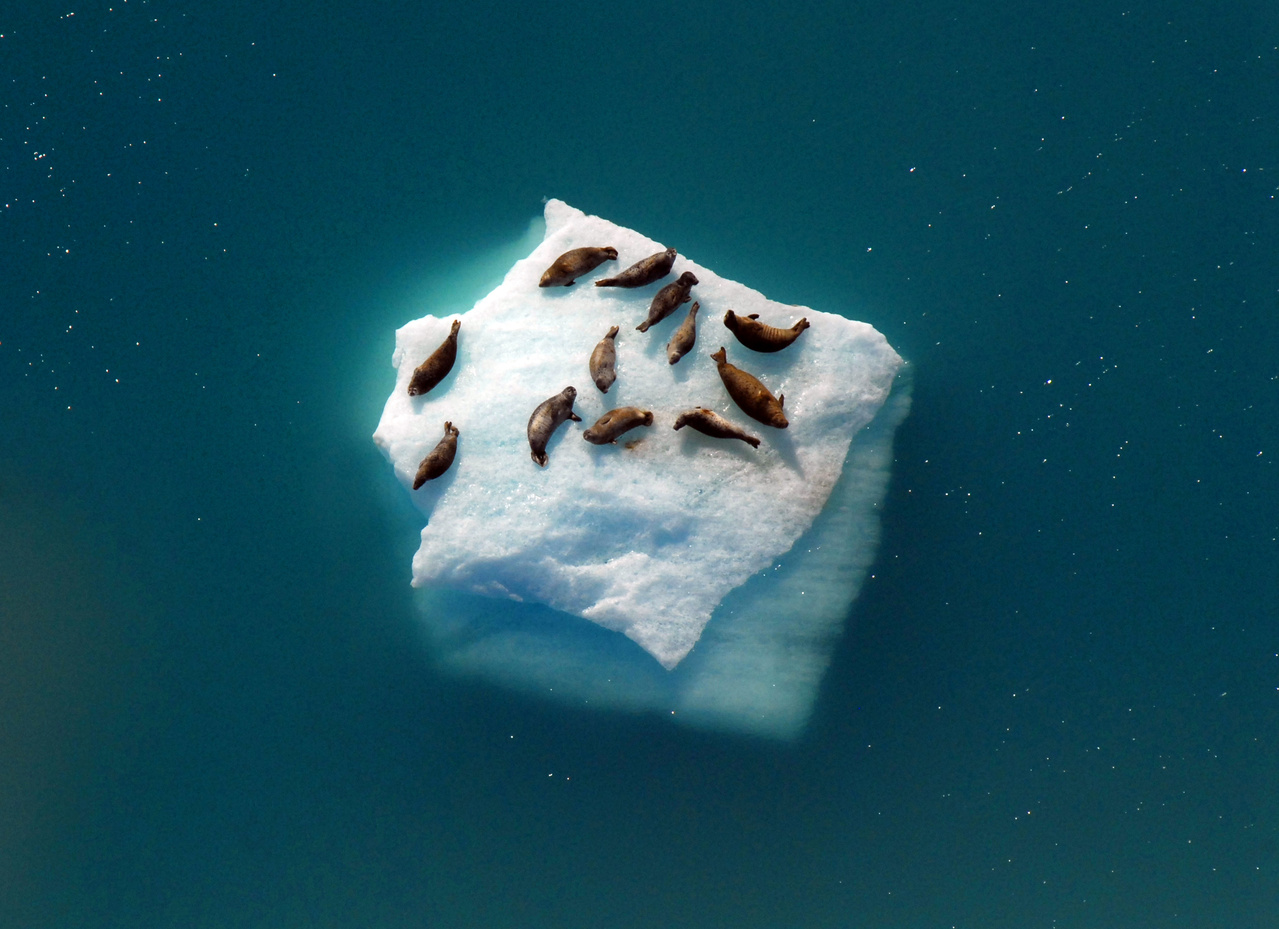 Seal pups tracked with satellite tags from Disenchantment Bay, near Yakutat, Alaska, traveled remarkable distances of more than 300 nm to Prince William Sound and Southeast Alaska. Scientists from NOAA Fisheries and National Park Service’s Glacier Bay Field Office reported these preliminary findings in a recent study to identify potential impacts of tour vessels on harbor seal populations in the bay. Over the next year, scientists will be analyzing data collected over the past two years and developing statistical models to better understand these impacts.

“In June 2016 and 2017, we worked with fellow biologists from the National Park Service to capture, sample, and attach satellite-linked transmitters to 73 pups and two mother harbor seals hauled out on glacial ice,” said NOAA Fisheries project lead John Jansen.

Vessel routes and speed upon entering the study area were tracked in both years using a vessel tracking station installed on Haenke Island. Coupling vessel data with behavioral and spatial data from the seals’ satellite tags will allow researchers to model seal and vessel movements to estimate the distance and time of closest approaches to seals by vessels, which will then be related to timelines of pup haul-out behavior (when they were in and out of the water).

Over the next year, analyses will focus on comparing the behavior of pups with and without ships present, and outside and within the path of vessels, to detect any differences in time spent submerged. Previous energetic models have shown that extra time in the ice-chilled water could compromise the capacity of pups to gain body mass (i.e., blubber) necessary to support them in the first months of independence. Resource managers and tour vessels can use information from these studies to evaluate whether mitigation is needed and to inform development of specific mitigation measures as appropriate.

A History of Study 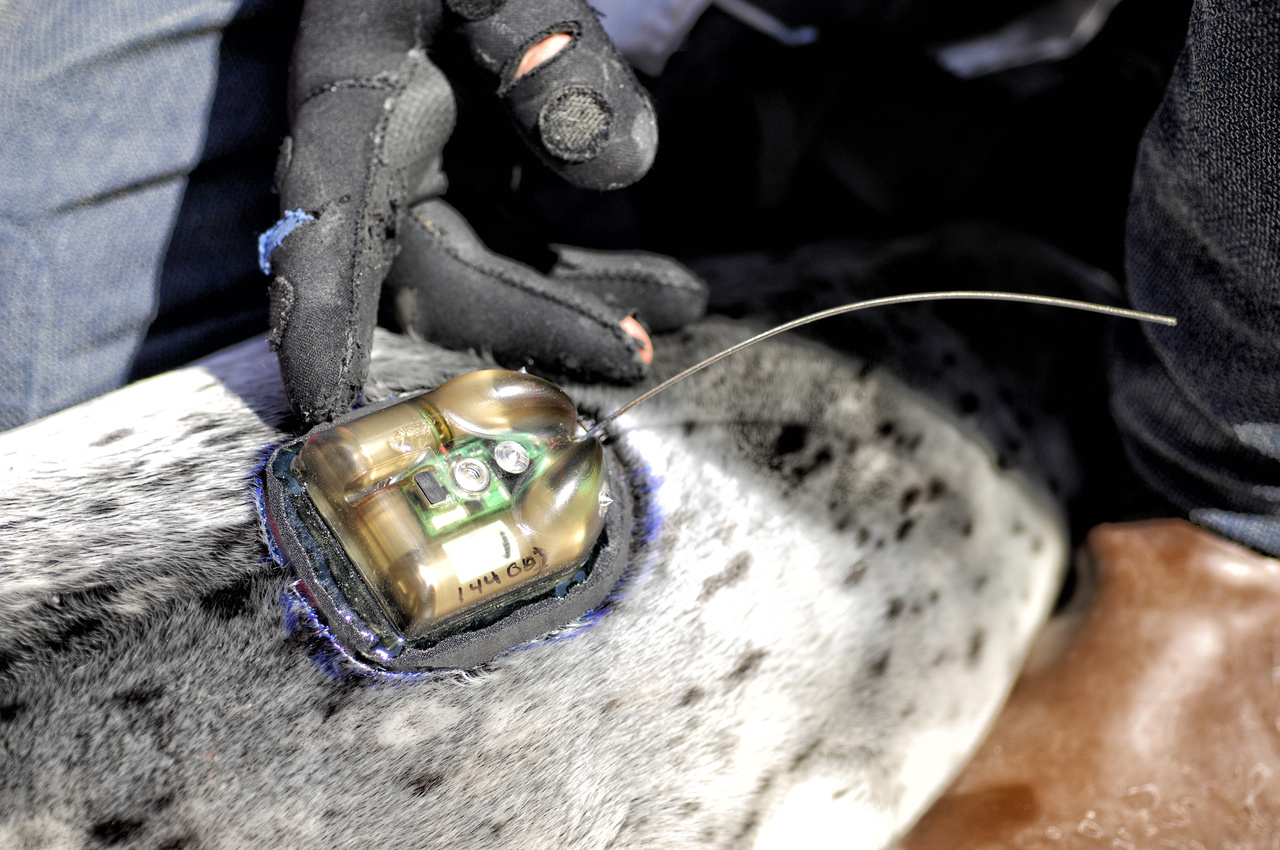 A tagged harbor seal pup is readied to be released back into Disenchantment Bay, Alaska.

Tour ships have been plying the icy waters of Disenchantment Bay for over a hundred years to glimpse the Hubbard Glacier. NOAA Fisheries first began surveying harbor seals that haul out on glacial ice in Disenchantment Bay back in the early 1990s. Within ten years, the local Tlingit Tribe of Yakutat raised concerns about the dramatic increases in visits by tour vessels to the seals’ glacial-ice habitat - 10-fold in the last 30 years - and potential effects on their cultural traditions of seal hunting. They were concerned that encountering fewer seals was the result of ship traffic particularly during sensitive times such as when moms are nursing pups on the ice.

Starting in the early 2000s, NOAA Fisheries studies focused on developing the methods to get accurate counts by aerial survey of seals scattered across the large and dynamic ice field so that the population could be tracked long-term. Short-term, these surveys would help test whether any changes in abundance or distribution could be attributed to vessels. So far, analyses haven’t shown any marked shifts in abundance or space-use by seals but the more reliable counts didn’t come until after the suspected declines may have occurred. NOAA Fisheries biologists also made thousands of observations from tour ships, showing that seals on glacial ice were reacting to ships by flushing into the water as far out as ¼ mile. 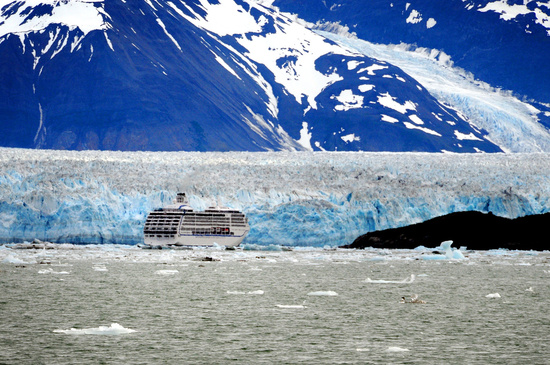 Cruise ship near the Hubbard Glacier in Disenchantment Bay, Alaska.

NOAA Fisheries biologists looked specifically at the threat to pups being disturbed into the water and what might be the energy cost of more time in the ice-chilled water. They constructed energetic models, which suggested that even a modest increase in time submerged could force pups to trade body mass for body temperature, a gradual process that could impact their survival and ultimately lead to a population decline. More recently, NOAA Fisheries scientists were able to use these results to estimate disturbance across aggregations of seals present when a ship visits the bay, showing that a single vessel can cause up to 14% to flush into the water. This effect is likely compounded when up to four ships visit on a given day. These results, in conjunction with findings from Alaska Department of Fish and Game, the National Park Service, and the Alaska Sealife Center, led to NOAA Fisheries’ decision in 2015 to develop guidelines for vessel activity in glacial areas to minimize disturbance of harbor seals. In 2016, to get at the question about pup survival, NOAA Fisheries partnered with the National Park Service to track pup behavior and vessel movements using the latest satellite tracking technology.

“With significant funding from the National Park Service, combined with a great crew and ship support, and a little luck with the weather, we got out 75 tags over two years on pups and a couple moms” said Jansen. “We’re looking forward to analyzing the data to help managers keep a sustainable balance between ships and seals, but also from a biological standpoint to learn more about these unusual glacial seals.”

In the fall of 2017, the team retrieved the vessel tracking system with data from Disenchantment Bay. Meanwhile, the last of the tagged pups ventured out into the Gulf of Alaska and hopefully will return back to the ice of Hubbard Glacier one day to reproduce.