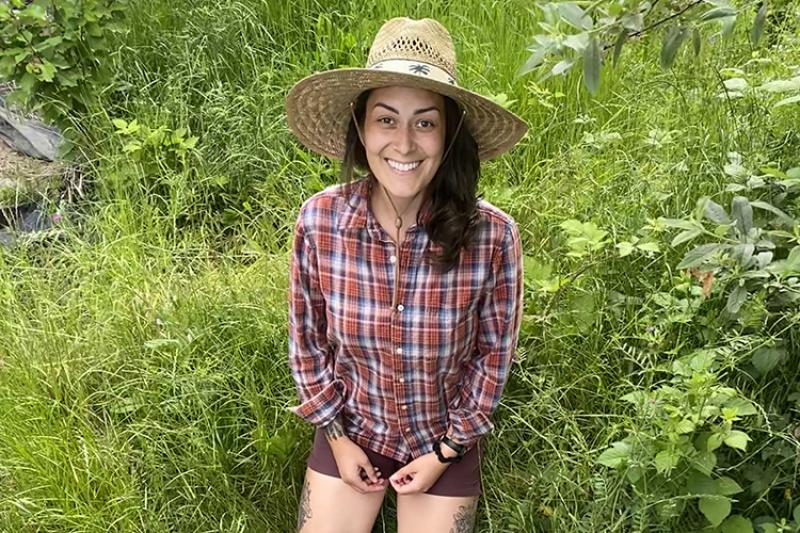 Former U.S. Air Force mechanic Matilda “Tillie” Smith is the latest to begin a NOAA Veterans Corps internship in Washington state. Along with laboratory and field work, she’ll be learning from researchers at the Puget Sound Restoration Fund. Her work is supported by NOAA’s ongoing partnership with the Washington Department of Veterans Affairs.

Tillie is excited to take on her new role. As a member of the Fond du Lac Band of Ojibwe in Minnesota, she developed a strong environmental ethic at an early age. She was inspired by her Grandpa’s outdoor wanderings, where he shared the “randomness and perfectness of nature” with her. The Fond du Lac Band is one of six Chippewa Indian Bands that make up the Minnesota Chippewa Tribe.

Now kicking off her Veterans Corps experience, Tillie looks forward to helping communities that depend on the sea. She’ll be restoring natural resources in the Puget Sound estuary, so they’re healthy for the indigenous people in the Pacific Northwest who depend on them. Her experience will include restoring Puget Sound’s bull kelp, the most commonly-found type of kelp in Washington and Oregon, and Olympia oysters. Both are important species foundational to the Sound’s entire marine ecosystem.

Before coming to Washington state, Tillie dedicated 6 years to the U.S. Air Force as an aircraft mechanic overseas. She was stationed in Germany and Japan and traveled widely. While in Europe, she fell in love with the powerful feeling she got from the Swiss Alps. That helped bring her to Washington and its mountains after leaving the military in 2016.

Since settling in Washington, Tillie’s environmental passions led her to an Environmental Studies degree in Tacoma at the University of Washington. She also had internships through Joint Base Lewis-McChord’s Fish and Wildlife Program and with the Center for Natural Lands Management at Violet Prairie. This next step in her career will help Tillie get more deeply involved in the marine environment to build on her experiences in terrestrial ecology.

Veterans Corps Partnerships in Washington and Other West Coast States

This collaborative internship program for veterans in Washington expands on other partnerships across NOAA Fisheries recruiting and training veterans in fisheries science. It helps build their experiences for opportunities in higher education as well as potential careers in the field. So far, the partnerships are showing success—veterans have been hired in key research and conservation roles at NOAA and its many partners around the United States.

The foundation of these partnerships in Washington began in 2016. NOAA Fisheries’ Office of Habitat Conservation and Northwest Fisheries Science Center joined Washington’s Veterans Conservation Corps to develop a science-based internship to support veterans in their STEM career pursuits.

NOAA appreciates the dedication of our armed service members to their mission. We’re proud to provide Tillie and other veterans with meaningful experiences in the natural resources field after their military duties are complete.

Currently our veteran conservation corps programs are in Washington, California, and Oregon, with programs opening in other states in the future. While each state’s focus is slightly different, they’re all based on common goals:

Last updated by Office of Habitat Conservation on March 10, 2021