Researchers attached video cameras to penguins and obtained some of the first footage of penguins synchronously swimming, diving, and feeding for several hours. 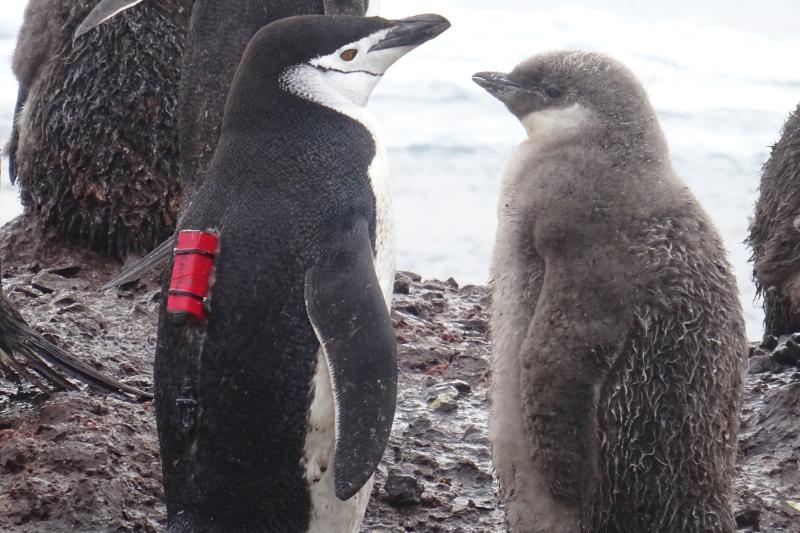 A penguin’s plumage is often compared to a tuxedo. The comparison is fitting, considering that new data suggest penguins may be holding dinner parties more often than we know. Seabird biologists from the Southwest Fisheries Science Center recently obtained video footage of a group of chinstrap penguins as they went to sea in search of food. They discovered that these birds may stick tightly together for several hours while hunting for prey. The videographers weren’t the biologists, but the penguins themselves.

The researchers observed chinstrap penguins at the Cape Shirreff field camp during the 2019 summer breeding season—December in the southern hemisphere. Dr. Jefferson Hinke, head of seabird studies for the center’s Antarctic Ecosystem Research Division, and his research team attached small video cameras and depth recorders to the penguins. Hinke’s goal was to study how penguins interact with their prey while they’re on the hunt. The cameras remained attached to the penguins for approximately 24 hours before researchers recovered them.

Diving for Food Together

The team got a happy surprise when they reviewed the video footage. They found that two penguins—both with cameras—in a group of three captured each other on video as they left the beach, swam, and repeatedly dove for food together during a single trip to sea. Their findings—some of the first to document synchronous diving and foraging in penguins—were recently published in the journal Marine Biology.

“I was super excited because it’s the first time I’m aware of that anyone has seen this on video,” said Hinke, lead author of the study. “All of the other observations of penguins diving together have occurred from other types of instruments. So we knew they were diving at the same time and maybe going to similar depths, but once they disappeared below the surface we really had no idea what they were doing. This was the first time we were looking at their synchronous interactions with prey.”

The two penguins with cameras—one male and one female—along with a third penguin with an identifying flipper band spent more than 9 hours swimming, diving, and feeding within sight of each other during the daylight hours of a longer foraging trip. They performed 85 dives together and mostly fed on Antarctic krill, the main prey item for chinstrap and other species of penguins.

What struck Hinke was just how coordinated the penguins were in their movements. The time they spent on the surface, how deep their dives were, how long they spent underwater, and how much krill they consumed while foraging together were notably similar among birds.

“That level of synchronicity was surprising,” said Hinke. “Animals dive and forage in groups—that’s not new—but we haven’t been able to look at it underwater before. They did this together from shore, out to a foraging ground, then dove and ate consistently for over nine hours and they were right on top of each other for that whole time. That kind of synchrony for that duration of time I found to be remarkable.”

Hinke believes that the high degree of synchrony among foraging penguins may represent some level of cooperation in feeding.  Penguins working together to feed may be able to capture more prey than they would if they were feeding alone. Sticking together in a group may also be a “safety in numbers” strategy. Leaving the beach together may help individual penguins avoid being eaten by leopard seals on their way out to sea. Remaining in a group at sea may also help them avoid being eaten by killer whales.

Foraging together is likely advantageous for penguins. However, Hinke acknowledges that the opposite may also be true if krill populations around the northern Antarctic decline, as the climate warms and fishing pressure increases. “You can imagine a scenario where krill might not be out there in the abundances that they once were, so these groups that are looking to forage together might fail together if krill swarms aren’t available,” said Hinke. “But I suspect, at present, that that’s not a likely outcome. I think these birds benefit from these relationships.”

Hinke plans to attach more cameras to penguins during the upcoming field season. He hopes to capture more synchronous diving events, as well as discover more about why penguins engage in this behavior.

“We don’t have a lot of data from other penguins to really untangle, for example, whether more experienced birds teach less experienced birds in situations like this,” said Hinke. “We’re just hopeful that we can continue to collect more data. If anything, it allows us to move forward looking at these kinds of synchronous group dynamics with an eye that we didn’t have before.”