The Antarctic Ecosystem Research Division provides scientific information for the conservation and management of the living marine resources in the ocean areas surrounding Antarctica.

We maintain two field stations on the Antarctic Peninsula, Cape Shirreff on Livingston Island and Copacabana on King George Island. When not in the field, our staff are located at the La Jolla Laboratory of the Southwest Fisheries Science Center. 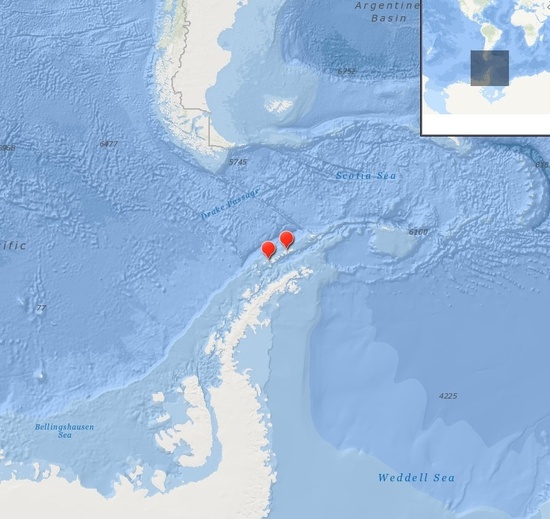 The Antarctic Ecosystem Research Division manages and implements the U.S. Antarctic Marine Living Resources Program. It is internationally recognized for its contribution to ecosystem-based management of fisheries in the Southern Ocean. Our studies focus on interactions between the environment, Antarctic krill and fish, predators that depend on krill and fish for food, and commercial fisheries. We use advanced technologies (e.g., autonomous gliders, unmanned aerial systems i.e. hexacopters, and animal-borne video cameras) to collect data. Our work is intended to support decision making by the Commission for the Conservation of Antarctic Marine Living Resources.

Learn more about our research in Antarctica.

The Pinniped Research Program at Cape Shirreff monitors the population status, reproductive success, and foraging ecology of Antarctic pinnipeds. We focus on species that are dependent upon Antarctic krill, such as fur seals.

Seabirds are reliable indicators of marine ecosystem status. The Seabird Research Program at Cape Shirreff and Copacabana focuses on the year-round interaction of penguins with their primary prey (Antarctic krill), changing environmental conditions, and the activity of the krill fishery.

The Krill and Oceanographic Research Program focuses on the link between prey production, prey availability, and climate variability in relation to predator and fishery demands. Researchers use long-duration acoustically equipped gliders and moorings to conduct surveys that monitor trends in krill abundance over time.

The Finfish and Benthic Habitats Research Program focuses on Patagonian and Antarctic toothfish (also known as Chilean seabass). We also focus on a considerable number of other demersal finfish species. These species serve as both important predator and prey components within the Antarctic ecosystem.

George Watters is the Director of the Antarctic Ecosystem Research Division and the U.S. Representative to the Scientific Committee for the Conservation of Antarctic Marine Living Resources. George has held both these positions since 2009 but has been active in Antarctic research since 1991, when he joined the Division as a first-year Ph.D. student at Scripps Institution of Oceanography, UC San Diego. George's research is primarily focused on issues that relate directly to ecosystem-based management of fisheries in the Southern Ocean.

Heidi Taylor is the Deputy Director for the Antarctic Ecosystem Research Division. Heidi began her NOAA career in 2005 as a Presidential Management Fellow. Prior to joining the Division, Heidi worked at the NOAA Fisheries West Coast Regional Office in the Sustainable Fisheries Division where she served in a variety of policy, advisory, and management positions related to highly migratory species.