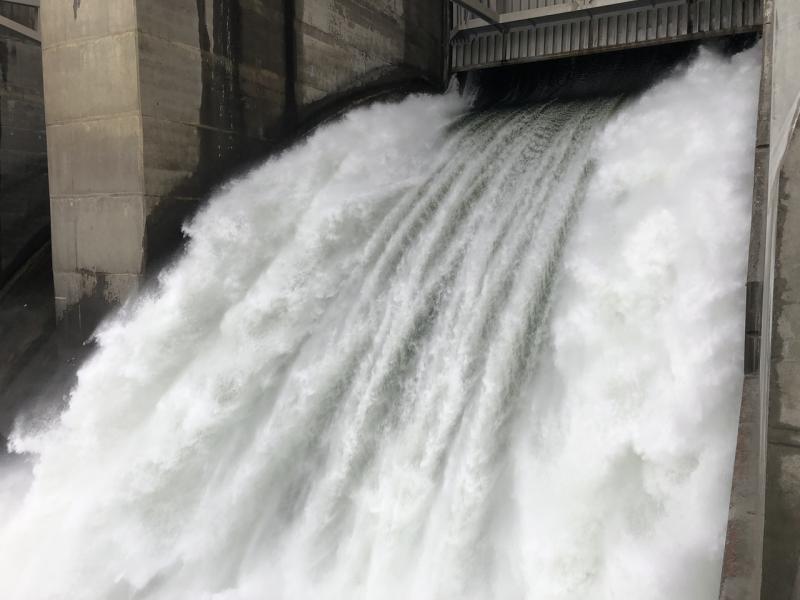 A new system is helping track salmon through federal dams on the lower Snake and Columbia rivers. It has detected more than 10 times as many juvenile fish in its first several weeks of operation as could have been tracked before, biologists say.

The system includes powerful new antennas embedded within the concrete spillway of Lower Granite Dam. They antennas collect data from tiny electronic tags implanted in juvenile fish. They signal the tags to transmit identifying information back to the antennas as water carries the fish past at roughly 50 miles per hour.

Biologists and engineers spent years designing the system. It is the first to detect fish passing through a spillway at one of the Snake and Columbia dams operated by the U.S. Army Corps of Engineers. Dam operators have increasingly released more water through spillways to carry fish downstream safely while avoiding turbines.

That has made it more important to track the fish going through the spillway at Lower Granite, the uppermost of the four lower Snake River dams. The passage data will increase the accuracy and precision of survival estimates for fish on their way downriver.

Understanding How Fish Move Through Dams

It is already revealing new details about how fish move through the dams. So far it has showed that during high spill periods more than 10 times as many fish pass through the safer route of the spillway as through the dam’s turbines for the same amount of water.

The new insights “will likely change how the dams are operated to improve passage and survival,” said Eric Hockersmith, fishery biologist with the Corps of Engineers. Corps Project Manager Jack Sands said the fish detection rate is exceeding expectations.

Antenna designers had to overcome technological challenges. They had to develop an antenna powerful enough to signal the tags through seven inches of concrete and collect the data within about 30 milliseconds. That is roughly three times faster than the blink of an eye. The spillway antenna system is the largest of its kind in the world.

“We can now tell with much greater confidence how juvenile fish move through the system and that helps us identify problems and opportunities to improve passage,” said Gordon Axel, a research fisheries biologist at the NOAA Fisheries Northwest Fisheries Science Center field station in Pasco, Washington. “This new technology is really proving itself.” 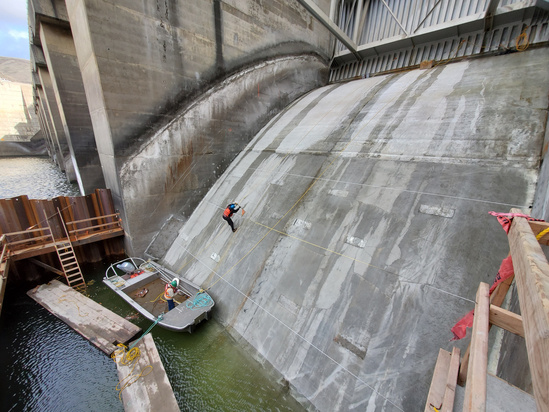 The system began operation in early April and by late April had detected more than 31,000 Snake River Chinook and more than 37,000 steelhead. This is compared to 3,800 Chinook and 3,400 steelhead previously detected passing through the juvenile bypass system at the dam. Screens deflect fish from the turbines and into the bypass system, which carries fish through a network of conduits past the dam.

The key to the system is the tiny electronic tags implanted in many juvenile fish migrating out of the Columbia and Snake River basins. They are called passive integrated transponder, or PIT, tags, like the tags that help identify lost pets. Antennas like the new ones in the spillway signal the tags to transmit a burst of data. This tells biologists where the fish came from and how fast they are moving toward the ocean.

NOAA Fisheries developed the new spillway antenna system with Biomark, a Boise, Idaho, company that specializes in PIT tag systems to track fish and wildlife. We also partnered with the Pacific States Marine Fisheries Commission. The Bonneville Power Administration and the Army Corps of Engineers funded development and installation of the $7 million system.

“We pushed the boundaries of what is possible with the technology, and we could not have done it without the partnership with Biomark and the other agencies,” said Gabriel Brooks of the Northwest Fisheries Science Center, who led the team that designed the system.

In its first weeks of use, biologists estimate the system has captured data from more than half of the PIT-tagged fish passing through Lower Granite Dam. Previously biologists could detect only the fish going through the bypass system, limiting detection percentages to the single digits. PIT tags implanted in fish in the Columbia Basin are logged in a public database operated by the Pacific States Marine Fisheries Commission. This allows researchers to freely access data on their movement, growth, and survival.

The spillway antennas also detected some adult steelhead passing downriver through the spillway. Those could be kelts, which are steelhead that migrate to the ocean and back more than once. Or, they could be adults falling back down past the dam while migrating upstream.

“We now have the ability to collect data on fish that historically would have been missed entirely, which gives us important new information to work with,” Axel said.