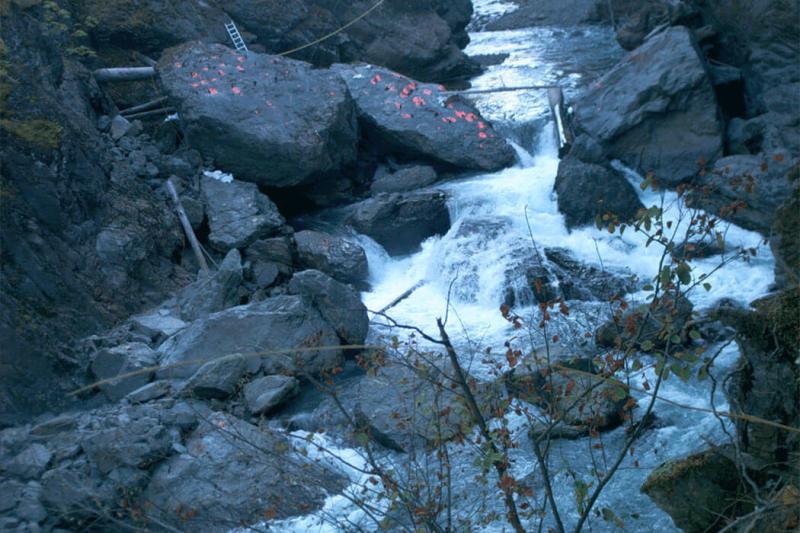 NOAA Fisheries’ West Coast Region recently played a key role in helping Olympic National Park fund the removal of massive boulders in the Elwha River that were blocking migrating salmon, steelhead and bull trout even after the landmark removal of dams on the river.

Comparisons with historic photos showed that a large rockfall had occurred along the river sometime after Glines Canyon Dam was completed in 1927 but before removal of the dam began in 2011. The rockfall sent boulders as much as 30 feet wide and weighing 1,000 tons or more into the river channel, slowing and changing the river’s flow.

Sediment from the dam removal built up above the giant rockfall, blocking fish passage again.

Scientists from the Northwest Fisheries Science Center worked with leadership in NOAA Fisheries’ West Coast Region to identify funding sources that might help address the problem. The West Coast Region eventually contributed $500,000 to help fund the removal of several of the large boulders that were blocking fish passage on the Elwha.

“Collaboration has long been a hallmark of Elwha River Restoration and we very much appreciate NOAA's ongoing support of the project," Olympic National Park Superintendent Sarah Creachbaum said.

The National Park Service contracted with Sealaska Constructors LLC to design and detonate seven controlled blasts that reduced about 14 large boulders in the river to rubble. The work took much of September and early October to complete. Most of the boulders weighed more than 1000 tons and were significantly larger than the river could move downstream on its own, even during high flows.

“This is a great example of agencies working together to make the most of their resources to move mountains for fish, quite literally in this case,” said Will Stelle, NOAA Fisheries’ West Coast Regional Administrator. “Too much work has gone into restoration of the Elwha to let these boulders stand in the way. We appreciate the partnership with the National Park Service.”

Chinook salmon, steelhead and bulltrout are known to have migrated above the Glines Canyon site, with some reaching as far upstream as Geyser Valley. Removal of the obstructing boulders will further restore the river channel through Glines Canyon, promoting continued restoration of the Elwha River.